Master Builders House hotel is a hotel steeped in history, located in a beautiful setting on the banks of the River Beaulieu in the New Forest. It might sound like something out of Lego Masters, but the Master Builders name comes from the hotel’s 18th century shipbuilding past, when ‘Britain ruled the waves’. A stay here is to step back in time to be immersed in history while enjoying a lovely relaxing New Forest break.

Master Builders House, as the name suggests, is the former house of Henry Adams, the master shipbuilder who lived here from 1744 to 1805 and oversaw the building of over 50 ships for the Royal Navy, including Nelson’s favourite ship, the Agamemnon.

The building was constructed around 1729 and since 1925 it’s been a hotel, originally called the Shipbuilders House. Among the visitors to the hotel in the 1920s was Queen Mary who visited during Cowes Regatta week, and fittingly, during the Second World War the hotel was taken over by the Admiralty. Nowadays the hotel is owned by Hillbrooke Hotels which owns several historic hotels and pubs. With 26 bedrooms, a AA rosette restaurant, its own pub, large beer garden and views overlooking the Beaulieu river, Master Builders House is a lovely location in itself, and the perfect hotel base for exploring the gorgeous New Forest national park. 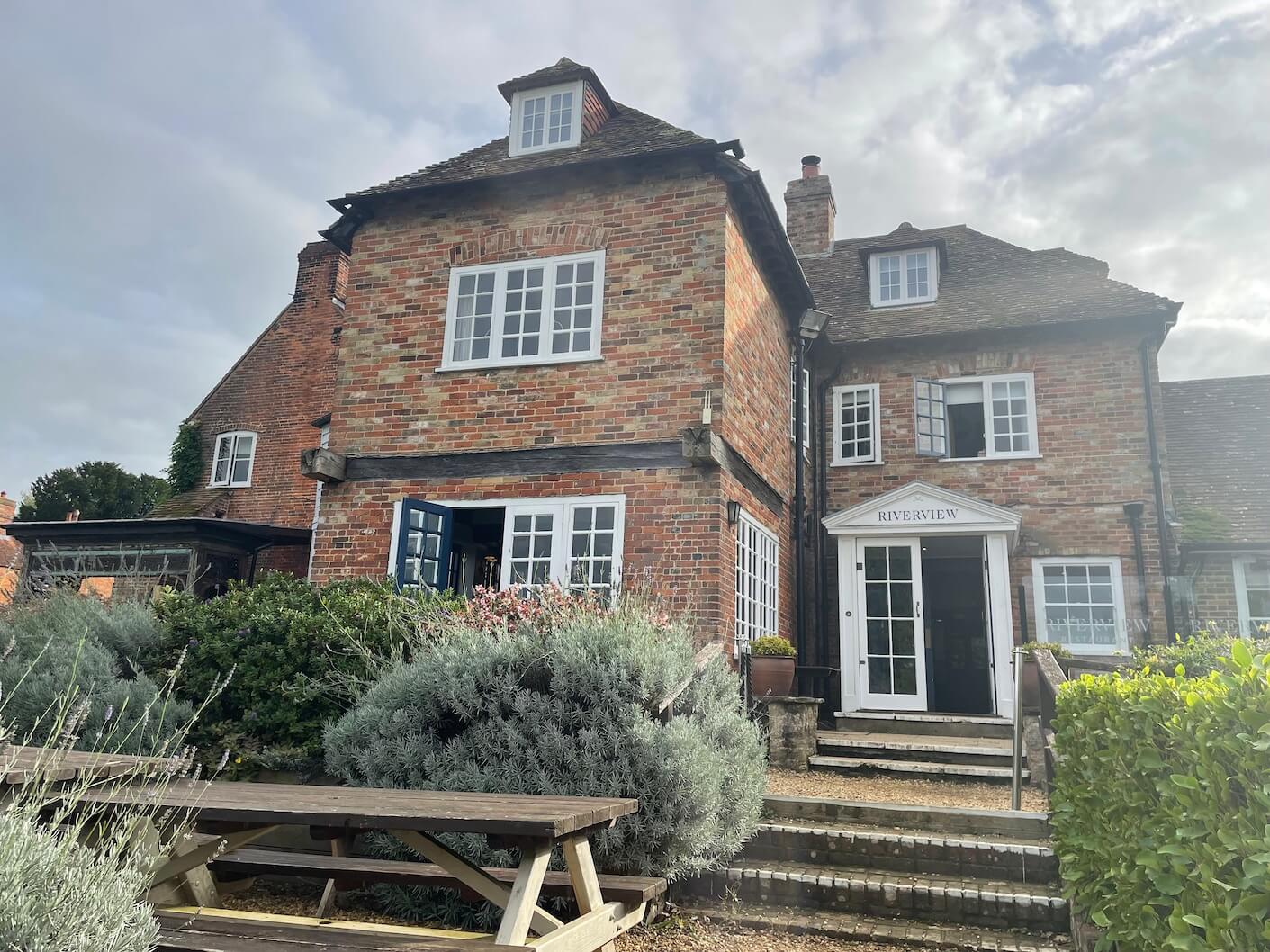 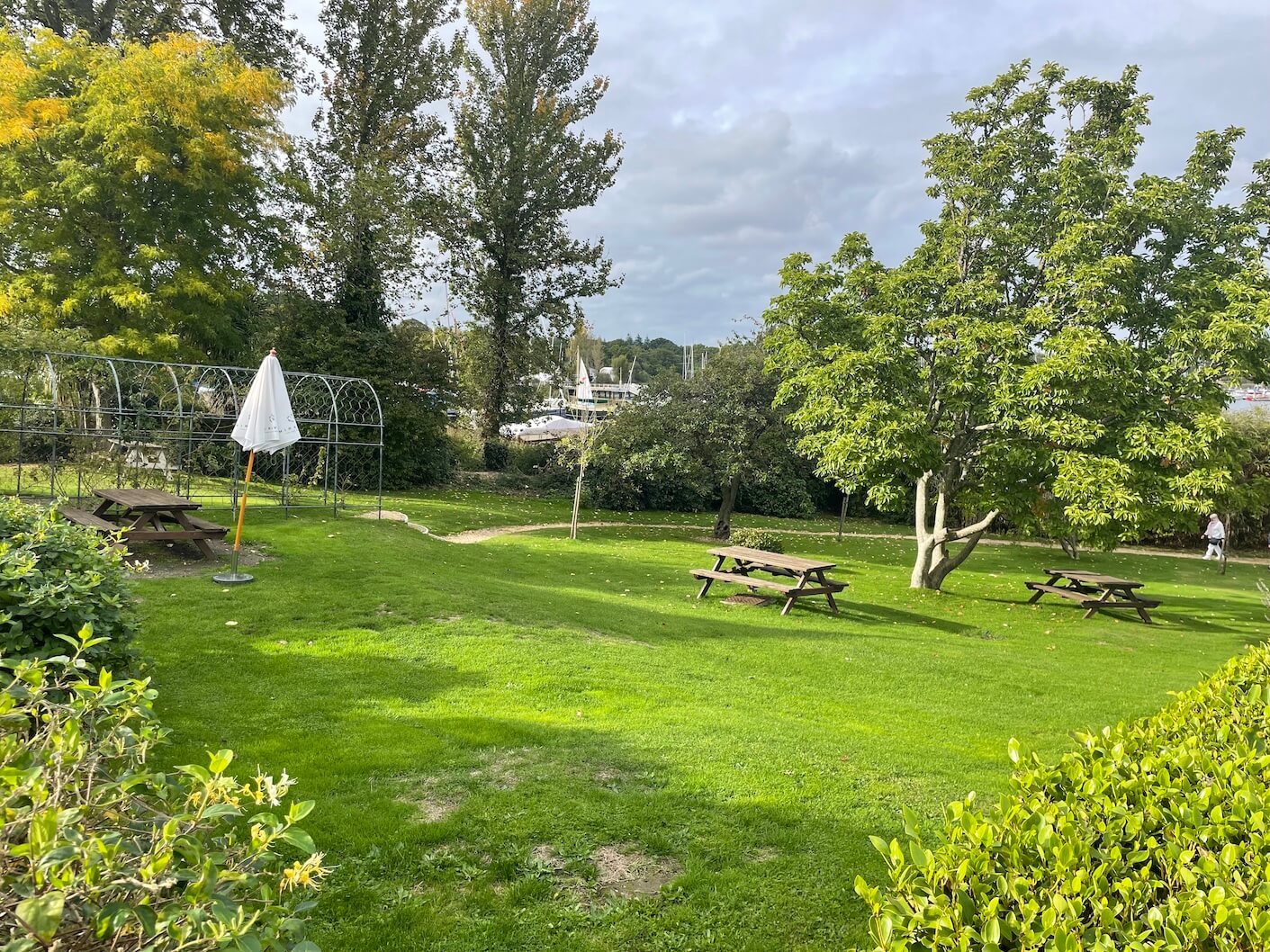 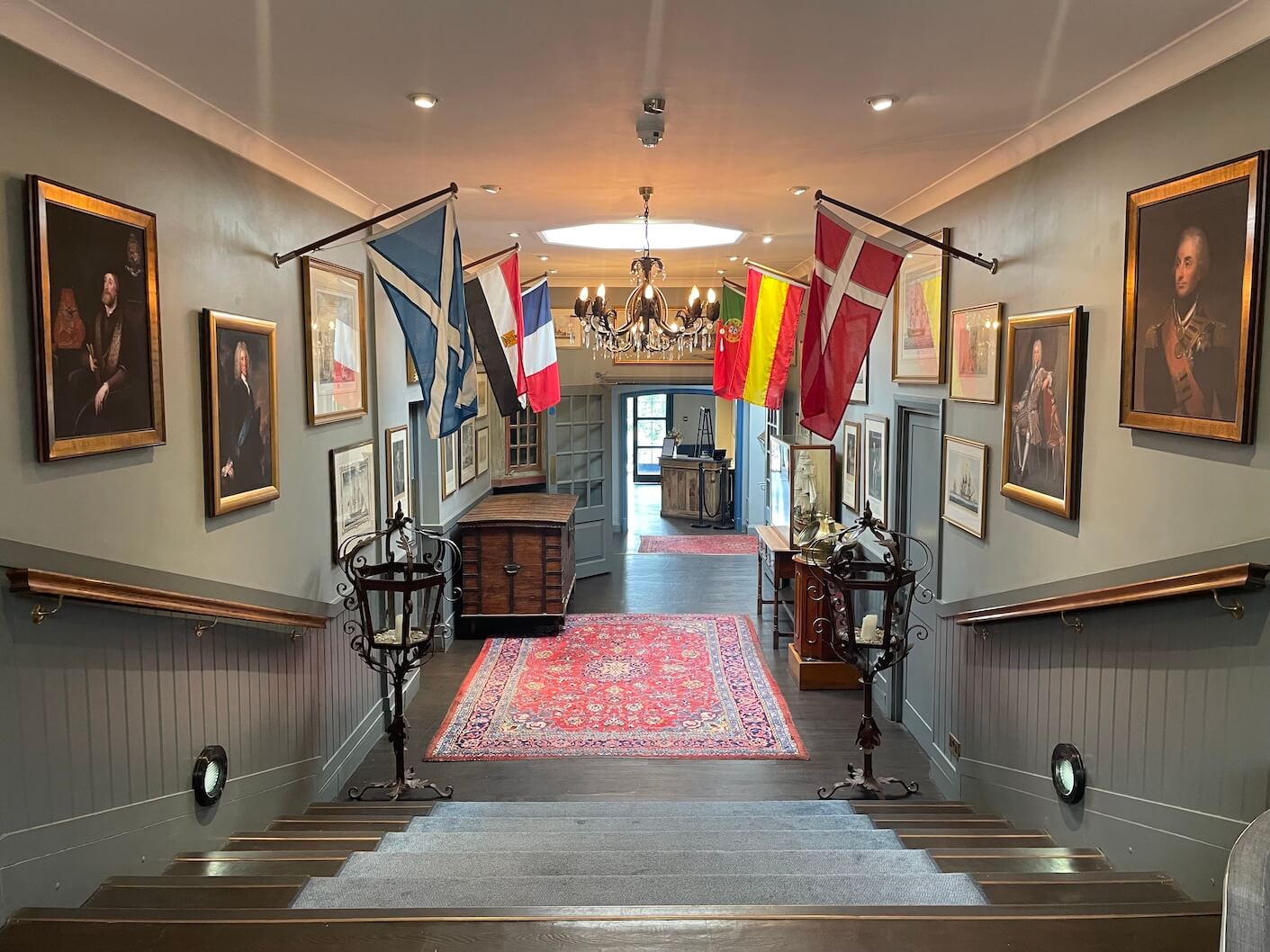 The hotel is located in the historic village of Buckler’s Hard, and naval history enthusiasts will be in their element here, with the nearby restored shipwrights workshop and Maritime Museum to explore, as well as the ships, pictures and flags adorning the interior of the hotel itself. 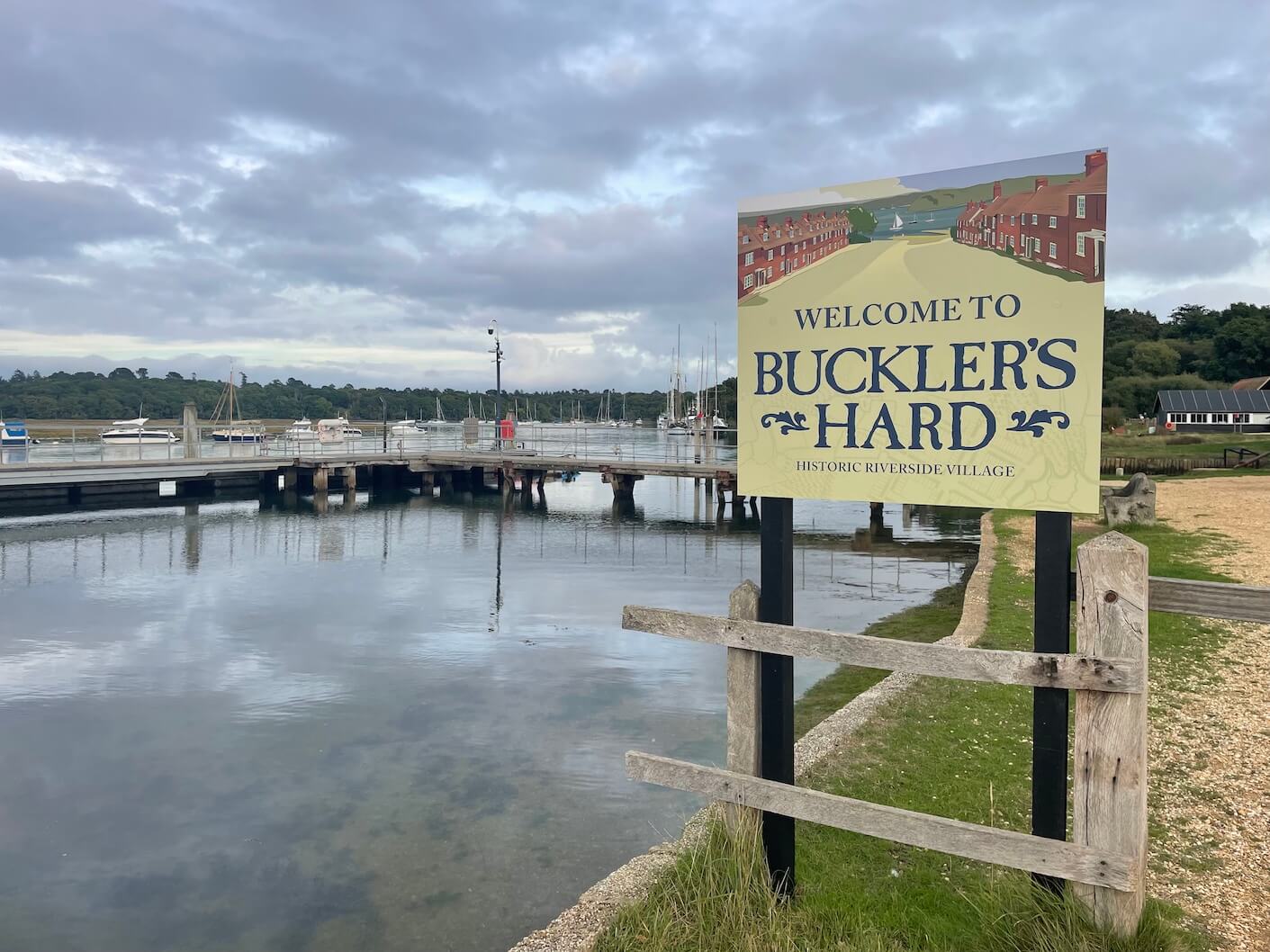 The Master Builders House hotel is located in the historic riverside village of Buckler’s Hard, which was perfect for shipbuilding in the 18th century 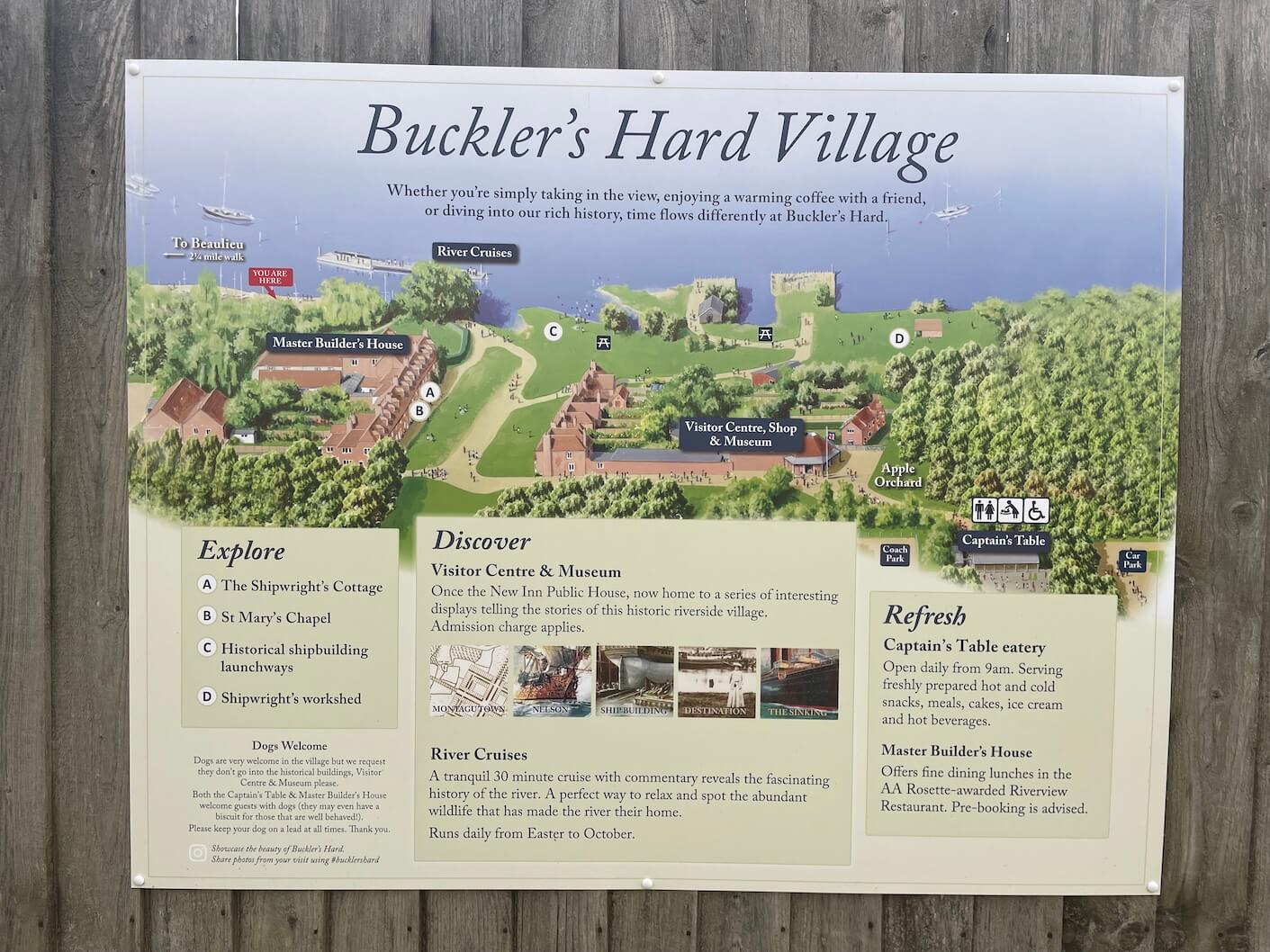 However you don’t have to be a history nut to enjoy exploring the river bank and rows of 18th century cottages next to the hotel on the former High Street (now an open green space) as well as the historic St Mary’s chapel which seats just 40 people. 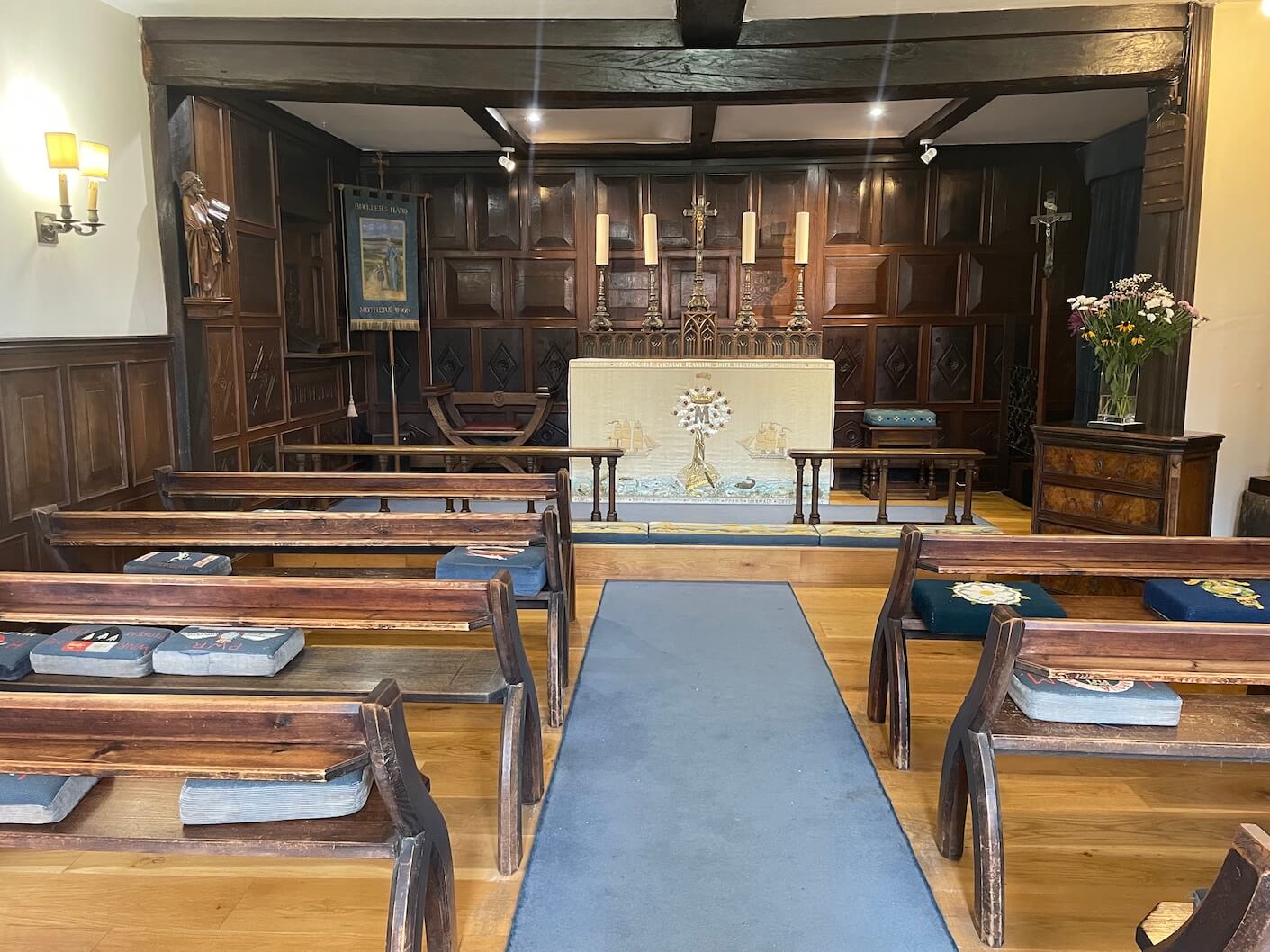 The interior of St Mary’s chapel next to the hotel

Buckler’s Hard itself was named after a local family with the addition of hard – local dialect for firm landing place, perfect for a shipbuilding yard. Outside the hotel runs a footpath along the riverbank all the way to the pretty New Forest village of Beaulieu, home to the famous motor museum, and a private shipyard still operates here. 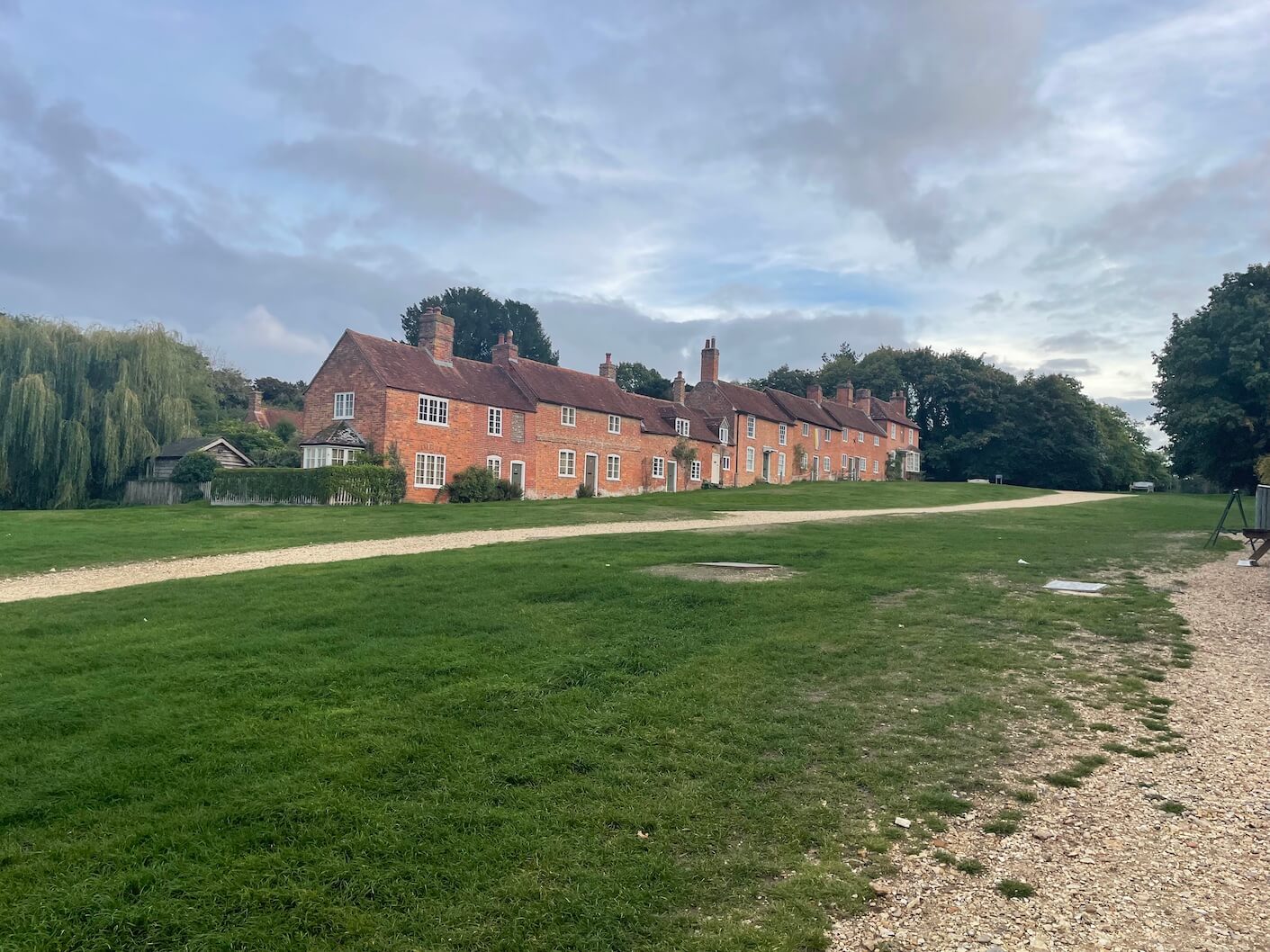 The former High Street of Buckler’s Hard still contains the original 18th century cottages, two of which are owned by the Master Builders House hotel and are available for self-catering hire 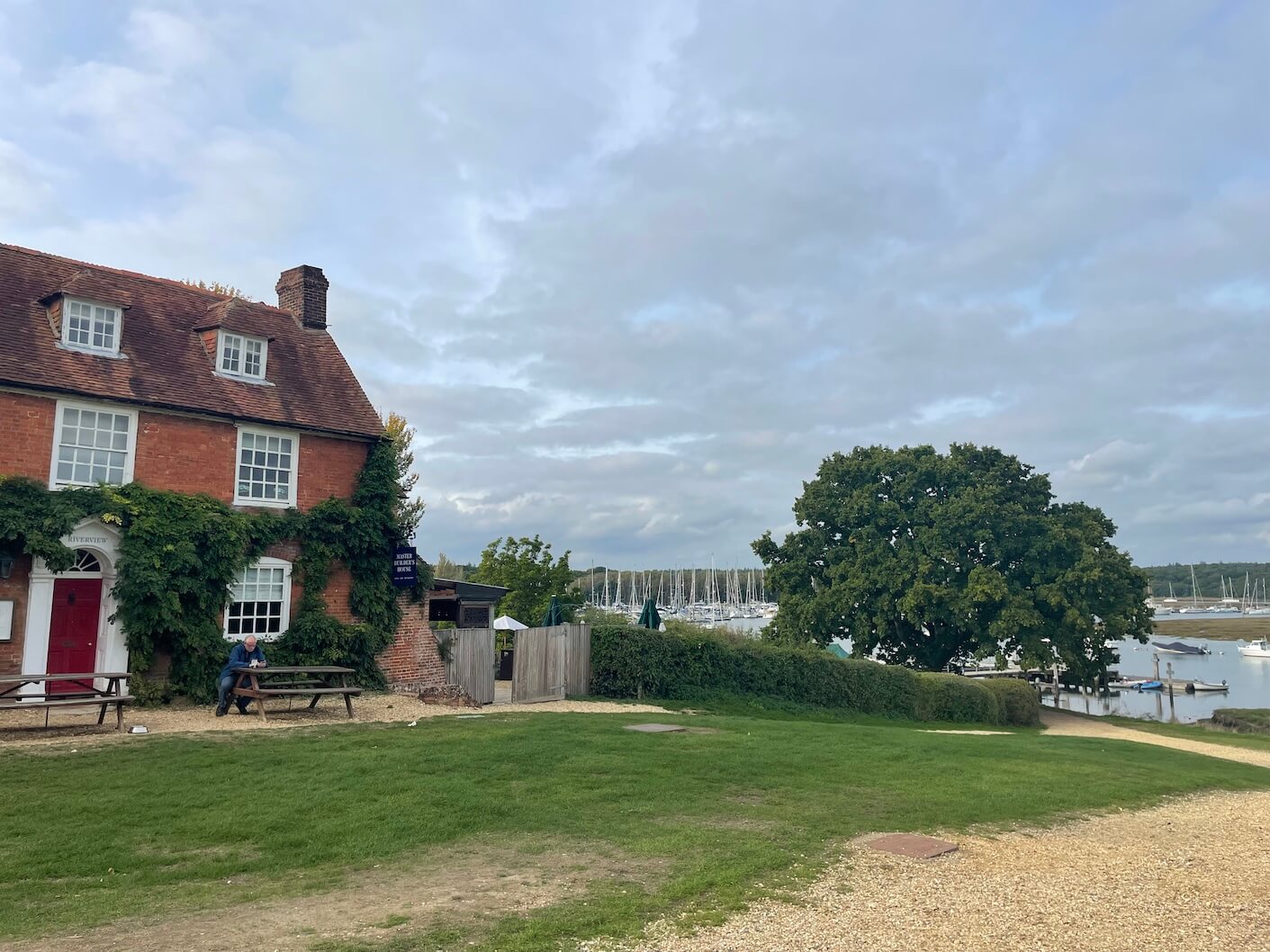 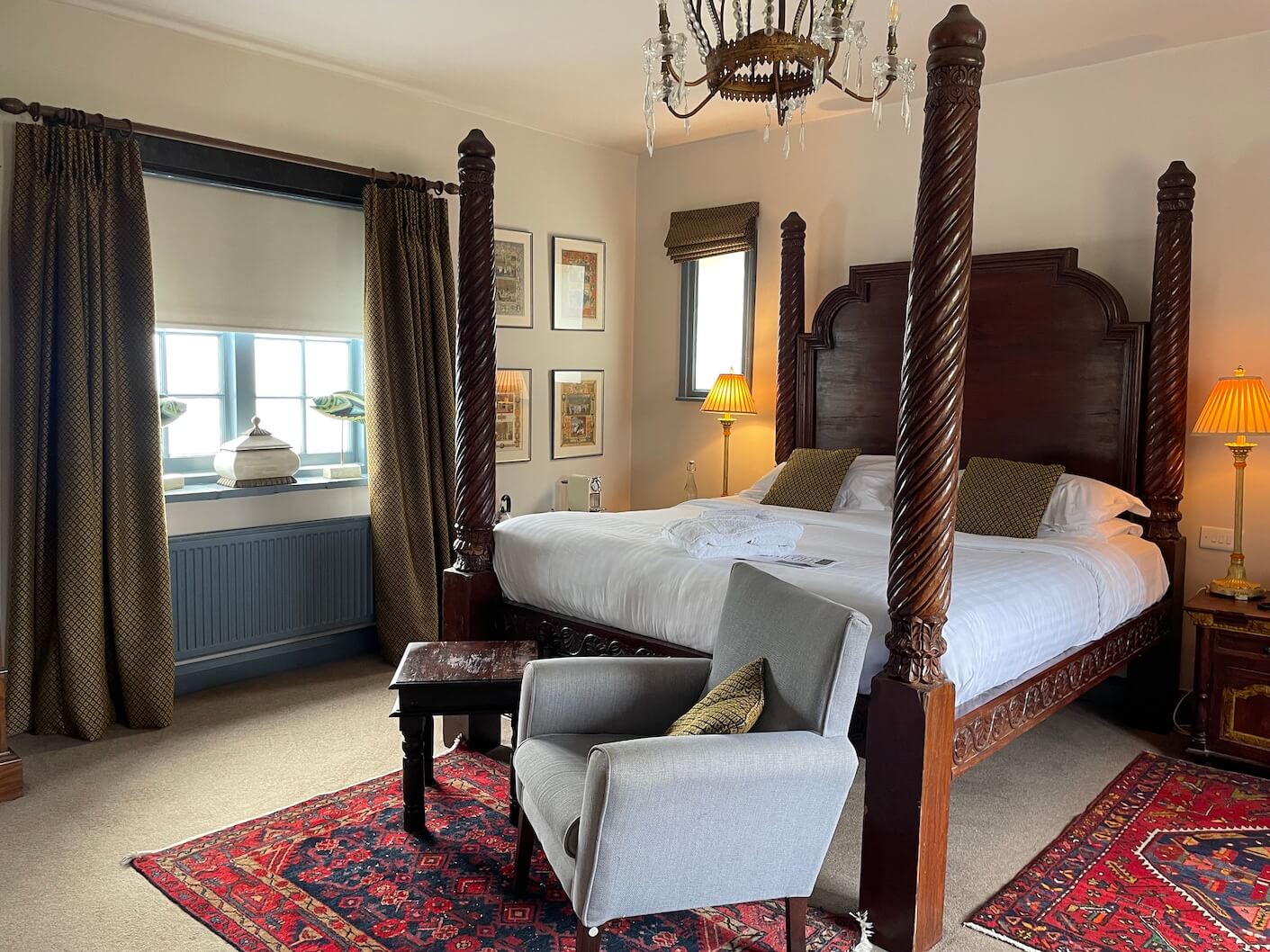 My bedroom, the Victorious, is one of the luxury rooms at Master Builders House hotel and had a four-poster bed, large bathroom, writing desk and great views over the river

I stayed in bedroom 19, aka Victorious, one of the hotel’s top tier luxury rooms, which had a four-poster bed, chaise-longue, writing desk, armchair, large ensuite bathroom (with a great range of full-size toiletries) and vast bath. 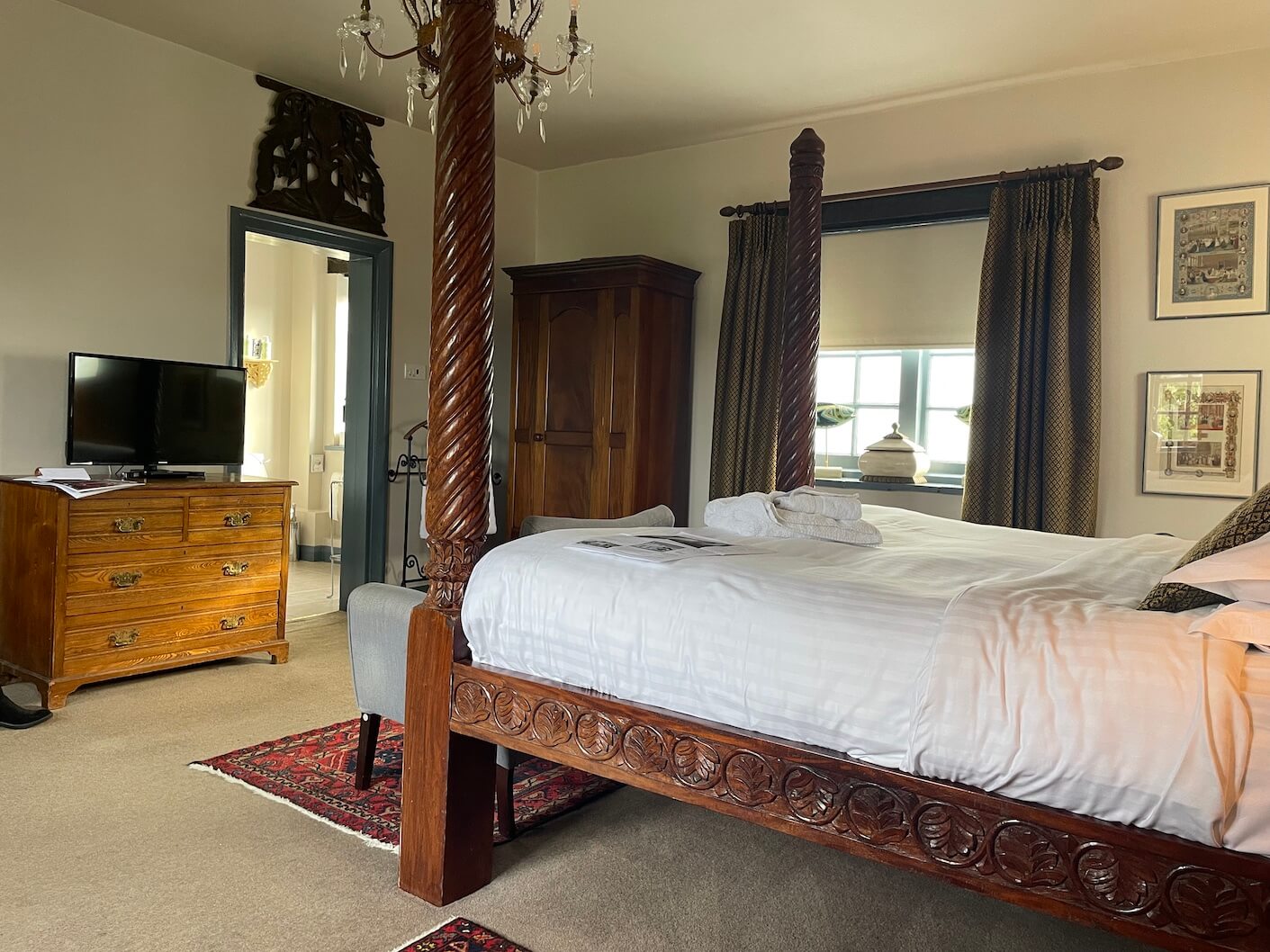 My room has traditional furniture, a large ensuite bathroom and everything you need such as free wi-fi, smart TV, hairdryer and coffee machine

There is free wi-fi throughout the hotel and my room also had a fridge stocked with fresh milk and tonic water, a miniature of complimentary gin, kettle, Nespresso machine, Roberts digital radio, Smart TV and lots of wonderfully fluffy towels and robes, along with an ironing board and iron, hairdryer and slippers. There was ample space and best of all, the room has great views over the nearby Beaulieu river. 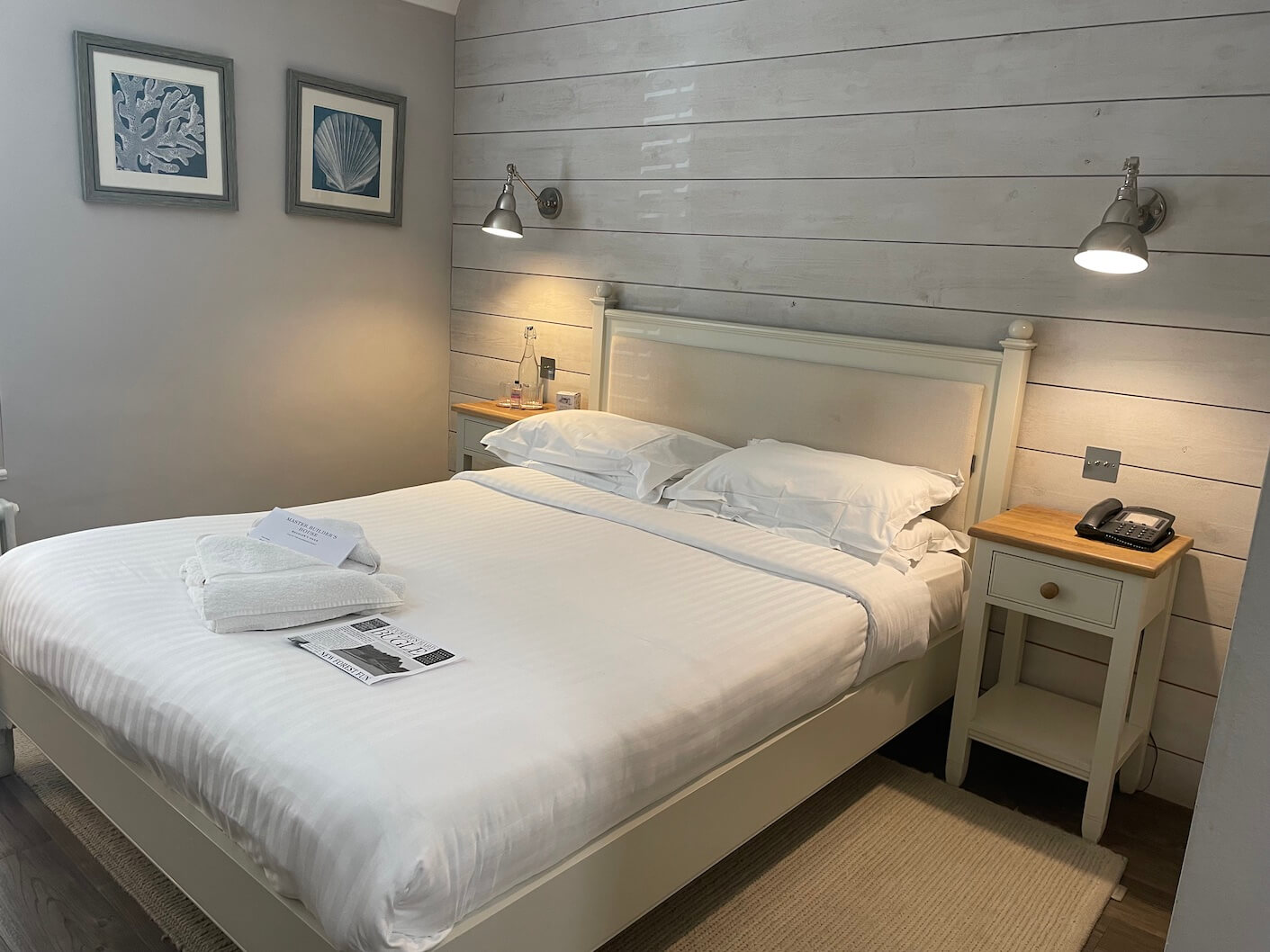 It’s incredibly peaceful exploring the area immediately around Master Builders House. The front of Master Builders House hotel faces the wide expanse of the River Beaulieu, while there are fields to one side and a large open green with a row of 18th century cottages leading down to the riverbank. Staying here immediately feels as if you’re in a different world and it’s hard not to feel relaxed while ambling around Buckler’s Hard.

The footpath toward Beaulieu contains little diversions off the path to nature reserves and a bird-watching hide, and the shipwright’s workshop has a fascinating video about the history of the Agamemnon. If that all sounds like too much effort, then a drink inside or outside the pub at Master Builders itself is the ideal way to relax.

Dinner at the Master Builders House

There are two dining rooms to choose from at the Master Builders House’s Riverside restaurant, so I chose the one which has the large window overlooking the large beer garden and, beyond it, the river. 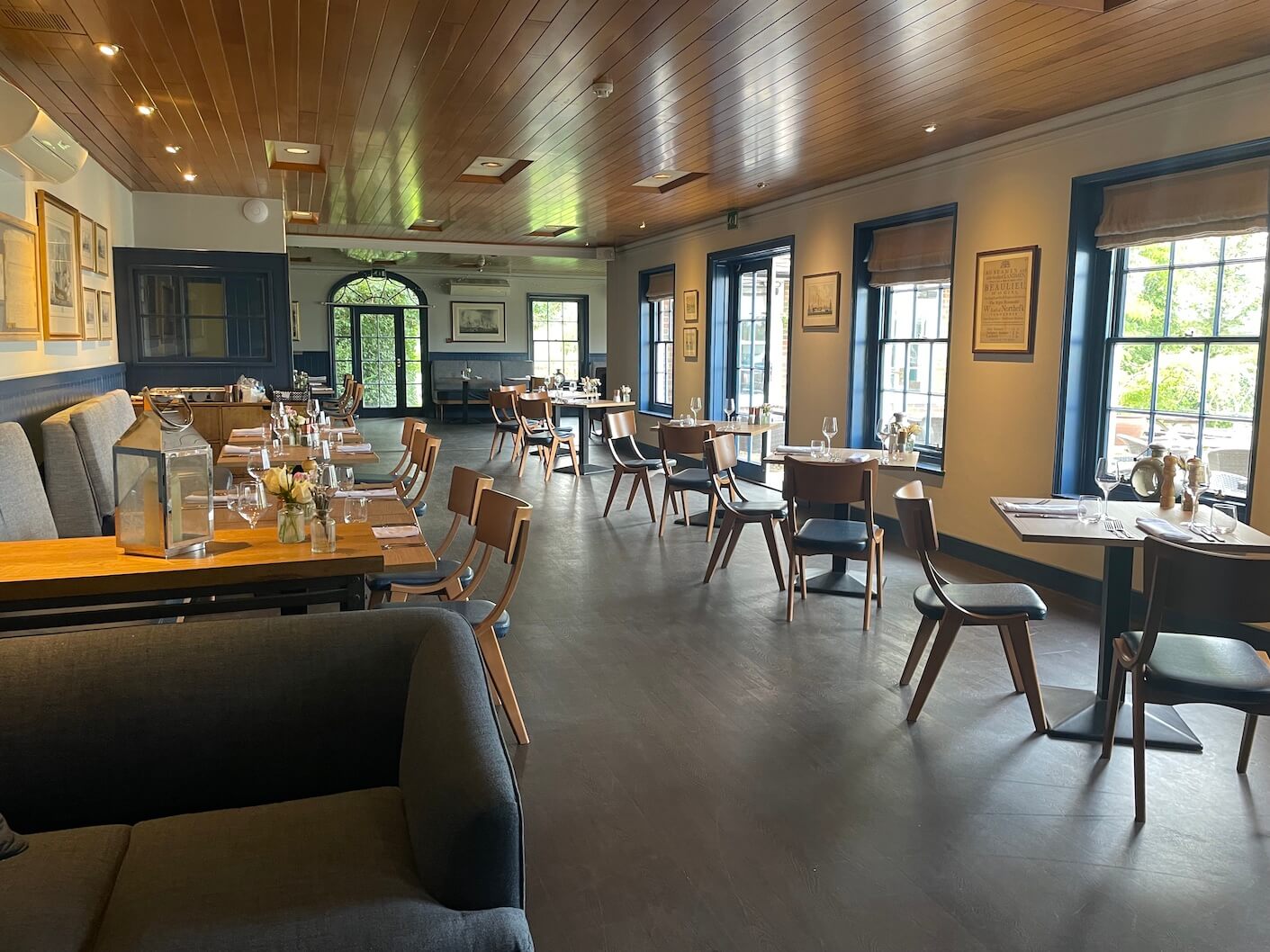 The food was excellent here as was the friendly and efficient service. I couldn’t decide between the whitebait or the tiger prawns pil pil to start with, so, being extremely hungry (or greedy) I had both, while still having ample room for the perfectly cooked lamb which was the daily ‘Butcher’s Board.’ 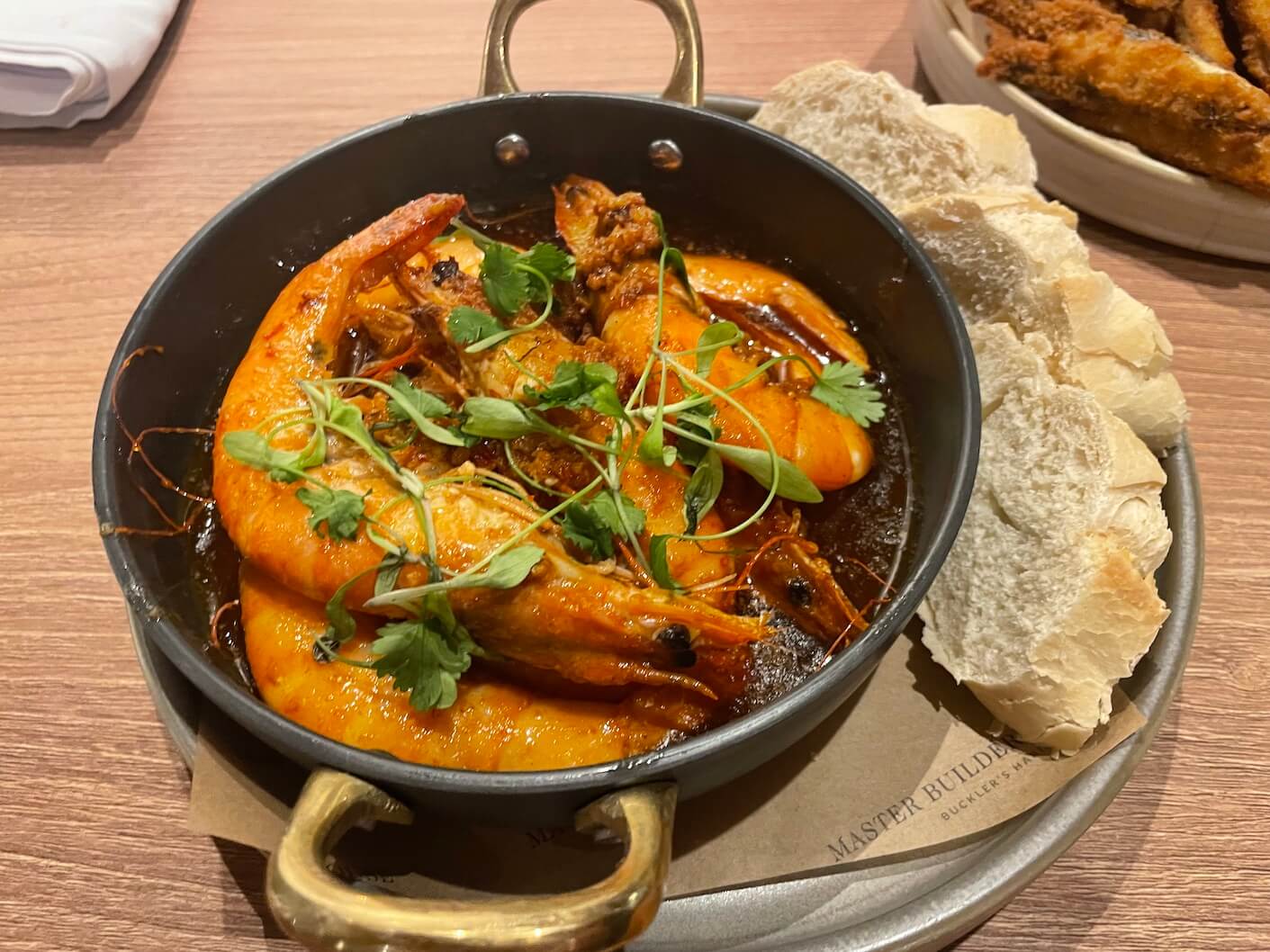 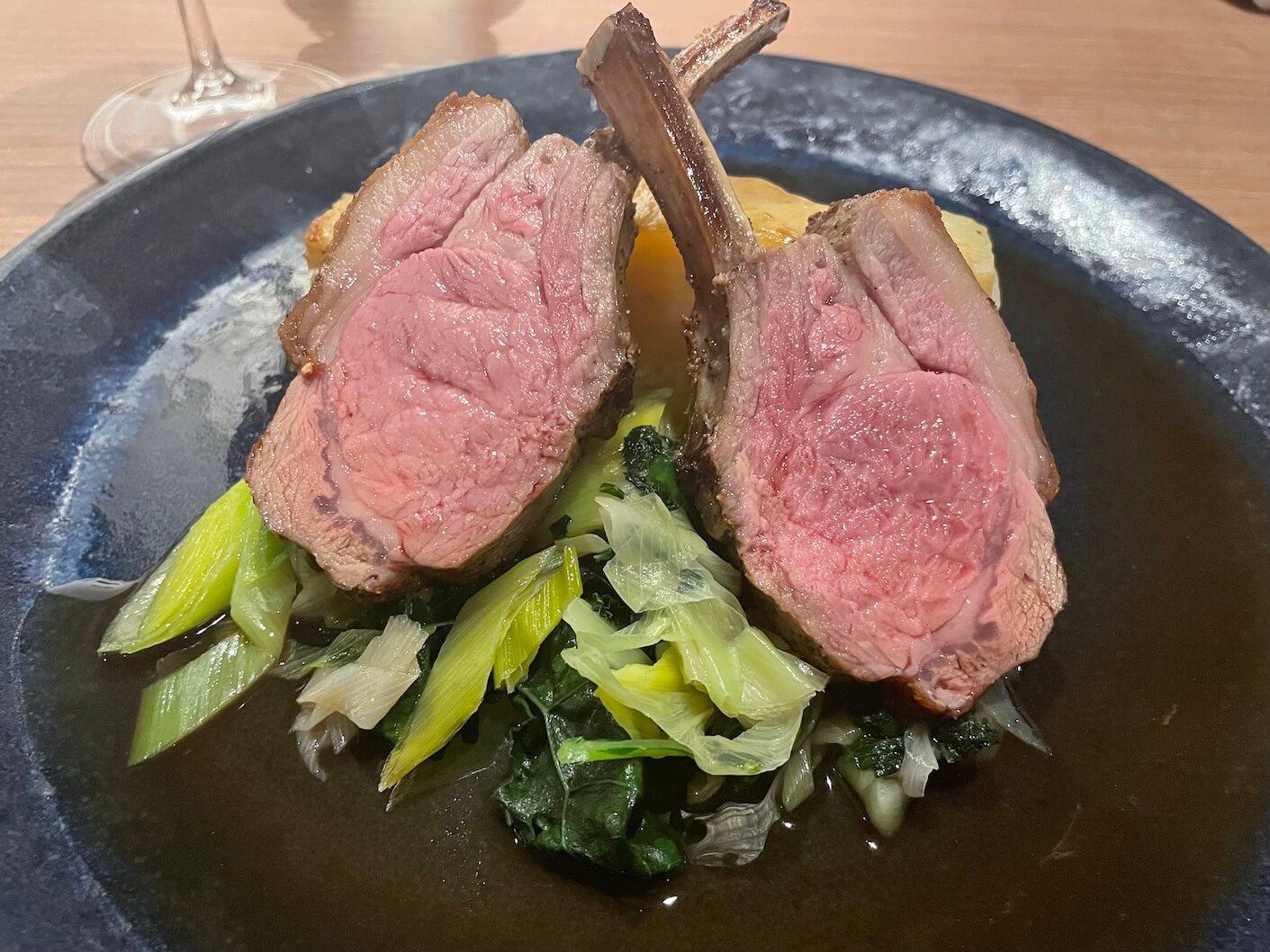 With just enough room for a sorbet afterwards I had a post-prandial walk around outside in the pitch darkness – you really do feel miles away from anywhere here – and climbed into my vast four-poster bed for eight hours of dreamless sleep.

Breakfast at the Master Builders House 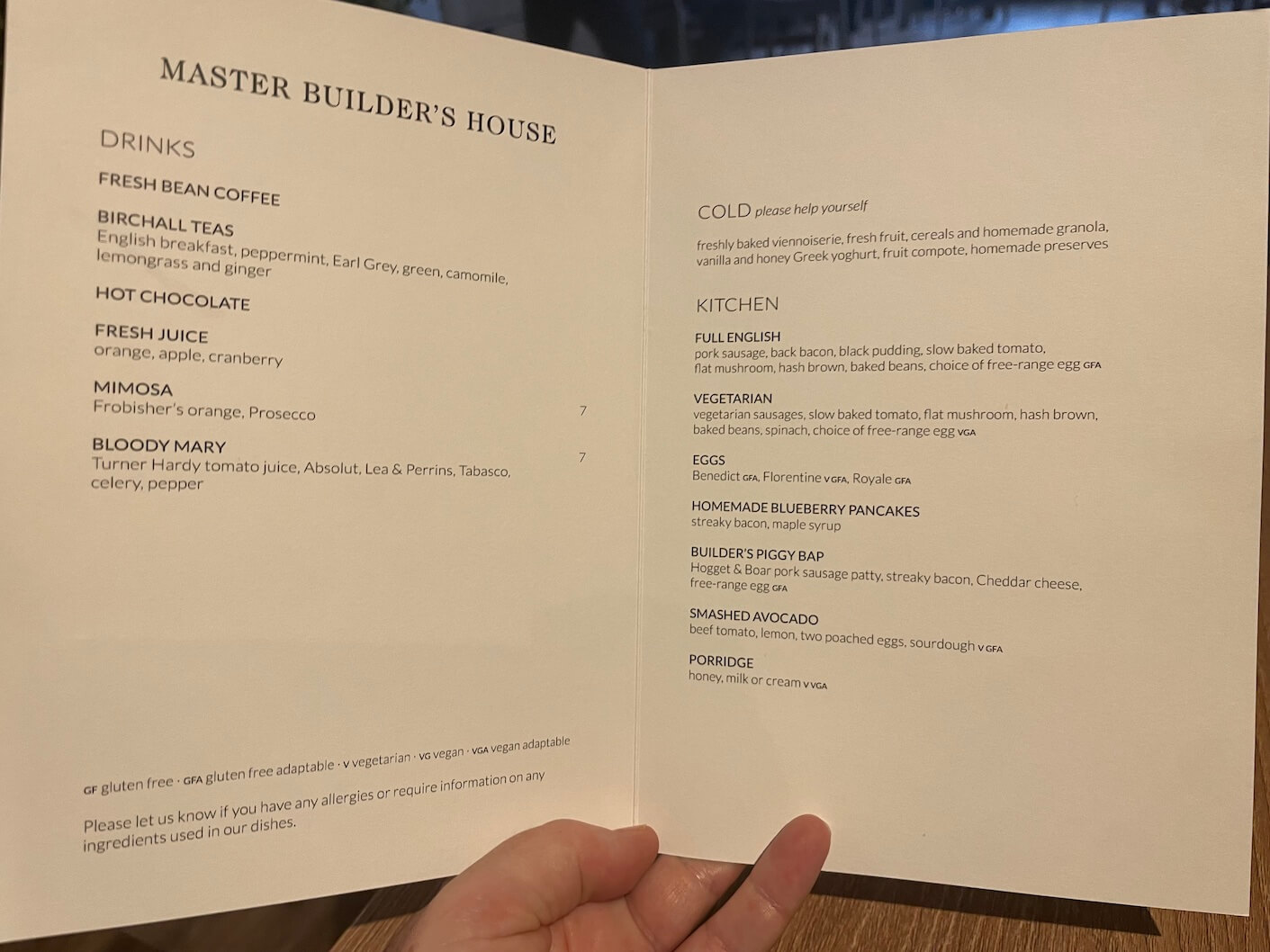 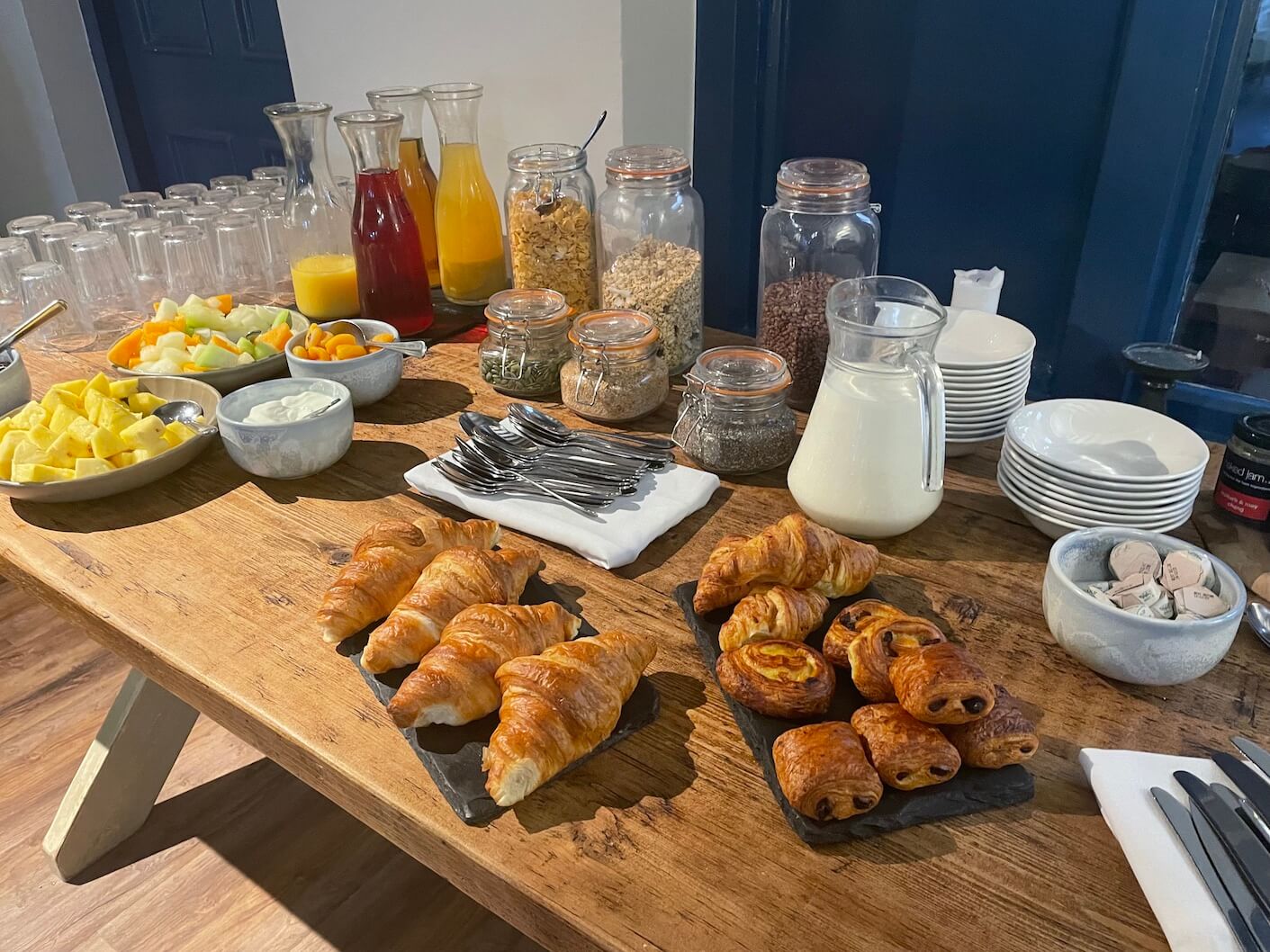 Breakfast was as prompt and efficient as dinner the previous evening had been, so while my cooked breakfast was being prepared I could tuck into the selection of cereals, pastries, fruit, juice and yoghurt. 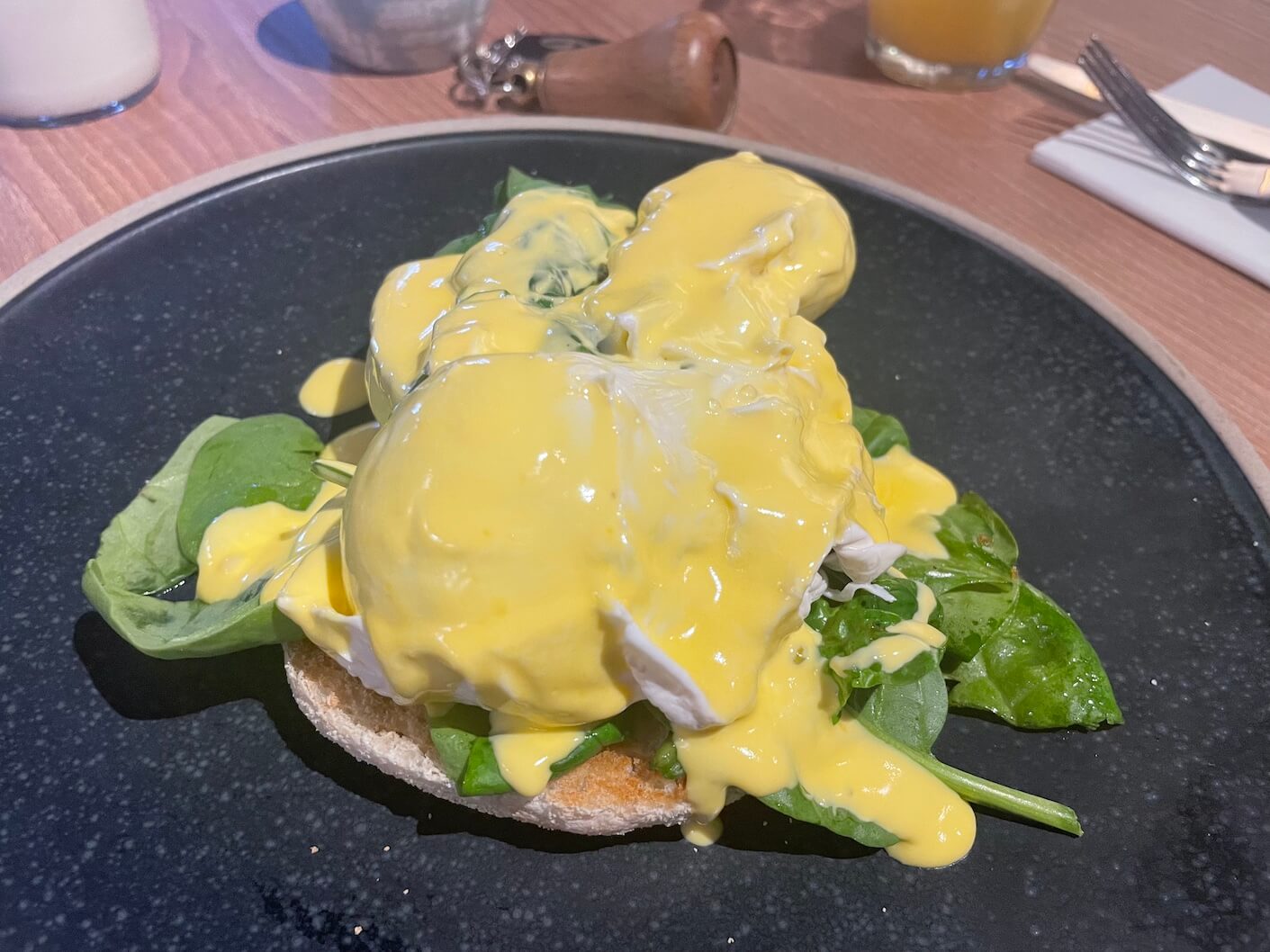 My Eggs Florentine was very indulgent indeed, being drenched in Hollandaise, and having requested a late check-out I had the morning free to work at my desk overlooking the boats bobbing around on the river. If you want to see the river from closer up, there are half-hour river cruises which run from just outside the hotel while just a short drive away is the famous National Motor Museum at Beaulieu.

After just a night at the Master Builders House hotel I felt incredibly relaxed and well-looked after by the friendly and informative staff, and little touches like the morning Bugle served to make this a memorable place to stay. 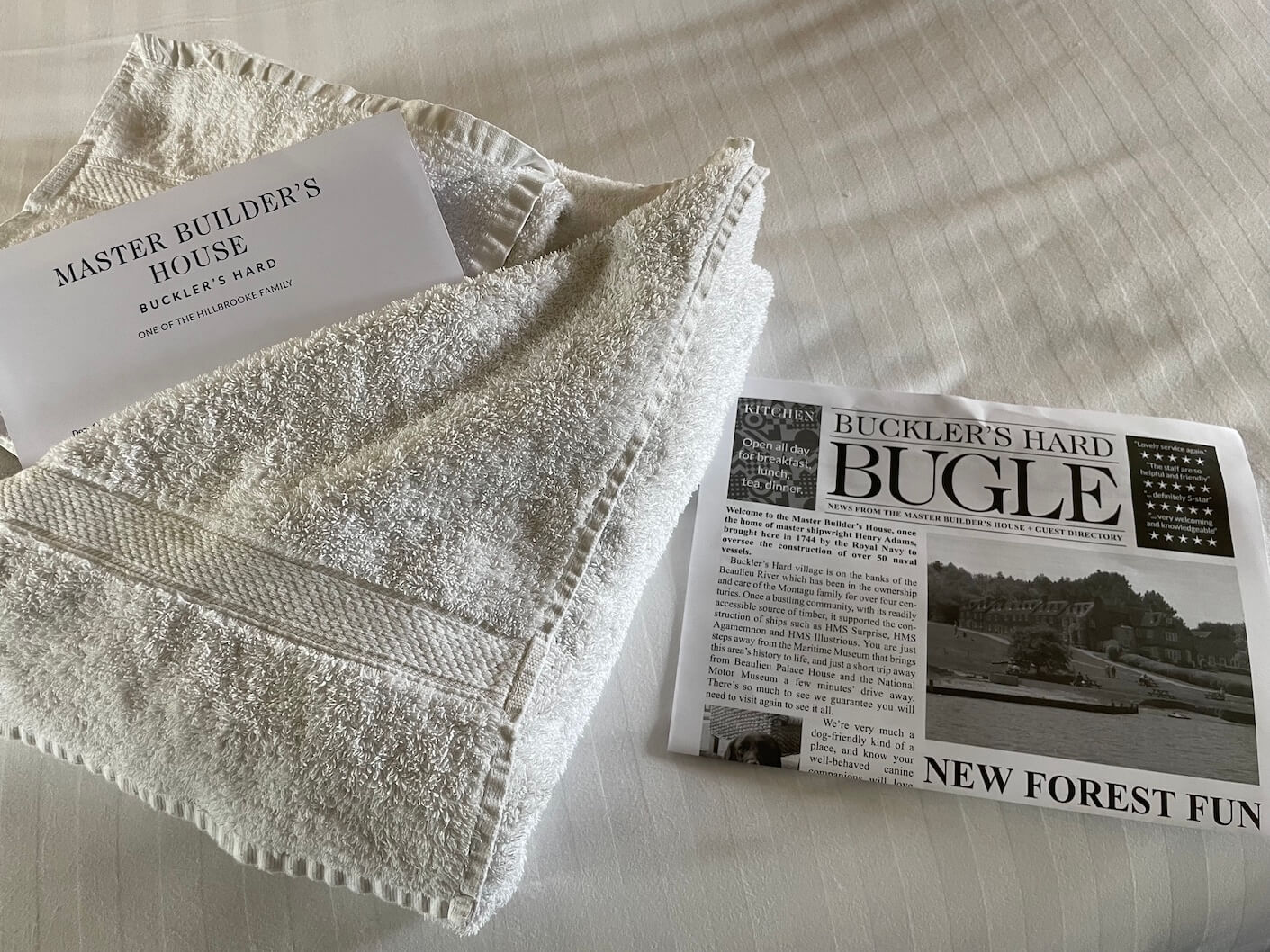 The Master Builders House even has its very own ‘newspaper’

Hotel information and how to book the Master Builders House hotel

ALadyofLeisure.com is delighted to have been named one of the 20 Best Hotel Reviews Blogs and Websites by Feedspot 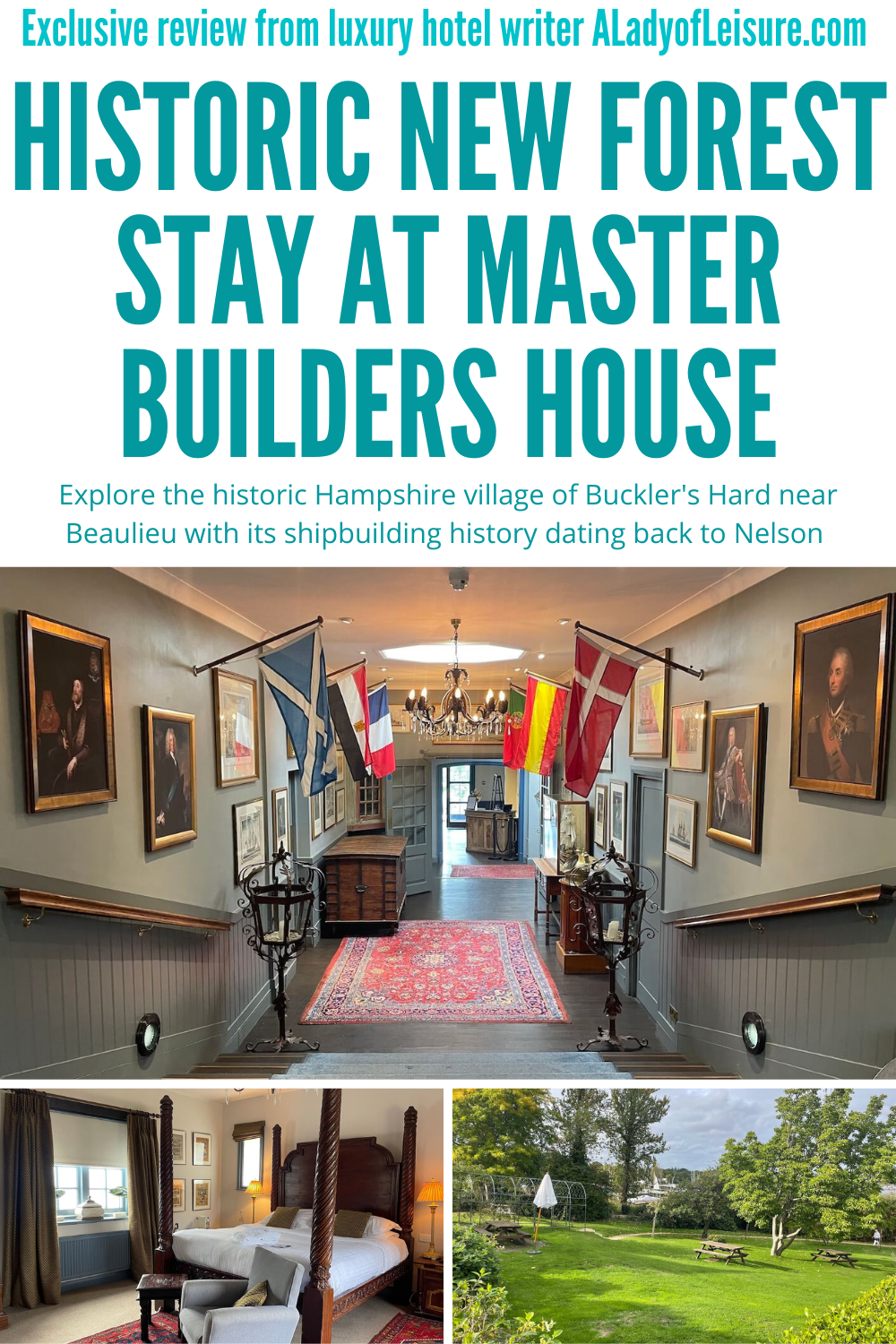