Home / UK / What to do in Derry in Northern Ireland, including a spooky Derry Halloween

If it’s ghouls, ghosts and goblins you’re after, then you have to spend Halloween in Derry Northern Ireland and experience its epic Halloween festival for yourself. Derry was voted ‘Best Halloween destination in the world’ by American newspaper USA Today and the entire town goes Halloween-crazy for an entire week leading up to the big day itself.

Contents hide
1 What to do in Derry in Northern Ireland
2 History of Derry
3 What to call Derry?
4 What to do in Derry
5 Enjoy an epic Halloween celebration
6 Go on a walking tour of Derry
7 Walk across the Peace Bridge
8 Visit Bogside and the Museum of Free Derry
9 Visit Seamus Heaney Homeplace in the village of Bellagy
10 Cut your very own Irish peat
11 Where to eat and drink in Derry

What to do in Derry in Northern Ireland

But there are plenty of great reasons to visit Derry anytime in the other 364 days of the year and you can fit a lot into just 48 hours in Derry: its beautiful location for one: perched on the banks of the River Foyle and just a stone’s throw from the Atlantic ocean and some stunning beaches. Derry is closer to Glasgow than Liverpool and visitors flying in from the British mainland will – weather permitting – get spectacular views of the Scottish coast including the Mull of Kintyre. 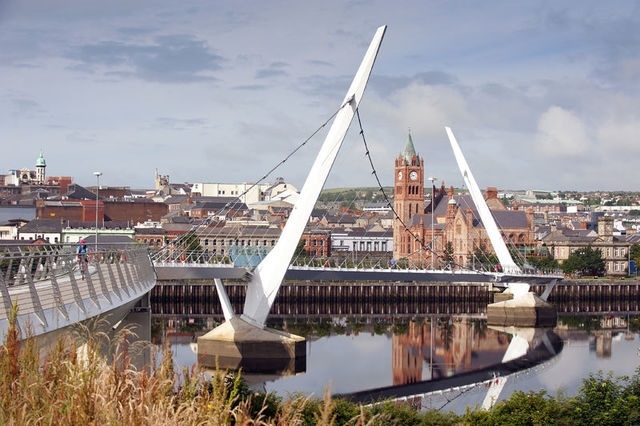 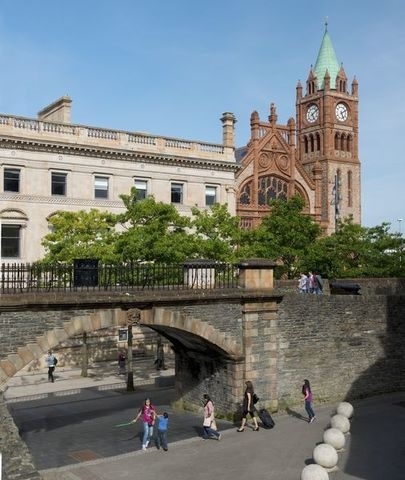 Then there is the sense of history, both ancient and more recent, which has shaped the character of the city. Derry is the only completely walled city in the island of Ireland and its 17th century walls – nine furlongs round, just over a mile – are a delight to walk, run or cycle around.

Its more recent and turbulent history as a city torn apart by sectarian violence in the long and costly war between unionists and loyalists now forms a part of Derry’s more moving sites: the curving Peace Bridge crossing the river and symbolising hope for a once divided city, and the murals painted on the walls of the terraced houses in  Bogside, just outside the city walls and the site of the Bloody Sunday massacre in 1972. 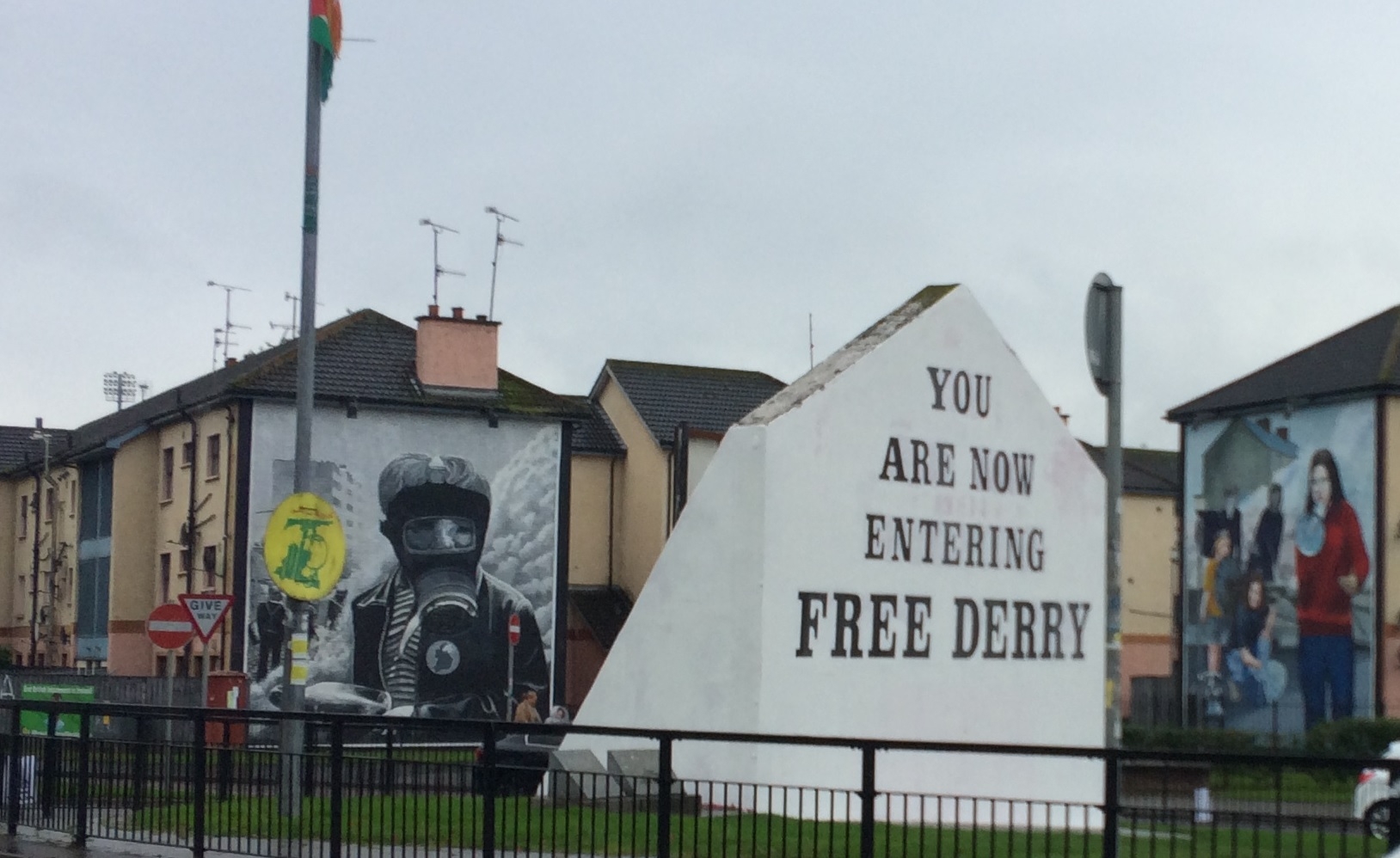 Murals on the side of houses in Derry’s Bogside, site of much conflict over the years but now a great symbol of the peace process

What to call Derry?

While the name Derry echoes down through history, the name itself is still a source of contention: is it Derry, Londonderry or its Celtic name of Doire? The choice of name is a political one, with Irish nationalists traditionally using Derry and unionists Londonderry, the name Derry was changed to in 1613 after investors from London financed the building of the walled city.

The options of Derry/Londonderry/Doire have led some to call it Stroke City and some – not all – signs to Londonderry have been graffitied over to leave just the last five letters. To add to the confusion, the airport is called City of Derry airport, the railway station is called Londonderry and the city is still officially called Londonderry while the city council is not. However as Councillor John Boyle, the current Mayor told me, ‘I don’t care what people call it, as long as they come and visit.’ 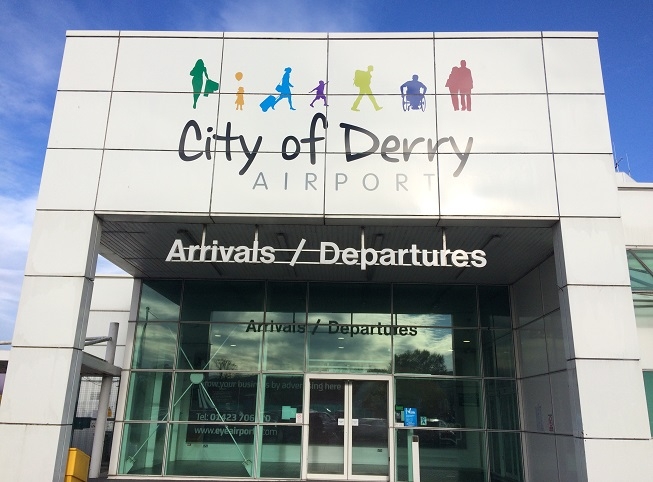 And come they do: Derry is one of Northern Ireland and the island of Ireland’s fastest growing tourism destinations. Regular flights from the UK by Ryanair, Flybe and TUI mean that Derry is the perfect destination for a long weekend and visitors are coming not just to discover Derry’s history but also its growing food, events and cultural scene. But there’s a lot to get through in just a few days…

What to do in Derry 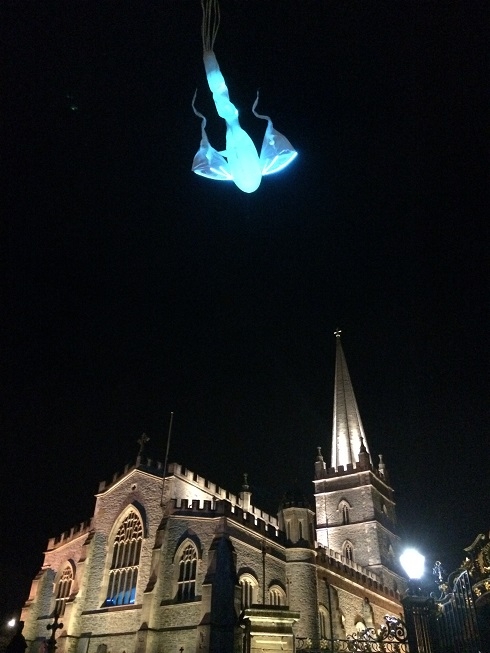 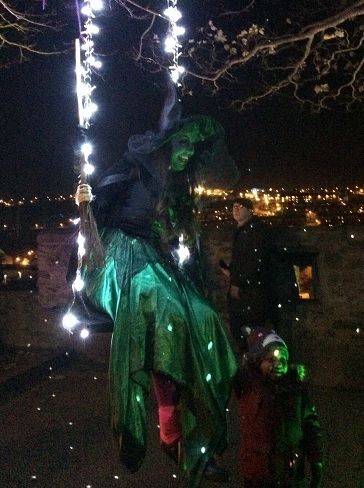 Halloween has its origins in pagan Ireland’s Samhain festival which marked the start of winter – and a mere 3,000 years later, Derry is bringing it right back home. What started as a small fancy dress party in a pub 30 years ago is now an epic week-long epic festival that brings tens of thousands of people into the city every year. 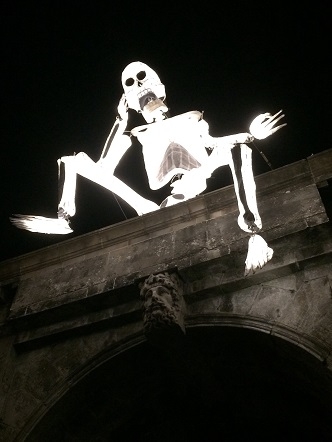 With more than 100 events in 40 venues across Derry, you’ll be spoiled for choice, with everything from a Zombie Apocalypse experience and a Zombie 5km run to haunted castles, fun fairs, cemetery tours, ghost bus rides and street theatre to entertain and terrify you. Not to be missed is the three-night long Awakening The Walls which is an astonishing collection of theatrical events, aerial displays and visual imagery.

Walking the full circuit of the walls is nothing like anything I’d experienced before: there were witches hidden in trees, fire-eaters, historic soldiers, haunted windows from which demonic nuns with red eyes could be seen, dancing skeletons and more, all to the delight of the hundreds of people doing the tour. Despite the crowds it all felt very friendly and calm, was well organised with a light touch and a truly memorable night. Halloween itself is a parade culminating in an impressive firework display and at least half the town will be in fancy dress. No excuses for not joining in!

Go on a walking tour of Derry

I’d say that a walking tour is essential: both to get your bearings in this compact city but also to hear Derry’s fascinating and terrible history from someone’s who’d lived through it. Garvin Kerr from the excellent Martin McCrossan walking tours – also known as City Tours – has lived and worked in Derry all his life and is everything you could want from a guide: entertaining, informative and very moving, particularly when we stood on Derry’s 400 year-old walls looking over to the Bogside district, scene of such bloodshed only a few years ago and now sparkling in the sunshine and looking like the most peaceful place you could imagine.

The walls themselves are listed as one of the World’s 1001 Historic Sites to see before you die by Unesco and take centre stage in Derry’s epic Halloween celebrations. 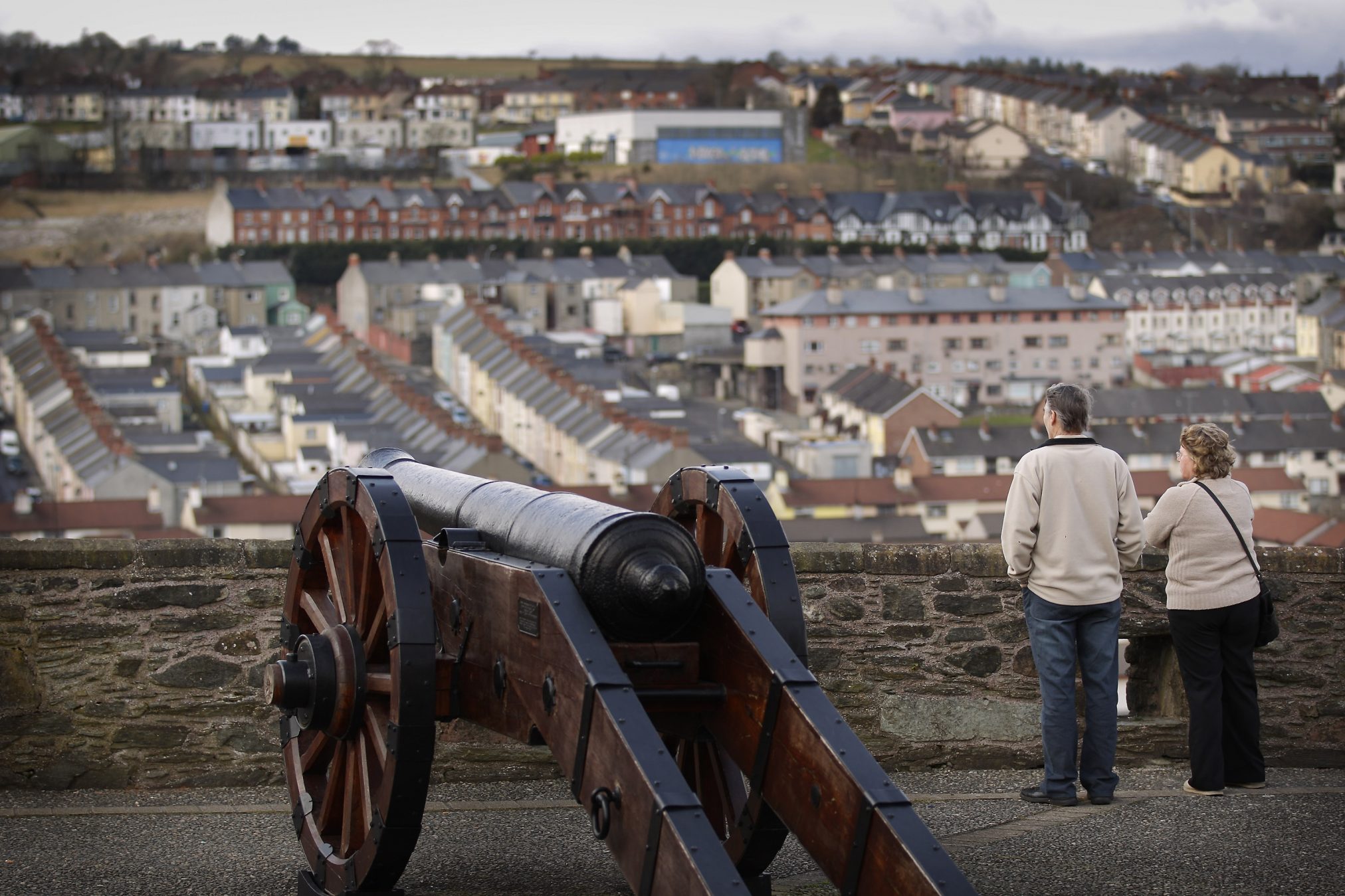 Different eras in Derry’s history: the cannons on top of the walls of Derry overlook the formerly troubled area of Bogside

Walk across the Peace Bridge 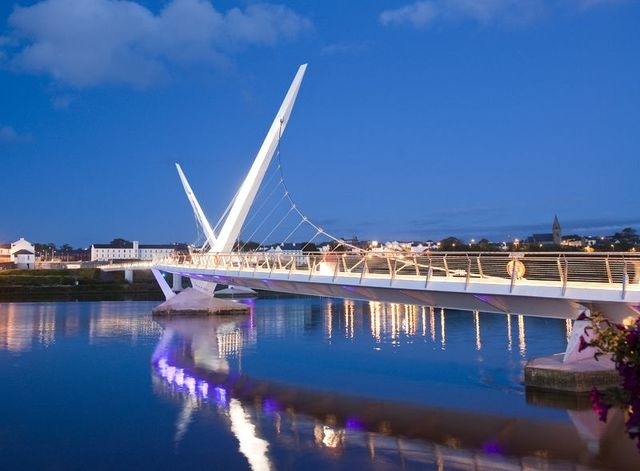 The curved crossing over the River Foyle – curved, because the path to peace is never straight – cost £14 million of EU money and is a ever-present reminder of how far the city has come. Walk across here to the newer part of the city which is undergoing regeneration, with open-air sculptures, a city brewery and a new hotel expected to open in 2019.

Visit Bogside and the Museum of Free Derry 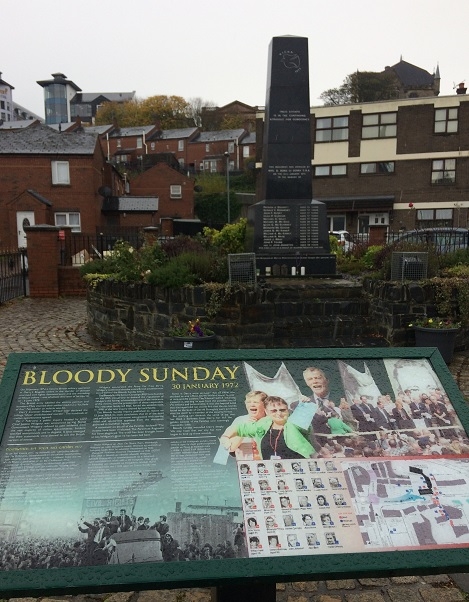 The Museum of Free Derry is a must-see for visitors to Derry and is a shocking and emotional introduction to the events of Sunday 30th January 1972, the civil rights march which became known as Bloody Sunday. Museum founder and justice campaigner John Kelly, who was 23 when his 17-year old brother Michael was shot and killed that day, spent an hour with our group talking about the lead-up to the march, the march itself and the effect it had on his family. Growing up in the Troubles, he says, ‘was like a war zone – you went out to work in the morning and you didn’t know if you were coming back… death and bombs were a way of life.’ 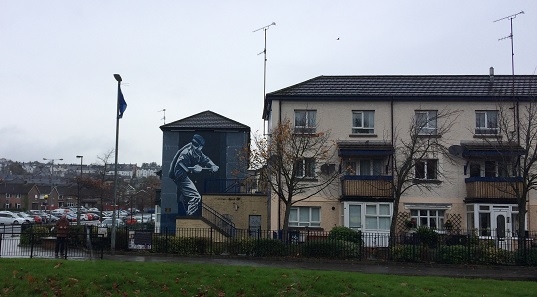 Kelly, who now has six sons and nine grandchildren, worked for decades to reopen the inquiry into Bloody Sunday and in 2010 was one of the first to read the verdict of the Bloody Sunday inquiry which concluded that the actions of the British Army that day were, according to David Cameron who apologised on behalf of the British Government, ‘unjustified and unjustifiable.’ Kelly is now fighting to have the individual soldiers prosecuted, such as Soldier F who shot and killed four people that day, including his brother. Whatever your views on the rights and wrongs committed by all sides, the museum is an essential part of understanding Derry’s history. Outside, the colourful Bogside murals have broken guns painted on them, to symbolise the city’s hope for peace.

Visit Seamus Heaney Homeplace in the village of Bellagy 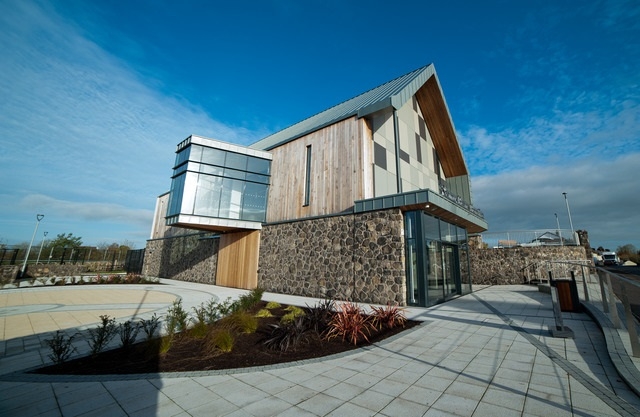 Less than an hour outside Derry is Seamus Heaney Homeplace which is well worth a visit even if you’re unfamiliar with his work (or had been put off at school). The museum is a fascinating celebration of the Nobel Prize-winning poet’s life and has a treasure trove of anecdotes and memories about his life, his family, his inspirations and of course, his poetry. 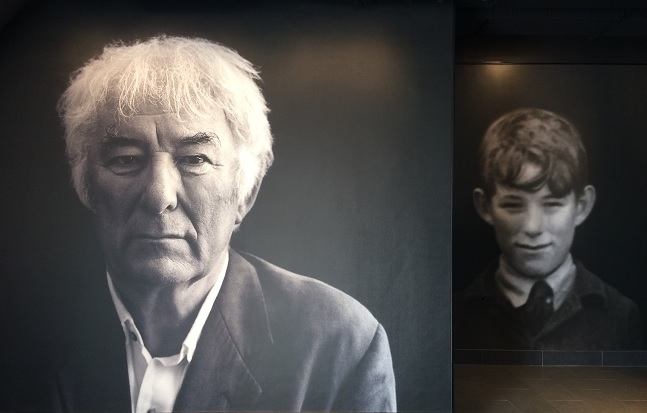 Spot the connection: Seamus Heaney as man and boy

I was surprised by how many poems I was familiar with (I must have paid some attention in English lessons) and loved discovering new ones, with the help of videos and audio from his friends and family. 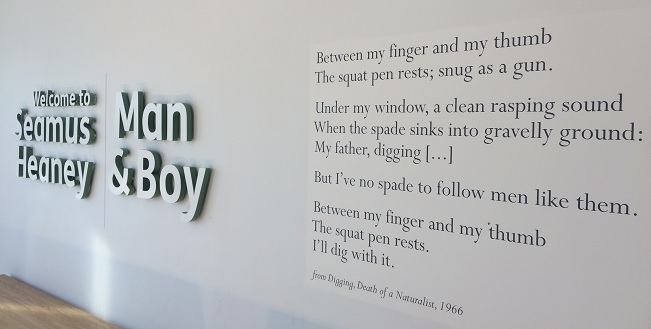 Cut your very own Irish peat 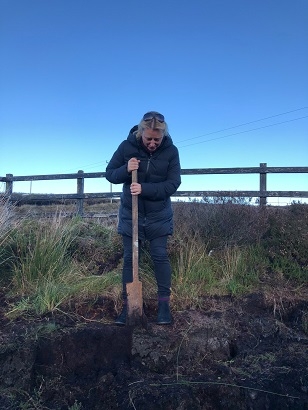 Cutting a slice of peat requires a great deal of concentration it seems!

Ireland is famous for its peat bogs which cover a sixth of the island and which used to be a staple source of fuel. Now cutting peat is pretty much something for tourists to do, and so here’s a picture of me doing just that, outside the highest pub in Northern Ireland, the Ponderosa. If you’re lucky, you’ll even get a piece to take home with you.

Where to eat and drink in Derry

Across the Peace Bridge, the Walled City Brewery was opened in 2015 and was the first craft brewery in the city centre for 100 years. Founded by James Huey and his wife Louise, the brewery restaurant is a beer-lover’s treat, with an array of ales with names such as Boom DPA – Derry Pale Ale – to Stitch, Kicks and Beerexit (particularly poignant as the border to Ireland is just a few miles away and many people cross it seamlessly every day to travel to and from work). 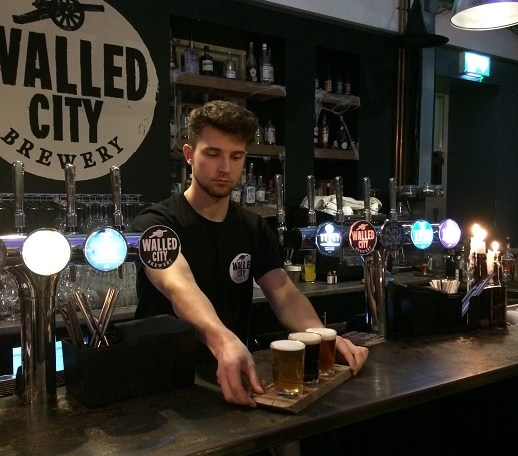 The food matches the quality of the beer, with locally-sourced produce making everything from tapas-style pintxos bites, to ‘fillers’ – main courses which include 12ox ribeye steak, BBQ pulled pork, roast chicken laksa and finishing off with a deconstructed cheesecake. 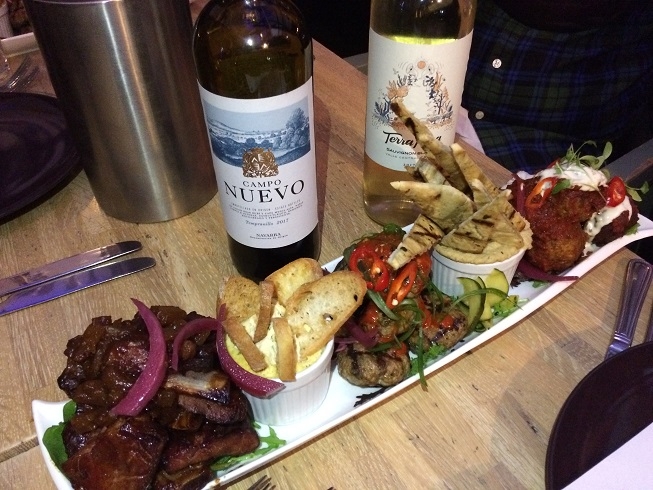 Tapas (and wine) to start off the meal. (I stuck with beer though) 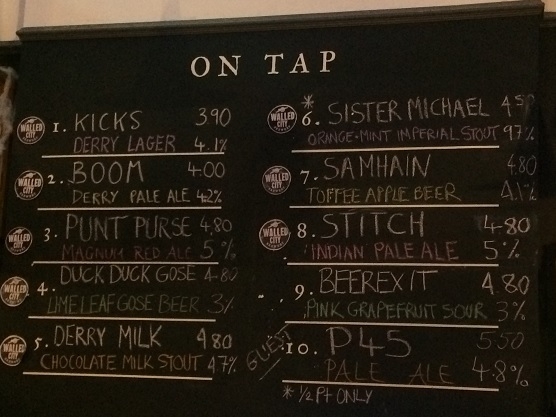 Back in the city centre, there’s a great choice of innovative and traditional restaurants such as Soda & Starch which prides itself on its ‘homely, rustic and comforting food’ and where I felt fully at home with a glass of Guinness and some hearty Irish stew. 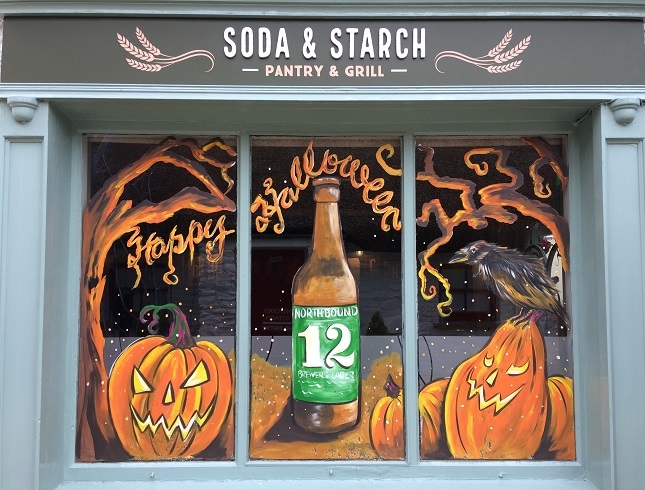 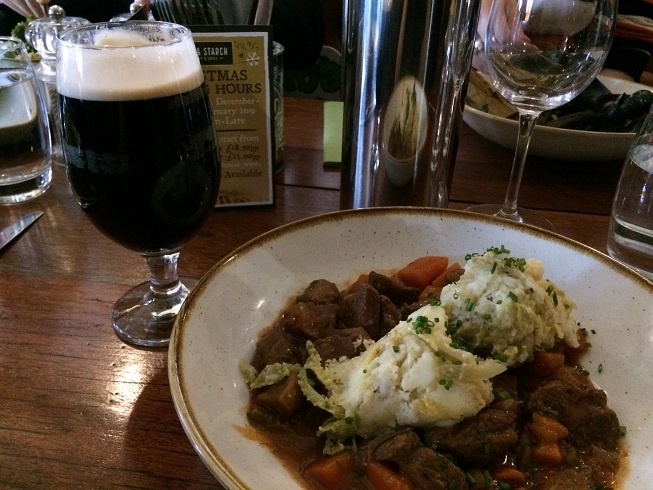 Guinness and Irish stew – a great way to start the visit

I also enjoyed Brickwork, just inside the city walls which not only did a great steak but also offers local ale from the Northbound Brewery. 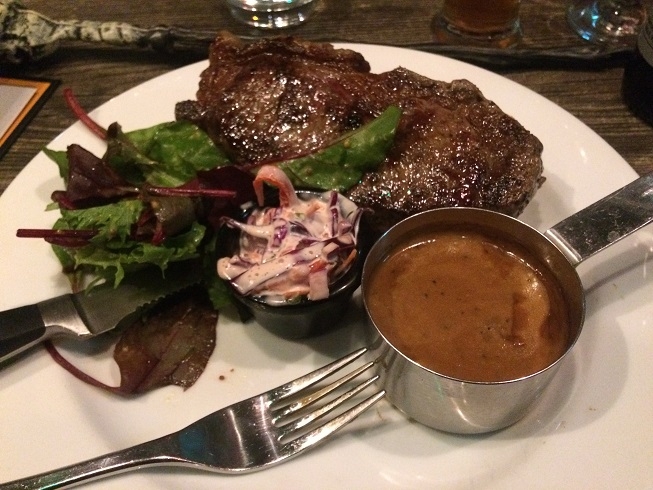 And of course, there’s always time for a drink in a traditional Irish pub…