Center Parcs is practically immune from criticism. With occupancy (in normal times) running at a staggering 97.1 per cent all year round, the private-equity owned leisure company is the envy of its peers.

In spite of the complaints about high prices during school holidays, there is clearly no shortage of customers willing to fork out for the Center Parcs experience when just four nights in a three-bedroom lodge can cost more than £1,500 in August, even before food, drink and any of the extra activities are taken into account. 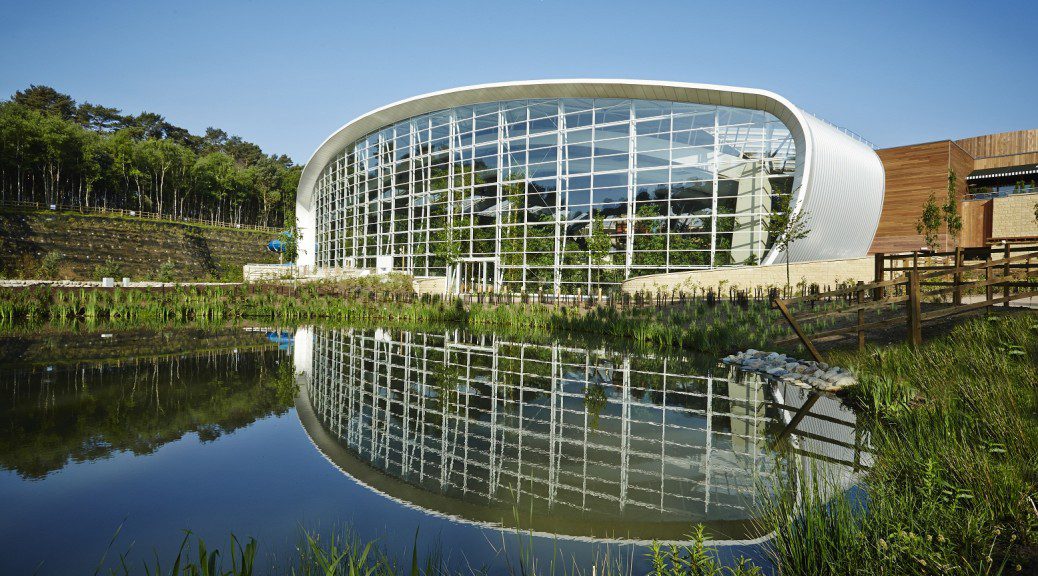 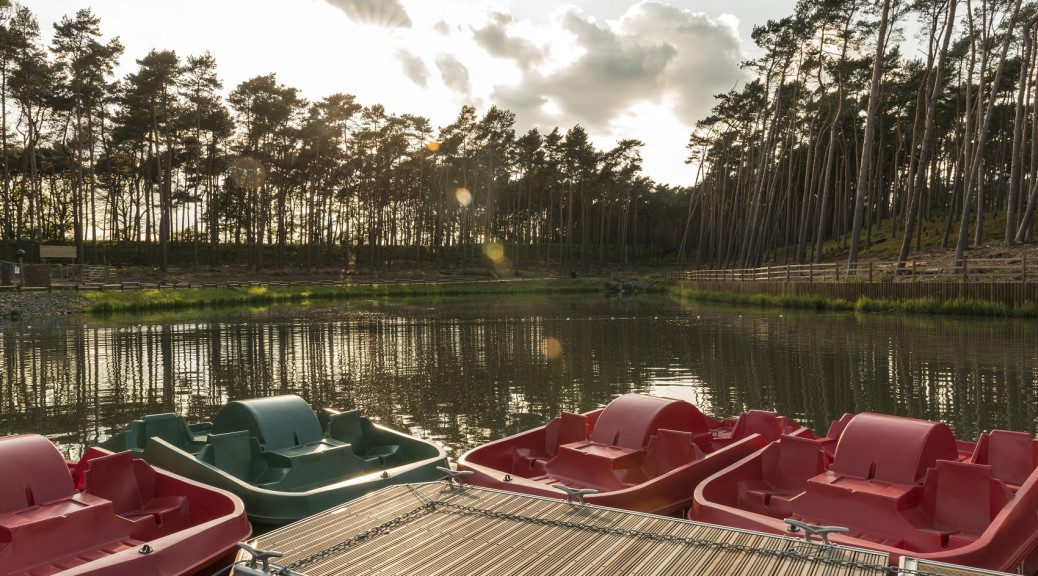 For those like me, who have never been to a Center Parcs before, the set-up is slightly surreal. For example, beyond a small, ordinary road junction four miles off junction 13 of the M1 is an entirely self-contained universe, a little bubble of unreality – aka Center Parcs Woburn Forest – completely disconnected from the world outside.

As in all Center Parcs sites, you arrive on a Friday or a Monday, find your new home for the next three, four or seven nights, do not leave the site at all during stay, and then at the end of the trip you find your car and drive back to the M1 and reality.

While the Woburn Forest parc is based in the Bedfordshire countryside, you could actually be anywhere in the country: you go to Center Parcs not to discover somewhere new, but to spend concentrated, quality time with your family, doing as many activities as you feel like (or can afford), from swimming and cycling to zip-wires, kayaking, table-tennis and rock-climbing.

There are more than a hundred activities available in each parc, and organised families will have worked out a schedule well in advance so as to maximise the amount of things they can tick off before it’s time to go home again. 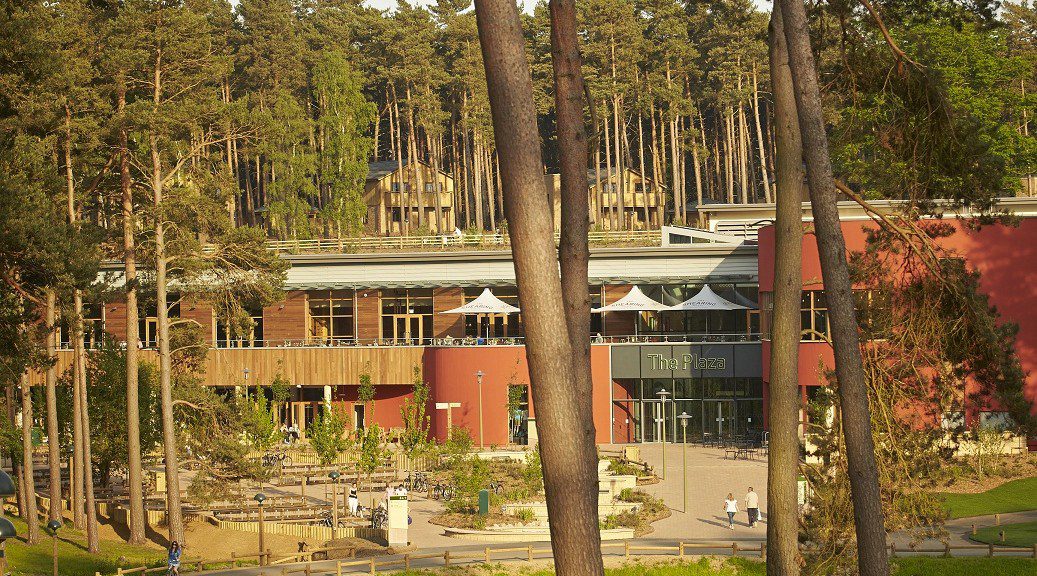 The Plaza building, which houses shops, cafes, the sports hall and a vast sports bar

Where to eat at Center Parcs

There are also lots of places to eat, from Strada and Cafe Rouge, Starbucks and in-house burger and pizza places as well as a supermarket so you can cook at home, and there is of course, the centerpiece of any Center Parcs site, the swimming pool, which in the case of Woburn Forest is called the ‘sub-tropical swimming paradise’ and cost £18 million.

I went with a friend and her two children, boys aged six and nine and I can say straightaway that they absolutely loved it. They loved the lodge, they loved the cycling, they loved the activities and they super-loved the sub-tropical swimming paradise. There is a certain glow which comes when you watch a small child so over-excited and beside himself with happiness that he is literally skipping and laughing with glee and when that moment happens (such as at the top of the ‘Typhoon’ water slide) then you wish for nothing more than for him to be this happy always. 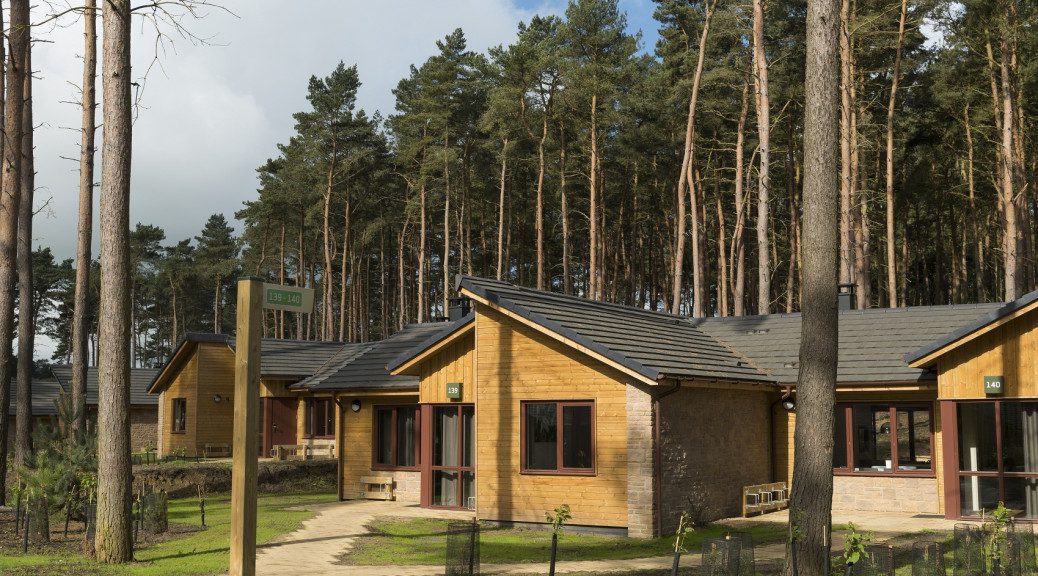 A woodland lodge – a cut above staying under canvas

Our main gripe though was Center Parcs’ car policy which means when you arrive, you first drive to your lodge, unload your stuff, drive back to the entrance, park your car in a massive car park, and then trek or cycle back with your family to your lodge. It is a faff at the best of times, and if you are a single parent, have spent five hours driving in Bank Holiday traffic with two small children, the last thing you want to do at 8pm on a cold Friday evening is to unload the car, get two tired children back in the car, drive the mile or so to the car park and then walk with them for half an hour back through the forest to your house. A few days later you have to do the whole process in reverse.

Now I’m all for making the parc traffic-free, but as people aren’t going to be driving once they are in the parc (cars aren’t allowed in the main areas anyway, such as round by the lake and the swimming pool) then why not let people park their cars in the ample space by their lodges and then just leave them there until they leave? The car policy actually doubles the amount of journeys made in the parc, as you have to go in and out four times rather than twice. French campsites such as Eurocamp and Pierre et Vacances allow parking by your caravan or tent while still keeping a safe and traffic-free site. 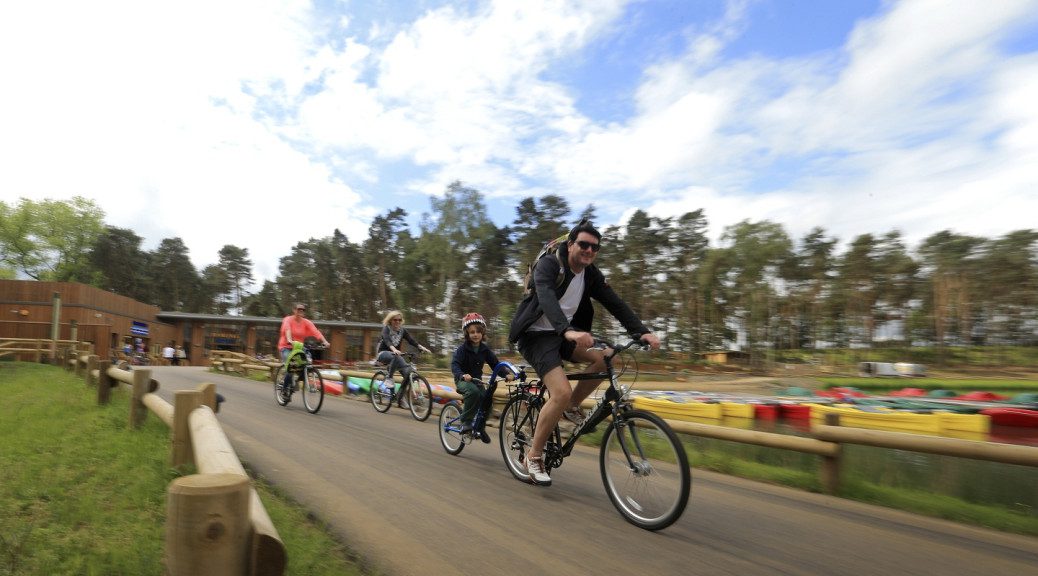 Bikes are a big part of the Center Parcs experience

When I arrived on Saturday morning, there was a steady procession of people trekking through the pouring rain from their cars back to their lodges which is no way to start a holiday, and ending it on Monday morning doing the whole process in reverse, again in the rain, was not a great way to end it.

Where to stay at Center Parcs

If the car issue was a negative, then our accommodation for the long weekend was a huge positive. We were staying in ‘new style three-bed executive’ which was really incredibly plush: three large bedrooms, two doubles and a twin, all with immaculate ensuite bathrooms (one bath, two walk-in showers) and a main living room with a massive flatscreen TV, glass-topped dining table, a wood-burning fire and a kitchen space running along one wall which had everything you could want: a fridge, dishwasher, lots of cupboards, cutlery and crockery, coffee machine and even a separate wine chiller. 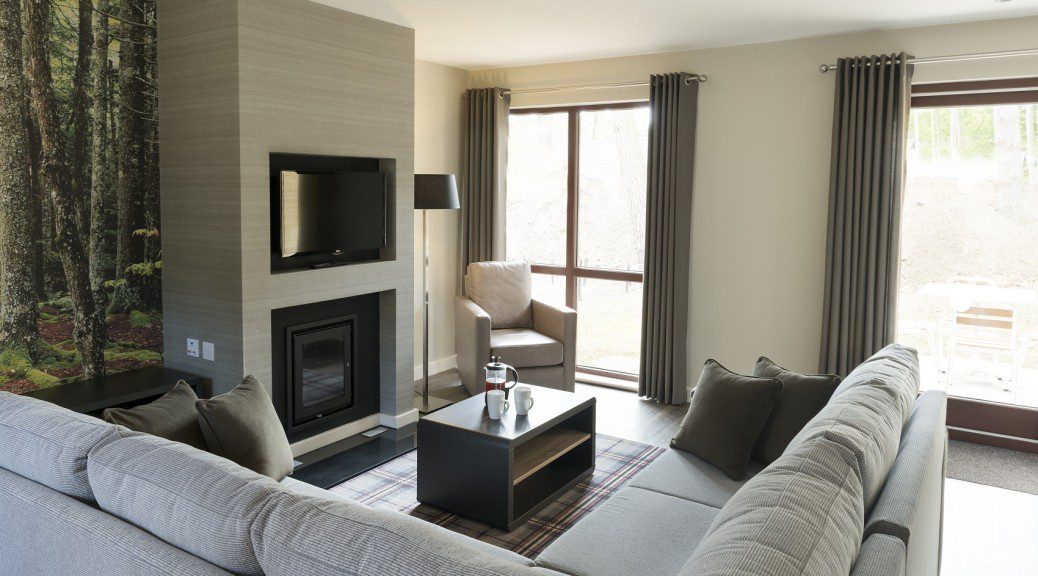 Inside an incredibly smart executive lodge

We were welcomed with a groceries pack which contained all sorts of delights from wine, beer, sausages, bacon, bread and rice crackers. There was also a daily maid who was extremely friendly and helpful, providing extra towels within minutes. Outside there was a table and chairs for alfresco dining, space for a barbeque and even a sauna, extremely handy to warm up as the weather had really turned cold even if not quite aligned with Center Parcs’ self-proclaimed ‘green’ credentials. There was free wifi throughout the site which was really useful in keeping track of everyone throughout our stay. 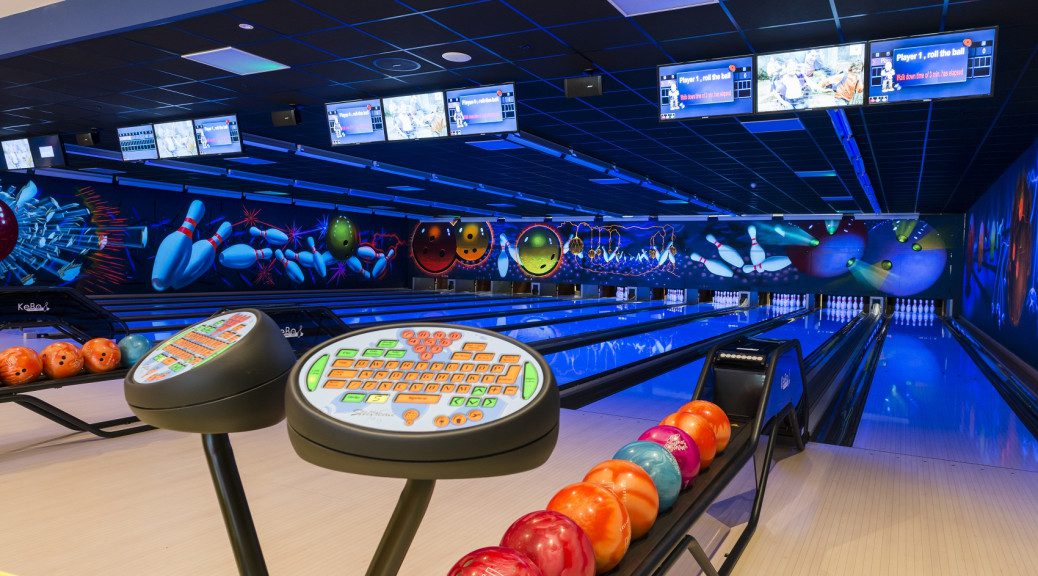 One of two bowling alleys at Center Parcs

However it did mean that it could show off all the indoor possibilities, such as badminton, squash, rock-climbing and ten-pin bowling, and the sub-tropical swimming paradise really came into its own. The entire park descended upon it on the rainy Saturday morning.

While it was crowded to the point of running out of rubber rings for the slides, it was great fun and never felt too unpleasantly busy. It wasn’t actually as warm as I thought it would be, so you had to wrap up or keep on moving, but with excited children sitting around was not much of an option anyway. 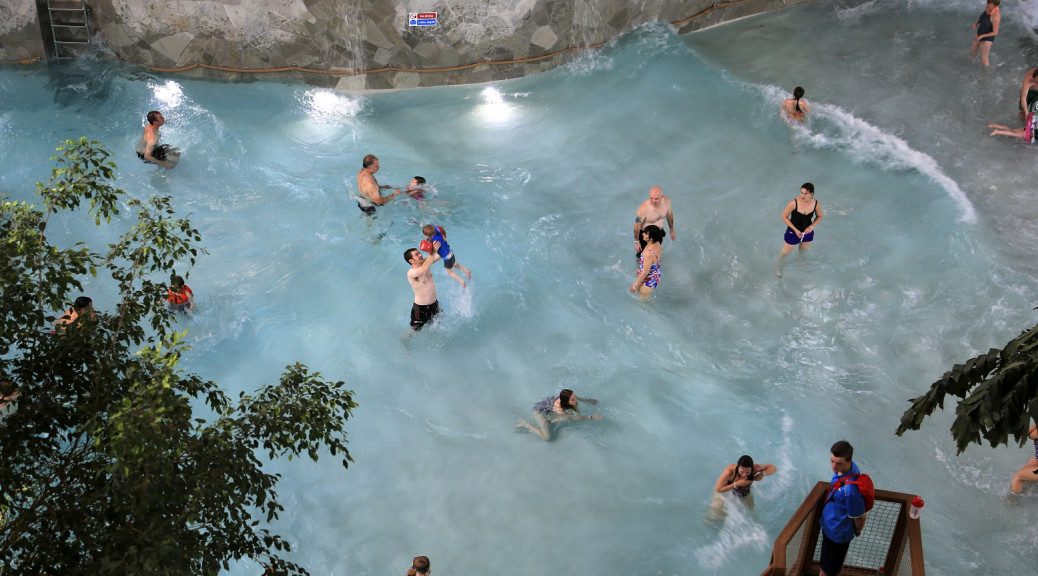 The waves were very popular, and heralded by a pirate call

The slides were a great hit with the kids while being fun and fast enough for grown-ups too, the staff were friendly and helpful and everything from the wave pool to the Venture Cove were greeted with shouts of joy from the smallest members of our party.

When we finally headed outside again it was to a Laser Combat session which was in the forest the far side of the park. This was also great fun in spite of the pouring rain, basically involving shooting at the opposing team before you got shot, all while sprinting between trees and hiding behind wooden fortresses. 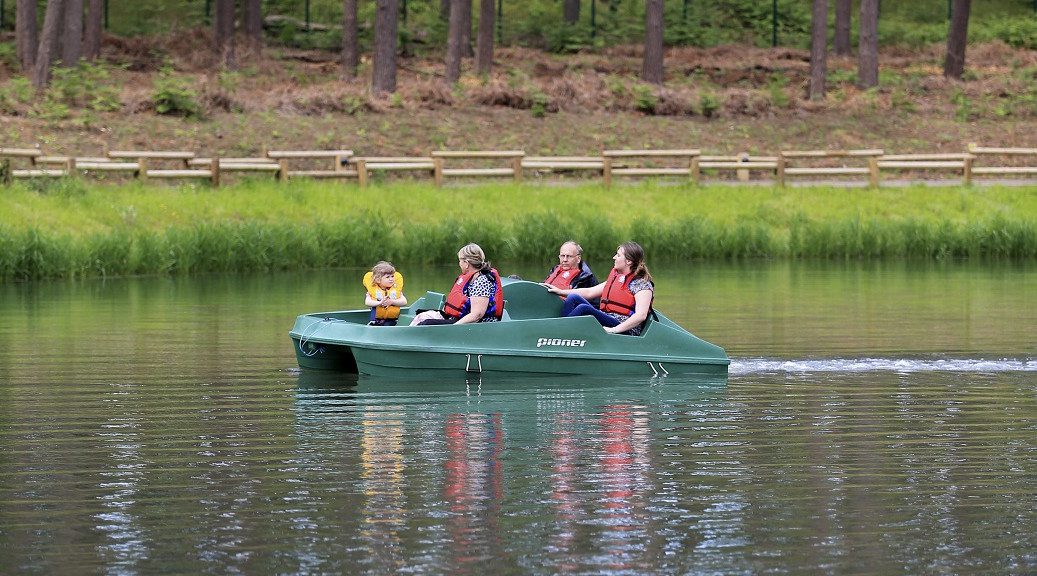 The next day we went out onto the lake in a ‘katakanu’ which was like two canoes strapped together and seats six and a pleasant enough half hour was spent with the children shouting orders like ‘Turn around!’ ‘Go backwards!’ and the grown-ups attempting to paddle without crashing into the bank. There was also the options of windsurfing, paddle boarding and raft-building, but at a hefty cost, as with everything in Center Parcs.

While everything was discounted on the preview weekend you could still get through some serious amounts of money on top of your food and accommodation bills. When I visited, half an hour katakanu hire cost £17.50.  Laser combat cost from £22 a person and paintball from £20. Bike hire was £25 for adults and £18 for children, so a family of four was looking at just under £100 just for bikes, even without helmets (which cost extra when they should be included in the price). Bring your own if you can! 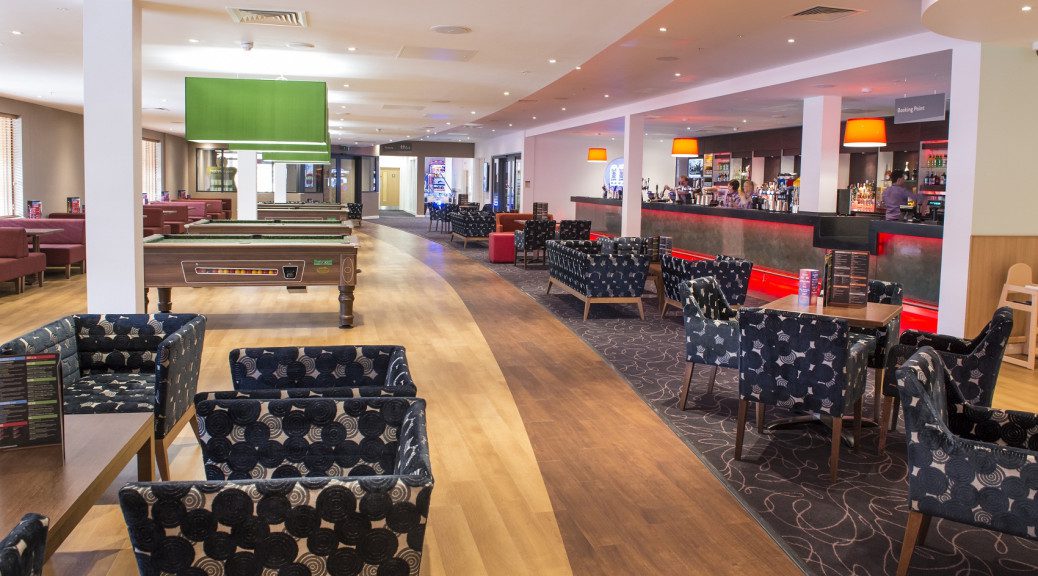 The sports bar at Woburn Forest

Bowling was £29.50 for 45 minutes for up to four people, fencing from £16.50 and even the ping-pong tables dotted around the indoor sports hall and which I assumed would be free, cost £6 for half-hour – check out the full price list for activities at Center Parcs. Be prepared to say ‘no’ a lot or budget accordingly. However if you are a regular Center Parc-er then you are probably rich enough not to care, and if you are on a once-in-a-lifetime trip then you are probably reconciled with breaking the bank, and there is a decent-sized supermarket on site so you don’t have to eat out at all if you are hoping to minimise the amount of money pouring out of your wallet.

One thing Center Parcs gets full marks for is the innovative wrist band which does everything from open your lodge to the swimming pool lockers (and stores money if you set it up that way, meaning you can’t claim to have left your wallet at home. You have been warned). 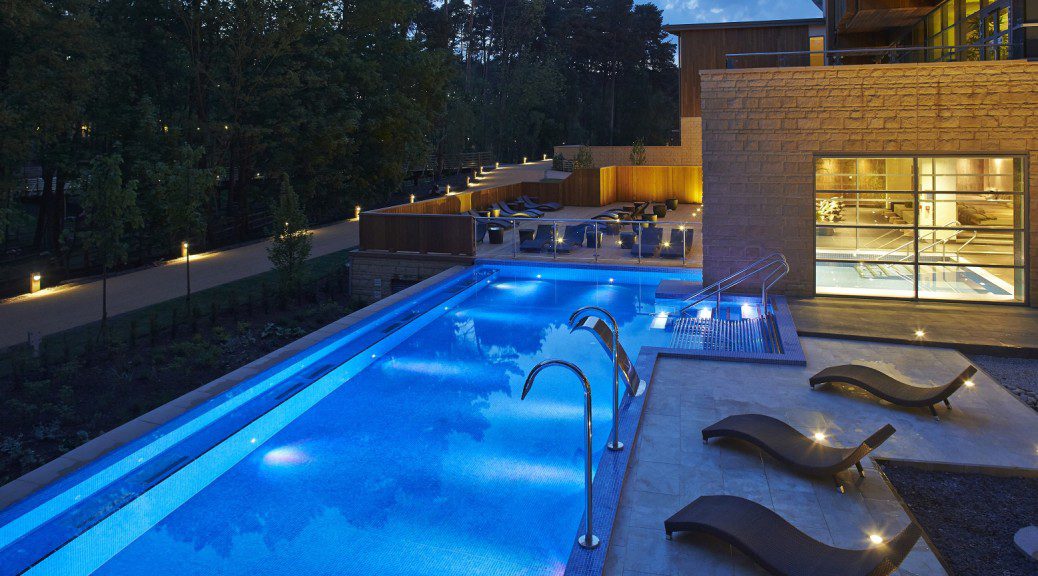 The Aqua Sana spa at Woburn Forest was a real highlight if a surprise too: who’d knew there would be such a high-end luxury spa experience in a family holiday? I would have thought that relaxing in its many impressively-designed steam baths and saunas would be rather un-relaxing knowing your children were marauding around outside, but there were certainly many happy-looking couples wandering around in fluffy robes and wearing looks of contented bliss. It’s not cheap – three hours at Aqua Sana costs £39 at current prices – but it was seriously good. There were salt rooms and steam rooms and saunas and hydrotherapy pools and just everything you could want from a high-end luxury spa.

Our weekend ended in the Center Parcs Monday morning rush-hour as everyone headed across the parc to return their bikes, to pick up their cars, to drive back to their lodges, to park their cars, pack up their houses and then drive out of the parc, all at the same time. But that’s the Center Parcs way. And people cannot get enough of it.

How to get to Center Parcs Woburn Forest and booking information

If you like family-friendly activity holidays then you’ll love Mark Warner or Tui package holidays – check out some of my reviews below: River-rafting and zip-lining, my action-packed week in Jamaica; A five-star week at the Mark Warner resort, Rhodes;