There was something about P&O Britannia cruise ship which reminded me of Las Vegas, and it wasn’t just the casino. It was partly the vast amount of food on offer on board at its 13 restaurants onboard P&O Britannia – the stories about gaining weight on cruise holidays seemed all too plausible – but being able to leave your room and go out for dinner at a restaurant, or to a bar, or to the theatre or a nightclub, all without stepping outdoors, seemed exactly like the hotels of Vegas.

[Note: this review of P&O Britannia cruise ship was first published in 2015 so some details might now be out of date]

Our holiday on P&O Britannia

But unlike Vegas, which is after all, stuck in the middle of a desert, our own bubble-like world was moving: in our case floating from Guernsey to Bilbao and La Coruna in Spain, and heading home via La Rochelle and Isle de Re in France. As Britannia is so vast, you never get the sense of being at sea, so every morning it was a lovely surprise when you found a different view greeting you from your balcony. It was an almost entirely hassle-free holiday onboard a luxury cruise ship.  For a cruising first-timer such as myself, I could certainly see the appeal. 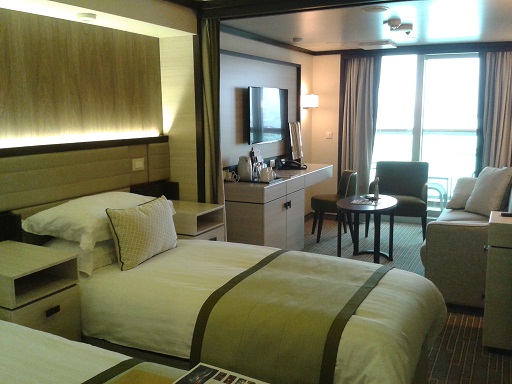 Our cabin was very smart, with a balcony where the view changed every morning

Going on a cruise for the first time

I had been rather nervous about the prospect of spending a week on a ship. I knew next to nothing about going on a cruise holiday in Europe (or anywhere else) and what a week on a cruise ship looks like. My perfect holiday abroad would see me heading off into the unknown, reading maps and checking timetables, buying and cooking local food, moving on at a moment’s notice and often ending up somewhere completely unexpected. The thought of sharing my holiday with 3,600 other holidaymakers, not to mention 1,400 crew, filled me with alarm, even if it was a luxury cruise holiday. Would there be queues to board, to eat, to drink, to explore?

Even the P&O Cruises Personaliser on the P&O website cruise holiday planner sent me into a spin, as with so many things to organise in advance  – dining options, excursions, spa treatments – there seemed to be no space for spontaneity. 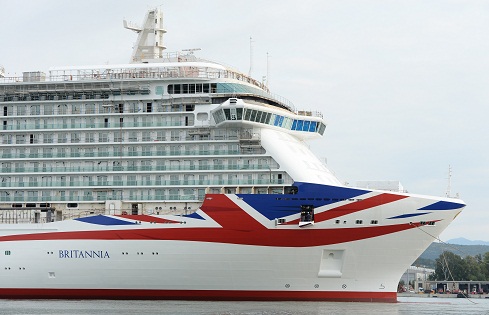 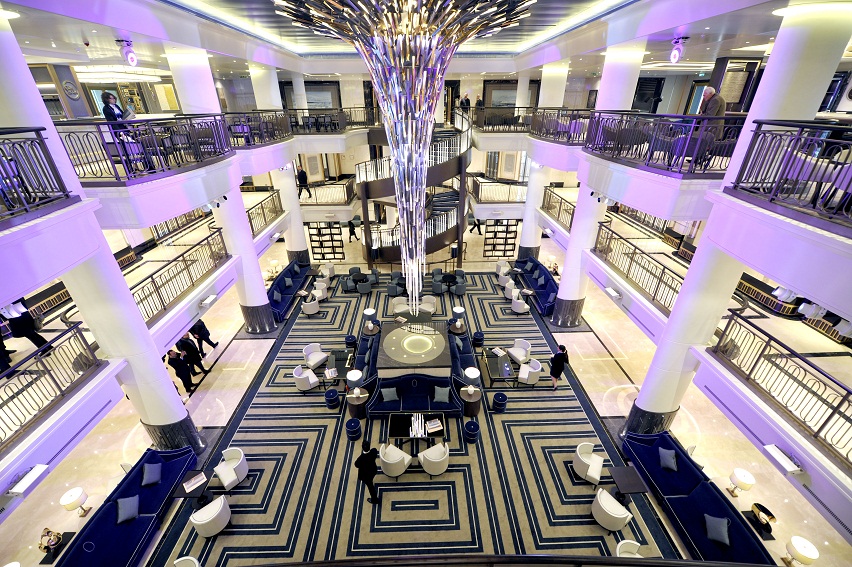 The atrium is the central point of the ship, with shops and bars circling its central starburst sculpture

Our A-deck cabin was very smart, with a vertigo-inducing balcony (we were on the 15th floor), two TVs , a fridge, and smart en-suite with a bath and shower, and our steward for the week worked incredibly hard in keeping it clean and tidy throughout the week. Our only gripe with the bedding arrangements were on the small side for a group of four: there were twin beds in the bedroom area and a sofa which turns into a double bed in the lounge part, so if you have teenage children who don’t want to share, or younger children who go to bed at different times and wriggle a lot, then the grown-ups will end up sharing on the sofa bed, which doesn’t seem ideal for a luxury holiday.

There were two pools on the lido deck, with a splash zone in the middle for babies, while the teenagers had their own pool at one end of the ship and there was another for adults only

The bars onboard P&O Britannia

Another fear, about having to queue for drinks and food, never materialised: the bar was never over-full and service was speedy, even on popular karaoke nights, and service at the Peninsular and Oriental ‘Freedom Dining’ restaurants, which didn’t attract an extra charge, was excellent. It can’t be easy serving that many people but it was incredibly fast and the food was of a very good standard. 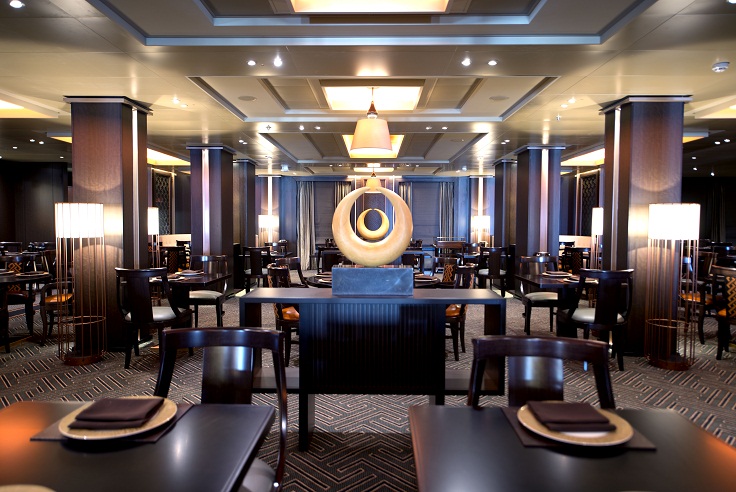 We also tried Atul Kochhar‘s Sindhu restaurant which was excellent, and throughout the week also made our way around the various other dining options, from fine dining at the Epicurean restaurant, to the buffet which seemed to be open pretty much all the time, to the handy poolside bars which did a great line in pizzas and take-away sandwiches and salad boxes for excursions or impromptu picnics. 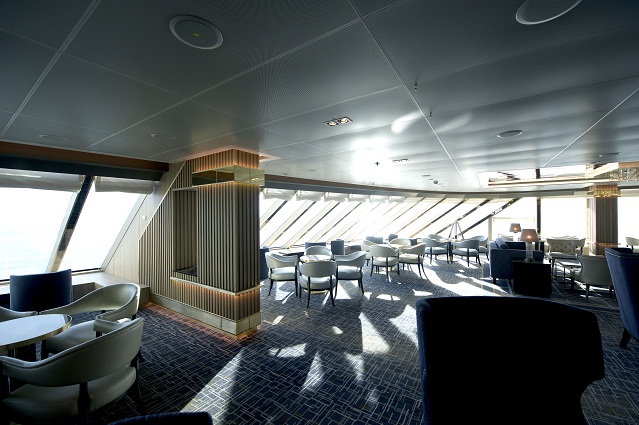 There was certainly no fear of going hungry on this ship – or thirsty, for that matter, there were 70 different types of beer at the main bar and 20 different gins in the Crow’s Nest, although I also found the Crow’s Nest to be an ideal spot for a quiet morning coffee. 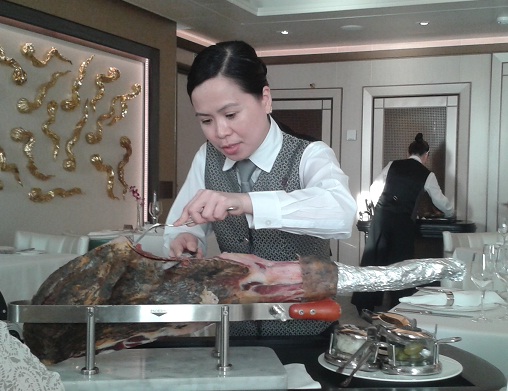 Fine dining at the Epicurean restaurant

The children, aged six and 10, loved their kids clubs where they went every morning, although that was probably because apart from one cookery class they seemed to spend all the time playing computer games: they would emerge square-eyed at lunchtime. The afternoons then were a chance to get some fresh air, either on deck playing ping-pong and shuffleboard (an unexpected hit) or having a dip in the surprisingly deep swimming pools (I couldn’t touch the bottom, so not great for young learner swimmers which was a shame). There was also an adults-only area on this P&O cruise ship called The Retreat, a separate spa with a sauna, hydrotherapy pool and all sorts of pampering options, and a well-equipped gym where the treadmills looked out onto the open ocean. 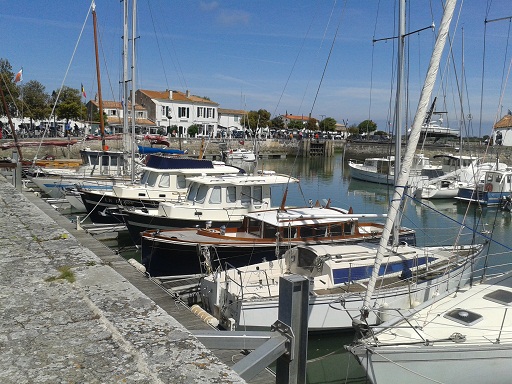 A marina on the beautifully tranquil island of Isle de Re

There were two days at sea, so the other days were a great chance to get off the ship and explore: from market day at St Peter Port in Guernsey, to La Rochelle and Isle de Re in France, and La Coruna and Bilbao in Spain. By waiting until the afternoon to visit Guernsey which was accessible by tender we missed the queues, as people were being asked to wait for a few hours due to rough weather, but mostly it was a case of just stepping off the ship, or getting a coach into town – travel into Bilbao and La Rochelle was speedy and efficient, so that was another travel worry gone. 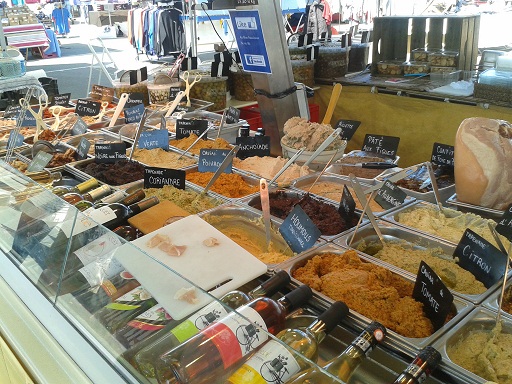 The fresh food market at Isle de Re

Ease of travelling on a cruise holiday

While there were families on board (it was half-term week), it was obvious from the majority of the other passengers that cruising is still an older person’s game and you could see why: it is an incredibly easy way to travel and you are well looked after: every night the programme of the next day’s events was posted through your door and included pub quizzes, dancing lessons, fitness classes, cookery demonstrations and talks on dealing with back pain, and the single travellers were catered for too with a daily get-together. 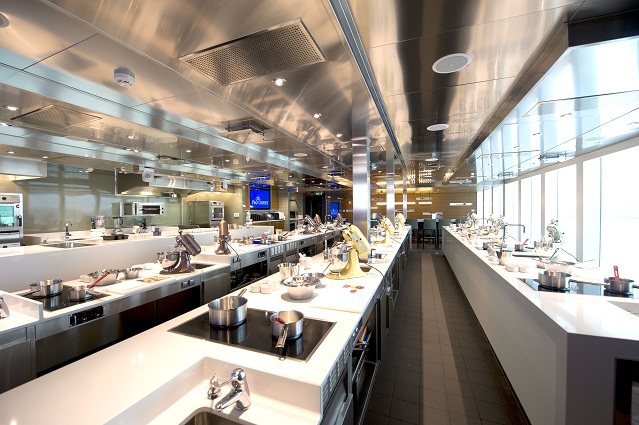 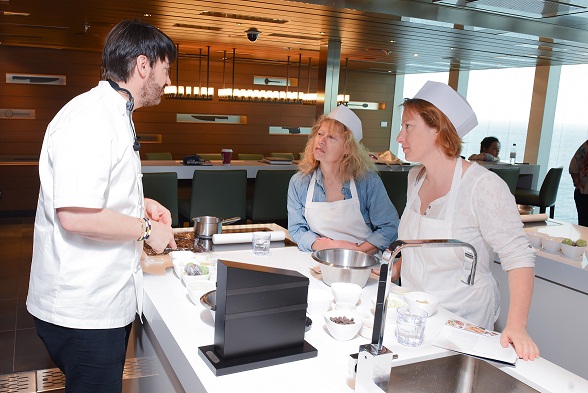 Evening entertainment centred around food and the massive theatre where singer and TV presenter Jonathan Wilkes was playing to packed houses, and the more intimate space of the Limelight Club cabaret where we ate while being entertained by 80s star Jaki Graham. 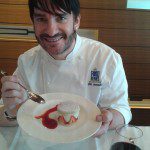 Highlights for me were a cookery class and evening dinner with one of P&O’s ‘Food Heroes’ Eric Lanlard who was a delight to spend time with; getting dressed up with my ten-year old nephew in black tie for one of the two formal nights, buying some great French food at an open-air market in Isle de Re and sunbathing on the beach at La Coruna; and finding a free juke box which has every single weekly chart from the 1960s to the present day – great fun for a trip down memory lane.

I did find it frustrating to have to be back on board by 5.30pm each night rather than keep on exploring and maybe watch the sun set over a drink or two in a local bar, but P&O does offer cruises where overnight stops in places is possible, so there are chances to eat out if you want – meanwhile the sunset sailing parties on deck with dancing and entertainment by the crew seemed very popular.

Britannia is vast, which is good as it never once felt crowded, but I’d also like to experience a smaller ship where you could anchor in secluded bays and dive straight off the side, and get to know your fellow passengers over the week rather than just exchanging small talk in the lifts. However as a first-time cruise experience goes, it was certainly a memorable one.