Note: this article about the launch of P&O Britannia was written in 2015 – how time flies! If you want to read about what it’s like to stay on P&O Britannia then click here

The day was bright and sunny for Her Majesty and Prince Philip as the Royal party arrived to launch P&O Cruises new ship P&O Britannia last Tuesday, a welcome change from the drizzle and rain of the previous day. 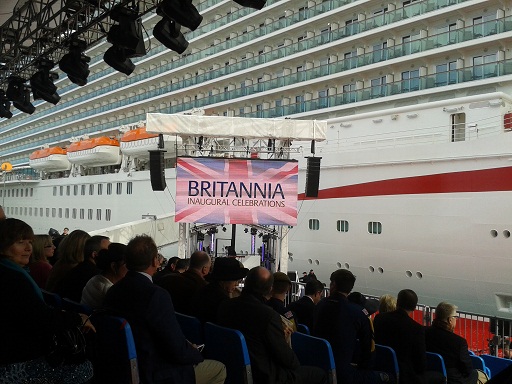 Before the official naming ceremony took place though, the seated guests (thoughtfully supplied with hand warmers and mugs of hot spiced cordial) were treated to some acrobatic ‘zorbing’, the exuberant Red Hot Chilli Pipers and the Bands of Her Majesty’s Royal Marines and The Irish Guards.

There was a brief speech from David Dingle, chairman of P&O Cruises’s parent company Carnival, a prayer from the Bishop of Southampton, and then the invitation for the Queen to name Britannia from Captain Paul Brown, with proceedings ably and entertainingly MC’d by comedian Rob Brydon. 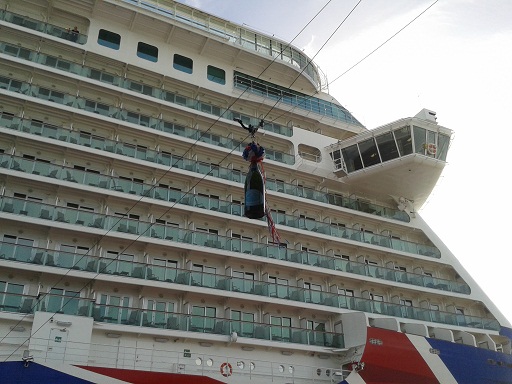 The Nebuchadnezzar of sparkling wine from the Wiston vineyard in West Sussex looked as if it were travelling worryingly slowly down the wire towards the ship once Her Majesty had pushed the launch button, but in the end it broke on the side with a emphatic smash. 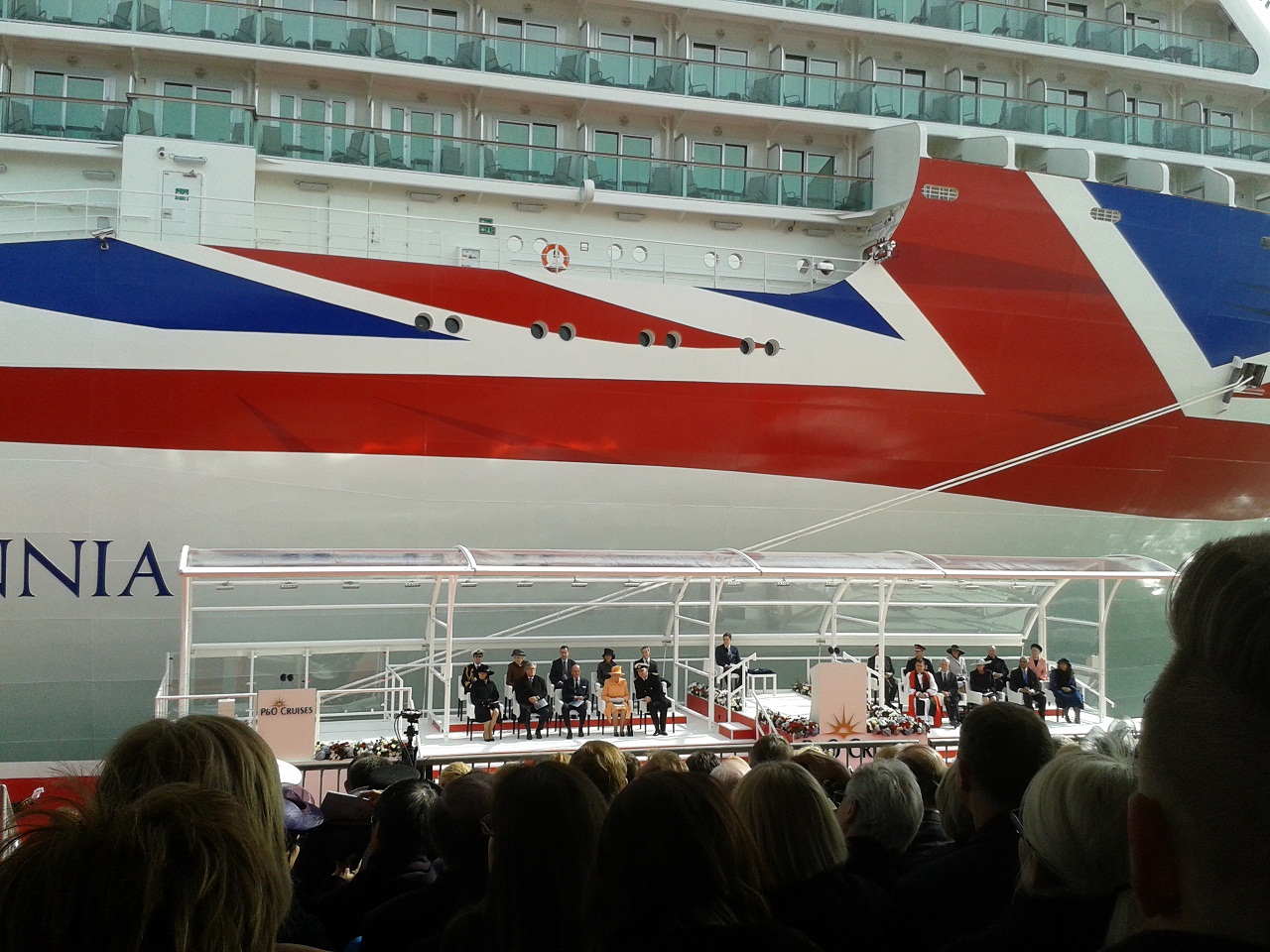 Britannia made for a rather impressive backdrop for Her Majesty 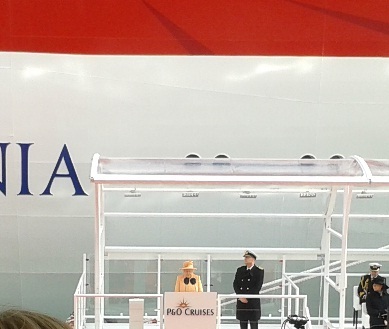 ‘I name this ship Britannia’

The crowd burst into applause, were showered with confetti and then treated to a rendition of the National Anthem by singer Laura Wright. Then it was time for the VIPs such as Britannia’s Food Heroes (including Olly Smith and Marco Pierre White) to go and be presented to the Queen.

Rob Brydon said what we’d all been thinking: ‘The Very Important People have now gone – so there’s just some important people and well, just people left here now…’  and after a burst of Rule Britannia it was time to head off. 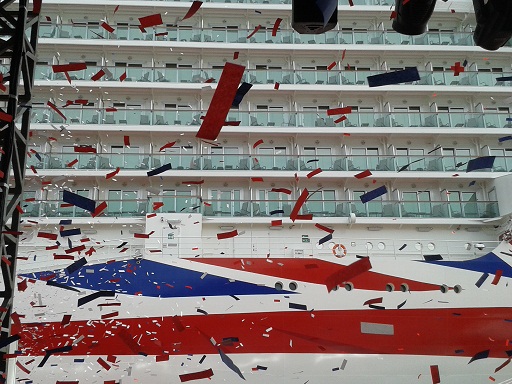 The ceremony capped a pleasant 24 hours on the ship, in which I explored the almost empty ship on the Monday and sampled the canteen fare in the Horizon restaurant. 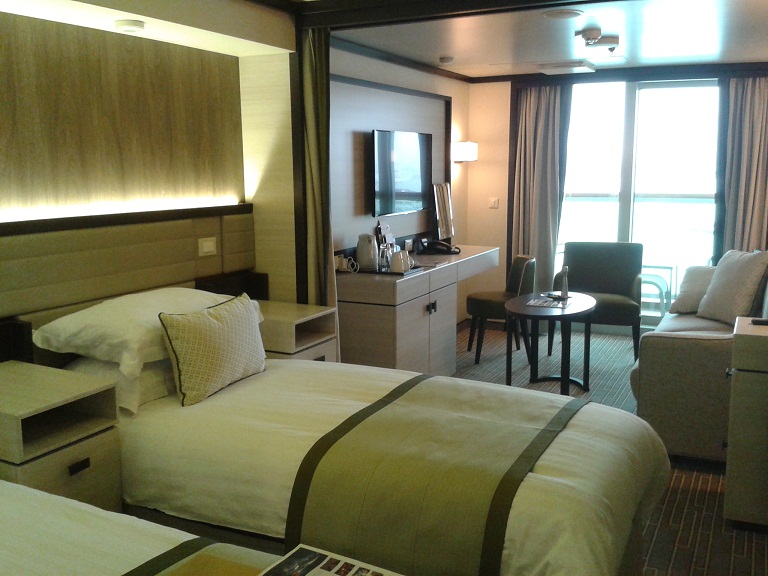 My rather smart cabin on ‘A’ deck

I had checked into my room, a very smart double cabin on the top deck, and then enjoyed pre-dinner cocktails with several thousand other people in Britannia’s ‘starburst’ atrium while being entertained by the ubiquitous Mr Brydon.

Rob Brydon addresses the throng in the central atrium

Then it was time for the launch dinner at the Peninsular Restaurant – highlights of which were the final course of Eric Lanlard‘s desserts and Charlie Turnbull‘s selection of artisan cheeses with a ponoma cider brandy chosen by Olly Smith. 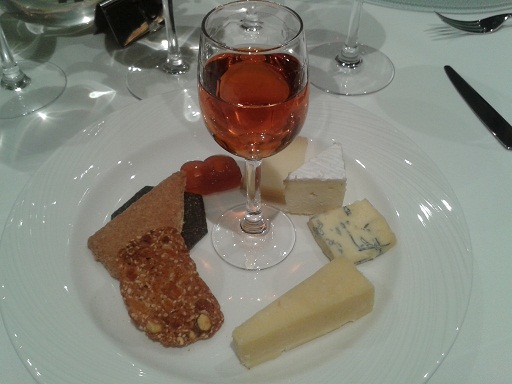 Some delicious artisan cheeses and a very pleasant cider brandy

When I finally left the ship and headed back to reality, I didn’t go empty-handed: all guests were given a bottle of Wiston bubbly and a pair of crystal glasses, plus we got to keep our insulated coffee mugs. How very civilised! 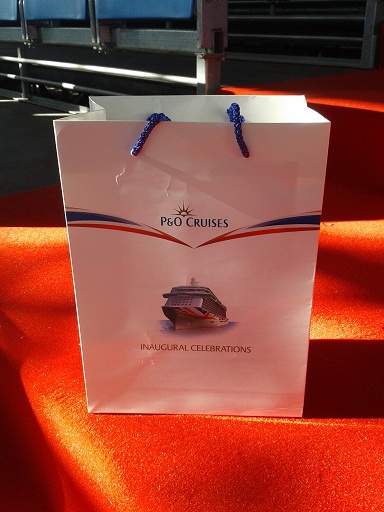 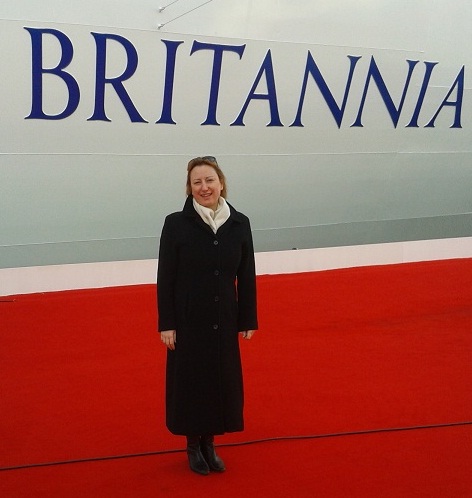 Find out what it’s like to go on a cruise on P&O Britannia here!

Cruising for the first time: a week on P&O Britannia luxury cruise ship

Island-hopping (and relaxing) in the Aegean with SCIC Sailing