It was an interesting introduction to my holiday of a lifetime learning to dive in the Cayman Islands: ‘The thing about the Cayman Islands is that the best sights are underwater,’ said my taxi driver as he drove along the dusty road from the airport. ‘There’s just not a great deal above sea level.’

This wasn’t quite what I’d expected from my stay in the Caribbean and after a week in the Caribbean exploring the trio of Grand Cayman, Cayman Brac and Little Cayman islands which make up the Cayman Islands, I wasn’t sure I agreed with him. 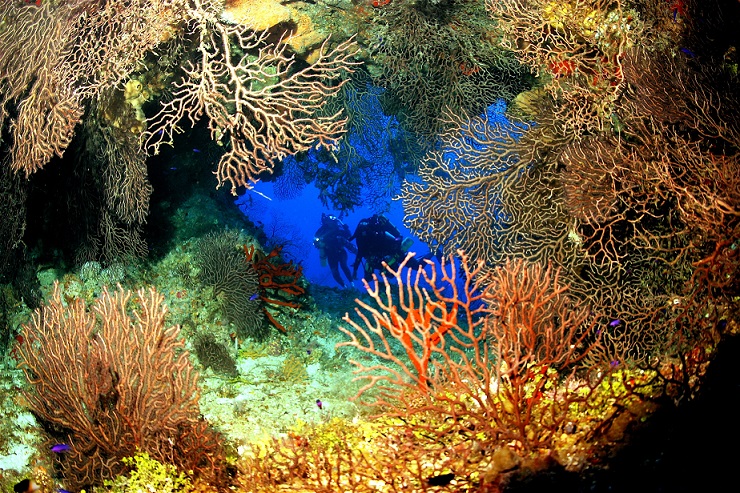 A holiday of a lifetime in the Cayman Islands

While the Cayman Islands – the name comes from the word for crocodile, although they were originally named Las Tortugas by Christopher Columbus due to all the turtles he saw swimming there – lack the ‘bling’ factor of their Caribbean neighbours such as Barbados and St Lucia or the flamboyant night-life of Jamaica or Cuba, it is certainly not just a diving-only destination. There is great diving in the Cayman Islands of course, but there’s plenty more to do and see on this gorgeous Caribbean island. 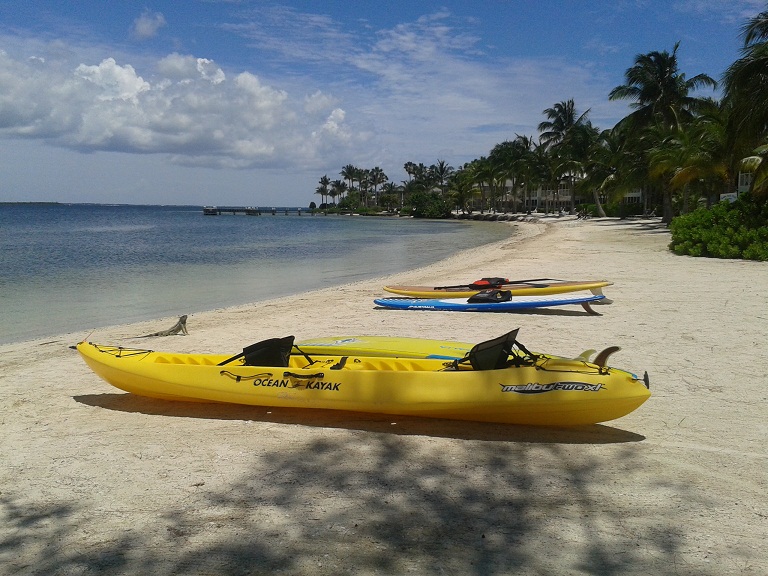 The beaches on the Cayman Islands are certainly not overcrowded

With spectacular beaches plus luxury hotels, a vibrant restaurant scene including a ‘Flavour Tour’ on Grand Cayman where you can visit four or five different restaurants in a night, sampling the menu of each, and the deliciously warm Caribbean climate, there is certainly more than enough to keep landlubbers happy. 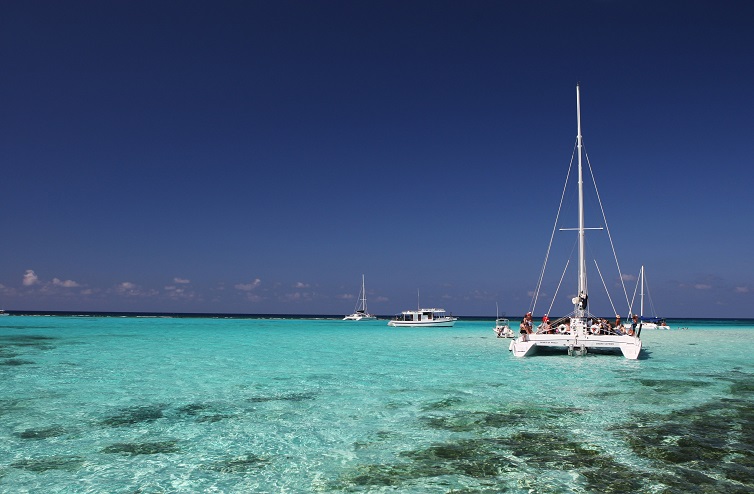 Al fresco lunch on the beach

Learning to dive in the Cayman Islands

However diving is what the Cayman Islands are best known for and the main reason for my trip. As a complete novice at scuba-diving I was starting from scratch and so before I left the UK I spent two evenings submerged in a swimming pool in central London with dive school Oyster Diving, being taught the basics of scuba-diving, including how to get to grips with the breathing apparatus and ways of communicating underwater.

The beach by my hotel on Grand Cayman

I completed the theory part of the course online, which covers technical aspects such as the effects of depth and pressure, so my precious hours out in the Caribbean wouldn’t be spent in a classroom. Eight hours of late night studying later I had passed all the modules and was ready to go.

The 11-hour British Airways flight to the Cayman Islands included a refuelling stop in Nasser, Bahamas and I was soon being driven to the Marriot Grand Cayman Beach Resort. Like other international hotel brands such as the next-door Ritz-Carlton – which does a very impressive breakfast – it was on the stretch of golden sand known as Seven Mile Beach on the western side of the island. 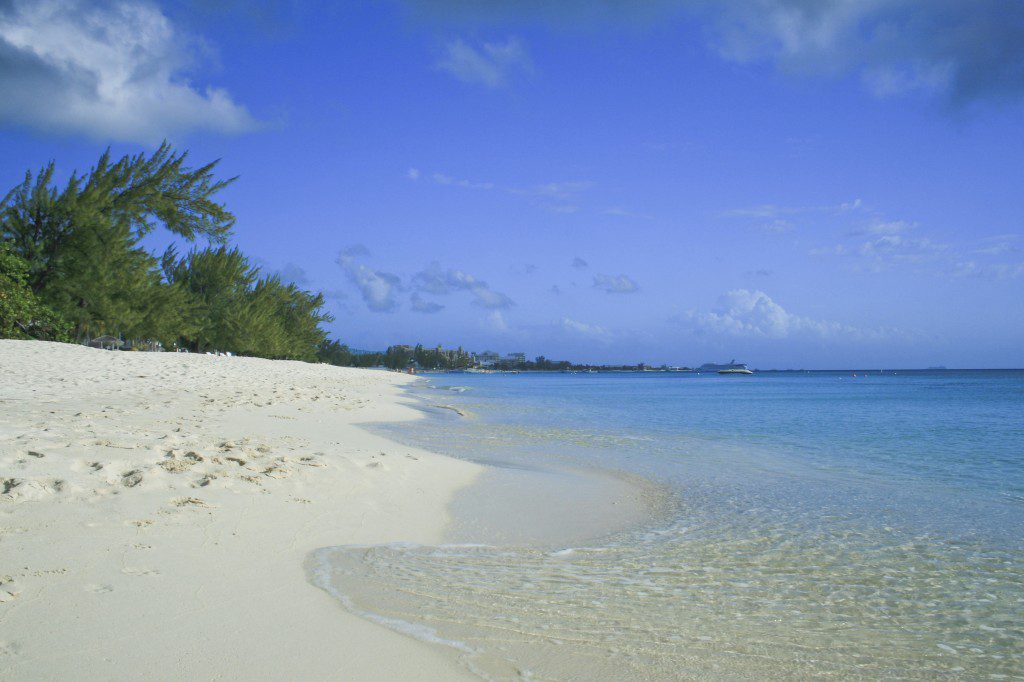 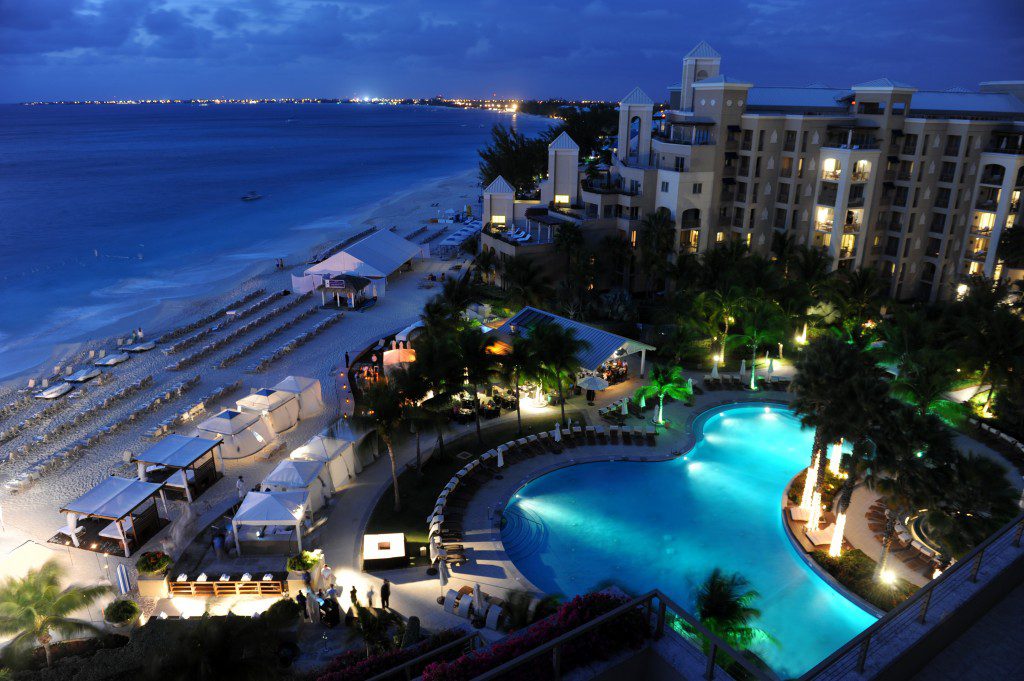 ….and Seven Mile Beach by night

If you wanted more of a local atmosphere then just a short taxi ride away was the island’s capital George Town and many friendly restaurants where you could dine al fresco and watch the sun setting across the ocean. I soon swapped the opulence of the hotel resort for the more down-to-earth dive hostel at Cobalt Coast near the top of the island where I was going to try and get that all-important PADI open water qualification.

Getting a PADI qualification in Grand Cayman

My instructor Jane, who arrived sporting a pink rash vest, pink flippers and a pink mask, kitted me out with all the diving paraphernalia I needed: oxygen tank, buoyancy vest, weights and flippers and mask. Once I’d worked out how to put it all on, it was time to put all that learning into action as I lumbered slowly along the dock and clambered down a ladder to the open sea.

This was better than a London swimming pool! The sea bed was a forest of waving plants and while the sensation of swimming underwater, the movement of the waves and the unexpected (to me) noise of breathing through a bubble-emitting mouthpiece did take some getting used to, it was an incredible experience, particularly spotting turtles, crabs and brightly-coloured fish in their natural habitat. 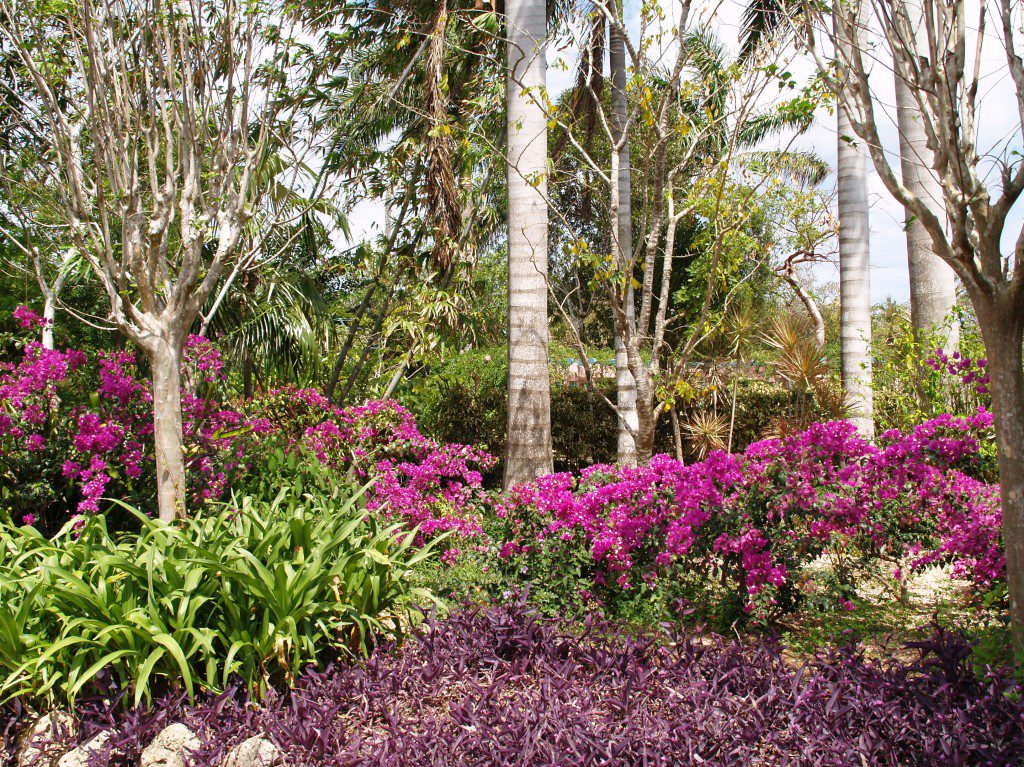 Flowers at the Botanical Gardens

There was more diving planned for the smaller island Little Cayman, but we had more to see on Grand Cayman first. There was the Queen Elizabeth Botanic Park and the Blue Iguana recovery programme on the middle of the island, set up to save the native iguana from extinction and where we saw iguanas turn blue with happiness once they were fed;.

We also went on a night-time swim with luminescent sea creatures (and a couple of jellyfish, ouch) and a rather surreal visit to the Cayman Motor Museum and its 80-strong classic car collection of Norwegian shipping magnate Andreas Ugland where Ferraris mingled alongside Elton John’s Rolls-Royce and even the Batmobile from the 1950s TV series. 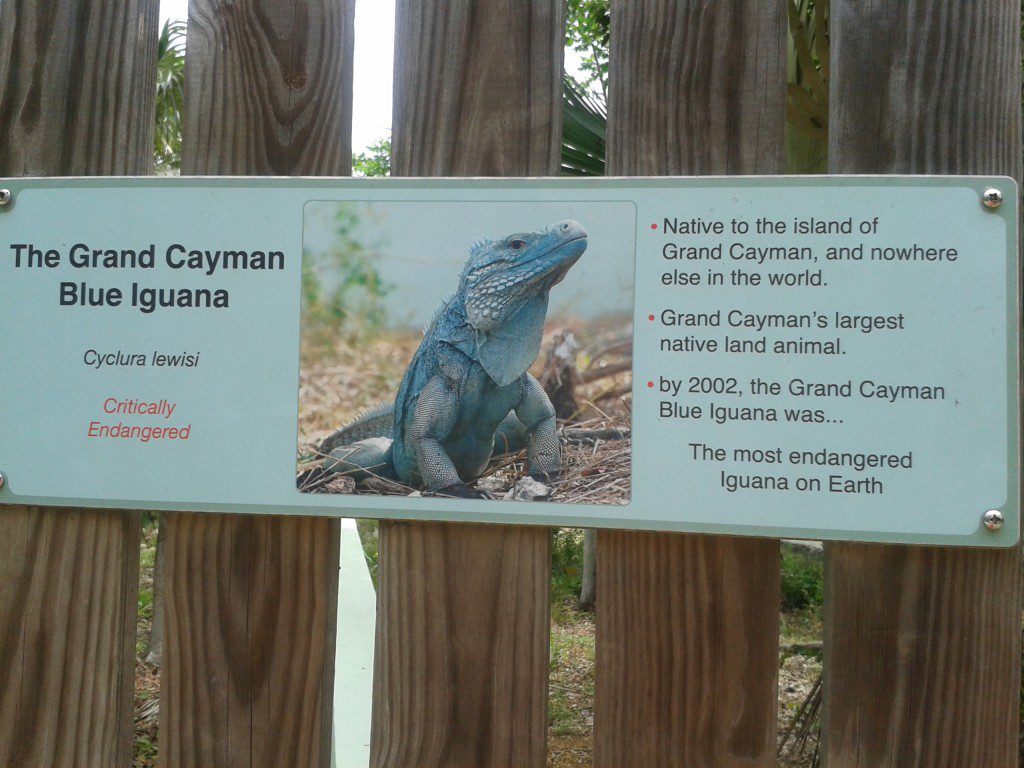 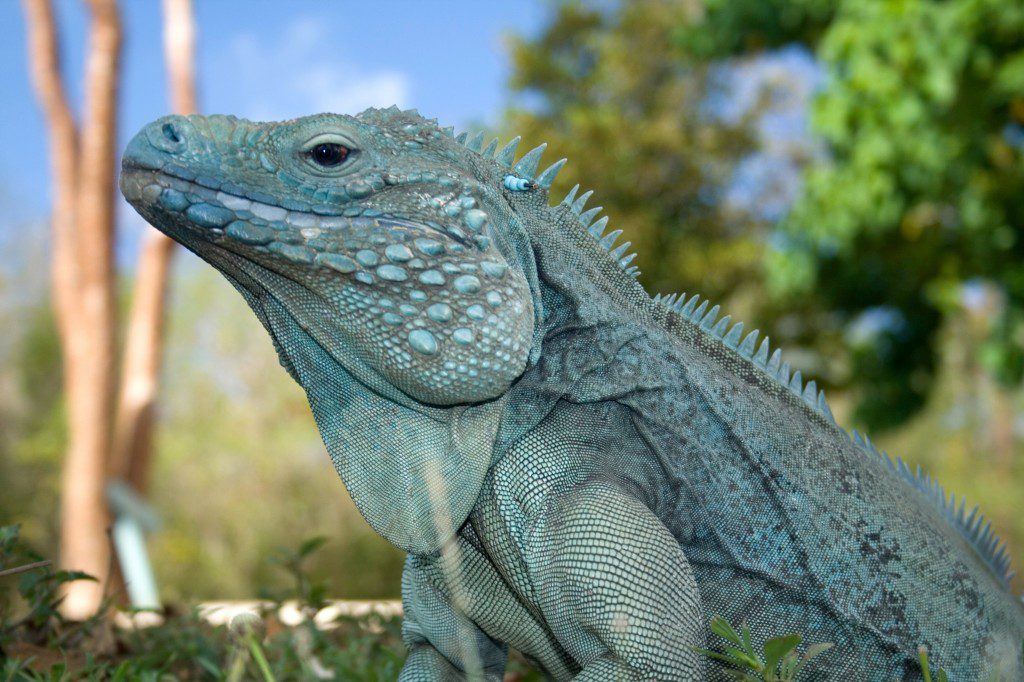 After two dives with Jane, in which I showed I could do various tasks such as take my mask and breathing apparatus off underwater, and ascend quickly but safely if I needed to,  I was awarded my PADI open water qualification which meant I could now go on dive trips.

Diving in Stingray City in the Cayman Islands

I made use of my brand new diving qualification straightaway to visit Stingray City, a slightly surreal experience which involved sitting on the ocean bed 10 feet underneath our boat while around 20 stingrays whirled around us. If you were brave you could feed them – I tried and discovered for myself the power of the stingray suck, enough to draw blood from my knuckle. 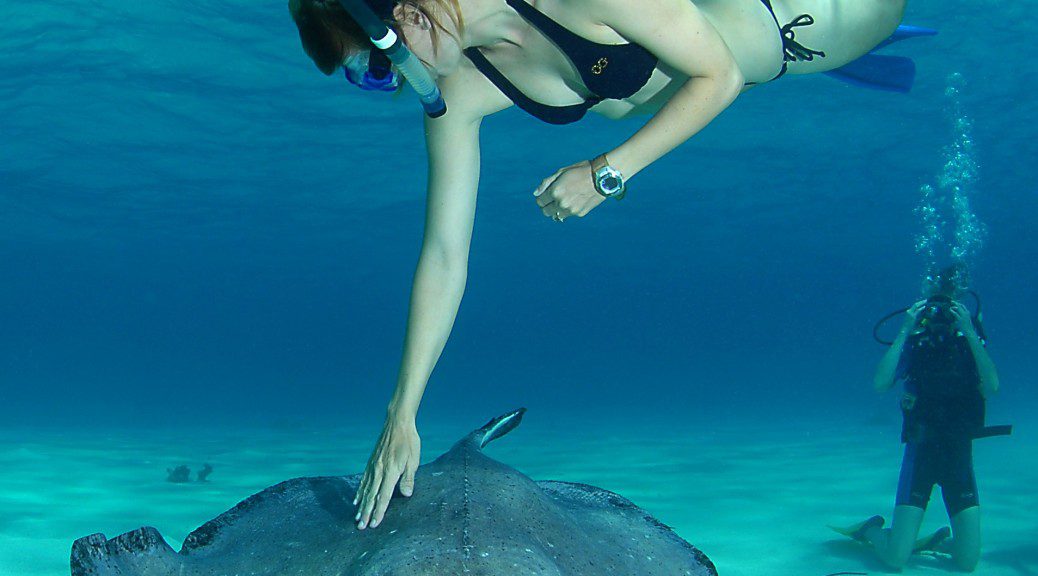 Midweek we caught the tiny 15-seated De Havilland plane for the 40 minute flight to Cayman Brac, which is just 12 miles by one and has around 2,000 inhabitants, compared to 52,000 people on Grand Cayman. 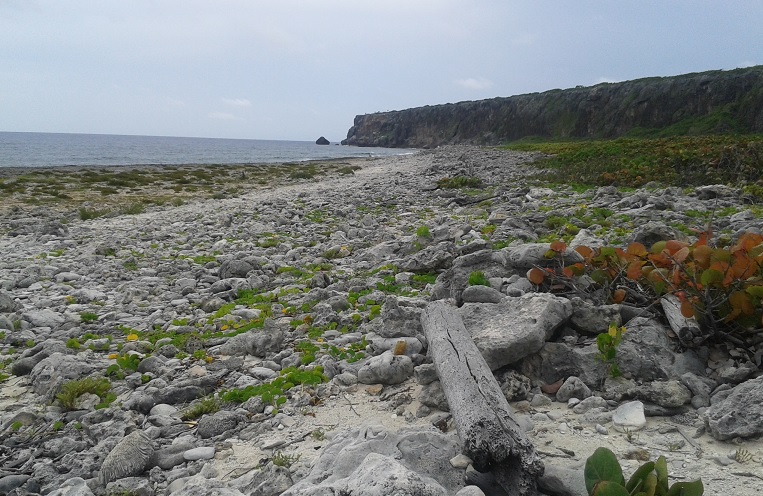 The bluff at Cayman Brac, the second of the islands we visited

However it looks positively crowded compared with Little Cayman, the smallest of the island group with a population of just over a hundred people (rather more iguanas) and my favourite by far.

The airport is tiny: you literally step off the plane, pick up your bags and you are already on the main road. There is no security fence, no terminal and no baggage carousel and when you’re waiting for your flight out, you go and get a drink in the nearby Hungry Iguana bar and you’ll get a phone call from the airport to let you know that your flight is ready to take off. You finish your drink, walk out of the bar and straight onto the plane – simple! 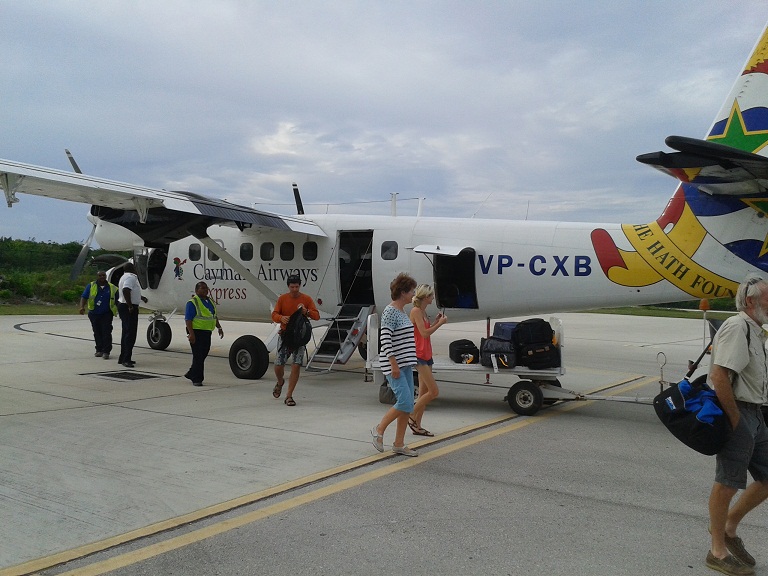 Our transport between the islands

We stayed in The Club, a group of luxury condominiums overlooking the ocean next to the Little Cayman Beach Resort and had the whole place to ourselves. It was incredibly relaxing – we swam and made rum daiquiris by day and dined under the stars on the roof of the Southern Cross club just a short walk along the beach at night. 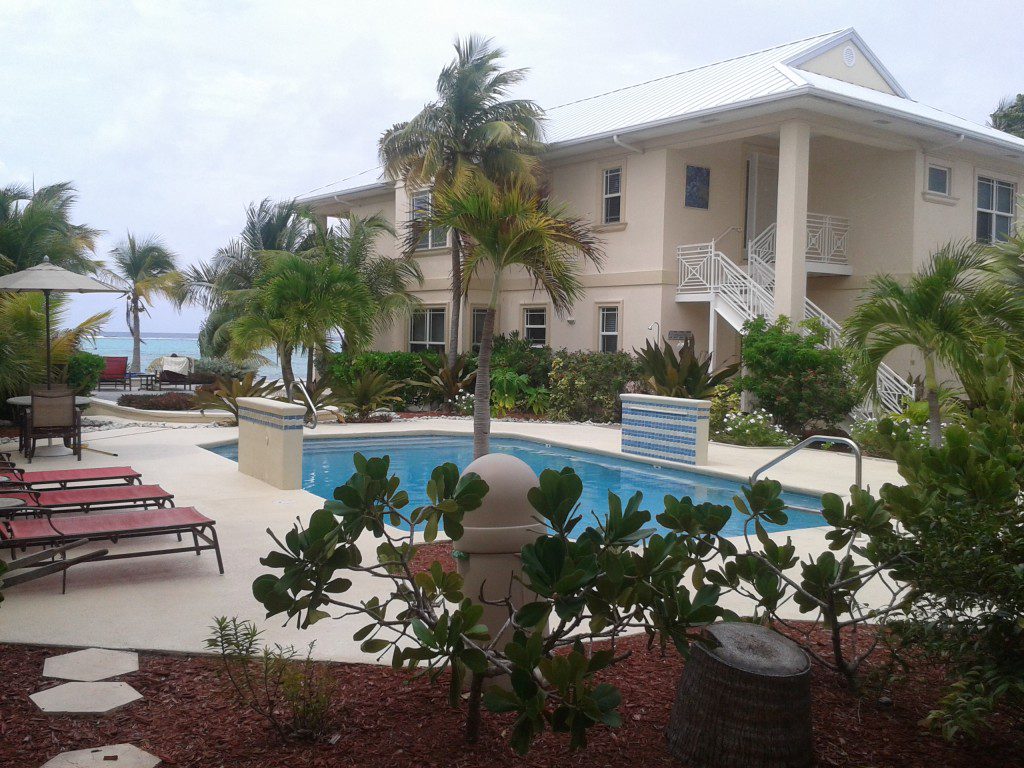 Our luxury condos at The Club, Little Cayman 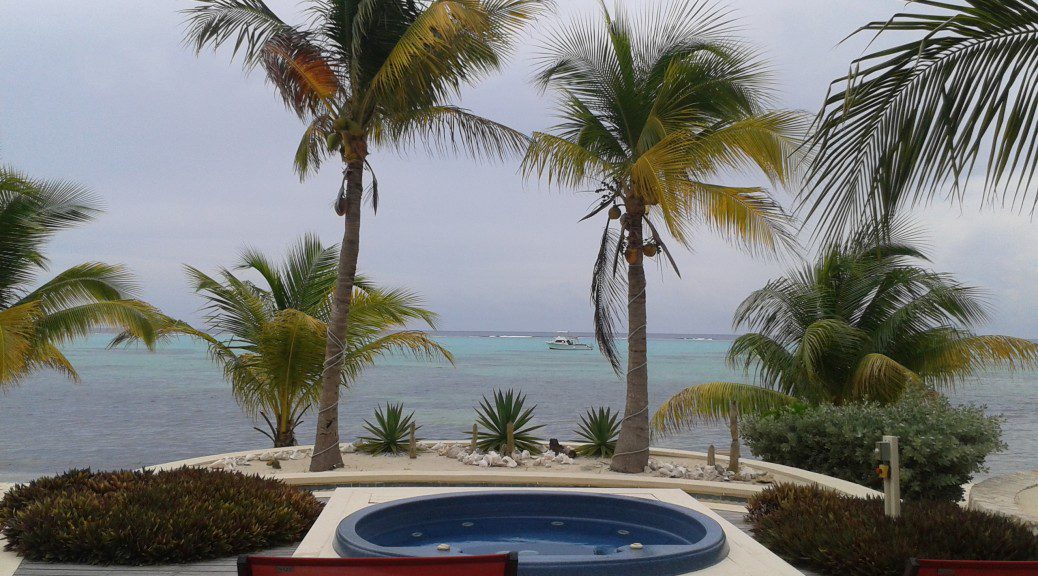 The hot tub overlooking the ocean

The view from our very own desert island

One day we kayaked out to our very own desert island, 100 metres offshore, bringing books and a picnic and enjoying the clear blue skies, white sand and 40 degree sunshine and later paddled back to watch the football on the beach bar television while drinking local beer Caybrew.

The Club had sturdy old bikes for us to travel around the tiny island – including cycling across the airport runway – and we spent one memorable evening at the Pirates Point hotel run by local legend Gladys Howard, where the guests tried to outdo each other making outrageous cocktails from the free bar. 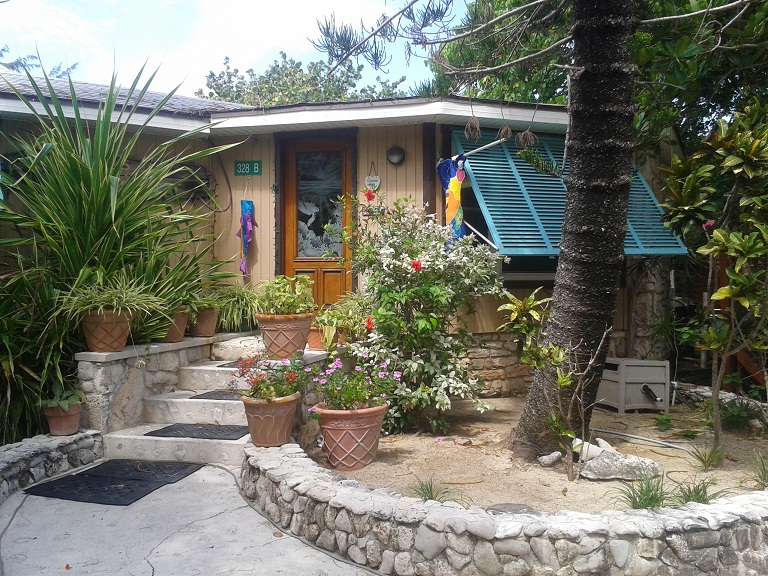 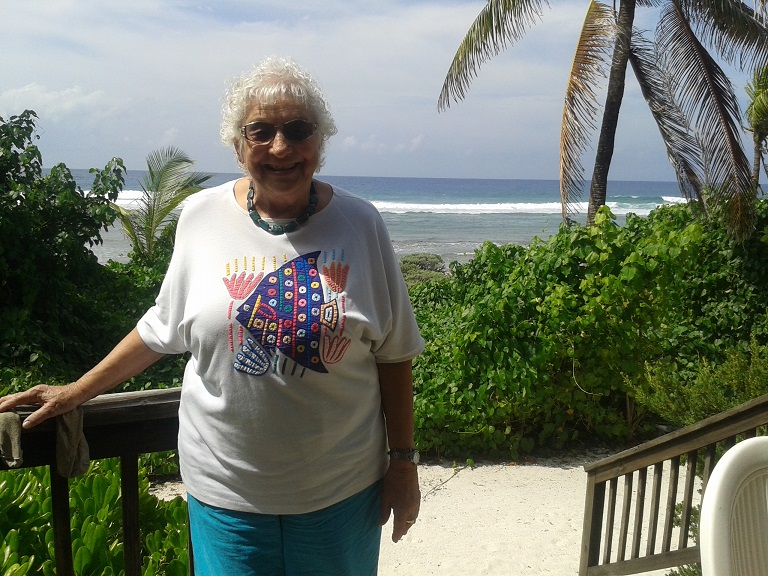 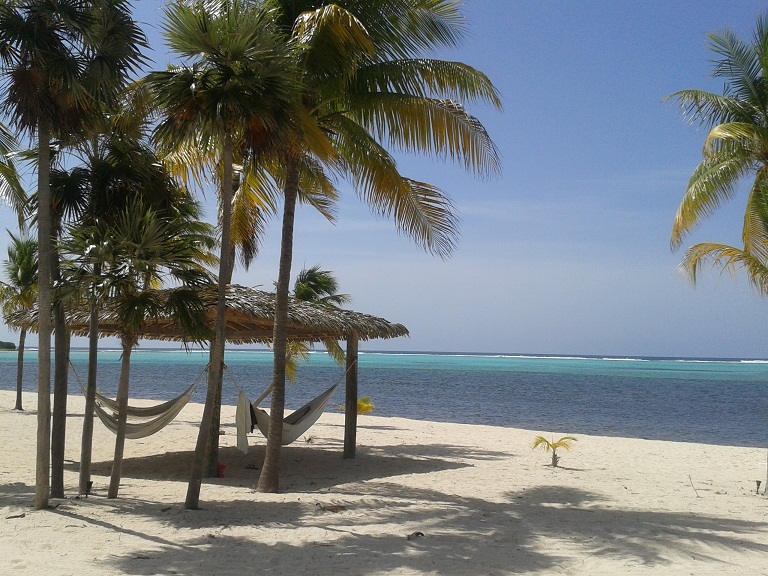 However we had saved the best until last – diving on the Bloody Bay Wall, one of the top dive sites in the world with a 6,000 feet deep coral wall. Swimming over that and watching the earth plunge away beneath me was an incredible experience and for the first time I understood the lure of diving which gets people travelling the world to explore the depths – and I realised that my taxi driver was probably right. Aren’t they always?

How to get to the Cayman Islands

I flew to the Cayman Islands with British Airways – book flights here www.ba.com

Where to stay in the Cayman Islands

Things to do in the Cayman Islands

If you love epic adventure holidays then the following trips might be your perfect holidays: How to hike the Inca Trail to Machu Picchu – and enjoy it!; My perfect Jamaica holiday; beaches, boats and beauty; Setting sail on ‘the world’s most beautiful sea voyage’ in Norway’s stunning fjords