Home / All hotel reviews / A romantic seaside stay in a beach suite at Cary Arms and Spa hotel, Devon

I’ve been lucky to stay in some of the best hotel rooms in the country but for sheer romance it’s hard to beat a Beach Suite at the delightful Cary Arms and Spa on Babbacombe Bay, Devon – in the heart of the ‘English Riviera’.

With a private terrace suspended over the beach, the views across the sweeping bay are your very own to enjoy, as is a lounge with flickering virtual fire and cosy sofa, an immaculate bathroom and a very smart bedroom, all decked out in a classic New England-style. 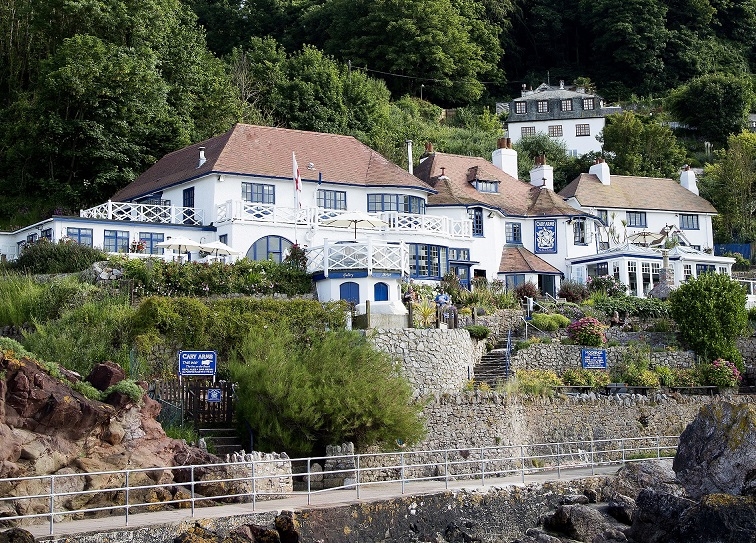 There are lovely touches, such as a coffee table handmade from stones and driftwood from the east coast of Scotland, a decanter of Plymouth sloe gin to tuck into, a bite-sized portion of seaside rock on your pillow instead of the usual chocolate and thick rugs for you to wrap yourself up in on the loungers outside for when the weather isn’t quite as clement as you’d hoped. 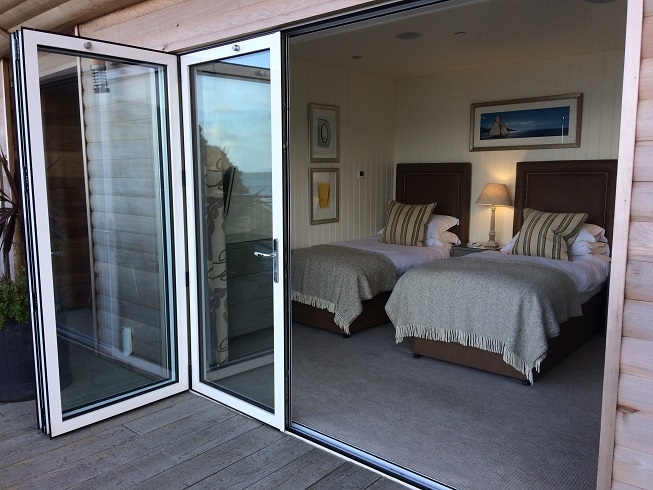 Some seaside hotels have great views but are far from the beach itself: the Cary Arms is right on the beach and has views to match from every room. The Beach Suites allow you to really embed yourself in the landscape, as both the lounge and bedroom have glass walls which fold back so you can roll out of bed onto the decking and simply spend the day soaking up the sun (or, if the weather is being very ‘British’ then enjoying the sight of the waves crashing onto Babbacombe beach). 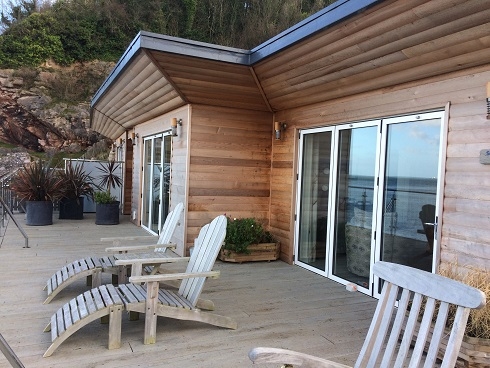 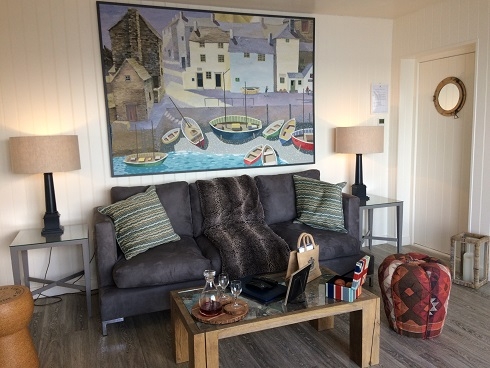 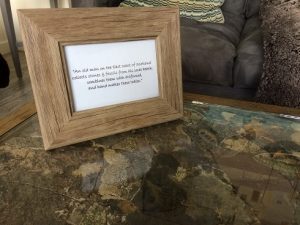 There’s fast wifi, a fridge stocked with fresh milk and wine and the bathroom has all the fluffy towels and toiletries you could wish for (and a super-strong hairdryer). It’s the kind of place in which I’d love to live for a few months in glorious isolation, writing a novel while gazing at the waves, or enjoying a lengthy honeymoon with no-one to distract you except from the seagulls (seals – especially local favourite Sammy the seal – and even dolphins have also been spotted in the bay).

Cary Arms can also be accessed directly from the beach and there are several mooring points for overnight stays in case the hotel is full (a likely prospect in the summer months). 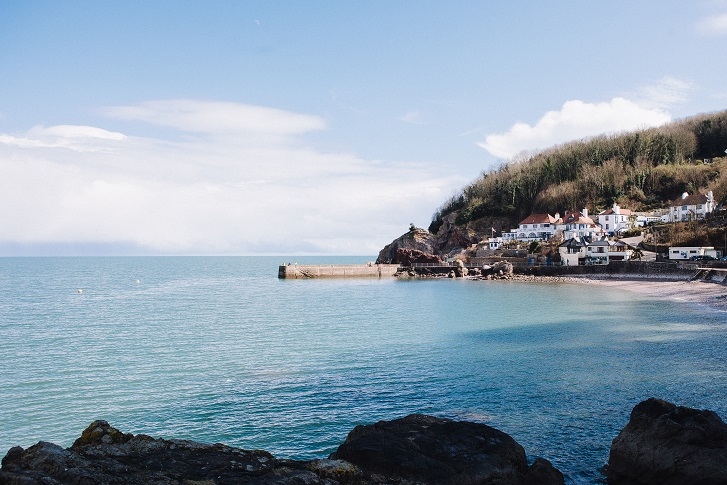 As well as the two Beach Suites, there are six equally-romantic Beach Huts which are decorated in the same coastal/New England style and where the bedrooms are set on a mezzanine level overlooking the  central lounge; again there are private patios for sun-bathing and they are immaculately and stylishly decorated. 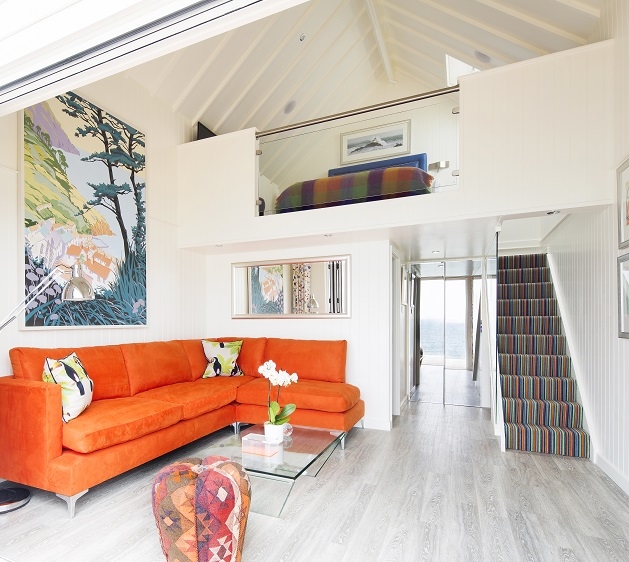 Away from the Beach Suites or Huts, if it’s sustenance or more company you want, then the Cary Arms itself is just a few seconds walk along a private path and through the pub’s pretty hillside beer garden. Inside there is a bar/restaurant and a residents lounge packed with games (both making the most of the epic views from Cary Arms) and right on the roof of the building is the spa – which is compact but feels more spacious thanks to wrap-around windows onto the view – and has a hydrotherapy pool, steam room, gym, sauna, treatment rooms and sun deck. 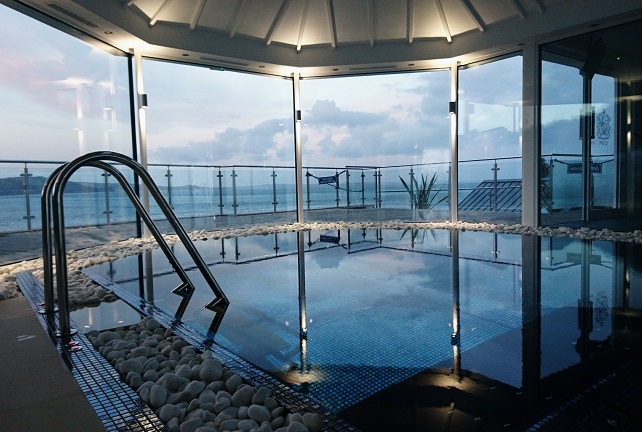 The spa is at the top of Cary Arms and has a hydrotherapy pool, treatment rooms, gym, steam room and sauna

There are also 10 rooms and suites in the hotel building itself, some with private balconies, and a couple are dog-friendly, as as the three rental cottages nearby which have three, four and five bedrooms and of course, a private terrace each. 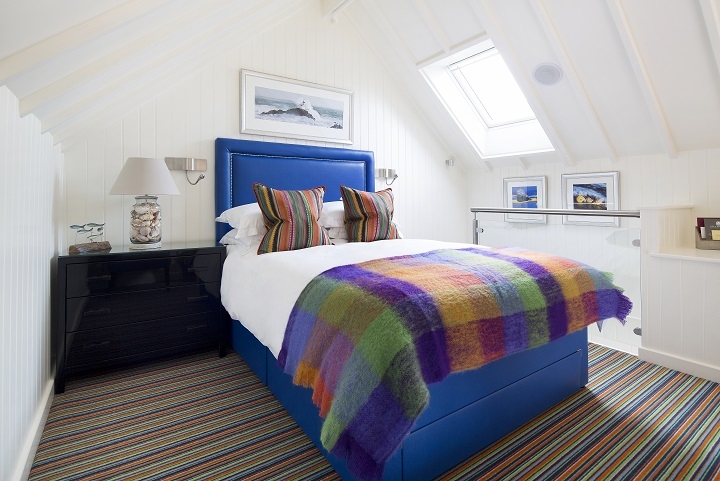 There are also bedrooms in the main building at Cary Arms

While the spa is sparkling and modern, the pub and restaurant area has kept its traditional, coastal inn atmosphere with stone walls, wooden benches and well-kept local beers. In short, Cary Arms is the type of place which, the moment you arrive there, you never want to leave. (That might also have something to do with the hair-raisingly steep road that winds down the cliff to the Cary Arms which isn’t for the faint-hearted – once you’ve made it down to the hotel staff will valet park your car back at the top  for your stay and will advise on ways not to burn your clutch out driving back up the hill if you want to visit Torquay). 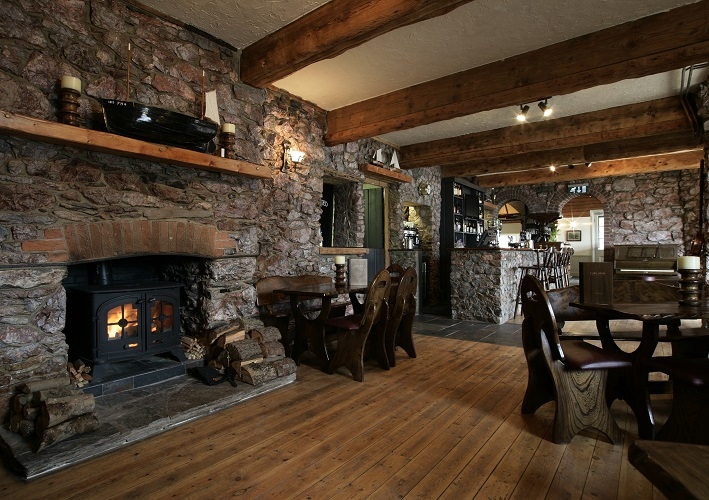 The bar at Cary Arms is cosy and traditional

Cliff road or not, I imagine most people stay put in the Cary Arms for the duration of their stay, as it is the perfect place in which to relax. Babbacombe beach with its rockpools and bracing sea air is no more than a dozen steps away (fishing rods are available for guests and if you catch a something, the kitchen is happy to cook it) and you can amble along the beach path to the cafe on Oddicombe Beach at the other end of the bay, or be rather more adventurous and tackle longer walks into Torbay, Torquay or in the other direction to Teignmouth. 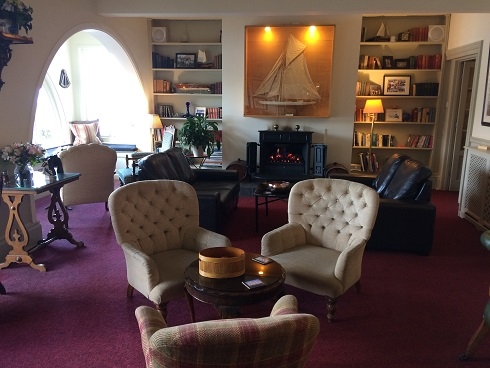 The residents lounge at Cary Arms – there’s games, books, a pool table and everything for when the weather turns

When we arrived, just after 2pm on a sunny Thursday afternoon, we decided to save our walk for the following morning and once we’d been checked in by a several friendly and efficient staff (and been offered a glass of sloe gin which we were delighted to accept) we took up residence in the bar and enjoyed a late lunch while soaking up the view and watching local fisherman fish for mackerel off the pier below. 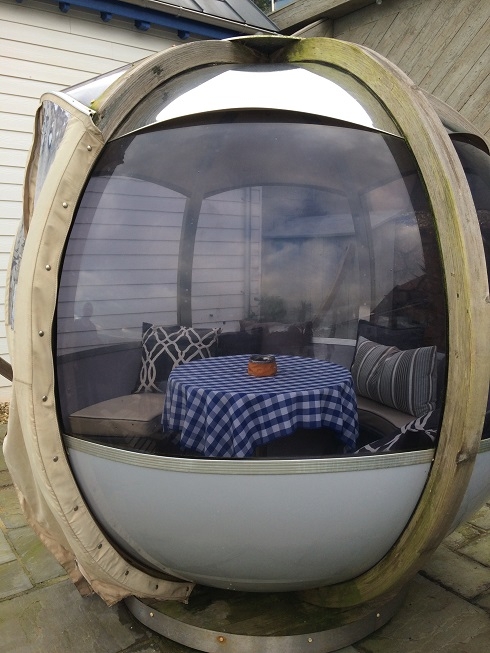 There’s an outdoor pod where you can dine or even get married in (yes, it’s licensed for weddings!)

The food is very good at the Cary Arms with locally-sourced food (lots of fresh fish and seafood as you’d expect, but also a wide-range of meat, sandwiches and salads) and the menus on the blackboard change frequently. As we tucked into our plates of mussels and crab sandwiches a rainbow appeared over the bay – perfect timing! 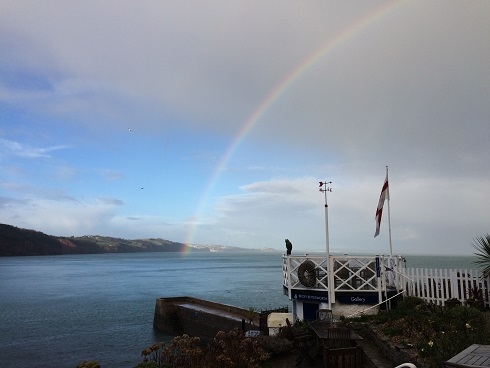 The welcoming rainbow over Cary Arms

The menus change daily at the Cary Arms

Dinner at the Cary Arms

After lunch it was time for some very indulgent spa time and a massage treatment each before floating back down to our little haven for a pre-dinner snooze. Dinner was as good as lunch had been, with excellent Devon crab and crayfish cocktail and Brixham scallops, followed by monkfish tail and chorizo risotto and pan-fried fillet of seabass (and a delicious rice-pudding to share afterwards). We even splashed out on a couple of Old Fashioned cocktails and lingered until late, enjoying imagining we were marooned on our own little island. 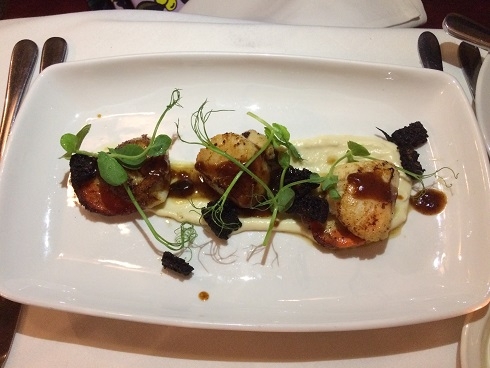 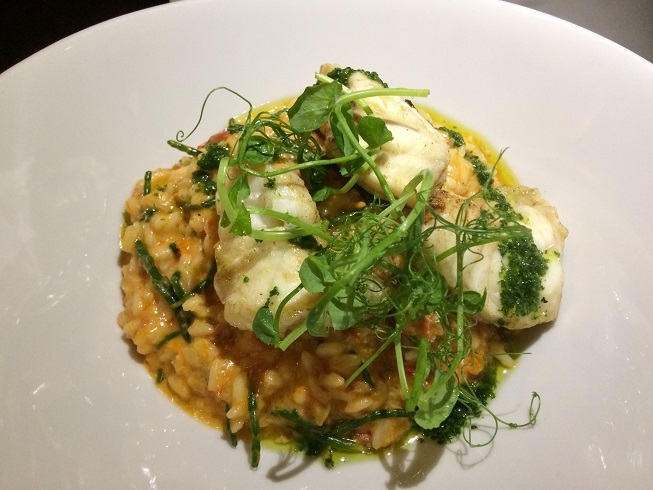 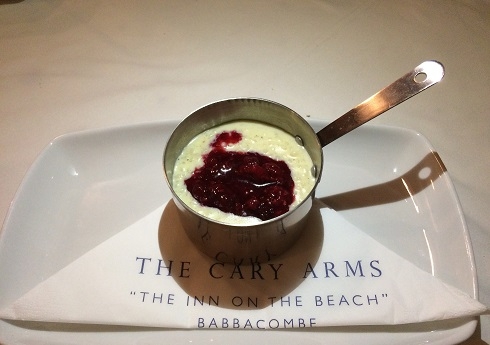 We couldn’t resist the rice pudding…

Breakfast and morning walk at the Cary Arms

In spite of the late night we were both up to watch the sunrise the next morning from our terrace and it after a hearty breakfast and a long walk along the beach it was a wrench to leave. It will be interesting to come back and experience Cary Arms in the height of busy summertime rather than during a cold January when we almost had the hotel and spa to ourselves but either way, as a romantic night away it will be hard to beat.

The view of the sea from our Beach Suite terrace

Hotel information and to book Cary Arms and spa

Cary Arms and spa is owned by hotelier Peter de Savary and his family. Other UK properties owned by the de Savary family include The Eastbury hotel in Sherborne and the Merry Harriers pub with rooms in Surrey.