You don’t often hear the cast of a West End musical warming up when going for a walk in the grounds of a country house, but that’s what you’re likely to get during a stay at Kilworth House hotel.

The unique outdoor theatre in the grounds of Kilworth House, a Leicestershire Grade 2-listed luxury hotel means that not only can you enjoy all the delights of a night or two in a country house hotel – fine-dining, stylish rooms, great hospitality and country walks – but just a few minute’s walk through a wooded glade (or a buggy ride) takes you to the Kilworth House theatre, a 550-seat auditorium which hosts productions throughout the summer months. 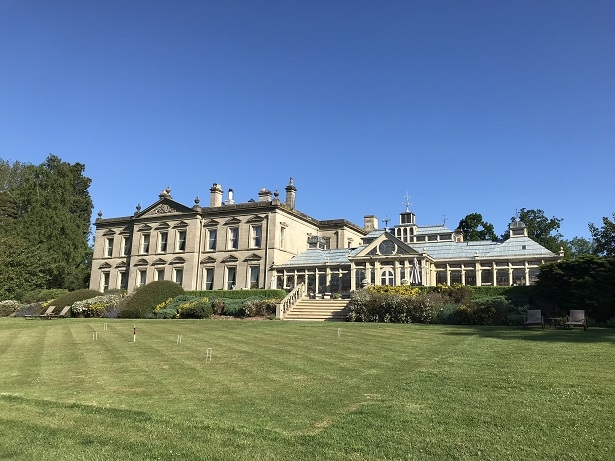 A stay at Kilworth House

World-famous musicals Cats and Joseph and the Technicolour Dreamcoat, Last Night of the Proms and tribute concerts to George Michael, the Bee Gees, Rod Stewart and Neil Diamond have all been productions at Kilworth House theatre and Kilworth House hotel does a range of great value theatre packages including a pre-theatre dinner or dinner, bed and breakfast.

Guests who stay at Kilworth House are more likely to dine at the the hotel, but theatre-goers who would rather bring their own food are able to bring their own picnics to enjoy in the grounds, and there’s also a bar for pre- and interval drinks. 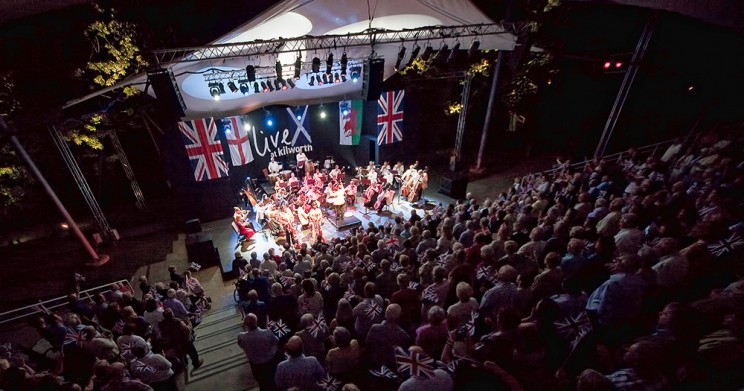 I had plenty of time to immerse myself in the charm of Kilworth House before the evening’s performance, having arrived unexpectedly early due to its handy location – the hotel is just five minutes from Junction 20 of the M1 (just the other side of the motorway is the village of Lutterworth, where Frank Whittle invented the jet engine). A winding driveway leads through Kilworth House’s 38 acres straight up to the front door where friendly reception staff were able to check me in, in spite of the early hour. 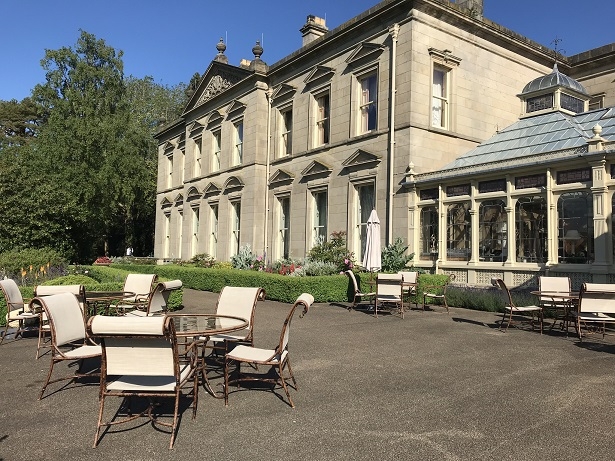 The history of Kilworth House

The hotel, built as a family home at the end of the 19th century, was home to just two families in 120 years before being restored and turned into a hotel in 2003, and the atmosphere is still very much a classic country home, with high ceilings, antique furnishings and stylish carpets.  Lunch and afternoon tea were being served – Kilworth House afternoon tea is extremely popular – so I I enjoyed an excellent salad Nicoise before heading up to my room. 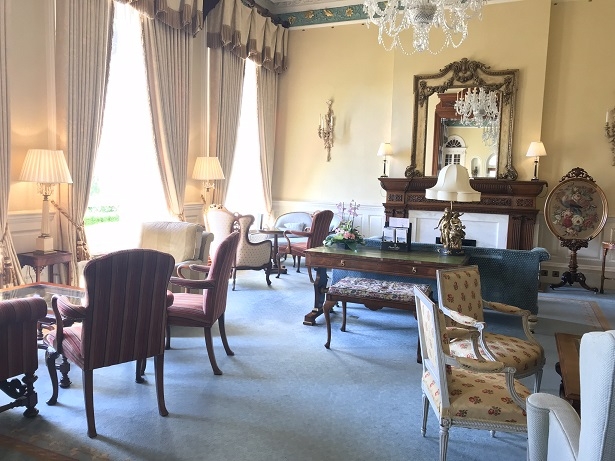 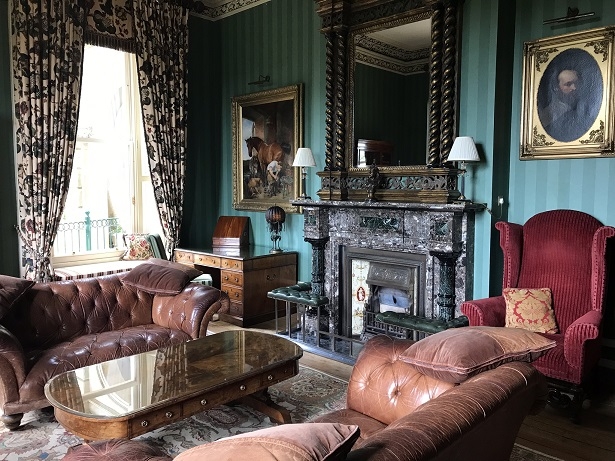 This lounge, just by the entrance, is a lovely, classic country house room

There are two levels of room at Kilworth House – garden rooms and luxury rooms – and while I was in a garden room it felt extremely luxurious to me. There was a vast bed, tea and coffee-making facilities (you could order up fresh milk to your room), complimentary water, magazines, fruit and an immaculate bathroom. The hotel also has a small gym but I preferred to explore outside, from the ha-ha at the rear of the hotel to the lake  at the front. 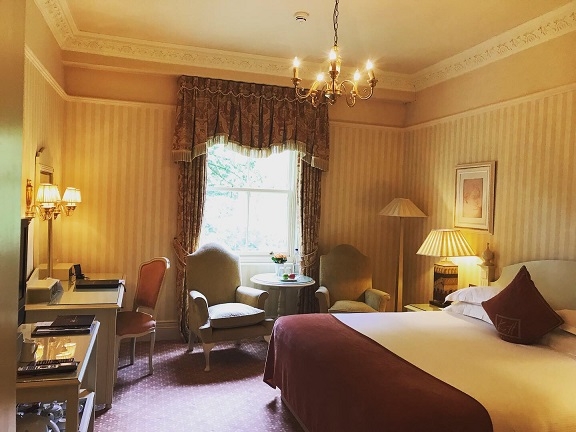 My bedroom was smart, immaculate and contained everything I needed during my stay at Kilworth House hotel 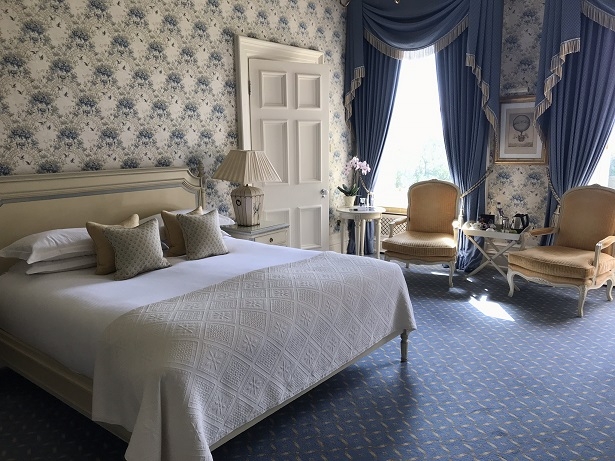 The neighbouring bedroom to mine at Kilworth House hotel

A lovely aspect of a stay at Kilworth House is the air of luxury which runs throughout the hotel, so everything from the corridors to the loos was immaculately decorated and maintained. The original building has been extended several times but you can’t see the join as the style is seamless throughout, and instead the hotel is far bigger than it initially appears. 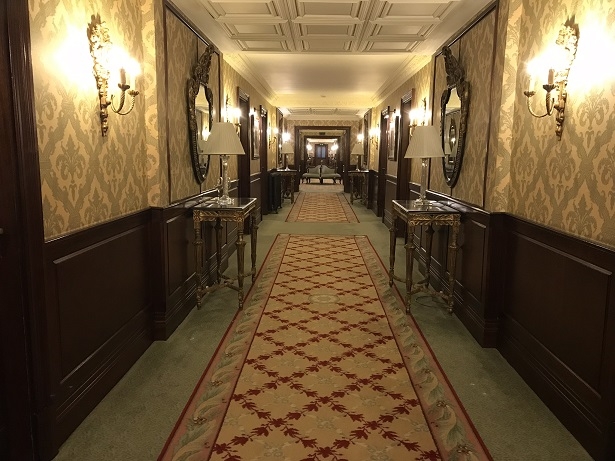 The upstairs corridor leading to the bedrooms 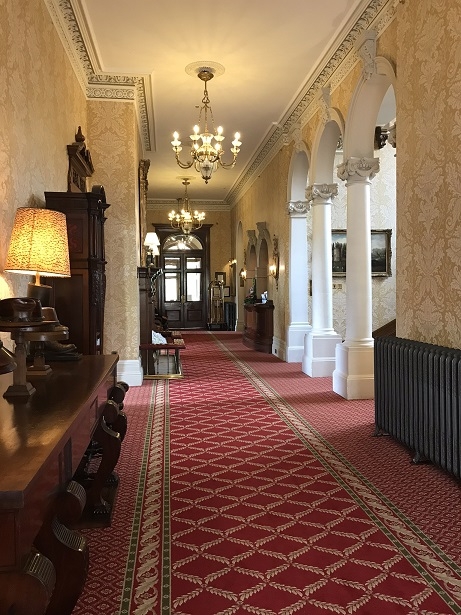 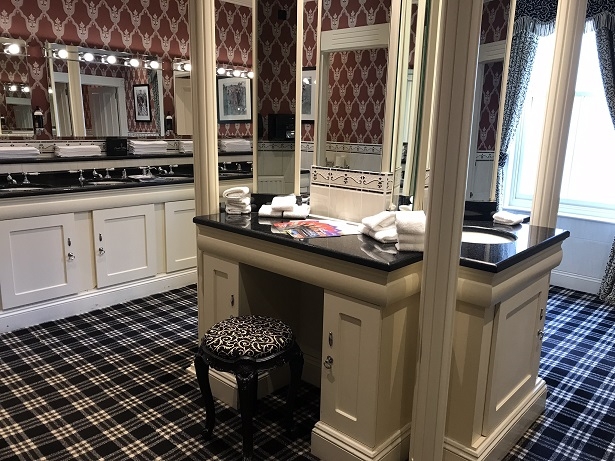 The downstairs ladies – seemed too smart not to include a picture!

Pre-theatre dinner in the Orangery restaurant

Dinner was early due to the evening performance, so at 5.30pm we were ushered into the beautiful Orangery restaurant, which still has part of its original tiled floor and which offers great views of the grounds. 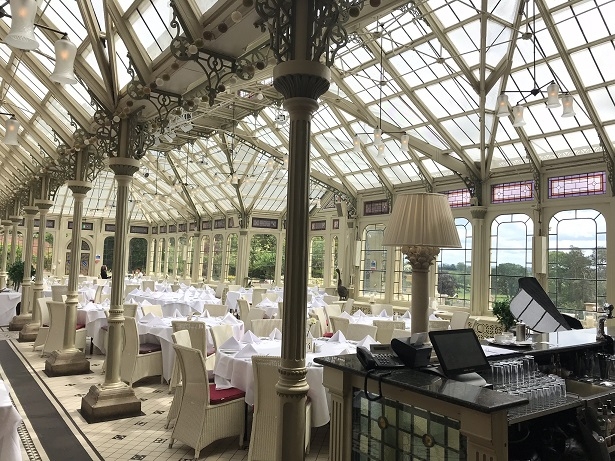 The menu was charmingly styled in ‘Joseph and the Technicolour Dreamcoat’ colours and offered a simple but good range of dishes. We started with the fish cake with curry emulsion and prosciutto and melon, before breast of chicken with fondant potato and fillet of sea bass: all dishes were excellent, served quickly and piping hot by friendly and efficient serving staff, and we didn’t feel over-full even when enjoying fruit pavlova and strawberry frangipani tart. 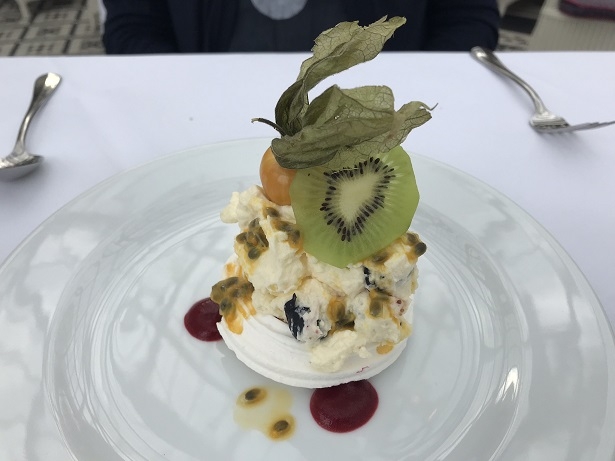 Curtain up at Kilworth House theatre

Having sat down at 5.30pm we could take our time over dinner and it was past 7pm when we ambled down through a lantern-lit path to the theatre to take our seats. We’d been kindly provided with red blankets for warmth although the theatre is very sheltered and I really enjoyed watching Joseph again, a musical I hadn’t seen since I was at school. 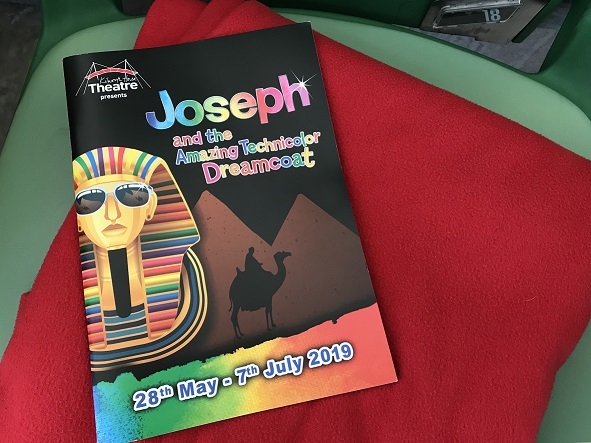 Our programme and warm red blanket

The audience loved it as well, rising to their feet at the end of the exuberant performance (the boy playing the young Joseph was especially good, as was the narrator played by Carole Stennett). It was a balmy summer’s evening when we were there but if the rain comes down then the show will still go on – both stage and audience are under sturdy canopies.

A slick parking operation meant the departing audience were soon on their way afterwards without any queues and overnight guests simply jumped in a buggy or walked back up to the house for a nightcap. Guest who aren’t watching a show can dine at normal time in the Orangery or in the hotel’s more formal Wordsworth restaurant. 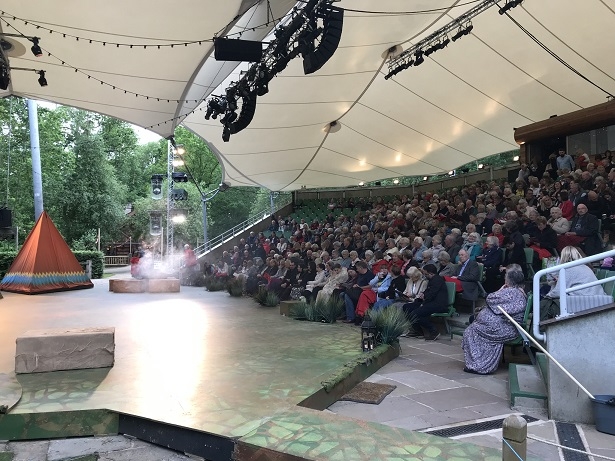 The audience awaits curtain up… (well, the start of the show). The blur in the foreground was actually a smoking fire effect 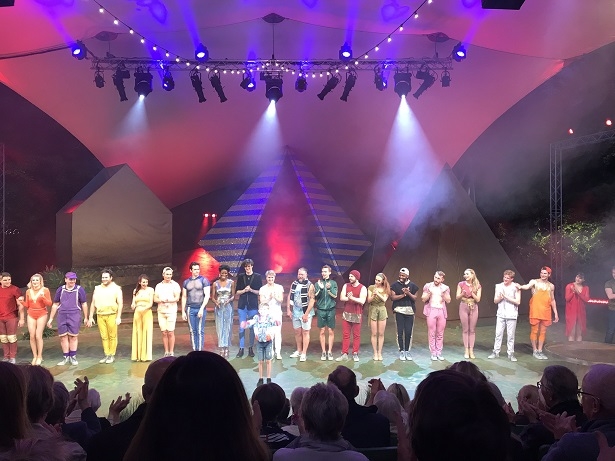 Young Joseph (front) receives the applause from the appreciative audience

After a good night’s sleep (although to be honest, the bedroom walls did seem rather thin, or maybe my neighbours were rather hard-of-hearing, as I could hear their TVs on both sides, but thankfully I always have earplugs) the sun enticed me outside for a walk before breakfast in the Orangery where the sunshine was so bright I was glad I still had my sunglasses with me. 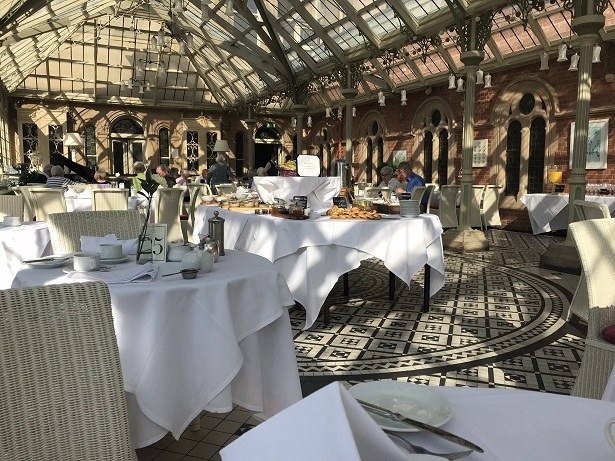 The bright sunshine flooding the Orangery in the morning

Breakfast (£13.50 if not included in room price) was excellent value, with a large buffet selection and superbly cooked to order hot dishes, including smoked kippers, Eggs Benedict and Scottish Smoked Salmon toasted bagel. A full English for me with the daily paper was, as always, my preferred way to start any day and the excellent coffee kept on coming. 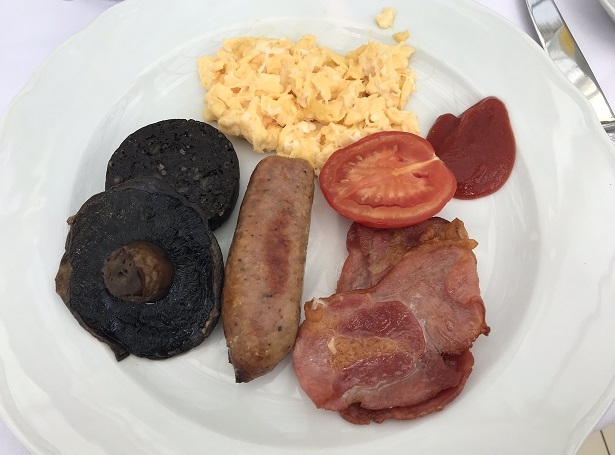 There was just was time to have a tour of the hotel with Elizabeth Payne, the charming and long-serving hotel manager who has done such a great job at Kilworth House. We had a good nosy around the luxury rooms, many of which had elevated bathrooms and free-standing baths, plus the addition of port and home-made fudge, as well as the Wordsworth restaurant, Library Bar and underground Cellar Bar. 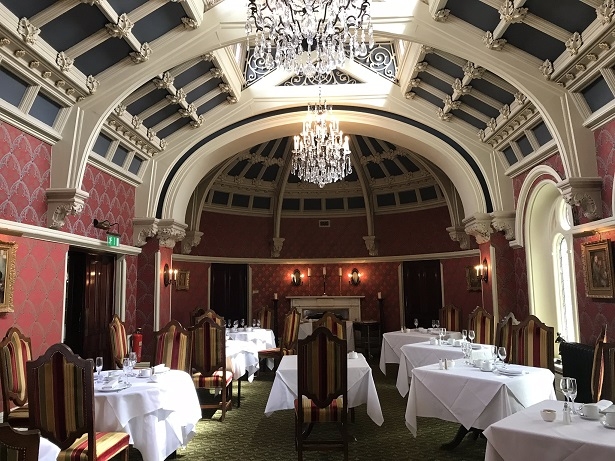 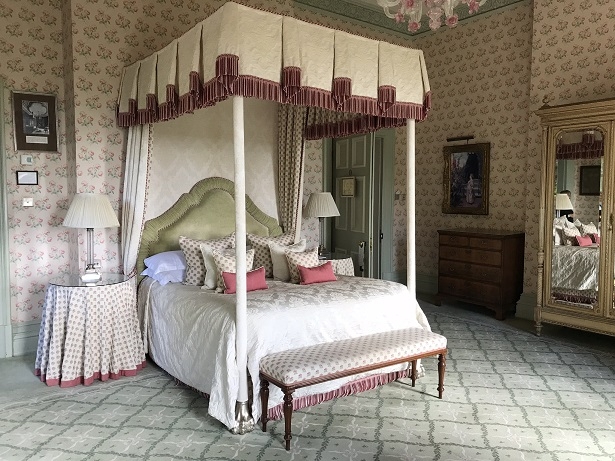 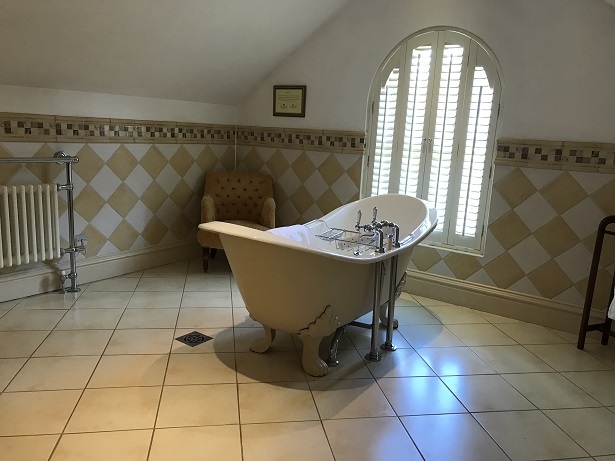 … while some have free-standing baths, this one in splendid isolation on a level of its own!

I finally reluctantly departed Kilworth House but I certainly hope to be back before long. 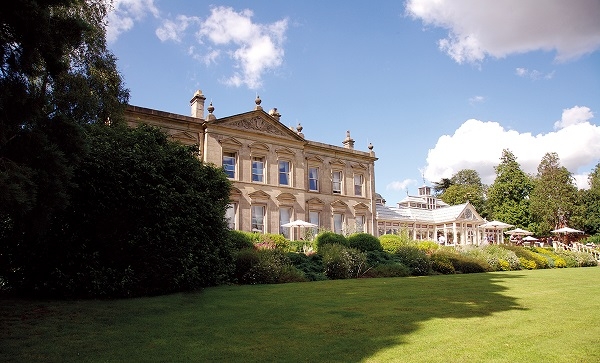 The view of Kilworth House from the back of the hotel 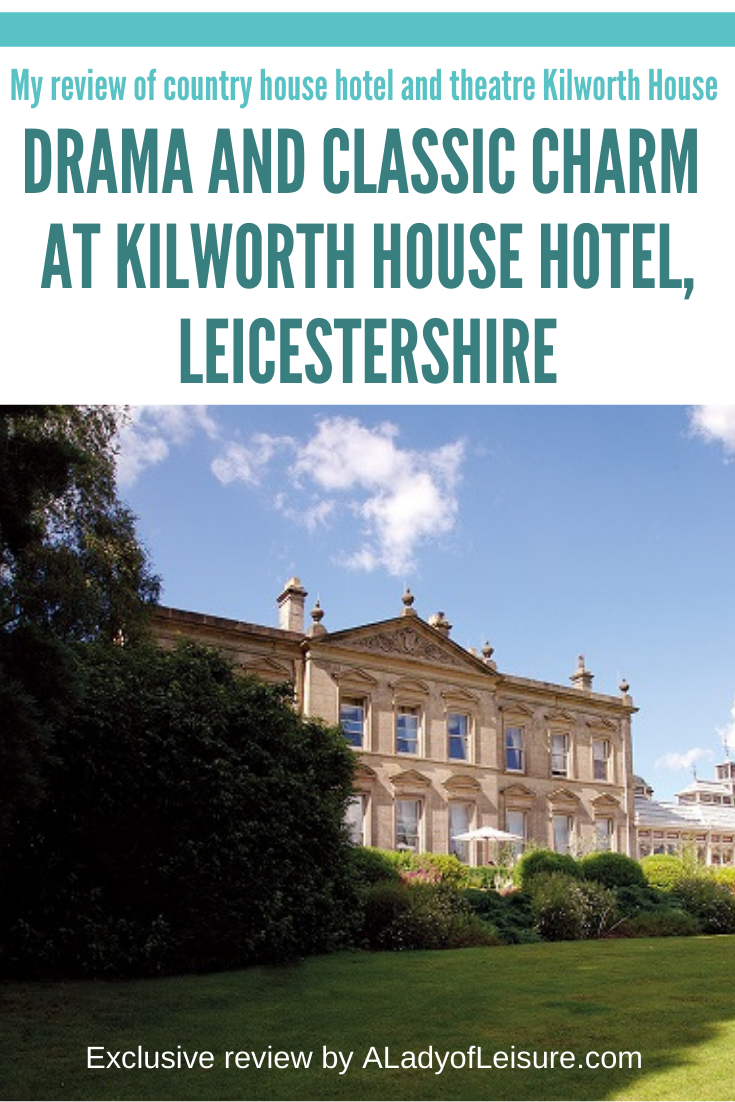 My stay was provided by Kilworth House, a member of the Pride of Britain Hotels collection of 50 luxury hotels across the UK. If you like this review then check out other Pride of Britain Hotels reviewed by ALadyofLeisure.com including: Medieval magic with a modern twist at The Swan hotel, Lavenham; Make yourself at home at the grand but friendly Lewtrenchard Manor, Devon; Talbooth House: an almost-perfect stay at a lovely luxury hotel in Essex

If you love hotels with added entertainment then check out my reviews of these great hotels with private cinemas: