Vauxhall in London is known for many things – the Oval cricket ground, a permanently traffic-snarled gyratory system, a disused gas works – but a pleasant afternoon drinking gin and tonics is not usually the first thing that springs to mind.

However last Tuesday I did just that, having just been on the Beefeater Gin Distillery tour. 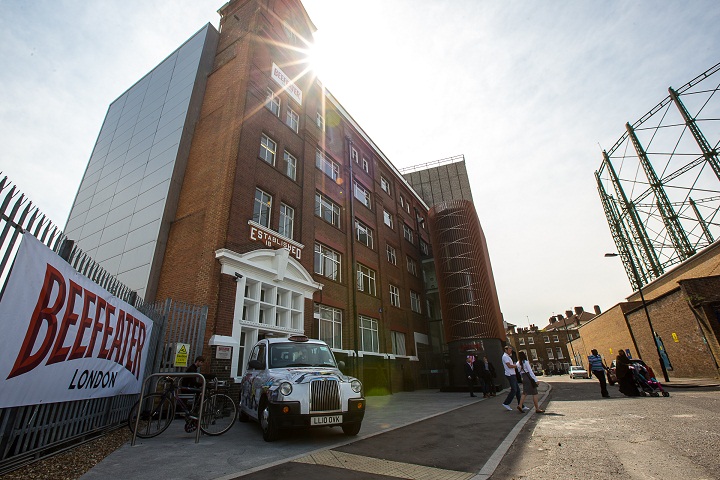 The Beefeater distillery in London’s Vauxhall, where gin has been produced since 1958

Beefeater gin– which lays claim to being the world’s biggest-selling premium gin (Gordon’s being just ‘standard’ gin, apparently – unsurprisingly Diageo disagrees) – has been made in Vauxhall since 1958 and has been a London-based spirit throughout its history.

It was in 1863 when pharmacist James Burrough bought a small distillery in Chelsea for £400 and after a decade of experimenting with different spirits and punches, and started making Beefeater gin, named after the Yeoman Warders of the Tower of London (who each get a bottle of Beefeater gin a year).

After moving south of the river, first to Lambeth and then its current home at Mountford Place just off Kennington Lane, Beefeater started cranking up production, and now sells 20.7 million litres a year, exporting to more than 100 countries, particularly the US and Spain. 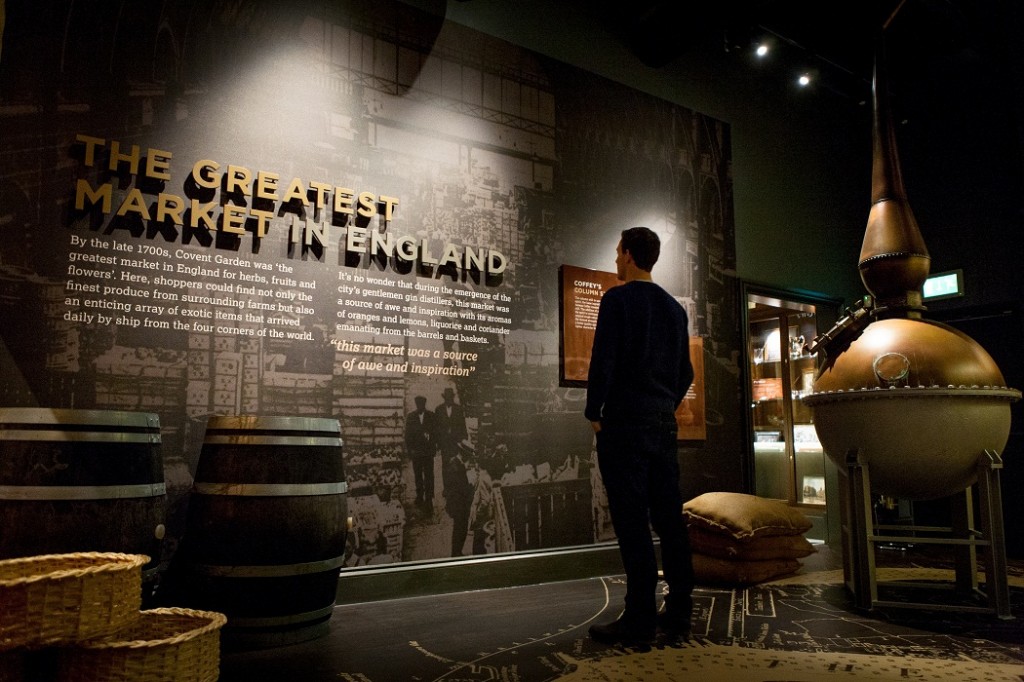 Possibly inspired – or provoked – by the recent growth in the number of distilleries in the capital, such as Sipsmith in Hammersmith, Sacred Spirits Company in Highgate and the City of London Distillery just behind Fleet Street, Beefeater’s owner Pernod Ricard finally decided to open its doors to the drinking public.

The tour itself – £25 for adults on the standard 90 minutes tour, £45 for the 2.5 hours VIP tour – is a self-guided amble though the history of gin in general and the birth of Beefeater in particular. With sounds of ‘olde London’, cobbled streets and various interactive displays, plus pictures of Hogarth’s Gin Lane, a mock-up of an American bar, lots of cocktail recipes and gin paraphernalia, it is an extremely enjoyable and informative half hour or so for anyone interested in gin. (There is the option of having an iPad too, which springs to life with even more information at certain points along the tour, which some people might prefer.) 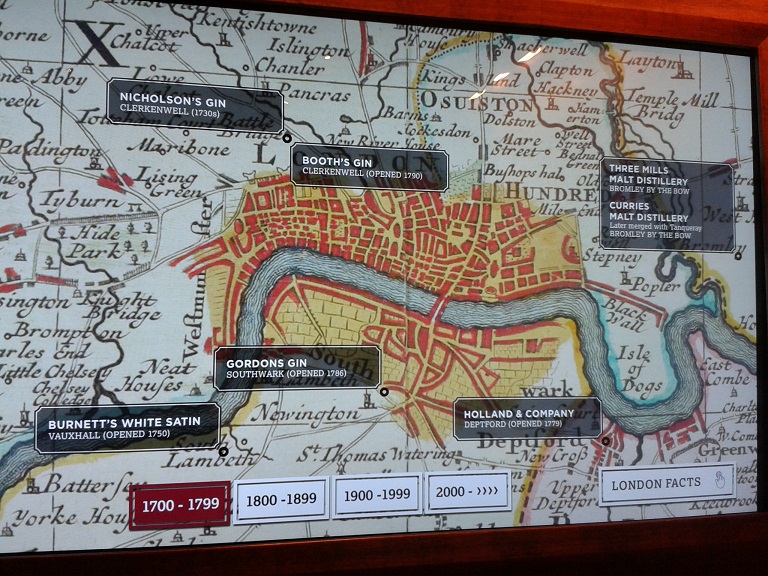 A map showing the rise (and fall, and rise) of the number of distilleries in London 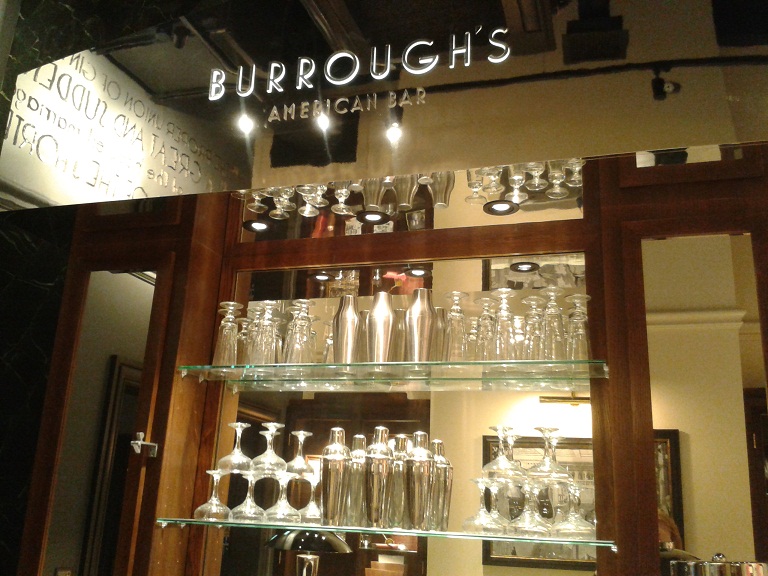 On the distillery tour

There were really interesting nuggets to be found among the exhibits – such as the Captain who secretly dispensed gin in 18th century London through a door knocker in the shape of a cat’s head – and a walkway connecting the exhibition to the actual distillery was full of interesting Beefeater memorabilia such as old bottles and advertising posters. 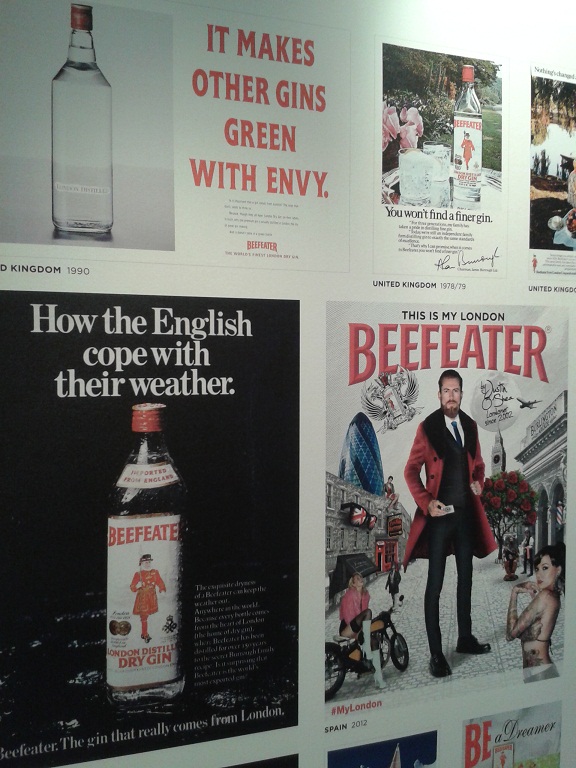 Beefeater past and present – from advertising posters… 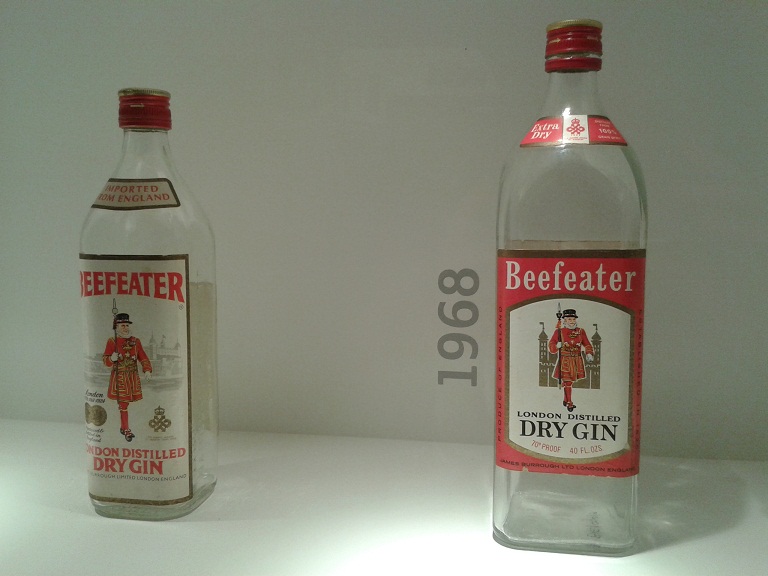 …to new and old-style bottles

The second half of the tour takes in the nine botanicals used to flavour Beefeater (the neutral spirit is actually produced by a third party in Scotland, which is shipped down to the distillery, and then shipped up again to be cut with Scottish water to get to the required strength) and it’s rather enjoyable squeezing and smelling the juniper berries, Seville orange peel, lemon peel, orris root, angelica root, angelica seeds, coriander seeds, almonds and liquorice which are steeped for 24 hours before being re-distilled. 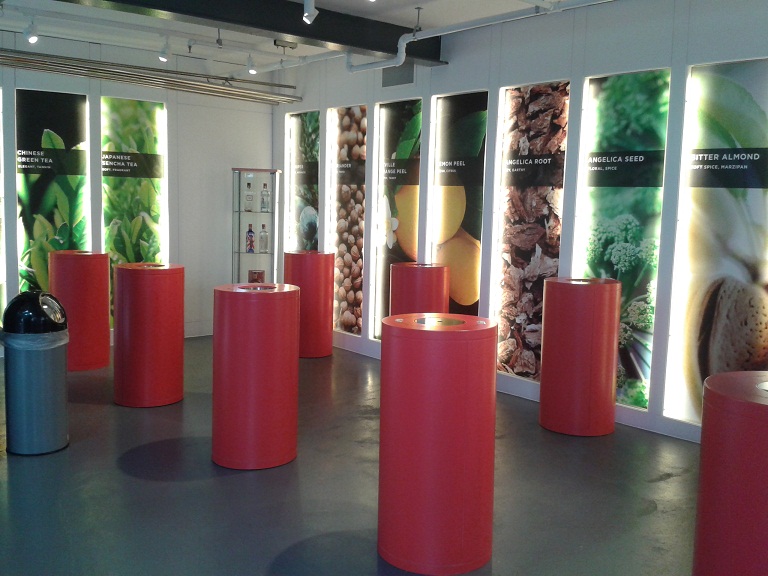 The tour usually ends here with a view through the reinforced glass ceiling of the impressive pot stills overhead before having a complimentary G&T at the bar, but thankfully for I’m with Desmond Payne, Beefeater’s master distiller with over 45 years in the industry. Desmond is a gin fanatic in the nicest way and can talk for hours about the intricacies of the drink he loves. We pop through the doors to the the calm, cathedral-like atmosphere of the distilling hall where the vast pot stills tower above us. 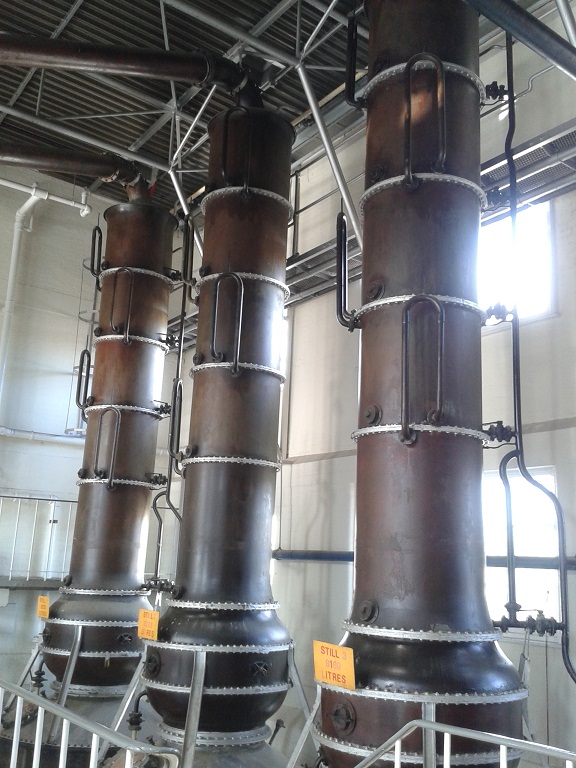 The pot stills at the Beeteater distillery tower overhead 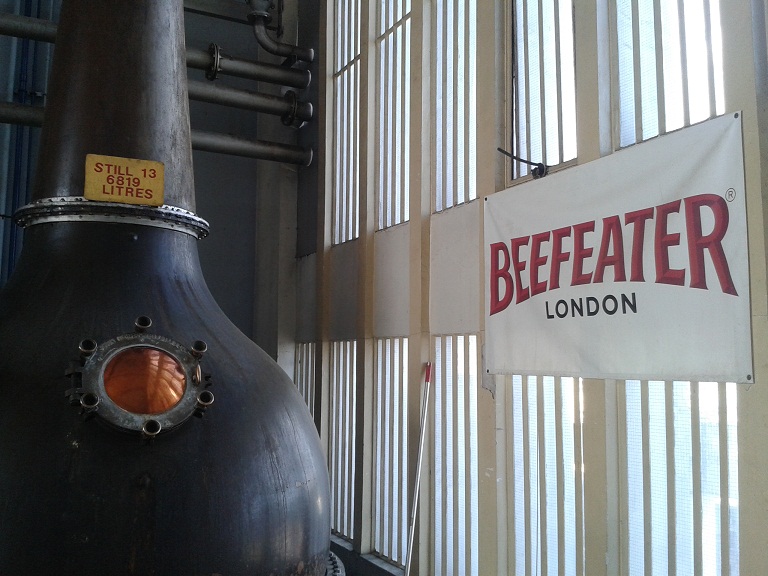 One of the stills in which Beefeater gin is still made

Rather to my surprise for such a global brand, it is still very much a hands-on operation. Just a few people work at the distillery and the botanicals are just in bags resting on the floor. Even the scales are the old-fashioned manual variety and makes me feel as if I’ve jumped back a century or two.

We repair to the bar for our G&T and compare views on the best cocktail bars in town – I extol the virtues of the bar at the Marriot County Hall (the barman there does a fabulous Negroni made from Sacred’s gin, English vermouth and Rosehip Cup) while Desmond recommends the Connaught bar in Mayfair, Artesian bar at the Langham hotel and Happiness Forgets in London’s ultra-trendy Hoxton Square. I reel off happily back into the traffic maelstrom towards Vauxhall. 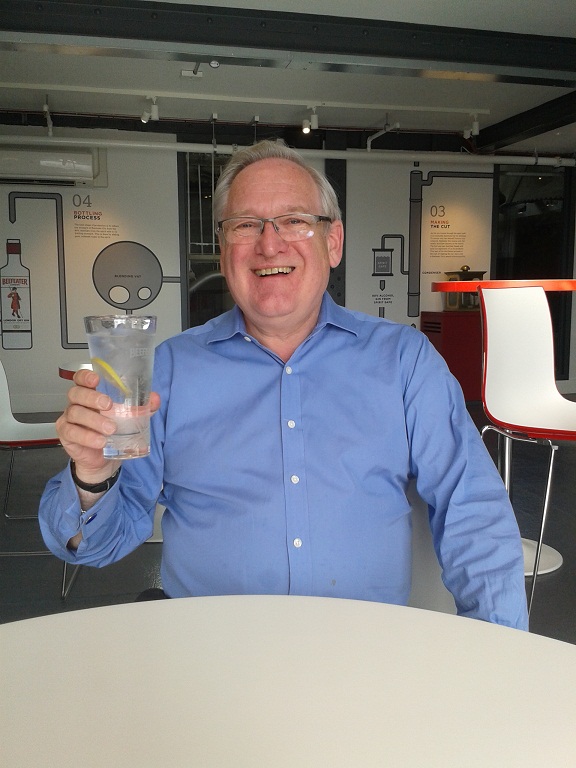 Getting to the Beefeater Gin Distillery tour and booking a tour

Book tickets for the Beefeater tour

The distillery is a short walk from Oval underground station (Northern Line) or a slightly longer one from Vauxhall (Victoria line).

If you like discovering great food and drink then check out these great experiences: Curries, bagels and fish and chips on a memorable London food tour; 14 wines at dinner and a spa hotel at The Vineyard, Newbury; Noble Rot on Lamb’s Conduit Street, a great addition to the area;