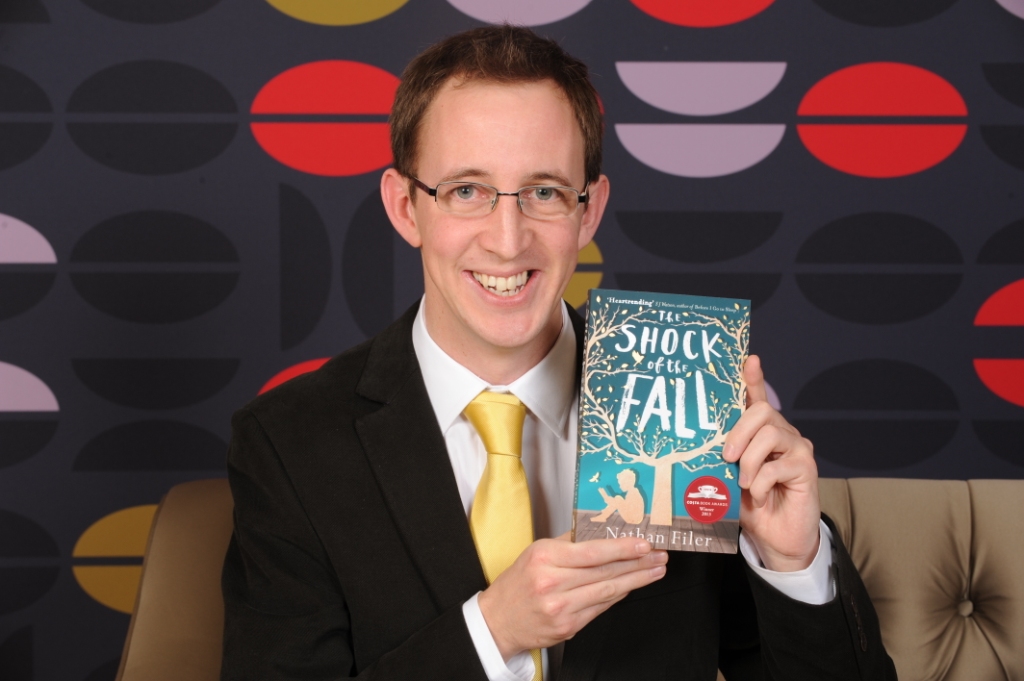 First time novelist Nathan Filer with his Costa award-winning book, The Shock of the Fall

My taxi driver was very excited when I said there would be loads of celebrities at the Costa Book Awards 2014.

‘Like who?’ he asked, as he turned off Piccadilly to head towards the event venue, Quaglino’s restaurant.

‘Like, erm, Ian Hislop, and Simon Mayo… and maybe Mariella Frostup?’ I tried to think of some more A-list names who might conceivably be there but I should see his shoulders drop. He was obviously not that impressed.

Of course, it turned out I had slightly undersold the whole thing. The first person I spotted on walking down the stairs to the event was Jerry Hall, looking stunning in a massive halo of blonde hair.  Just nearby was actress Natascha McElhone, and Texas singer Sharleen Spiteri, the gorgeous Neil Pearson, and looming over all of them was the tall, brainy one from Pointless (Richard Osman – he is really rather tall). 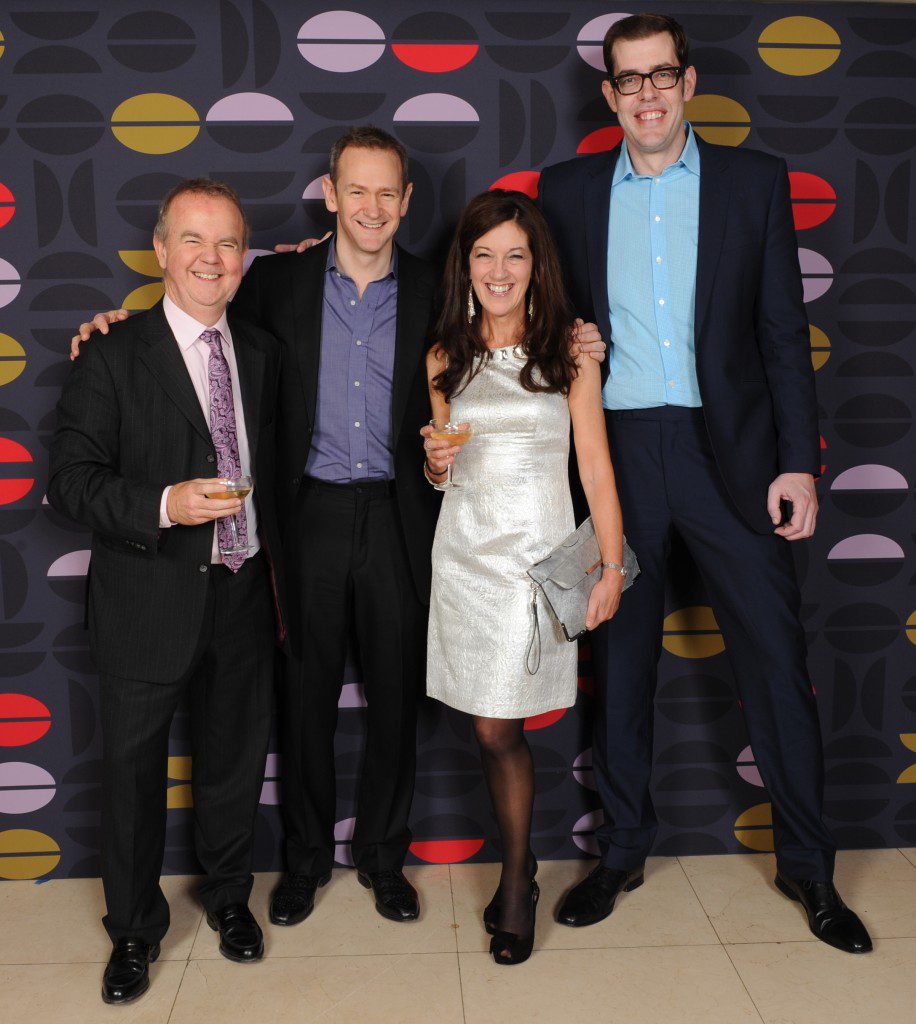 Ian Hislop was indeed there and looking very smart, unlike Simon Mayo who in a baggy jumper and tatty jeans looked as if he’d just been doing a spot of gardening, Alistair Stewart and Tom Bradby shared a special ‘hello fellow broadcaster’ wave and Esther Rantzen, Andrew Neil and Helen Lederer mingled cheerfully in the crush.

For years, the Whitbread book awards, as they used to be known, were handed out over a lavish sit-down dinner at the brewery on Chiswell street, attended by notables such as Hugh Grant. I spent one evening watching Tracy Beaker author Jacqueline Wilson trying to eat her dinner while being asked for her autograph every few seconds.

However the event, when renamed the Costa Book Awards eight years ago, was pared down to just two hours of champagne and canapes, with half an hour hour of speeches and prizes which works just as well and presumably saves Costa parent company Whitbread a fortune.

As part of the streamlining, the individual award winners are announced in advance, so we all knew that Life after Life by previous winner Kate Atkinson had won the novel award, Nathan Filer had won the first novel award with The Shock of the Fall; The Pike: Gabriele d’Annunzio, poet, seducer and preacher of war had won the biography award for Lucy Hughes-Hallett and the poetry award had been won by Michael Symmons.

During the presentations by broadcaster Penny Smith, sporting a sparkly mini-dress and knee-high leather boots, the 350-strong crowd were treated to five minutes of video interviews with the authors. This worked especially for the children’s book award winner, Chris Riddell and his fabulous illustrations of his book Goth Girl and the Ghost of a Mouse.

But the actual announcements of the evenings were for the short story award. The shortlist, which was chosen blind by the judges from 1,400 entries, remarkably included two shortlisted authors from the previous year, Angela Readman and Shelia Llewellyn who were singled out from 1,800 entries the previous year. Tonight it was Readman’s night and she took home the £3,500 prize for The Keeper of the Jackalopes.

Then it was time for the Big One. Judge chairman Rose Tremain said that the final judging process, completed just a few hours before, had been amicable and with ‘no blood’ before handing over to Costa boss Chris Rogers who announced that the winner was… first time novelist Nathan Filer, the news greeted by strong applause and loud whoops from his friends.

An outside contender, Filer said that he hadn’t prepared a speech ‘after taking a look at the odds’ and in a heart-felt speech thanked the judges and his wife of just one week, Emily, ‘without whom I certainly wouldn’t be standing here today.’

His book, The Shock of the Fall, was praised by the judges for being ‘exceptionally moving without being sentimental’, adding: ‘To have taken such a marvellously articulated thing from his professional life and to have brought it to life in the way that he has was a fantastic achievement.’

The ‘substantial’ six-figure sum paid by Harper Collins for his debut work will hopefully lead to an illustrious writing career for the 32-year old lecturer in creative writing at Bath Spa university, who worked for many years in the mental health service in Bristol where he still lives.

The winners went off to be interviewed and have their pictures taken, while the rest of us got back into drinking champagne and tucking into the rather impressive canapes, which during the speeches had changed from fillet steak, scallops and risotto to millionaire shortbread and black forest lollipops.

I had a frankly eye-popping chat with one of the shortlisted authors about the sexual practices of forty-something online daters, while having yet another elderflower cordial and wondering when dry January would ever come to an end. Then the room was quite literally taken apart around us, as workman displaying large amounts of builder’s bum started loudly drilling and dismantling the display around the crowds still drinking and chatting about literature. The conversations were drowned out by the noise and watching builders strips the walls of the book displays. It was time to go.

If you enjoyed this you’ll like: Bond, Bridget and me: my stay at Stoke Park hotel Buckinghamshire; Medieval charm with a modern twist at The Swan Lavenham, Suffolk; A stay at luxury hotel Sopwell Manor, St Albans;