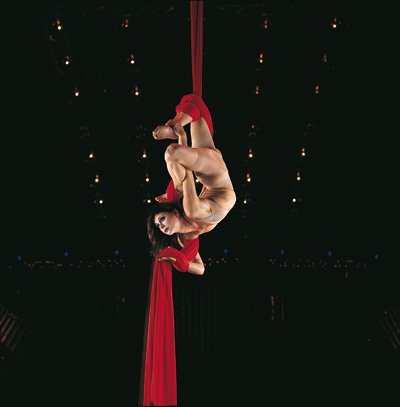 But while the London show didn’t boast a 1.5 million gallon swimming pool in which acrobats high-dived and from which grand pianos emerged – the Royal Albert Hall’s insurers might have had something to say about that – Quidam was a much more intimate experience which seamlessly combined moments of exhilarating high energy with awe-inspiring displays of quiet and focussed acrobatic strength and grace which had everyone memerised. On several occasions during the show I realised that I had forgotten to blink or swallow for what seemed like an age, and my sharp intake of breath at one stunning sequence was amplified a thousand times as the entire audience did exactly the same.

The theme running throughout was a child’s view on the world, represented by a small girl who, accompanied by her red balloon and a haunting melody, saw moments of wonder in the world around her while her parents remained oblivous on their daily commute or slumped in front of the newspaper or the TV. This being the world  of Cirque though, the parents were soon whisked off high into air, while the world below became inhabited with performing seals, nymphs, clowns, acrobats and a headless man holding an umbrella.

One woman danced on nothing but scarlet ribbons, a dozen feet into the air, while another bent into impossible shapes perched on the thinnest of poles topped with blocks no bigger than a computer mouse.

A man turned himself into a human gyroscope, while others scampered up vertical ropes and were whirled around in the sky. There were comic interludes, persuambly to allow performers to catch their breath, which didn’t work as well for me, even though a second-act routine with a film director was greeted with raptures by the audience.

But the highlight for me was an astonishing Adam and Eve sequence in which the usual drumbeat and chanting of the live music  accompaniment was stilled and two performers slowly became a single gravity-defying sculpture in which the very air in the hall was stilled, for fear that air molecules might disrupt such a perfectly balanced moment. It wasn’t Vegas, but its emotional connection with the crowd made it a far more intimate experience. 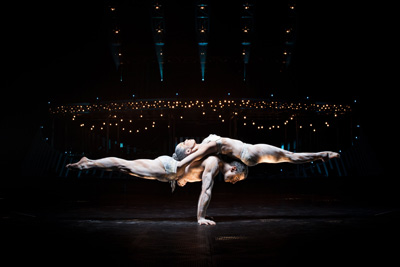