If you’re planning a stay at The Stafford hotel London then you have to ask for a tour of this luxury five-star hotel. All sorts of treasures will suddenly be revealed, from an epic wine cellar and a World War 2 exhibit to the penthouse suite, converted stables and the unique American Bar. 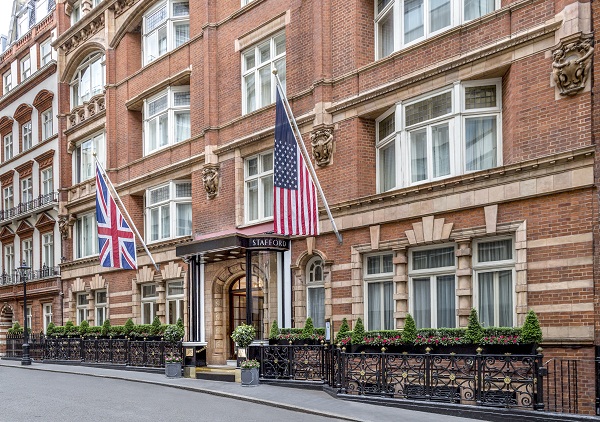 The Stafford hotel, St James’s, a grand red-brick building tucked down a quiet side street near Piccadilly

A stay at Stafford hotel, London

If I hadn’t asked for a tour of The Stafford, London  during my recent stay then I would have missed out. I’d spent a very pleasant night in the hotel, which is tucked away in a quiet corner off St James’s street in London’s Piccadilly. The entrance hall was light and airy, the restaurant looked very grand, my bedroom in the modern-looking Mews Suites block overlooking the hotel courtyard was of the high quality you’d expect from a top-end London hotel whose immediate neighbours are the equally high-end Duke’s Hotel and St James’s hotel and it was all extremely, well, nice. Nothing was jumping out at me as being particularly exciting or different but maybe that wasn’t a bad thing – maybe people don’t go to posh hotels to be surprised or excited. 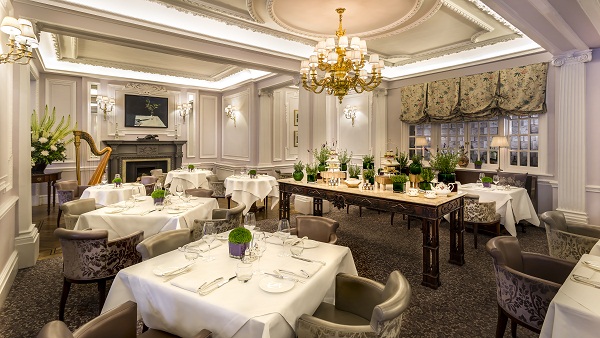 Just before I was about to check out after my stay, I asked if I could be shown around some other rooms. Only one room was available, I was told, but I was shown it anyway. It was in the main hotel building which was the former London residence of Lord and Lady Lyttleton, and it was very smart: more compact than the one I’d stayed in with high ceilings and a more traditional feel.

Then my very helpful tour guide Pierre remembered that the ‘Guvnor’s Suite’, based in the converted 18th century stables across the courtyard, might be free, so we headed over to take a look at that. This was very smart: a very plush duplex with two bathrooms, a library, kitchen and lounge with working fireplace, and the master bedroom with its minstrel’s gallery overlooking the main lounge – it really showed how different in style and size rooms at The Stafford could be. 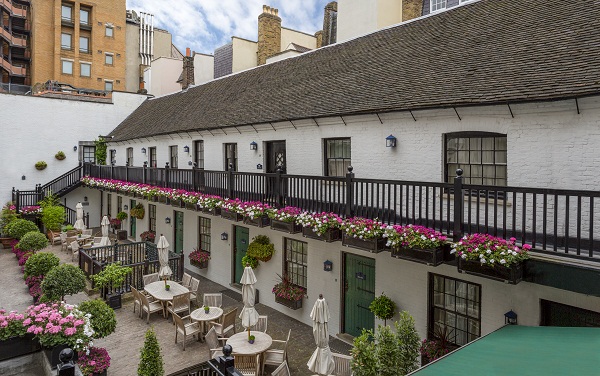 The Carriage House block of coverted 18th century stables, are a riot of colour with its hanging baskets. The door to the Guv’nor’s Suite is at the top far left hand side

We were on a roll now and the cry went up – let’s go to the penthouse! So off we went, across the beautiful mews courtyard, a riot of flowers making it bright and colourful even in the pouring rain, and up to the penthouse suite which had its own roof terrace for those who are optimistic about the British summer. 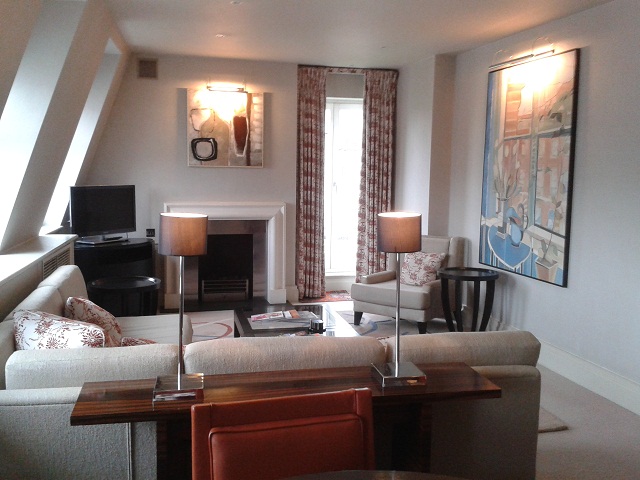 The lounge at the Penthouse Suite 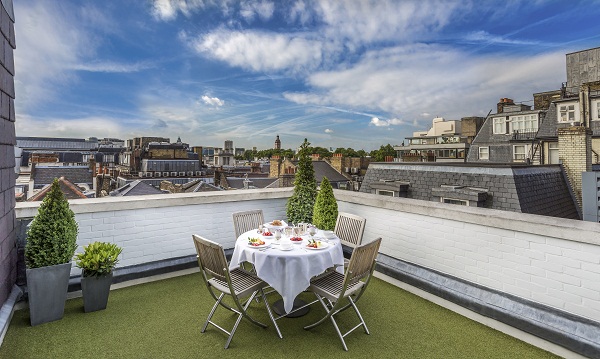 The view of the Carriage House from the Penthouse roof terrace

Standing at the very top of the building, it seemed logical to complete the tour in the other direction, and here The Stafford really came into its own. A little unnoticed door led down into the wine cellars and the smell alone – a cool, aromatic smell – transported me instantly to France and all the wine cellars I’ve happily visited there. 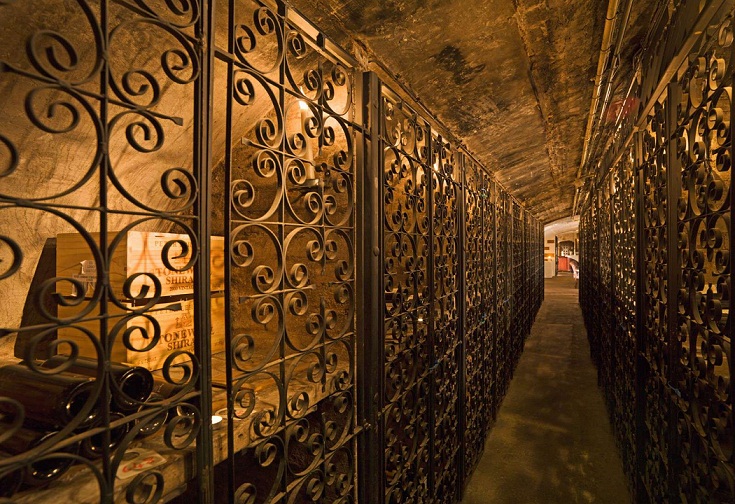 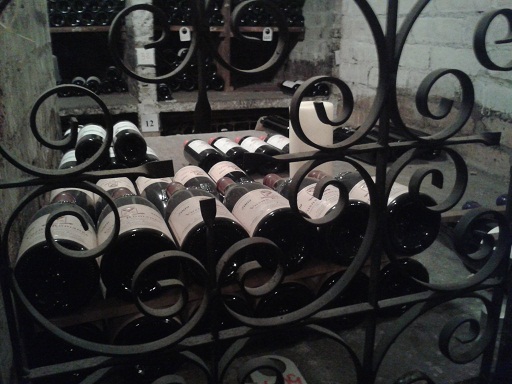 The cellars contain around 8,000 bottles of wine

Built in the 17th century, the 380-year old vaults house more than 8,000 bottles of the finest wines, the dusty bottles piled up behind wrought iron doors.

The hotel hosts events such as wine-tastings and dinners down in the cellars where the flickering candlelight would really create an atmosphere and members of the Royal family have dined there over the years.

In fact, some of the doorways in the brick walls are reputed to lead straight to St James’s Palace just down the road. 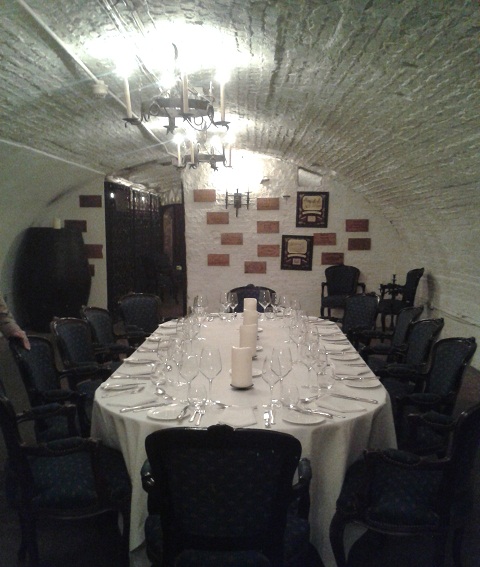 The Stafford holds wine-tastings and special wine-themed dinners in its cellars, which are also hired out for private parties

The Stafford hotel London during the war

More recently, the cellars were used as air raid shelters during the Second World War, and Canadian and American officers even lived down there for a time.

Old posters and newspapers are kept on display in the far corners which is a moving sight, and if I am ever looking for a unique place to hold a dinner, I’ve found it in The Stafford’s cellars.

American Bar at The Stafford hotel

One hint at the beginning of my stay that The Stafford might not be all that it seemed was its bar. According to the hotel’s history, during the 1930s most West End hotels in London renamed their bar ‘The American Bar’ in an attempt to attract the business of the increasing numbers of visitors from the US, and they all started serving exotic cocktails such as Manhattans, Sidecars and Martinis.

While most hotels since renamed their bars, The Stafford remains one of only two in London that have kept the name (the other one being the Savoy).

But the unique thing about The Stafford’s American Bar is the sheer amount of stuff which is packed into a fairly small space. No inch of the ceiling or the walls is left uncovered:  there are ties, baseball caps, photographs, model planes – even a couple of bras hanging there. 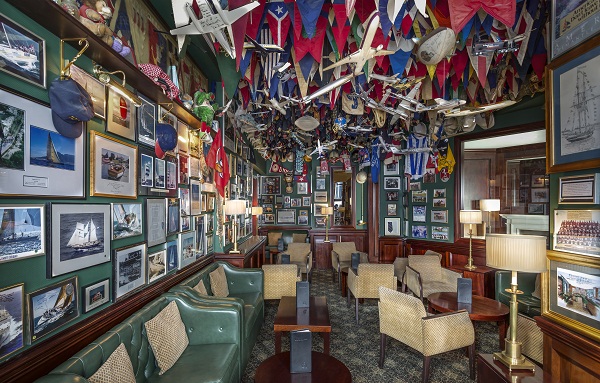 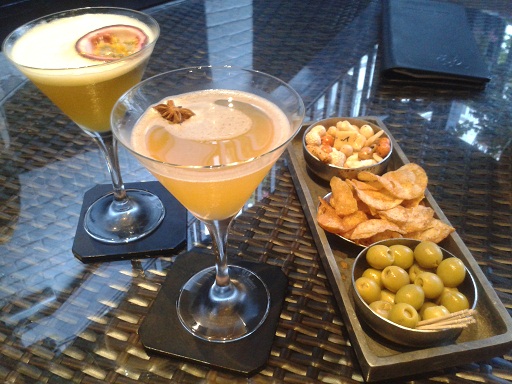 Some very fine cocktails: a While Mouse (right) and a Spitfire

I could see its quirky and historic appeal but the sunny weather was warm enough for us to have our top-quality pre-dinner cocktails and our evening meal outside [Note: the hotel’s main restaurant, The Game Bird, wasn’t open during this review stay so check out my latest review of The Stafford hotel for the full Game Bird dining experience).

The menu wasn’t the most exciting I’ve seen, being mainly club sandwiches, burgers and fish and chips, but the New York strip loin was tasty, as was the pea and mint risotto, even if it was rather small. We’d started off with a couple of the menu’s ‘small plates’, sashimi tuna and smoked salmon blinis and finished off with ice-cream and a trio of mini-desserts in the cafe gourmand option.

At breakfast the next day there was a good buffet selection and the usual range of cooked options, but it wasn’t ideal that many people had to wait for up to 10 minutes before being seated as there weren’t enough people clearing or laying tables.

However I’d slept very well on a beautifully cosy mattress and the room had been very nice indeed, with a decent TV, fridge and coffee-machine, lots of magazines, power points, a vast bathroom and nice touches such as bath salts – although there were some odd choices too, such as not including conditioner in the bathroom. (You could phone up for some but I was halfway through my shower before I noticed).

As I left in the pouring rain, Pierre very kindly lent me one of the hotel’s massive umbrellas which was excellent customer service. Now all I need to do is find an excuse to go back to those wine cellars and actually taste some wine this time…

Hotel information and to book The Stafford

Check availability and book The Stafford

The Stafford hotel is a member of the Preferred Hotels Group of independent hotels.

If you love reading about luxury hotels in central London then read these great reviews: A luxury stay with Michelin dining at St James’s hotel and club; One Aldywch hotel, London: a Lion King-sized hotel; Rooftop cocktails and a spa make The Moncalm Royal London House a top-to-toe hotel