With every cloud there comes a silver lining and the missing of a flight meant an unexpected overnight stay at Hotel du Vin Bristol. 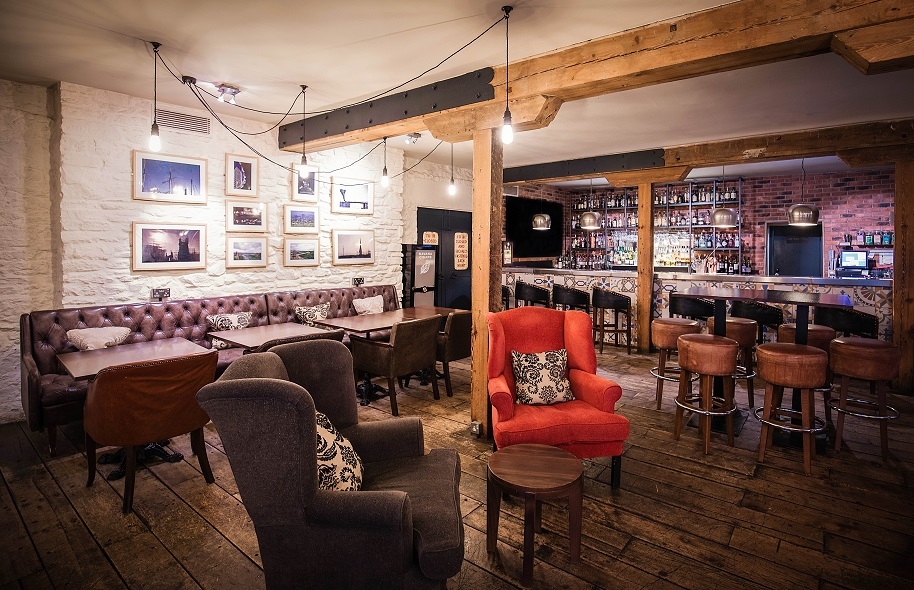 I’d long been aware of the Hotel du Vin group founded by Gerard Basset and Robin Hutson back in 1994 (they had met while working for the excellent Chewton Glen, one of my first reviews for ALadyofLeisure.com and still a firm favourite).

Hutson has since gone on to found the Pig hotel chain (see my review The Pig near Bath: Impossible not to love it) so frankly I should have got round checking out Hotel du Vin much sooner. However I had my doubts, as the chain was sold, first to Malmaison and then to private equity outfit Frasier Hospitality, so I had thought it might be a touch corporate and soulless now. 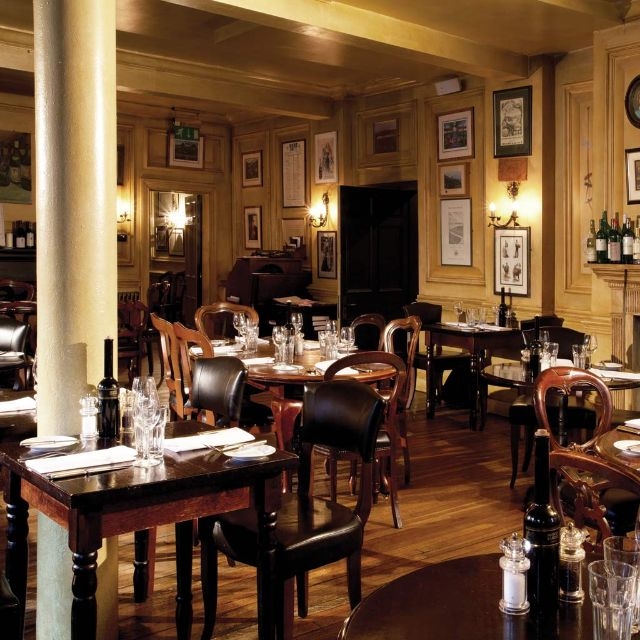 Thankfully judging by my experience at Hotel du Vin Bristol at least, that doesn’t seem to be the case. A ten minute taxi ride from the station and we were dropped at its pretty courtyard entrance which declared itself to be the site of Bristol’s last remaining sugar house, a legacy of the city’s years as a trade centre and Britain’s second city, when instead of the current view of the road there would have a river crowded with boats unloading their goods for refinement and distribution.

This sugar refinery was built in 1728 and operated until 1831, becoming a warehouse and then lying derelict for years until being sympathetically restored, opening as a Hotel du Vin in the now Grade 2-listed building in 1999. The inside of the hotel is like a cosy rabbit-warren due to being made up of several buildings knocked together over the years, and in keeping with the wine theme, each room is called after a different type of wine, with a little glass case containing a bottle outside each door. 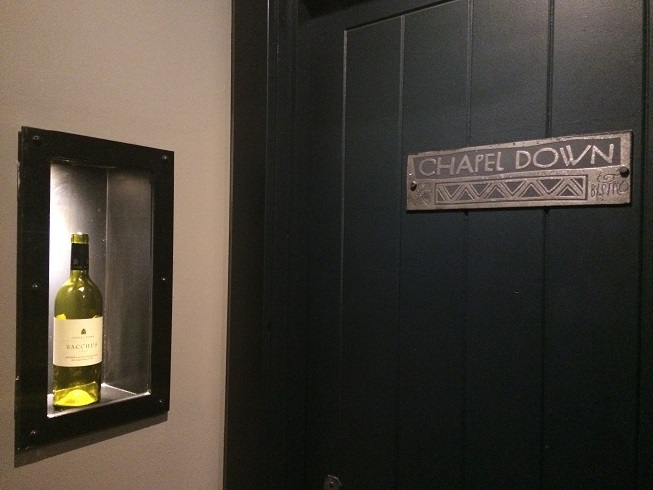 Each room is named after a different brand of wine, such as English winemaker Chapel Down 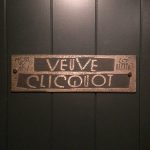 Our room was the Veuve Clicquot and the champagne theme was continued inside, with the distinctive yellow-labelled champagne bottles decorating almost every surface.

The room was much larger than I’d been expecting, with high ceilings and a mezzanine level. Downstairs was a vast king-sized bed, an en suite loo and separate lounge area containing a Chesterfield-style sofa and a desk, while on the open balcony was not one but two baths, a walk-in shower and yet more Veuve Clicquot bottles. 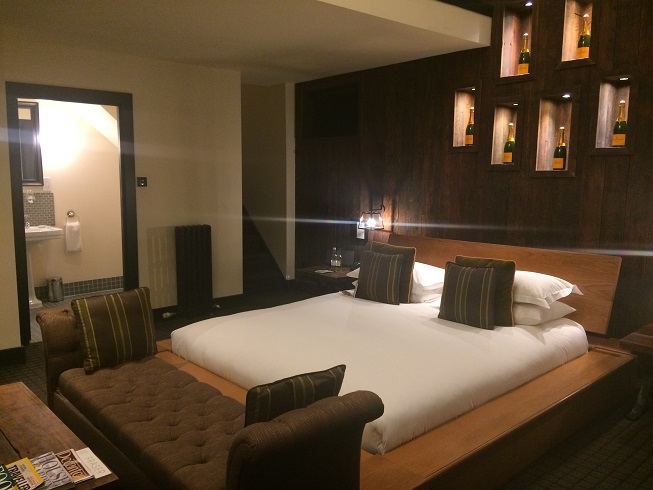 The lower level of our bedroom at Hotel du Vin Bristol, complete with Veuve Clicquot-themed wall

A very romantic evening could be spent drinking fizz in the bath while your partner did the same in the neighbouring bath, but as I was with a friend rather than a partner it seemed more appropriate to take turns while the other one watched TV from the bedroom level. 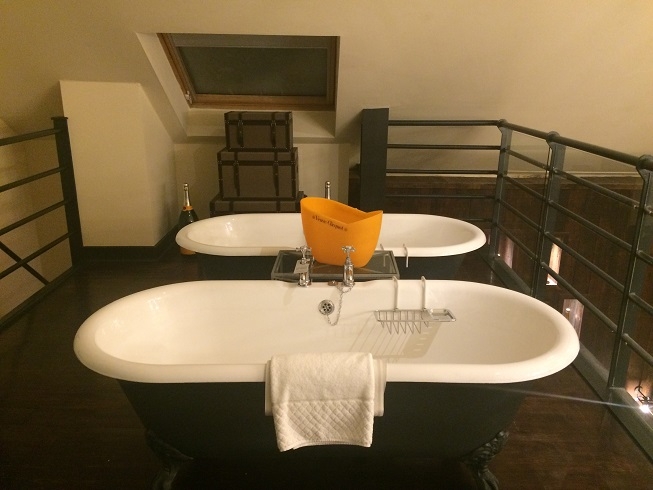 Dinner was also an unexpected treat: the restaurant pulled off the difficult trick of being large but cosy, the menu was a well-thought out French-themed range of everything from bar snacks and salads to Chateaubriand and venison pie and had a detailed description of where all the meat, fish and cheese had come from on the reverse. 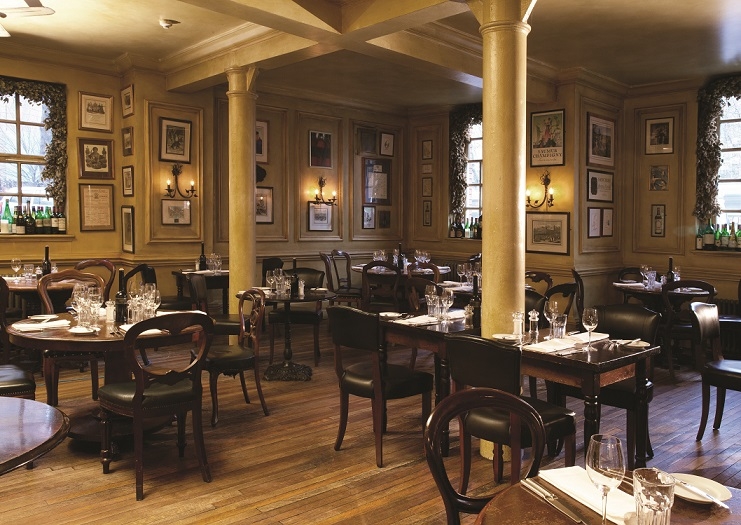 We had smoked salmon and roasted tiger prawns to start with Devon crab cake and Bouillabaisse fish stew to follow – all excellent in taste and presentation (although I could have done with a soupier Bouillabaisse) and accompanied with a very good wine from McClaren Vale recommended by the sommelier. 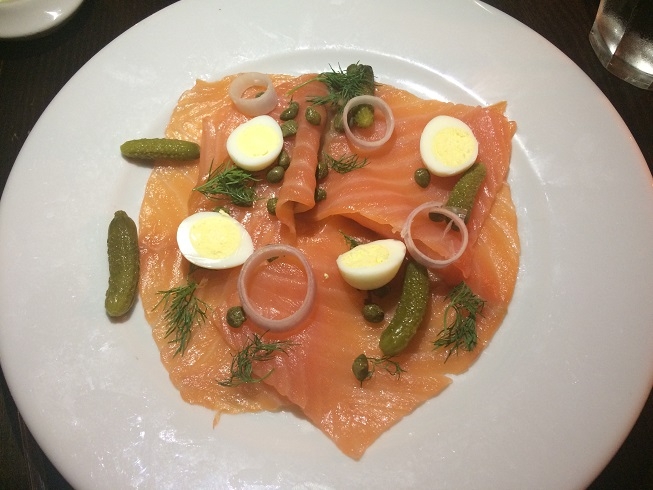 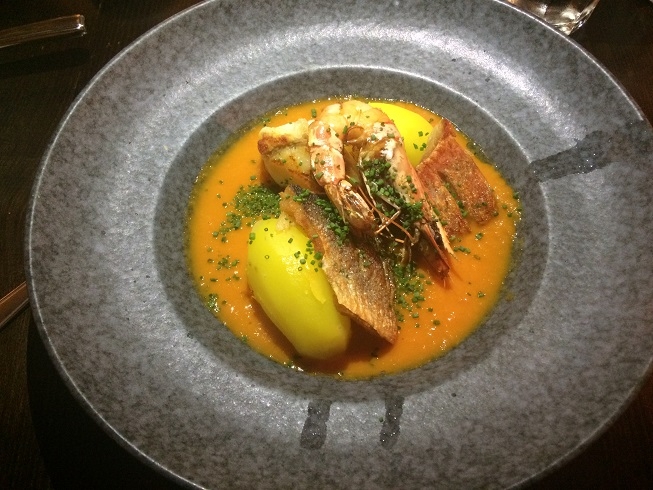 There was a decent buzz to the place too, with fellow diners being a good mix of hotel guests, locals, friends, businessmen and couples having a romantic evening (maybe they should have had our double-bath balcony). Breakfast was plentiful and livened both by cute milk jug cows and by the appearance of comedian John Bishop at the next table. We finally headed off to the airport – 24 hours later than planned but very much the better for our impromptu Bristol break.

If you’re looking for hotels in the South West then look no further: The Headland hotel, Cornwall: seaside luxury in the heart of Newquay; The Pig near Bath: a heavenly, foodie, country retreat; Lucknam Park hotel near Bath: my Palladian mansion for the night; Cornish spa delight at Mullion Cove hotel, Lizard Peninsula; A romantic seaside stay in a beach suite at Cary Arms and spa, south Devon