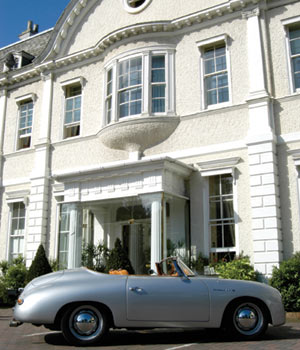 Cannizaro House in Wimbledon. Sadly that isn’t my car.

A stay at Cannizaro House Wimbledon

There is something rather delightful about packing to spend the weekend in a hotel just four miles from your home. It yields all the excitement and anticipation of a trip away without any of the angst and despair caused by realising you have to drive across London in the rush hour and then get snarled up on the Hammersmith flyover.

Cannizaro House is now owned by Hotel Du Vin so will have changed since my visit. If you’re interested in a recent Hotel Du Vin review then check out https://www.aladyofleisure.com/hotel-du-vin-bristol-review/

And the journey home! Many a relaxing weekend away has been ruined by roadworks on the M1, a lane closure on the A3, the sheer awfulness of driving through Wandsworth on a Sunday evening.

So to do away with all that unnecessary travelling seems to me to be utterly sensible.

Some would not agree. I recently had lunch with a tour operator who maintained that half the fun of a holiday is the fact you have to travel to get there, thus giving you a sense of achievement and new territories gained when you arrived at your destination.

To which I merely said ‘the journey home’ and ‘the South Circular’ and he paled and said I might have a point.

So it was with a light heart that I packed my suitcase – amazing how you need almost the same amount of stuff when you’re only going away for one night as if you’re off for a month – and pootled off from Battersea in my little Fiat.

The hotel’s restaurants look out onto 34 acres of country park – and yet it still has a London postcode.

Not too many minutes later, I was driving into the car park at Cannizaro House Wimbledon and not missing the Hammersmith flyover at all.

It had been suggested I visit Cannizaro House because of the new trend which is being pitched by the travel industry as the theme for 2014 – the ‘Near Away’. Forget the Staycation, that’s just so 2012. Now people are so fed up with travelling anywhere that they are particularly keen on staying put.

Center Parcs was was just one of the holiday companies which had mentioned this development – the majority of visitors to its Sherwood Forest site near Nottingham come from just 20 miles away.

I sat next to a lady from Chewton Glen spa hotel in the heart of the New Forest the other day who said that some of their guests actually just walked over from their homes.

Now I wasn’t sure that this would catch on – it is fun to go to new places, after all, rather than just down the road – but Cannizaro had a special tang of nostalgia for me. While growing up in Wimbledon I had spent many happy hours roaming around Cannizaro Park, playing hide and seek and Cowboys and Indians and all those things that kids did before X Boxes and Minecraft.

I had never been to the house itself, which quite possibly wasn’t even a hotel when I was young, so I was intrigued to see what it was like. 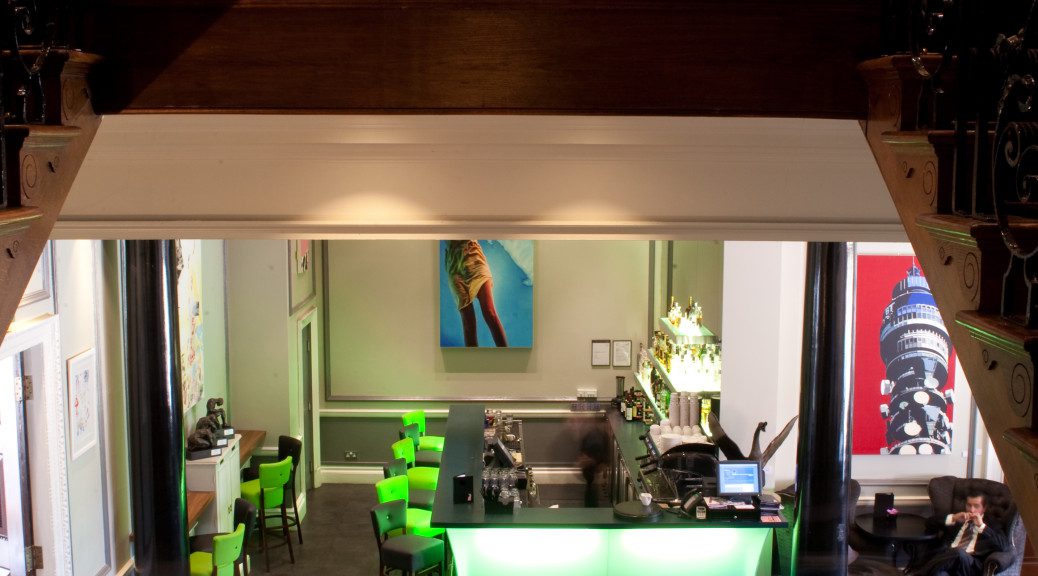 The entrance is to the left of the piano, the bar straight ahead and the restaurant and Orangery to the right from this angle.

I found it rather pleasant, on first impressions. The entrance is suitably grand as befits a country house hotel, even one that is in a London postcode, and opens straight up into a plush bar and lounge area, complete with a grand piano for guests to play. I resisted the temptation.

In fact, it was all rather busy when I arrived as they were hosting a wedding show, so lots of brides were wandering around – some prospective, some models wearing the latest in bridal dresses – and there was an impressively-old Rolls-Royce parked outside.

While the bar area itself is rather small and even somewhat soulless, the real heart of the hotel is in the lounge which boasts comfy sofas, splendid-looking afternoon teas and armchairs just calling for a book, some slippers and a nice warming drink. 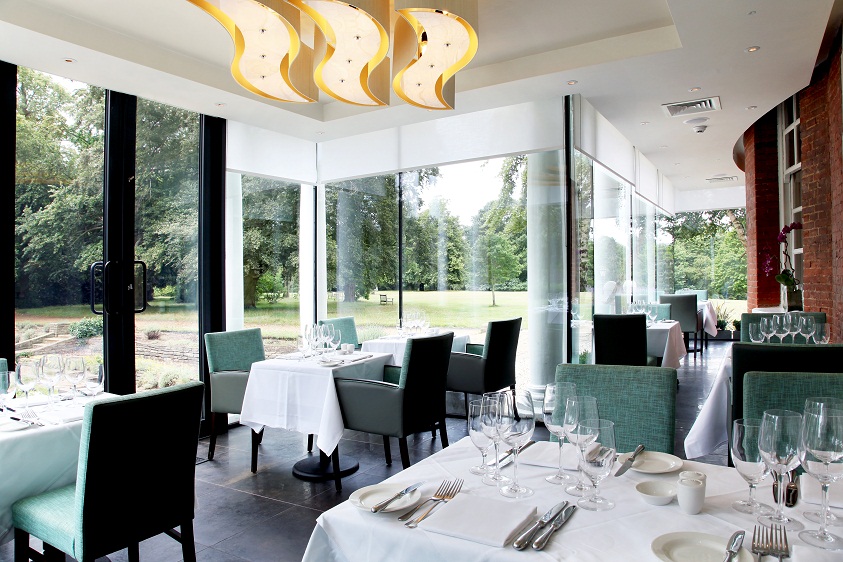 The hotel’s newest extension houses the dining room which looks out onto the lawns and sunken garden.

The dining room is off to the left, while the hotel’s pride and joy the Orangery is straight ahead, its glass walls giving a great view of Cannizaro Park’s 34 sprawling acres where I used to play as a child. The space can be used for brunch, lunch, afternoon tea or drinks and bar snacks, and was a great location even on a cloudy day, while during the summer I imagine it is extremely popular as people can spill out on the terrace.

During the Wimbledon Championships – the All-England Club is less than a mile away – there is live jazz every evening and the whole thing turns into a riotous house party which sounds great fun.

While the Orangery looked very inviting, the park called, so off I went to explore my old haunts and get thoroughly muddy. The park has a mixture of open space, ornate sunken gardens and wilder walks and if that doesn’t yield all the fresh air you desire, Wimbledon Common and its vast spaces is just next door. I headed off to revisit the Windmill and go searching for Wombles.

Back at the house, I checked into my room, a spacious double on the ground floor overlooking the park. The bed was vast and not too inundated with pillows, there was a lovely deep bath in the ensuite and the whole thing looked extremely clean and luxurious without being too over the top. 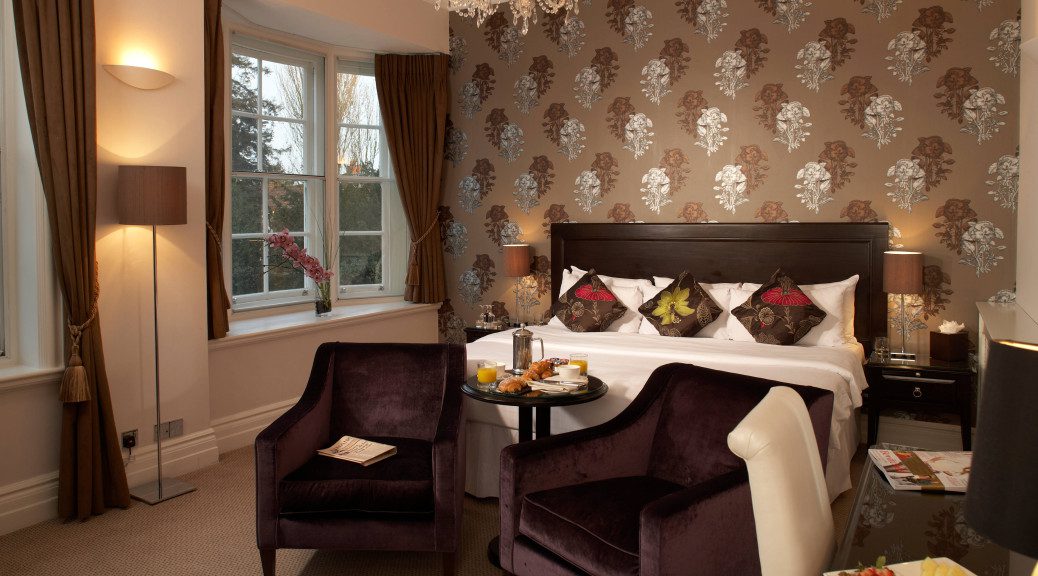 A large double room. Every room came with a delicious – if anonymous – decanter of orange port.

There were lovely touches too – a nice selection of magazines, a cheerfully-written guide to the hotel, and a glass decanter of something orange which I first thought was essential oils to bathe in or perfume the room, but which turned out, after I had asked a member of staff, to be rather delicious port. It was a very thoughtful addition to the room but slightly strange not to actually say anywhere what it was – not everyone is keen on trying out unmarked liquids. 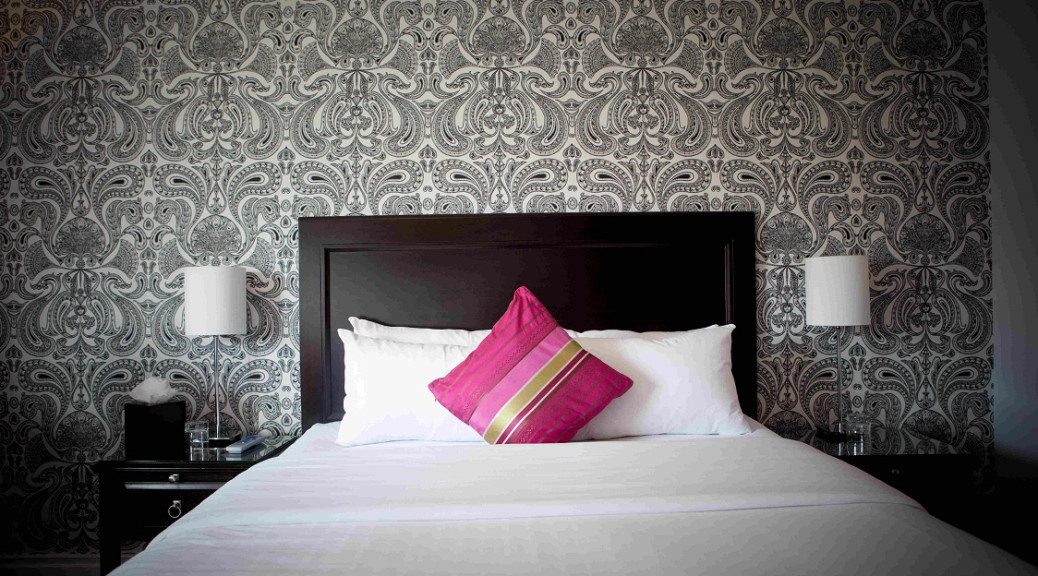 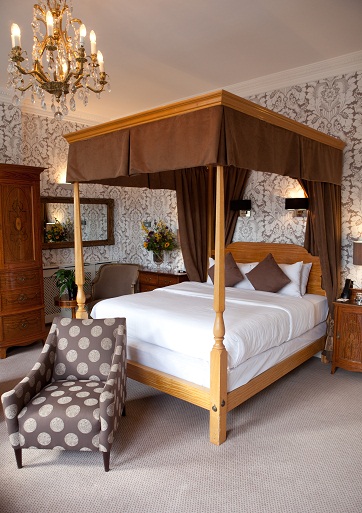 The Orangery was a lovely airy place to sit and watch the world go by, and I sampled a bottle of porter with a selection of antipasti bowls – nocellara olives and bocconcini mozzarella and red pesto which were deliciously fresh (the olives) and gloopy (the mozz). Each small dish was £4 though which meant it was extremely easy to rack up an impressive bill just to take the edge off your appetite. 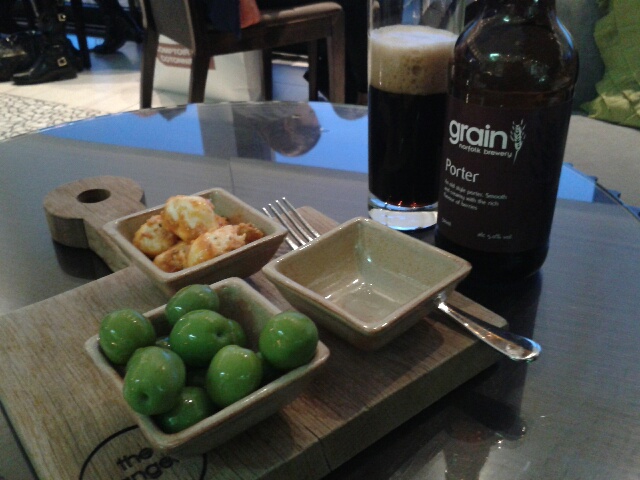 Nocellara olives and boconcinni mozzerella and red pesto, all washed down with a bottle of porter. A rather pleasant Sunday afternoon…

After a while, the background music and the general chatter grew slightly less relaxing and so I decamped to the comfy chairs in the lounge with the Sunday papers. This was more like it. I ordered some crunchy crisp radishes with sherry vinegar butter and smoked salt and felt all was right with the world. 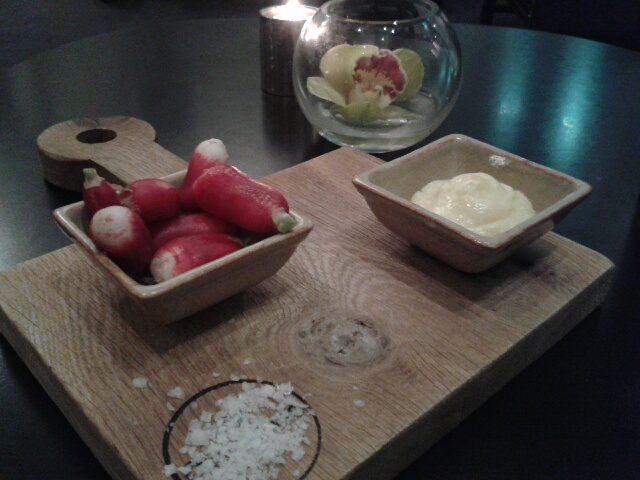 The staff – and there was a pleasingly large number of them around to attend to your every whim – were exceptionally friendly and helpful and they beavered away efficiently but unobtrusively, adding to the gentle country house air. And had the lounge been too hectic for that quiet read and relaxation which is something that country houses are perfect for, there are lovely little nooks dotted around the floors with yet more comfy chairs to curl up on so there is no excuse for not being able to get away from it all.

At around seven o’clock the doors to the dining room were opened and it was time for the main event. The glass walls had turned black to reflect the night sky outside, and there was no sign that just beyond the wall were rolling lawns.

The wine list looked impressive, if slightly limited on wines by the glass, just two of each colour, but I rather fancied a gin and tonic instead. Veronika my waitress rattled off a lengthy list of brands which was all very reassuring, and thus armed with my Tanqueray and tonic I set about making some serious inroads into the food. 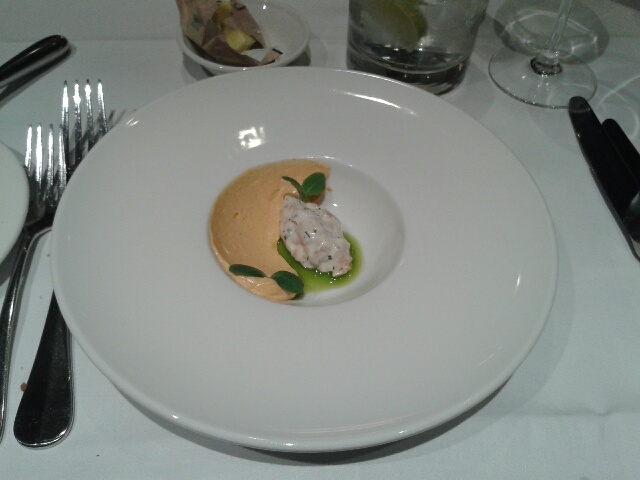 To start I chose steamed Scottish lobster mousse and scallop lasagna with sauce nantaise, which was light and delicious and the sauce so tasty that I wanted to scoop it up with a spoon.

To follow I dithered happily between the sirloin of beef, charred salmon, mushroom gnocchi or the lamb cutlet but couldn’t resist the fillet of stone bass on a quinoa ‘beach’ which was suitably shingly and served with Welsh sea vegetables and cockle and bacon dressing, although I also had some buttered curly kale on the side. 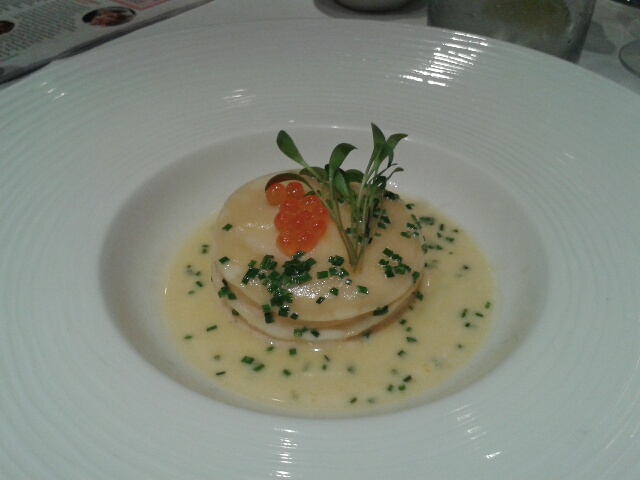 The starters ranged between £9 and £12, all written in words rather than figures on the menu which meant I couldn’t initially even see them, and the mains were around the £20-£25 mark (or twenty, twenty-five pound marks as they would put it). 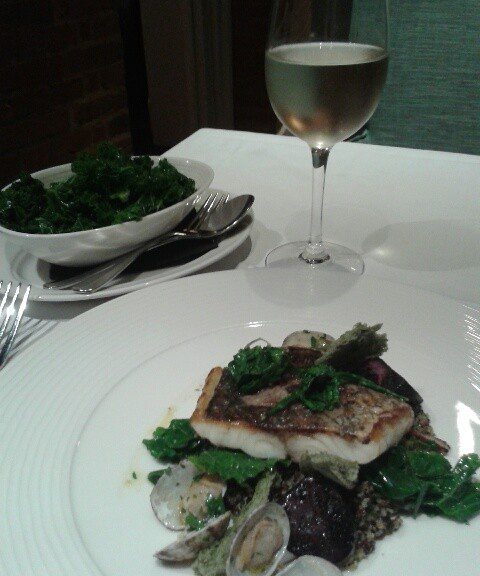 With all that and an amuse-bouche of salmon rillette, plus the radishes and so on from earlier, I felt unable to fit in a dessert although I was tempted to at least see what the chocolate gel, minted marshmallow and black sesame meringue would have looked like. But I rather boringly decided that would just be too much and I departed to bed for a glass of orange port instead.

Sadly I had to leave before breakfast the next morning but the staff kindly left me out a parcel of pastries to take with me. They were very nice but a poor substitute for a menu which continued such delights as Isle of Man oaked-smoked kipper, poached Finnian smoked haddock, eggs Florentine and a bacon butty and even suggested a glass of champagne to accompany it. Thankfully, that gives me an excuse to return.

Cannizaro House is now owned by Hotel Du Vin so will have changed since my visit. If you’re interested in a recent Hotel Du Vin review then check out https://www.aladyofleisure.com/hotel-du-vin-bristol-review/

If you love hotels close to city centres then check out these great reviews: An historic hotel stay at Middlethorpe Hall, York; A trip to Sherborne: an ancient castle and The Eastbury hotel; An unscheduled stay at Hotel du Vin Bristol