Home / Hotel reviews / A trip to Sherborne: an ancient castle and The Eastbury hotel

My recent trip to Sherborne to review The Eastbury hotel was an unexpected delight. I had been looking forward to a stay at this luxury hotel as I’d heard great things about it, but I knew almost nothing about Sherborne itself.

I knew there was a castle and a school and that it was in Dorset, but that was really about it. So the fact I found Sherborne to be a lovely place to visit shows just how important it is to explore travelling around the UK rather just heading off on a plane to an overseas destination. Hurray for the staycation! 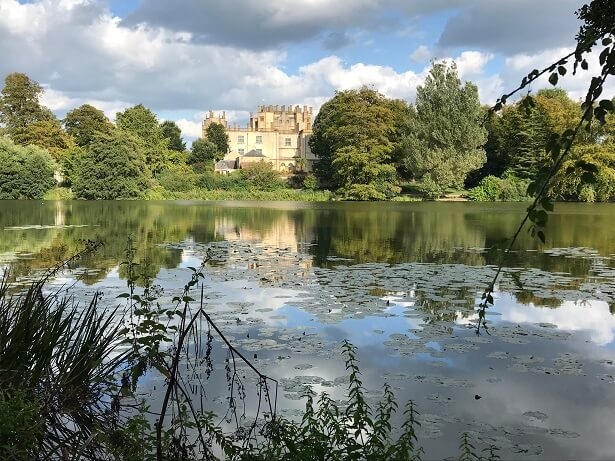 My destination: the Dorset town of Sherborne and its famous castle

My journey to Sherborne took me along the A30 and past Stonehenge and once again I was amazed how close they built a main road to the ancient site. It almost felt as if you could reach out and touch the stones and the queues of traffic were testament to the enduring popularity of this UNESCO World Heritage site. 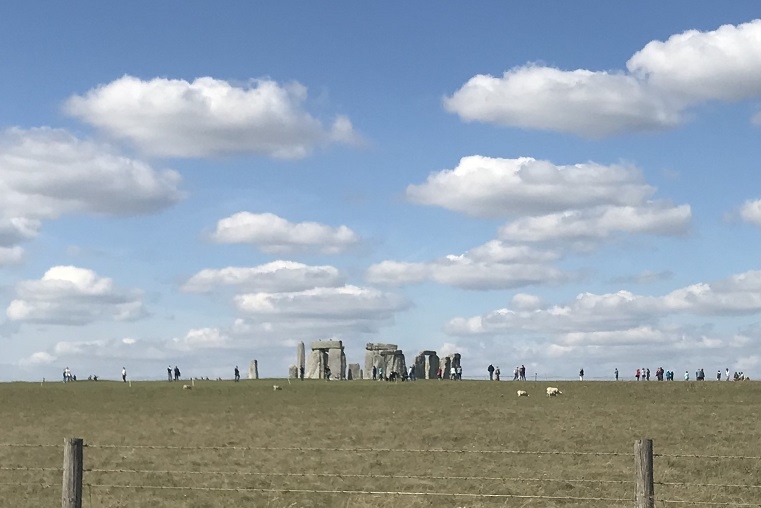 Once in Sherborne I found The Eastbury hotel easily and parked my car in the car park signposted round the back, which handily was just a few steps from my room for the night in one of its new luxury ‘Potting Shed’ garden suites.

Book The Eastbury at Booking.com

Visit The Eastbury on Tripadvisor 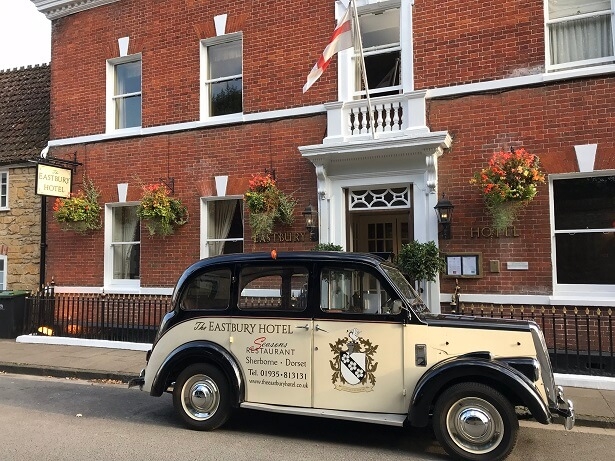 However there was no time to loiter: Sherborne Castle closed at 4.15pm (the grounds close at 6pm) and thankfully it was just a short drive from the hotel.

Check out these other great hotels: 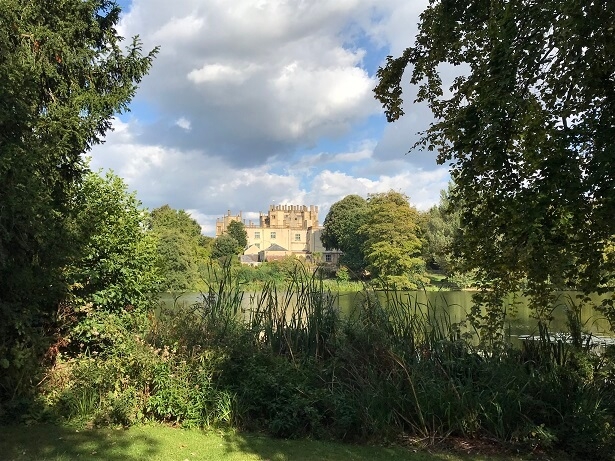 There are actually two castles at Sherborne: one is the 12th century castle which is now in ruins at one end of the 1,200-acre park and the other is the impressive house built by Sir Walter Raleigh in 1594 after he’d tried and failed to restore the original castle. The building is even more imposing than it was in Sir Walter’s time, with more wings being added by diplomat Sir John Digby when he acquired the house in 1617. Sir John’s descendants, the Wingfield Digby family, still own the castle and live nearby – staff think they might even move back one day. 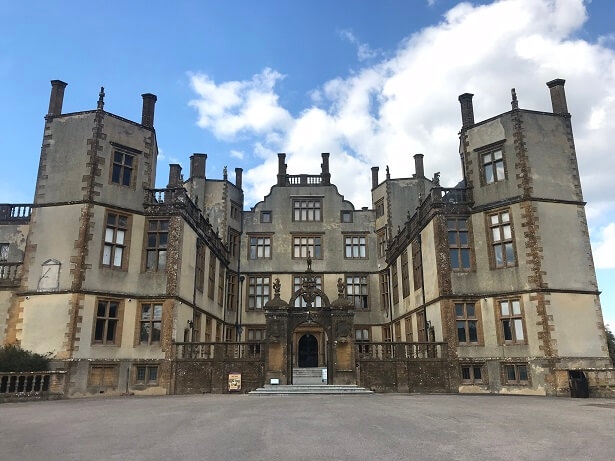 The impressive frontage of Sherborne Castle

The history of Sherborne Castle

In its long history Sherborne Castle has survived two Civil War sieges, hosted William of Orange and George III, had its grounds redesigned by Capability Brown and was a Red Cross hospital in the First World War. You can wander around the castle on your own but there are helpful volunteers on hand in almost every room to answer questions and point out items of interest and lots of printed sheets too identifying the paintings and antique furniture. 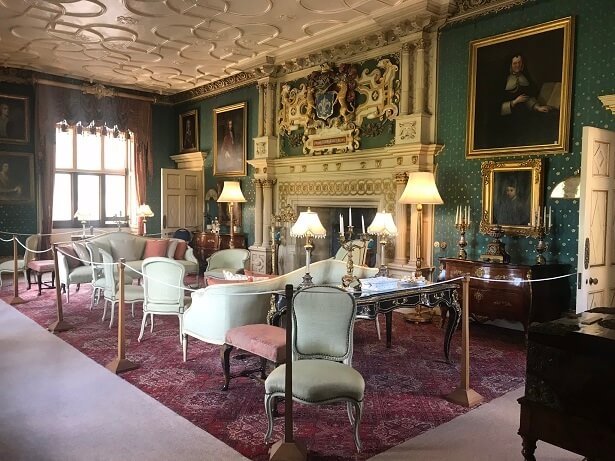 One of the beautiful rooms at Sherborne Castle 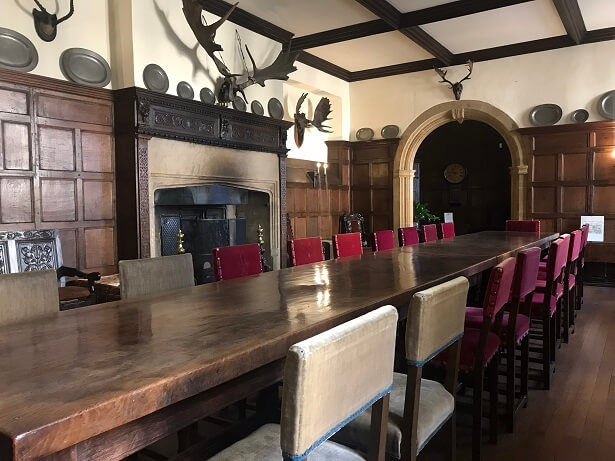 Once you’ve had your fill of the castle the grounds are all yours to explore and what a treat: it felt as if I had the whole place to myself and I wandered around for hours in the sunshine, around the lake to the ruined castle, finding waterfalls and hidden paths and treading in the footsteps of poet Alexander Pope and Sir Walter Raleigh himself (there’s even the spot marked where Raleigh’s servant supposedly doused him in water thinking his master was on fire, when he was merely having a early smoke). 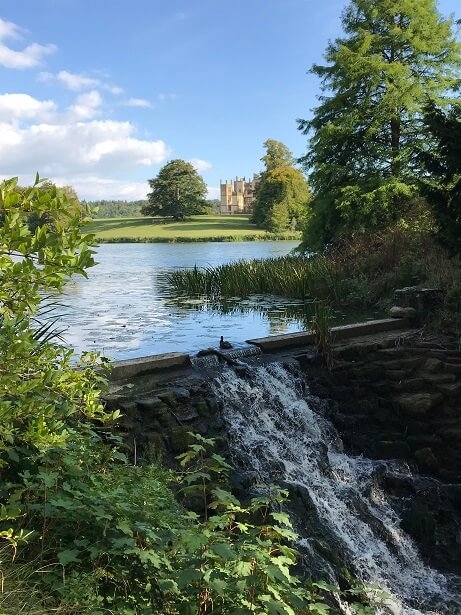 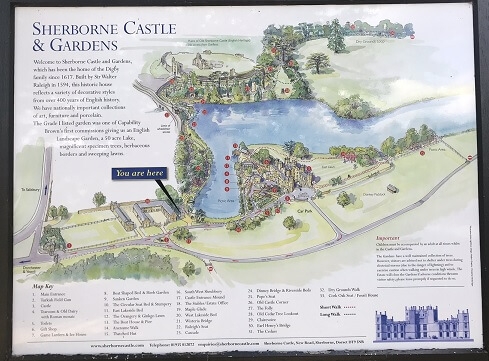 A useful map of the grounds

As the sun set over Sherborne Castle I reluctantly left the beautiful grounds to the ducks and headed off back to The Eastbury hotel to check out my room. 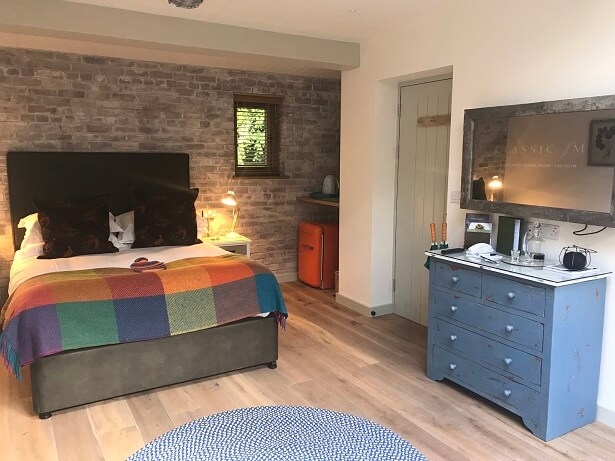 My room at The Eastbury hotel: Sage, one of five newly-launched luxury Potting Shed suites

Cottages at The Eastbury hotel

I was in Sage Cottage at the end of the garden and while I’m sometimes reluctant to stay outside the main hotel, these cottages were so robust they felt like mini hotels in themselves. The room was large and immaculate, with a large bed, side tables, comfy chairs, umbrellas and a bright Orange Smeg fridge in the corner next to the tea and coffee making paraphernalia containing fresh milk and a complimentary bottle of rose). 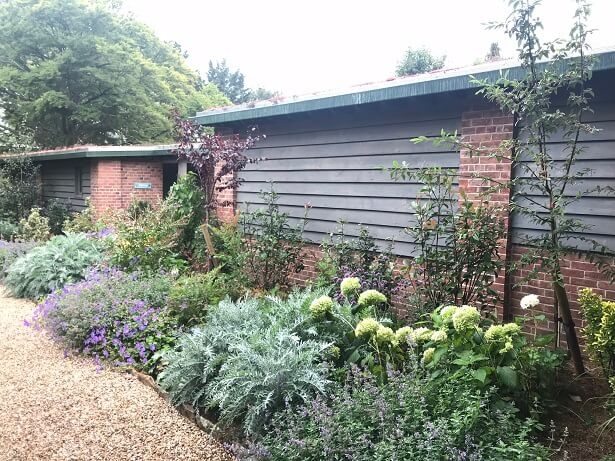 The exterior of the Potting Shed suites

The TV was playing Classic FM as I arrived and it was one of those TVs which doubles as a mirror which I’m always impressed by (saves space, looks nice and I never understand how it does that). Colourful furnishings offset the wooden floors and exposed brick wall and French windows folded out into my own private terrace.

The bathroom was airy and spacious, with a vast walk-in shower, a range of The White Company toiletries and a complimentary decanter of sloe gin, a lovely welcoming touch which I remembered from owner Peter de Savary’s other properties, the stunning Cary Arms and Spa in south Devon. There was an detailed booklet (which I love in a hotel room) containing all sorts of information about meal times, room service and the history of the hotel, which dates back to 1740 and became a hotel in the early 1930s.

Rooms and spa at The Eastbury hotel

There was just time to wander around the hotel before dinner and I peered into the new spa, a little hobbit-cave at the end of the garden which opened just days after my visit and contains treatments rooms, a gym and a hydrotherapy tub before ambling through the pleasant garden stocked with a dining ‘pod’ and animal sculptures, into the main hotel building. 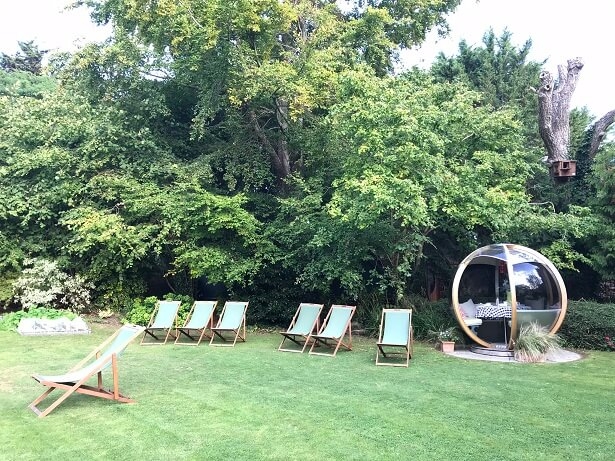 The garden at The Eastbury. You can have afternoon tea or a drink in the little pod 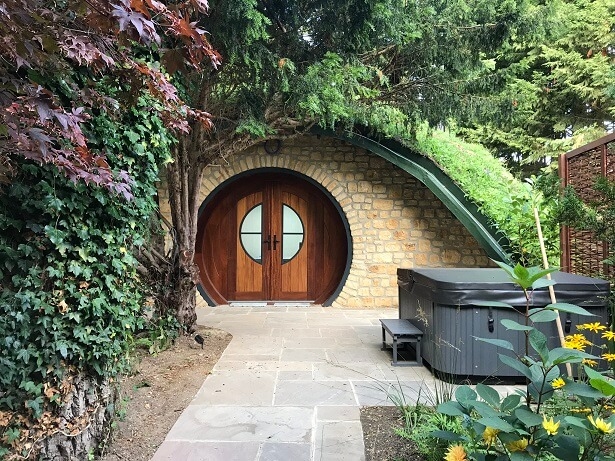 The newly-opened spa at The Eastbury hotel

There are several guest lounges, well-stocked with books, games, jigsaws and even a pool table and a bar ajoining The Eastbury’s two AA rosette restaurant, Seasons. 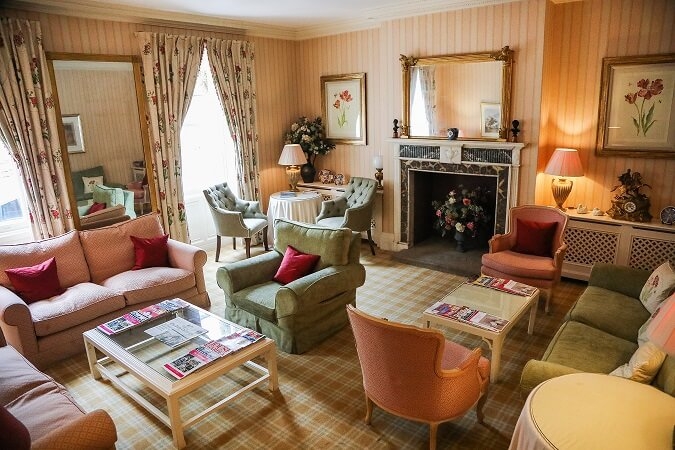 One of several guest lounges at The Eastbury

The restaurant at The Eastbury hotel

I was booked in for the tasting menu (full list of courses below) and duly enjoyed a couple of hours having some seriously good food and wine pairings, all efficiently served and explained by my waiter Sam. 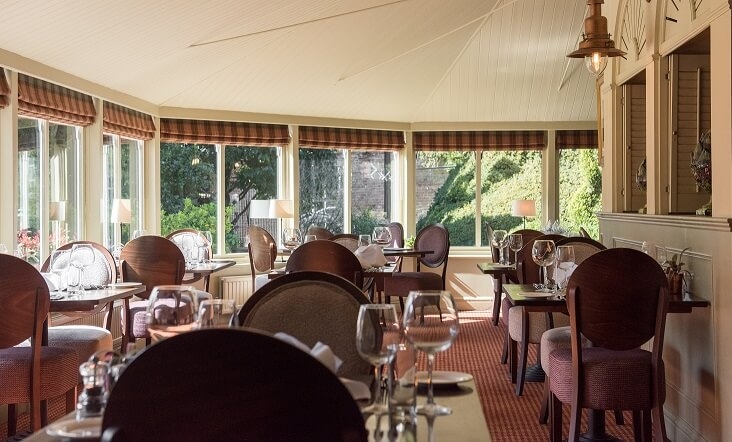 From the moment the ‘tomato butter’ arrived I knew I was in for a evening of inventive, expert cookery, which showed the chef’s proficiency but also sense of fun and technical wizardry. 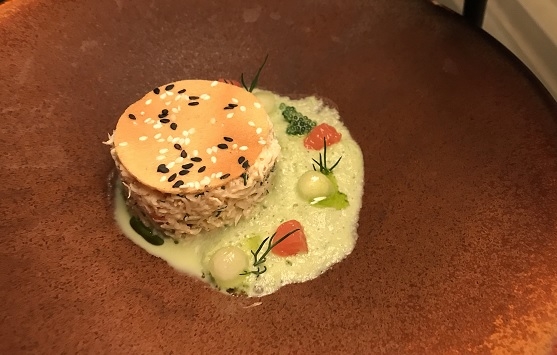 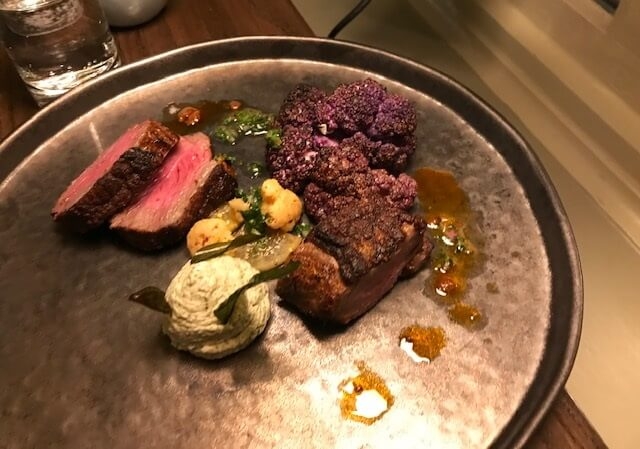 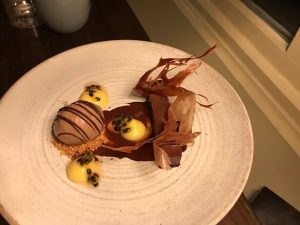 You might not think that venison tartare and quail yolk would work with juniper and blackberry but they did, and the second starter of whipped goats cheese and chilled beetroot soup was exquisite. That was followed by a delightfully refreshing Devon crab and cucumber wasabi and then the main dish of the evening; roasted lamb with tandoori spice – done to perfection.

I was starting to creak at the seams by this point but still managed to sample the lemon sorbet with limoncello and finish with just a spoonful of chocolate cremeux before staggering off to bed feeling replete and content.

There were only three bookings in the restaurant that night (it was a Sunday after all) but I hope more people get to try such impressive cooking. In fact my only (very mild) criticism would be that the decor of the restaurant could be a touch more modern: it’s certainly not faded but the style might be more contemporary to reflect such vibrant cuisine.

Breakfast at The Eastbury hotel

It was hard to emerge from a deep sleep in the comfy bed but the rainforest shower was a great way to wake up and amazingly, considering last night’s feast, I managed to put away a sizeable full English breakfast. The restaurant’s large windows look out onto the gardens which were dazzled by sunshine the day before but now offered a more typically rain-drenched view, so I was even more glad I’d seen Sherborne Castle the day before. 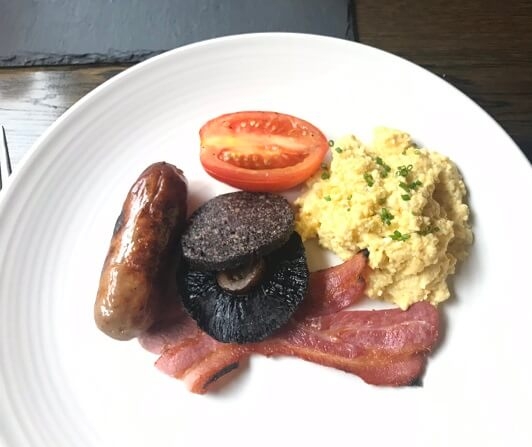 After breakfast I had a walk into town to see Sherborne Abbey (just one minute away from The Eastbury) and then it was time to head off into Devon and Cornwall. As the start of a five-day hotel extravaganza The Eastbury had certainly set the bar high. 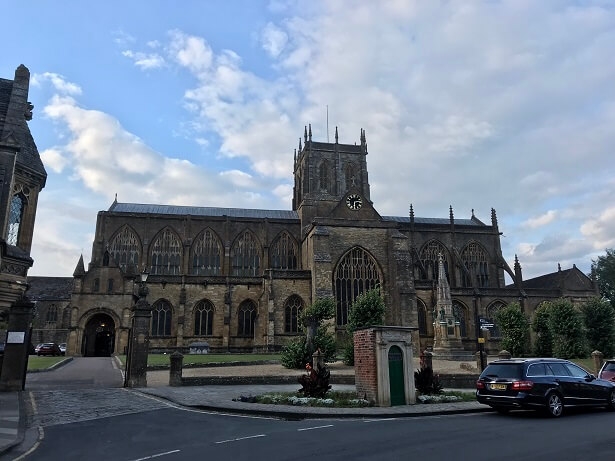 Sherborne Abbey in the sunshine

Hotel information and to book The Eastbury hotel

The tasting menu in full:

Book The Eastbury at Booking.com

Visit The Eastbury on Tripadvisor

I hope you enjoyed reading my Eastbury Hotel Sherborne review. If you are looking for other short breaks with great food then check out these exclusive reviews: Hampton Manor hotel: top class food and a step back in time; 14 wines at dinner and spa to recover in: a memorable stay at The Vineyard, Newbury; The Crab and Boar pub with rooms, great food and hot tubs; Maison Talbooth: an almost-perfect stay at this Essex hotel;