[Note: I reviewed this hotel when it was the Amba Charing Cross, but it has since been rebranded to the Clermont Charing Cross so I have updated the references accordingly]

Checking into the Clermont Charing Cross

I was offered a free glass of fizz (or juice) as I checked in, which was a nice touch, and then as I left the smart but small lobby, was surprised by the wide corridors and the six-storey sweeping staircase which brought a more genteel age of travel to mind.

The inside was more spacious than its smaller entrance lobby implied

Railway station hotels have not, in recent years, enjoyed the greatest of reputations. However there have been moves, headed by the St Pancras Renaissance Hotel, to return to the golden era of travel and grand station hotels.

This seems to be the thinking of its owners GLH, part of Guoco Leisure, who have taken the old Charing Cross hotel – originally built in 1865 ‘in the style of the French Renaissance’  – and spent millions on a much-needed refurbishment. 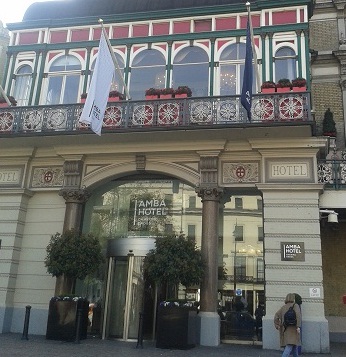 The entrance is just to the side of the station, with the restaurant located in the rather ornate glass terrace above

It subsequently opened under the new Amba brand, now the Clermont, and says it is ‘London’s most central hotel’ which it certainly has a claim to, being just yards from the original site of the Charing Cross cross from which all distances from London used to be measured. 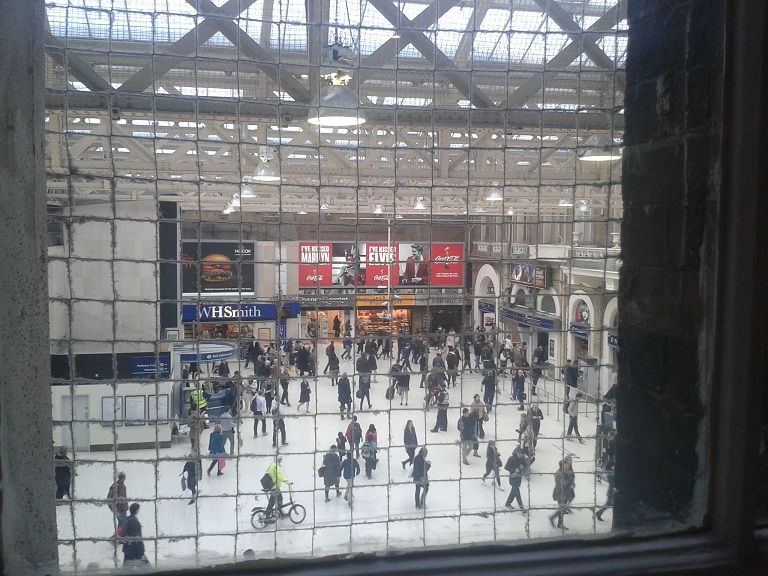 Since then it has jumped to an impressive Tripadvisor ranking of the best hotels in London aided in part no doubt by its location as one of the nearest hotels to Trafalgar Square and just minutes from the tourist hot spots of Nelson’s Column, Big Ben, the Houses of Parliament and Covent Garden.

My room, a studio suite, was immaculate, with a pristine bathroom – separate bath and shower – as well as a massive smart TV and complimentary minibar. It was certainly one of the largest hotel rooms in London I’ve stayed in so far. With an eye on the business traveller Clermont Charing Cross has fast broadband across the hotel  and each room comes with your own personal iPad. 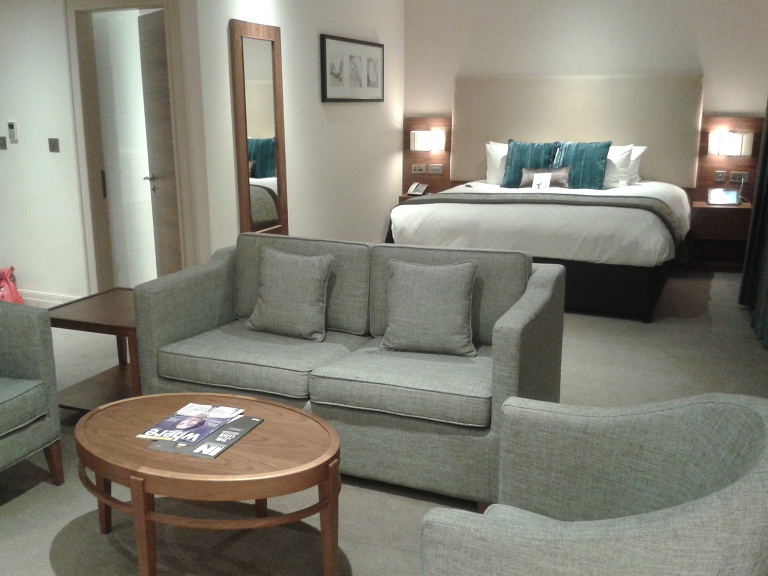 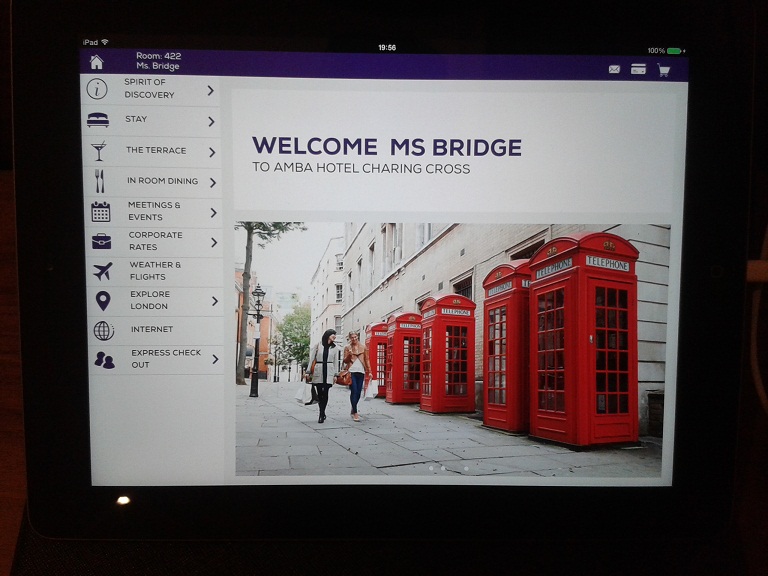 My very own iPad for the night…

The restaurant was in the conservatory-style box overlooking the Strand and the food was tasty if not stand-out – it didn’t seem like it was trying to be a place to go to if you weren’t a guest but was perfectly adequate (but the excellent rocket salad with parmesan was the biggest I’ve ever been served). 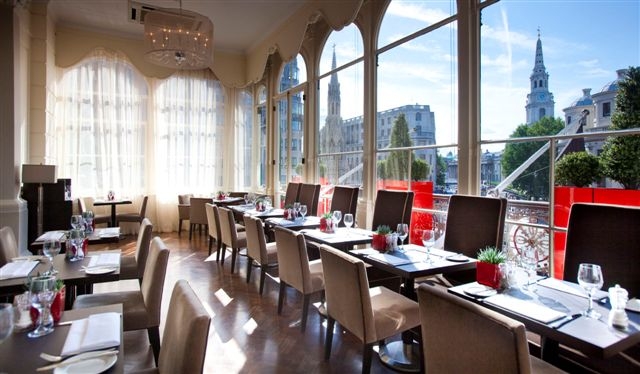 The Terrace dining room which overlooks the Strand 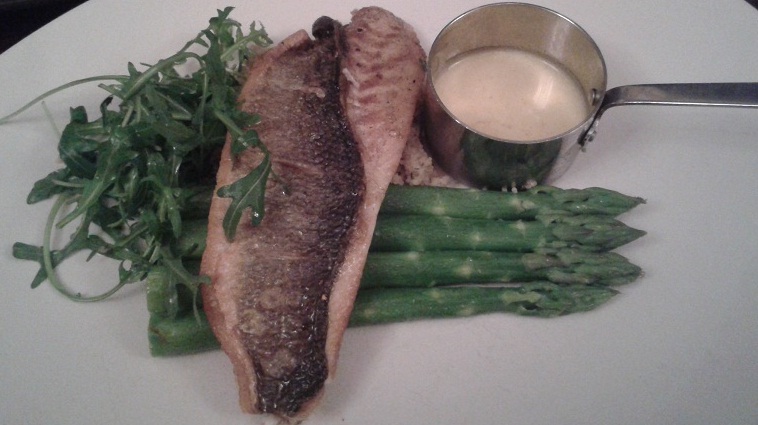 The hotel also has a small gym and a VIP area so you don’t have to eat breakfast with the masses, and while service at breakfast wasn’t the speediest staff were friendly and helpful.

The only main negative note was that in spite of having a lovely bed to sleep in, I hardly got any sleep. Even though I was on the fourth floor and the original windows have been semi-double-glazed with a kind of secondary window-fitting over the top, any sounds from outside came straight into the room, which was a surprise as the rest of the hotel felt so insulated from the outside world. 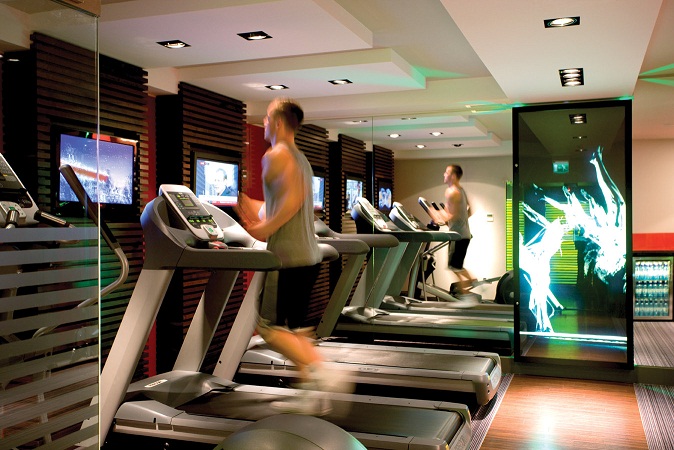 A clever use of mirrors makes the gym appear much larger than it is… but who needs the gym when London is on your doorstep?

So as I was going to sleep there was the clatter as everyone dashed to make the last trains (and a rousing chorus of Happy Birthday at the stroke of midnight to some lucky reveller), at 2am there were all the refuse trucks chugging along to clear up the night’s detritus, and at 4.30am there seemed to be some kind of running battle with shouts of ‘Leave him! He’s not worth it!’ and general shouted insults down the the Strand.

By the time the morning commute started I’d given up on sleep. So I’d definitely advise earplugs or request to have a room on the other side of the hotel (although there might be noise from the station?) – but I suppose that’s all part of being London’s (quite possibly) most central hotel.

Note: my review of Amba Hotel Charing Cross was first published a few years ago and so some of the details might now be out of date although it has been updated since