UK hotels after lockdown will look rather different to before the pandemic so what can you expect from your stay?

Contents hide
1 When will hotels open after lockdown?
2 What are hotels doing about coronavirus?
3 Are there temperature checks in hotels?
4 Will there be hand sanitiser at luxury hotels?
5 Do I have to wear a mask?
6 Are these shampoos really all mine?
7 What about cushions, throws and pillows?
8 Spa visits during coronavirus
9 Covid-safe dining
10 Who is pouring the wine?
11 No turn down? Or room information? Some things I missed

After the first four months of lockdown in 2020, to say that I was excited about getting back to hotel reviewing for ALadyofLeisure.com would be an understatement. But I was also more than a little nervous. It was hard to know what to expect. Would everything be covered in plastic sheeting and guest made to wear hazmat suits? This is my article reporting on the re-opening of the industry in June last year. 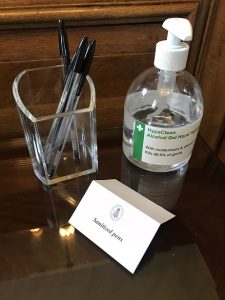 Many hotels offered sanitised pens when signing in

When will hotels open after lockdown?

Most of them will be super-keen receive guests once again but you should check with each hotel exactly what facilities will be available. Once the first lockdown was lifted in June last year and overnight hotel stays were allowed, I stayed in six different hotels to find out exactly what it was like to stay in a hotel in the time of Covid 19.

The hotels kind enough to host me were: Fawsley Hall in Northamptonshire; Feversham Arms in Helmsley, North Yorkshire; Middlethorpe Hall in York; the Bear of Rodborough near Stroud; the Hare and Hounds near Tetbury (the last two are part of Fullers-owned Cotswold Inns; and Tewkesbury Park in Gloucestershire. Three have swimming pools and spas, one has a golf course, most have a lot of outside space and one even has two massive stuffed bears to greet you at reception (no prizes for guessing which one). And each visit was full of surprises… 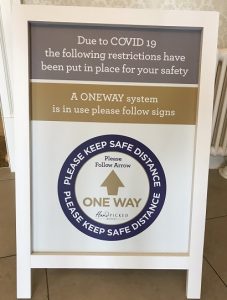 Many hotels had a one-way system in place

What are hotels doing about coronavirus?

Every hotel was different in how it has approached life post-lockdown but what they did have in common is a) taking Covid prevention super-seriously by vastly increased cleaning regimes and b) being delighted to be open once again for business. As for the details though, each approach is as unique as the hotels themselves.

Are there temperature checks in hotels?

Of the six hotels I stayed in, only two – Fawsley Hall and Middlethorpe Hall – temperature-checked guests on arrival, although Fawsley Hall was the strictest, with everyone at both the hotel itself and the separate spa building being individually checked with a temperature gun. Middlethorpe had a sign-posted fixed iPod-like temperature check on a stand just inside the door, but it was on more of a do-it-yourself basis. The others had decided against.

Will there be hand sanitiser at luxury hotels? 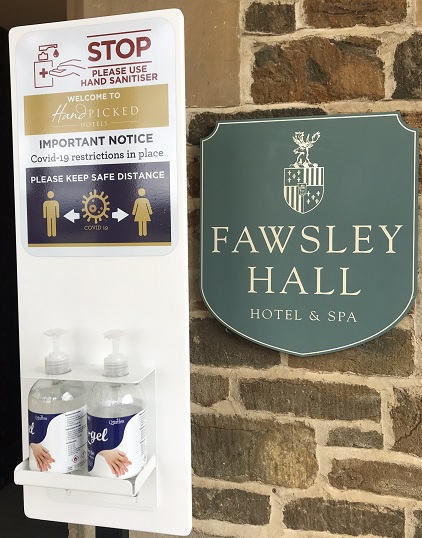 Again, Fawsley and Middlethorpe did well on this front, with large, unmissable anti-bac stations placed outside the front door and it was a similar story at the Hare and Hounds. Tewkesbury Park had two foot-operated anti-bac stations inside, again unmissable for guests, while the Bear of Rodborough had anti-bac on its garden (currently only) entrance and a member of staff making sure people used it.

Feversham Arms had anti-bac at reception but it was on the other side to the door and not easy to spot, especially when people were at the reception desk, and it wasn’t used by everyone who walked in. It was a similar story at its restaurant entrance and group general manager Ingo told me that he wanted guests to feel safe and welcome but not bombarded with notices and instructions.

Once you were inside, there were many anti-bac stations throughout all the hotels ranging from little hand pumps to fixed automatic pumps. As for cleaning, some hotels had signs declaring that the room had been specially cleaned and sealed until the guest opened it. Many hotels across the UK are not only tripling their usual cleaning rotas but using special disinfecting sprays and machines, plus some are even quarantining each room for a night after each stay. 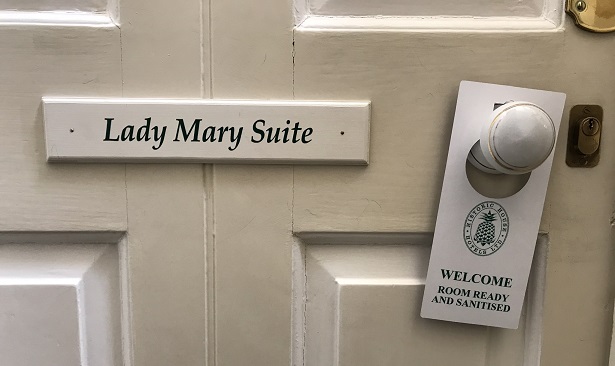 Hotel bedrooms had signs saying that they had been specially sanitised

Do I have to wear a mask?

The rules changed just a few days after my hotel visits, and under current regulations I would assume that masks will be worn by both guests and staff while moving around the hotel. Of the six hotels I visited, Middlethorpe Hall had the most obvious mask presence, being worn by all its staff including cleaning staff and waiting staff. Tewksbury waiting staff wore a mixture of visors or mask but not reception staff. Others were a mixed bag, with waiting staff on the whole not wearing masks but cleaning staff tending to do so, as well as gloves and aprons. At Fawsley Hall, the only place where I had a spa treatment (a massage and a pedicure), I was asked to wear a mask at at times and the therapist wore a visor. Irrespective of masks being worn or not, social distancing was observed wherever possible. 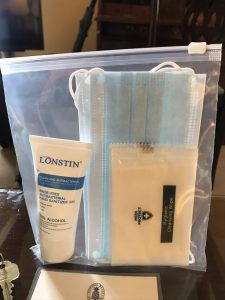 Are these shampoos really all mine?

Trying to decide whether it is OK to pocket the miniature shampoos has always been a hotel room dilemma but one which decided for me by Middlethorpe’s charming general manager Lionel who declared ‘take them away afterwards – it’s all for you and will be thrown away otherwise.’

As well as the toiletries which were packed in airport-style see through bags, the hotel had thoughtfully provided a bag with a couple of single-use masks and anti-bac wipes. The two Cotswolds Inn hotels had full-sized toiletries which were (I assume) disinfected afterwards while the sumptuous array of smellies provided in my rooms at Fawsley Hall, Feversham Arms and Tewkesbury Park all went home with me.

What about cushions, throws and pillows?

This was really a mixed bag. Some hotels had removed all cushions from rooms and public areas, while others were festooned with them. There were throws on some beds I stayed in and none on others, while pillows were in abundance as usual – no reduction in numbers at all. Spa slippers and flip flops were in plastic bags but they usually came like that in pre-Covid times, all those moons ago… And while most rooms still had all the various tea and coffee-making paraphenalia, only one (Middlethorpe) had placed them all in a little airport-style ziplock bag. 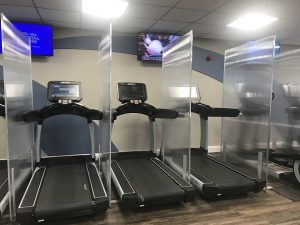 The separated machines at Tewkesbury Park

Some hotel pools insisted you book for a swim while others just limited the number allowed in at any one time, and some treatments are still limited (pedicures are allowed, eyebrow shaping is not). Some gyms had dividers between machines – such as Tewkesbury, pictured, while others didn’t.

This was another mixed bag. Some hotels had switched to paper serviettes while others were full linen. Some were laid for meals as usual – with cutlery, salt and pepper and so on – while others were almost completely bare apart from a tablecloth, which made you feel as if you had arrived at the end of a wedding when everything had been cleared away. 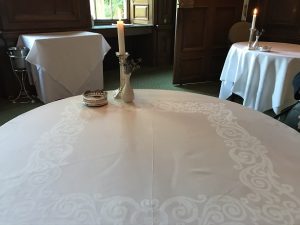 A happy medium was struck by the two Cotswolds Inns hotels which had dispensed with tablecloths but kept a lit tea light, plant and salt and pepper on the table which looked welcoming, and then once you’d sat down staff arrived with cutlery wrapped in a serviette.

At Middlethorpe you weren’t allowed to touch the pepper pot (which was wielded instead by the waiter) and salt arrived in a little open glass pot. In others you were allowed your own salt and pepper if you requested it.

All had moved to single use paper printed menus but varied on whether they replaced it during the meal or left it on the table, while Tewkesbury Park had all the menus on an app but helpfully handed out paper menus if requested. Most hotels seem to have taken some tables away so there was more distancing, and seats as well as tables were thoroughly cleaned once a party had left. 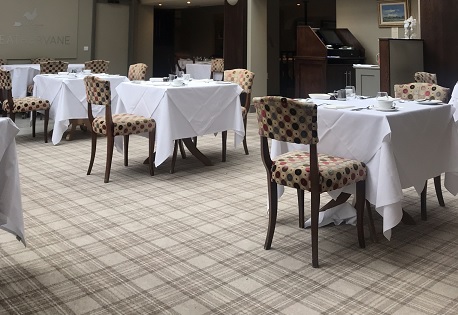 The dining room at Feversham Arms

Who is pouring the wine?

Restaurant etiquette can be a bit of a minefield at the best of times but now there’s even more opportunity for confusion. At Fawsley Hall, our waiter said he wasn’t allowed to pour the water or the wine, but could only place it on the table (which is always fine with me). Next stop, Feversham Arms, and the efficient and friendly waiting staff led by the ebullient Alex not only poured wine and water but did the whole pour-a-bit, wait-a-bit ritual. The rest were also a mixed bag of protocols. It was all very confusing. But quite fun seeing who did what.

No turn down? Or room information? Some things I missed

Stricken as I am with FOMO, I hate to miss out on any aspect of a hotel stay. The first thing I do on entering a hotel room – OK, the second thing, after taking dozens of photos before I destroy the pristine calm with my exploding suitcase – is to seek out the information book and devour the information within. From restaurant opening times to spa treatments, historical information, walking routes and ha-has, croquet lawns and dovecotes, I want to know all about it. Now due to Covid-19, this fount of all wisdom has been taken away. Haven’t we all suffered enough?! 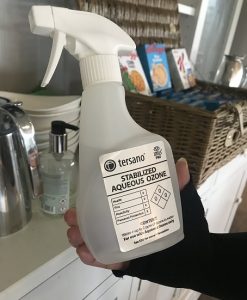 A turn-down was also out of the question. Some hotels did have a sign saying that you could ask for your room to be refreshed but the usual country house hotel experience when someone comes in and draws the curtains, tidies up a bit and makes your bed look more inviting when you’re at dinner has been ditched during Covid. I know people who hate a turn down and some (like me) who love it so it will not be universally missed. [Note: I later stayed at The Stafford hotel in central London and turndowns were very much part of the hotel experience much to my delight.]

Room service is also a bit of a divider – some love it, some never go near it – but the good thing was that all the hotels had upped their flexibility with in-room dining so if you didn’t want to eat in the restaurant you could choose from the same menu and dine in-room at no extra cost.

And the quirkiest aspect of Covid I’ve found so far? The remote control in my room at Middlethorpe Hall was wrapped in clingfilm. I’ve no idea if that’s a better idea than sanitising it afterwards but it certainly showed someone was thinking of absolutely everything.

If you have ventured out to one of Britain’s hotels yet? Let me know of your own experiences in the comments! 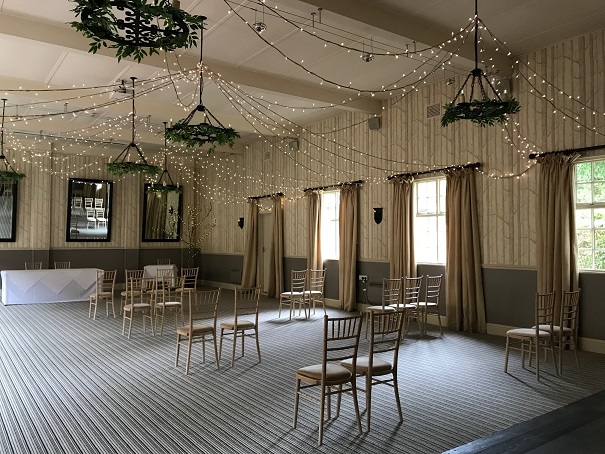 Check out the full reviews of all the hotels featured in this review: An Historic Hotels hat-trick with my stay at Middlethorpe Hall, York; A perfect Sunday roast and stay at Feversham Arms, Yorkshire; Luxury after lockdown: a Covid-secure stay at Fawsley Hall, Northants; Exploring the Cotswolds with a stay at the Bear of Rodborough near Stroud; Relaxing in grand style at the Hare and Hounds, Tetbury

Did you like my article about UK hotels after lockdown? If you did, why not Pin It! 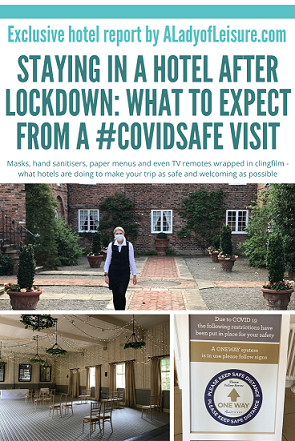