Stapleford Park hotel in central England was a real treat; a combination of traditional stately home and modern spa, with all the trimmings of a luxury hotel: staff happy to drive you to the spa at the other end of the hotel grounds in little buggies for example, or tell you about the history of the hotel, or just leave you in peace to enjoy the view, a drink or just curl up in a cosy chair with a book. 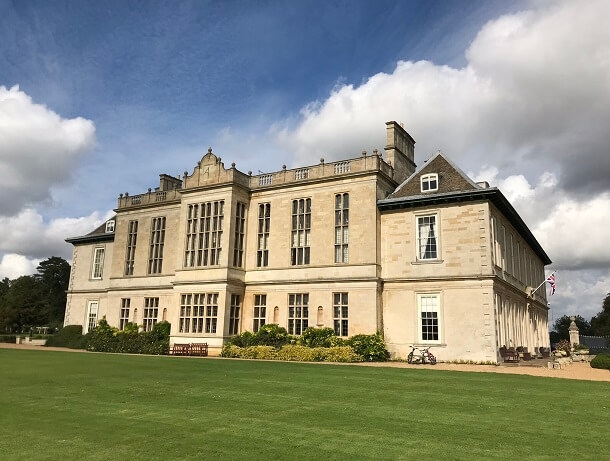 A stay at Stapleford Park hotel

Stapleford Park hotel is set within 500 acres of parkland just a few miles away from pork pie capital Melton Mowbray in Leicestershire, and arrival at the Grade 1-listed hotel is a via pretty winding drive through the woods, past a little chapel and through an old stone arch before sweeping round to the hotel itself.

It was only when I heard the receptionist answer the phone at Stapleford Park hotel in Leicestershire that I realised I’d been saying its name all wrong and it was actually pronounced ‘Stappleford’, rather than ‘Staple-ford’ – but the friendly staff at this rather smart hotel and spa said that it could be said both ways. 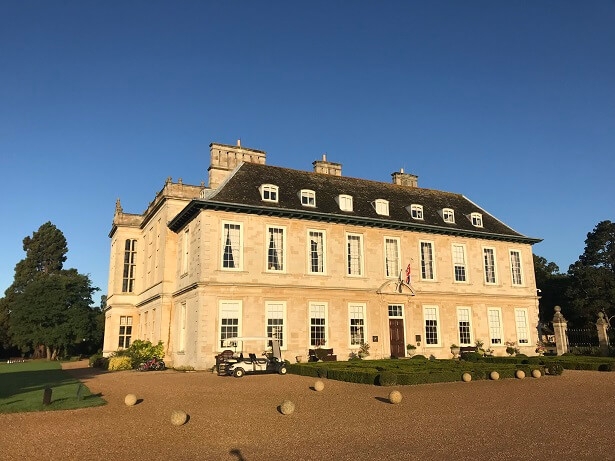 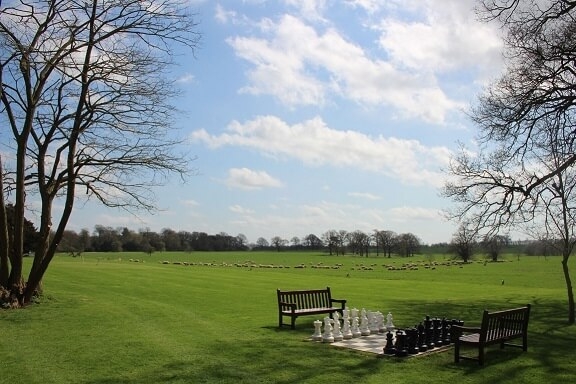 We were lucky to arrive on a gloriously sunny day and I hastily took several hundred pictures of the building in the sunshine before checking in and being shown my bedroom for the next few days.

My bedroom was right at the top of Stapleford Park’s impressive staircase in the main hall, and had the highest ceiling of any hotel room I’ve ever stayed in. 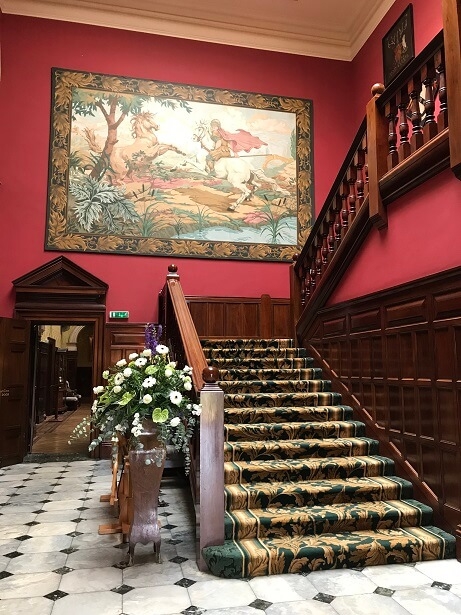 The staircase at Stapleford Park hotel is rather impressive

Called Zoffany, it was vast, with huge curtains draped over the large windows overlooking the front of the hotel, and everything you would hope for in a luxury hotel room: lots of storage space, Nespresso coffee machine, fresh milk, tea and biscuits, a sofa, desk, smart TV and large bathroom with lots of fluffy robes and towels. (I nearly jumped out of my skin when entering the bathroom for the first time as something was flapping at the window. It turned out to be the Union flag being blown about outside – Stapleford Park is nothing if not a traditional historic hotel.) 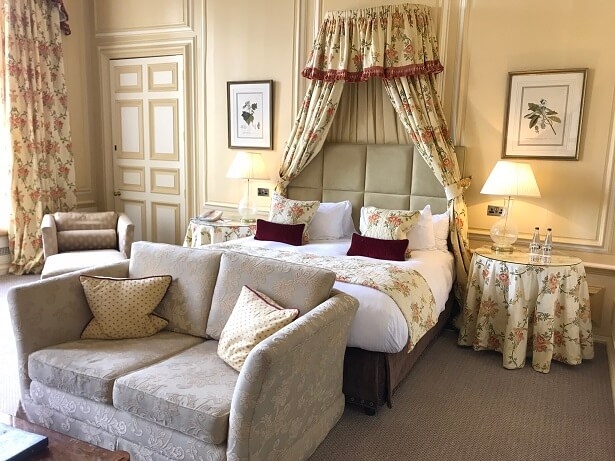 My room was called Zoffany and was vast, with the highest ceilings of any hotel bedroom I’ve stayed in 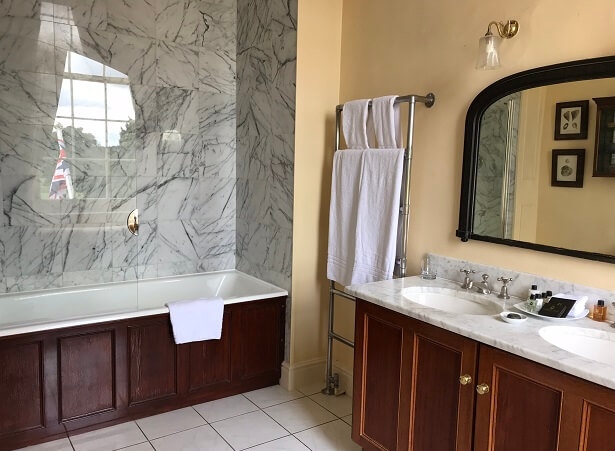 My bathroom in Zoffany bedroom at Stapleford Park hotel was large and had a deep, fast-filling bath 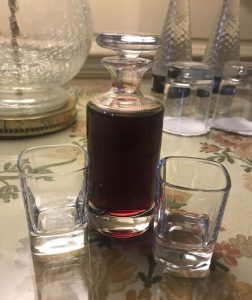 There was also a lovely little decanter of sloe gin which is always a nice touch: other hotels I’ve stayed in recently which had complimentary sloe gin were Bovey Castle and Cary Arms and spa in Devon, and The Eastbury in Sherborne, so Stapleford Park was in great company.

Click these links for some great hotels with golf courses which you’ll love:

I could have happily stayed in my room for the afternoon just lounging about, but I had a massage booked in just a few minutes’ time. No matter, I was whisked instantly to the spa (which was probably a good 10 minutes hike away). 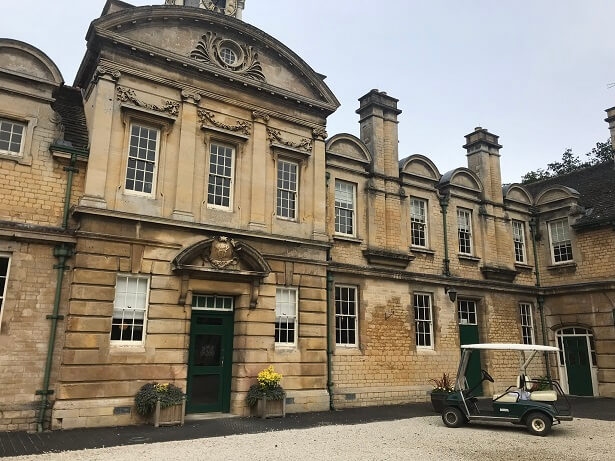 Once I’d worked out where the changing rooms and showers etc were, and where to get robes and where to go for my treatment, I had an excellent massage, made even better by the therapist being very straightforward and just getting on with it, rather that having the usual ‘sit down and we’ll have a chat’ type-thing which is always fairly excruciating. (My friend, who was travelling with me, said her massage was the best she’d ever had, so high praise indeed). 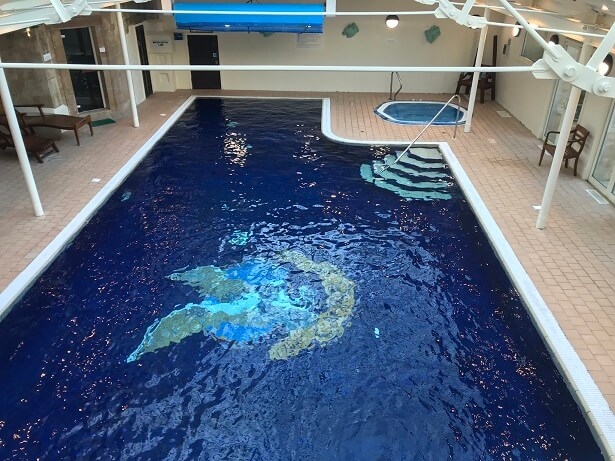 As well as the spa, which was built in the old stable blocks, Stapleford Park has an indoor pool, rather confusingly not in the spa but in the hotel building itself. I would definitely recommend asking for a proper tour of the hotel on arrival as we had assumed the swimming pool was in the spa and throughout our stay we kept finding other rooms we hadn’t spotted such as several lounges, including one with a billiard table. 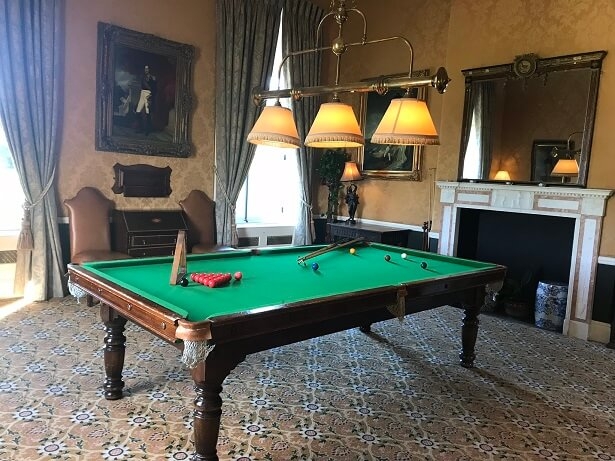 There are lots of rooms to discover at Stapleford Park, including the rather smart billiard room

It would be very easy to only discover things just as you were leaving – although of course, that might tempt you to return… The hotel map (ask for one at reception) revealed all sorts of delights to discover at this country house stay, such as a herb garden, helipad, garden chess, tennis courts and a croquet lawn. 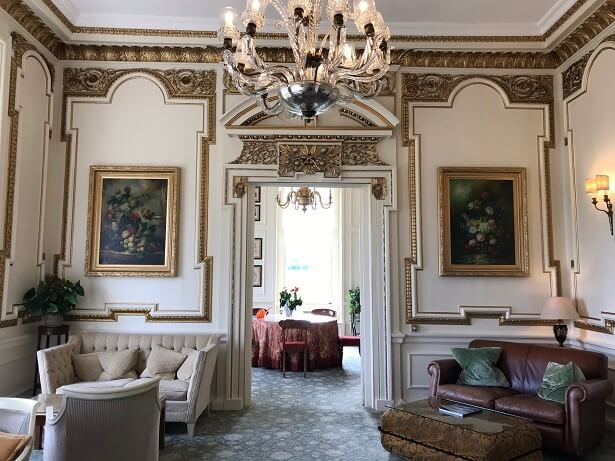 Some of the smart downstairs rooms at Stapleford Park hotel

Guests can also book various country pursuits such as archery, clay pigeon shooting and falconry which seems appropriate for a property which dates back to the 14th century and which was in the same family for a staggering 484 years (do ask the staff to show you the oldest parts of the buildings and the more recent additions – it’s hard to spot the difference in places). 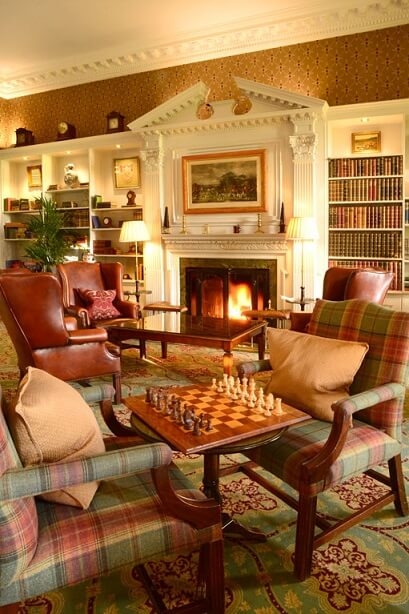 As we had the rare luxury of a two-night stay at Stapleford Park, we were having a relaxed dinner on the first night in the Library Bar and were dining in the more formal Grinling Gibbons restaurant on the second night (the restaurant is named after the famous sculpture and wood carver who decorated the room).

The Library Bar was one of several cosy rooms dotted about the ground floor and contained – as you’d expect – a bar and was lined with books. It led onto another, larger room and it was here we were directed to eat that evening, which felt as little odd at first as none of the tables were laid out for an evening meal and it felt as it we were in a lounge more suited for afternoon tea.

However the waiter quickly set the table and assured us we were in the correct place, handing us the lounge food menu which had a selection of food from snacks and starters to sandwiches and mains available from 12pm-9.15pm daily. It was a good option if you wanted to eat at an unconventional time or just grab an informal bite without having to look smart. We chose a fairly random selection of smoked salmon with brown bread, lemon and capers, truffle macaroni cheese (which was delicious – exactly the right combination of ingredients) and club sandwich (which was huge). With just a glass of wine each it wasn’t long before we were in our respective rooms and feeling very much at home. 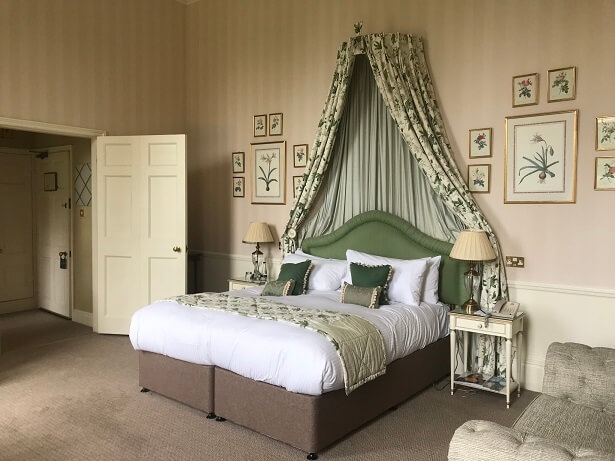 My friend stayed in the lovely Crabtree & Evelyn bedroom 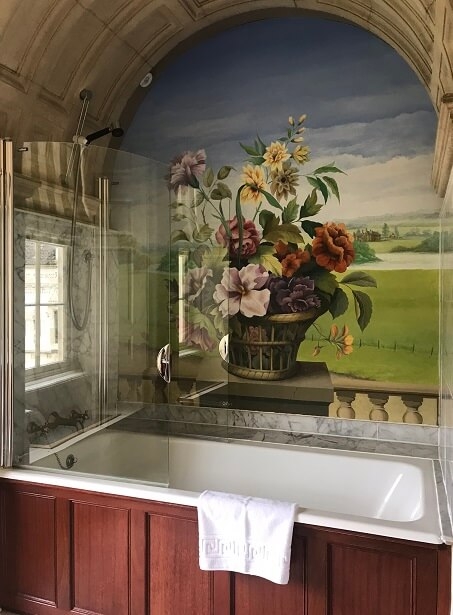 The bathroom in the Crabtree & Evelyn room

The weather next day has transformed from gloriously sunny to wild and wintry, so we ditched our plans for an early start and long country walk for a relaxed breakfast instead. The breakfast things were set up in the second main hall under the gaze of dozens of stuffed animal heads from back in the house’s history and even the grand piano had been reduced to a mere bearer of cheese and croissants. 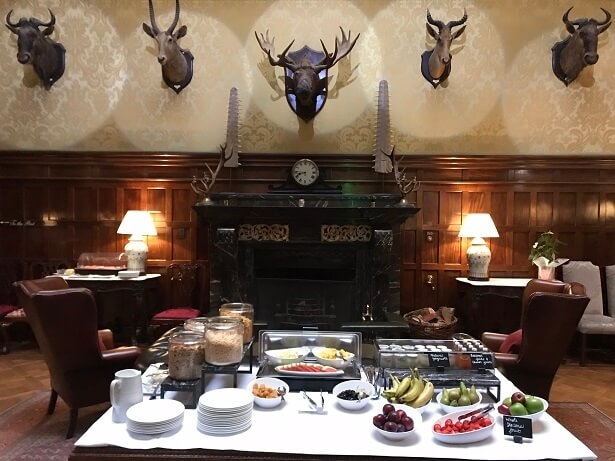 The breakfast buffet came in for some intense scrutiny…

However the choice was good with some particularly nice locally-made yogurts from nearly Manor Farm and the swift arrival of some excellent coffee. I opted for a full English and lingered over the complimentary newspaper and some more coffee afterwards, commiserating with some guests who had been hoping to play golf that morning (the hotel has since closed its golf club).

We parked ourselves in a charming little front room for the morning to read and play board games and only stirred when it was time to head to the excellent hotel and Michelin-starred restaurant Hambleton Hall. 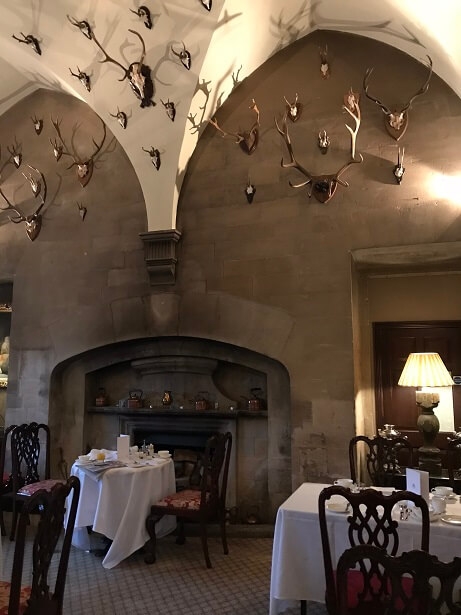 Feeling replete after our excellent lunch we returned ‘home’ to Stapleford Park feeling a little panicked about yet more food to be enjoyed in just a few hours time. However it was also a great chance to thoroughly relax in our rooms and I especially enjoyed the deep, fast-filling bath and then relaxing on my chaise-lounge pretending I was lady of the manor (I suspect previous guests which include the Duchess of York and Joan Collins – their pictures are dotted around the hotel – did much the same thing).

Due to hosting a conference the next day, the Grinling Gibbons restaurant had been relocated to the Old Kitchen where we’d had breakfast but the room was perfectly suited to hosting a formal meal.

The signs were good from the start, with an explanation in the menu of where much of the food was sourced from, including Belvoir Ridge creamery and Rutland charcuterie. 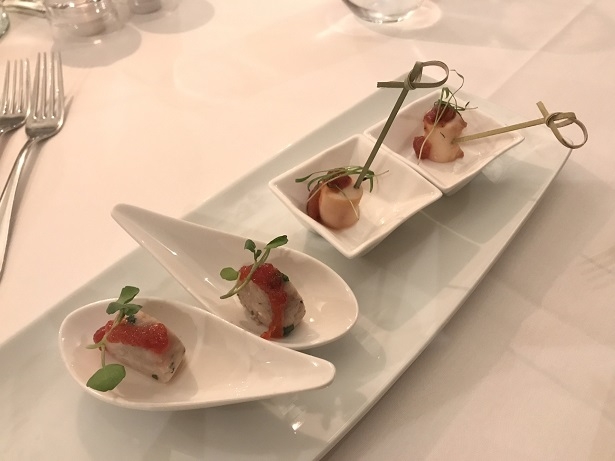 Amuse-bouche to start off an excellent meal 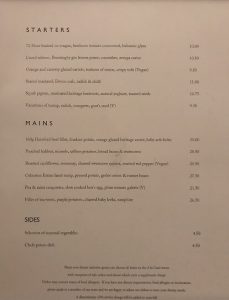 The menu at the two AA rosette restaurant at Stapleford Park

The menu was clear, classic and simple, with six starters and mains to choose from. Aside from some amuse-bouche to start the proceedings, we decided to plunge straight into the mains to leave room for dessert, so enjoyed some excellently-cooked Hereford beef fillet and fondant potato, and poached halibut with mussels, saffron potatoes and broad beans before tucking into a great selection of local cheese.

The next morning after a really great night’s sleep (the mattress had not only a standard mattress protector but an inch-thick luxury Hypos mattress topper, I have to get one!), I woke up to the sun streaming into my bedroom. 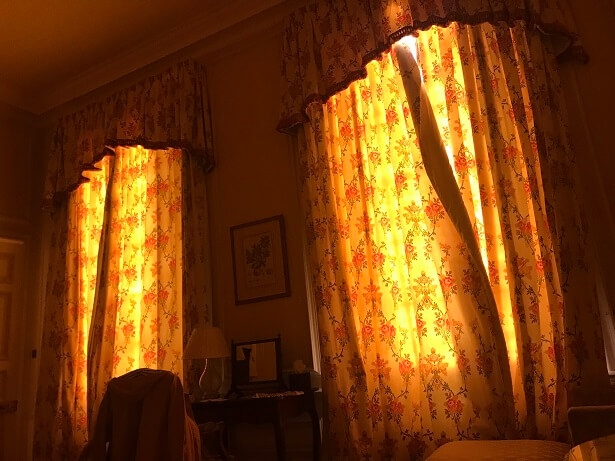 There was just time after another excellent breakfast for a walk around the former (rather water-logged) golf course (no longer in use) and even the discovery of a model railway track. 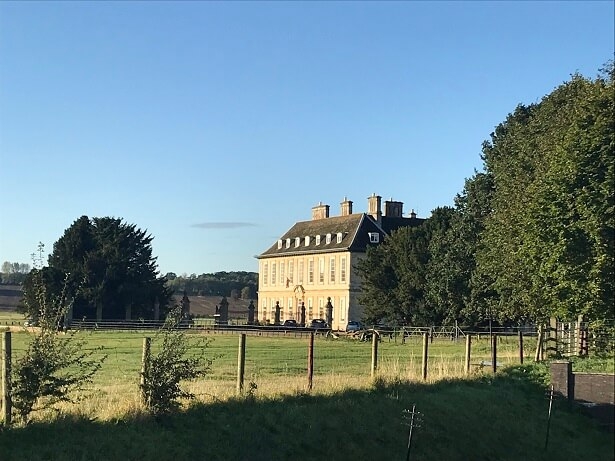 Stapleford Park from a nearby footpath

We chatted to some other guests who were also delighted with their visit to Stapleford Park and were very envious of our two nights there – there’s certainly more than enough at this luxury spa hotel to keep you occupied.

Rooms from £175 per night room only or £190 B&B, with spa breaks. Dinner, bed and breakfast deals also available.

Stapleford Park hotel is a member of Pride of Britain Hotels, a collection of 50 of the best hotels in the UK. If you liked this review then check out ALadyofLeisure.com for my review of other Pride of Britain Hotels including: Drama and country house charm during a stay at Kilworth House in Leicestershire; Park House hotel and spa – a West Sussex gem; Rockliffe Hall hotel, golf and spa in County Durham;

If you liked this review then why not Pin It? 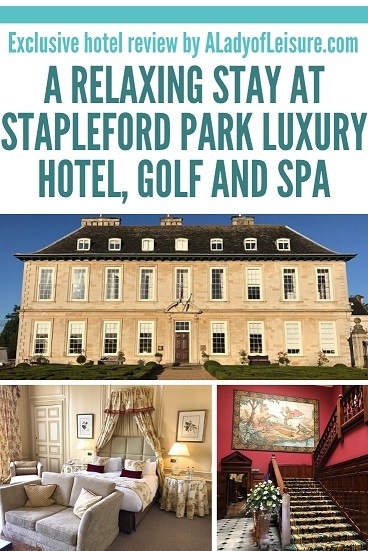