Is it a right or a privilege to be able to make tea in your hotel bedroom with your very own hotel kettle?

I once spent the night at luxury country house hotel Cliveden and had a meeting with the chief executive of Travelodge the following day. The subject of hotel kettles immediately came up. I told him that Cliveden, one of the finest hotels in the country, had a policy of not having tea or coffee-making facilities in their rooms. ‘We are a country house hotel, not a chain,’ the general manager had said when I’d asked her. 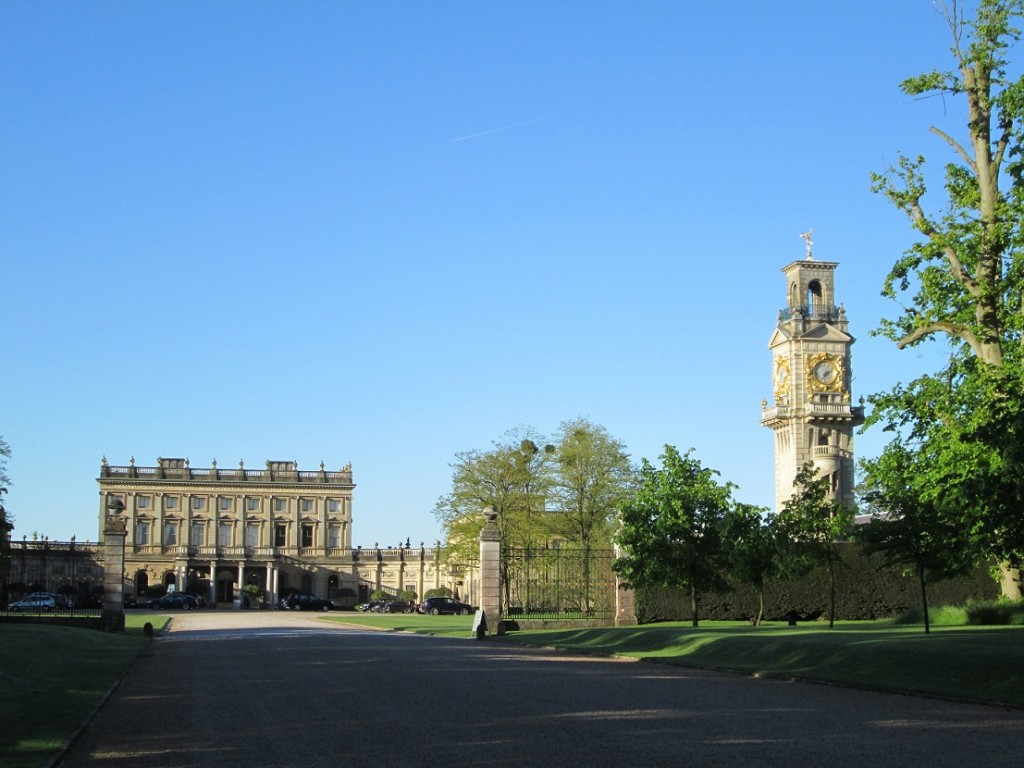 Cliveden – definitely not a hotel chain…

The Travelodge boss was appalled. ‘If we didn’t have hotel kettles in our rooms, there’d be riots,’ he said, and he probably wasn’t exaggerating.

Cliveden might argue that this proves their point. (Although there was a kettle waiting for us when we stayed in its very posh Prince of Wales suite, so I’m not sure how consistent its position is). 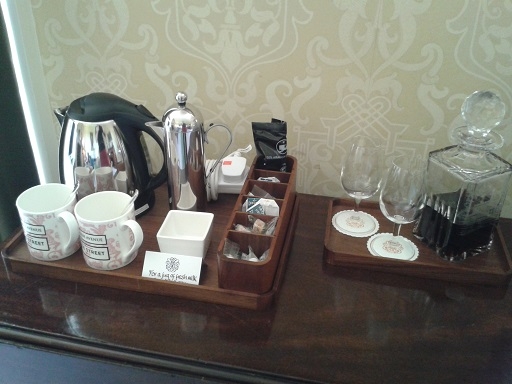 UK hotels vs US hotels – the hotel kettle debate

I had always thought that a kettle or an espresso machine such as the smart Nespresso makers were practically mandatory in British hotels and B&Bs. (If you go to America, however, it’s a completely different matter. The five star luxury hotel Bellagio in Las Vegas is one of the most famous  hotels in the world but its room don’t have kettles. They do have ice-making machines on every corridor though, which you wouldn’t get in a British hotel).

But I have stayed in several hotels recently which have very deliberately decided not to enable their guests to make their own hot drinks. They prefer to bring your coffee to your room, so you are treated more as a staying guest than a paying customer.

Thus Hartwell House, near Aylesbury in Buckinghamshire, has placed little notes in the rooms stating that there aren’t any coffee facilities but you only have to ring and a drink of your choice will be on its way to you. 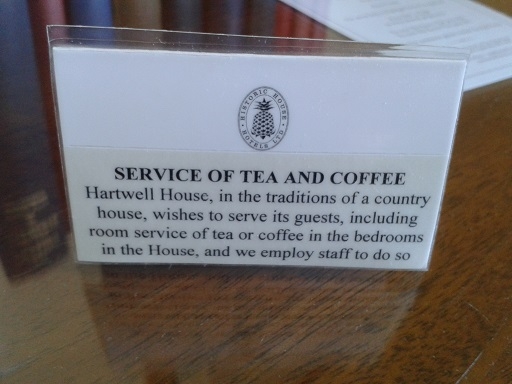 This note rather helpfully stopped me searching around for the kettle

Its sister hotel, Bodysgallen Hall near Llandudno, in North Wales, is the same. Which is all very well – my morning coffee was left in my room at Bodysgallen while I was in the bath, which felt very indulgent – but what if you’d like a cup of tea in the middle of the night, or before you’ve got dressed, without having to wait for someone to bring it to you? 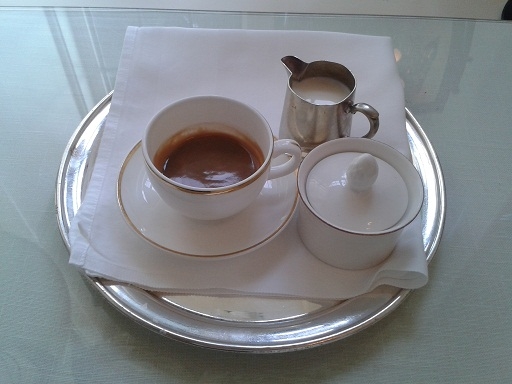 Then there is the sticky question of whether this service is included, or whether your cappuccino will appear on the bill as room service. I was brought a cup of coffee on arrival at Hambleton Hall (with some lovely biscuits) which was a nice treat, and as it had been offered there was no question of it being charged to our room. But other hotels are different – when I asked just for hot milk in a central London hotel they tried to charge me £2.50 for the privilege.  (I haven’t named them as they promise it was an error). 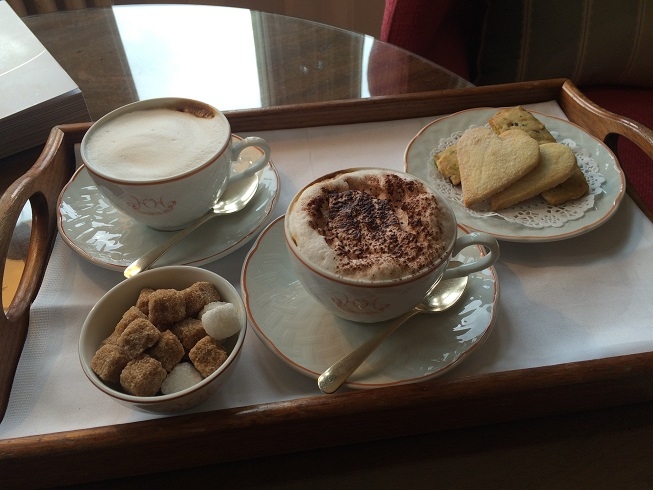 I think you can’t go wrong with a smart espresso machine and some fresh milk in the fridge, something The Pig hotels do really well. 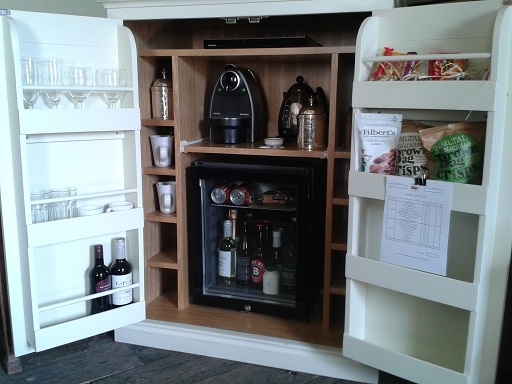 Some hotels like to have the kettle in plain view… 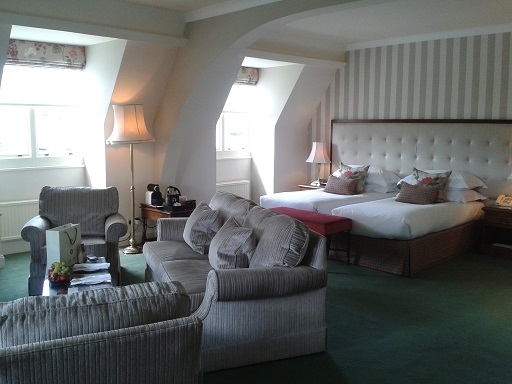 Others, like Gravetye Manor, tuck it away in a cupboard… 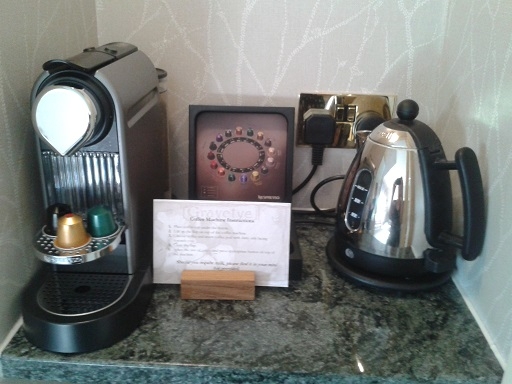 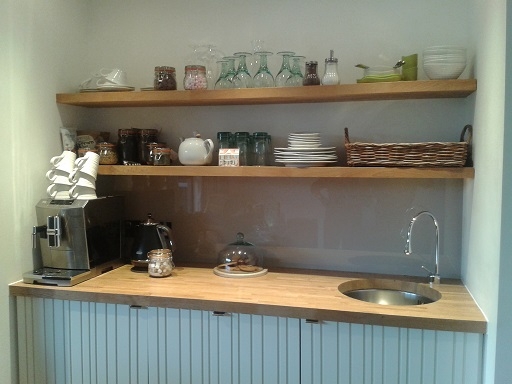 Hampton Manor had a very classy kettle (and apples) while Barnsley House‘s layout was very neat and stylish, with cups and fresh milk in the cupboard beneath. 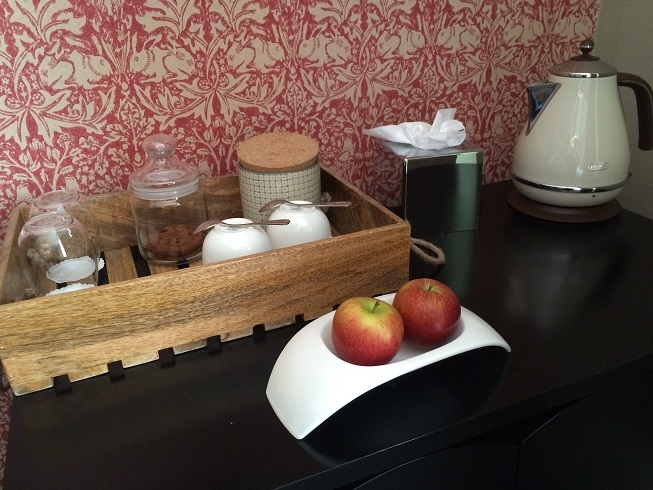 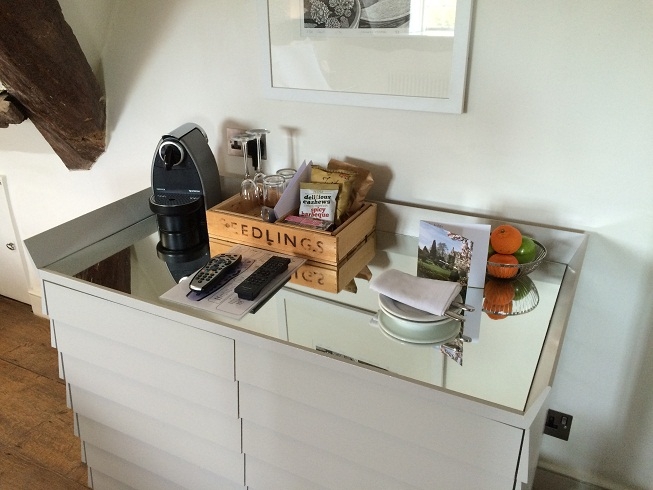 Coffee and crisps at Barnsley House

Full marks must go to two very different hotels – ME London and Laura Ashley’s hotel, The Manor House, in Elstree. Both have gone for the ‘just give them everything’ approach. 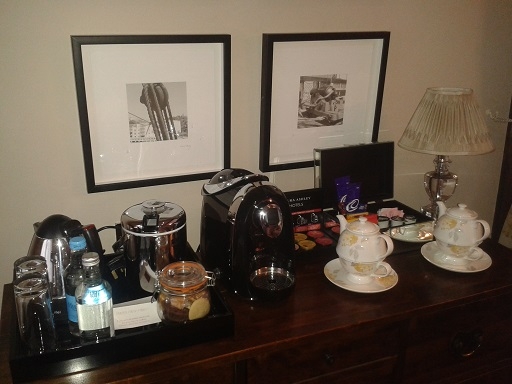 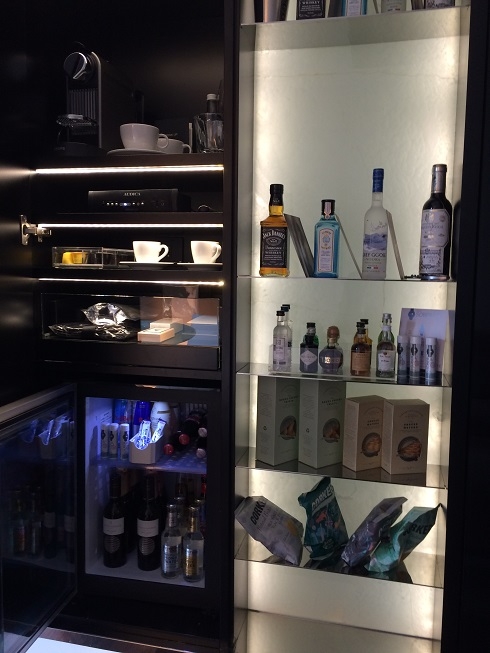 Espresso machine, coffee cups of varying sizes, fresh milk tubes in the fridge at ME London – it’s enough to make you forget the cocktails altogether

So what do you do? Is a kettle and a packet of UHT enough? Are you more of a ‘Nespresso and fresh milk in the mini-bar’ person? Or is it far nicer to be treated like a member of the aristocracy and brought a hot drink of your choice to your room?

And please let me know where you think the best equipped rooms for tea and coffee-making are!

If you enjoyed this hotel about hotel kettles and whether they are vital in any luxury hotel room then you’ll like:

Turn-downs, coat hangers and posh loo seats – what I think is essential in a luxury hotel room

What’s wrong with having a photobombing yellow car?

One thought on “Are hotel kettles essential in your luxury hotel bedroom?”