There are some places that are so lovely you can’t stop thinking about them after you leave, and Gravetye Manor West Sussex is most definitely one of those.

[Note: this review of Gravetye Manor West Sussex was first published in 2015 and some of the details might be out of date – visit A luxurious foodie stay at Gravetye Manor, a West Sussex gem for the latest review]

It probably helped that I visited this luxury country house hotel – which is undoubtedly one of the best country house hotels in West Sussex, despite stiff competition – during one of the most glorious weekends of the summer, so even though I arrived all hot and bothered after three hours crawling along the M25, a mere five minutes later I was feeling wonderfully soothed and relaxed thanks to being at the stunning gardens at Gravetye (the gin and tonic probably helped too). 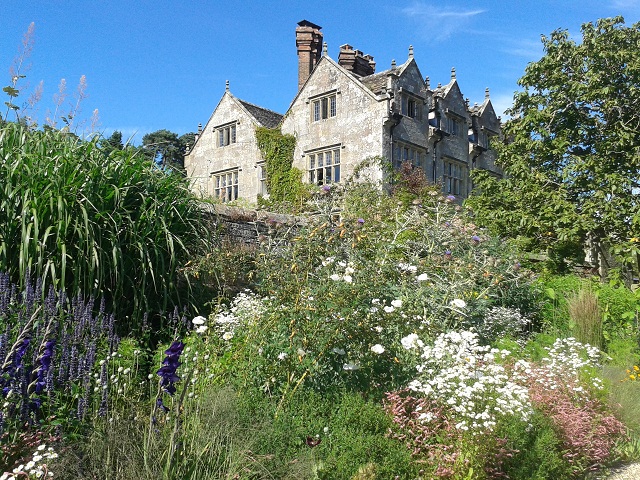 The gardens at Gravetye Manor are stunning and justifiably renowned: a riot of different colour and sizes and far removed from the formality of grander establishments. There are some tables on the main lawn but we – my mother was my lucky plus one for the stay – were shown to a lovely table round the side of the manor, in a beautiful courtyard overlooking a wild flower meadow beyond which was a sparkling lake. 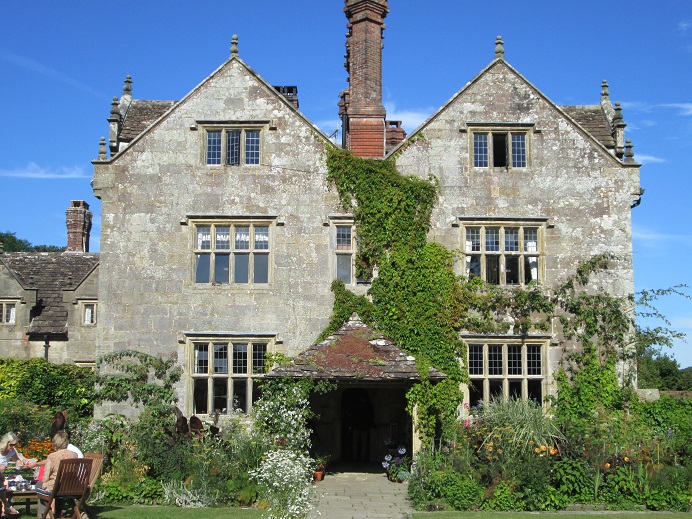 Dining in the gardens at Gravetye Manor

With the traffic delay I had worried I would be too late for lunch but no, at Gravetye Manor food – as well as being served in the new Michelin-starred restaurant at Gravetye – is served in the gardens or lounge from 10am until 10pm which is extremely civilised, especially for a Sunday in the middle of the West Sussex countryside. The menu wasn’t just a ‘light bite’ option either but top-quality British food, from wild cress and nettle risotto to salad of seared pigeon breast. I had dressed south coast crab followed by the fish of the day, pollock, with summer garden vegetables and they were both as wonderful as the view.

To book directly with the hotel, go to: Gravetye Manor
To read more reviews and get the latest prices click here to go to Gravetye Manor on TripAdvisor 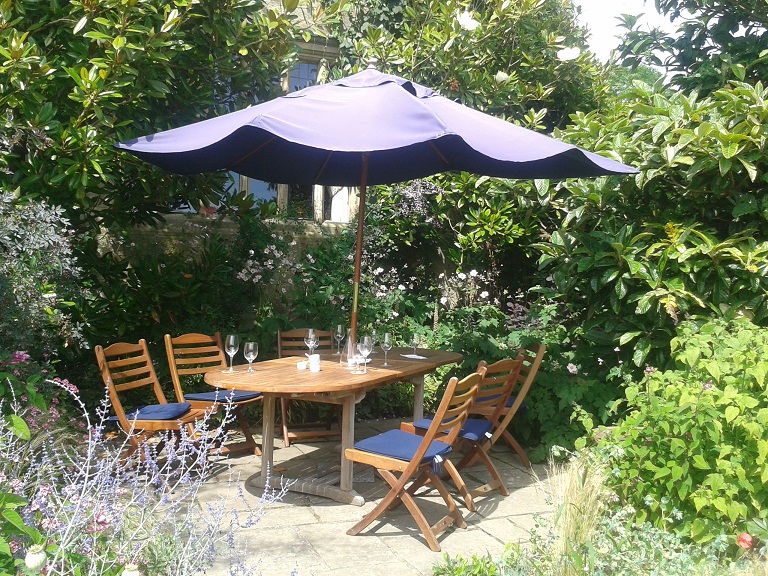 There are little tables and chairs dotted around the gardens 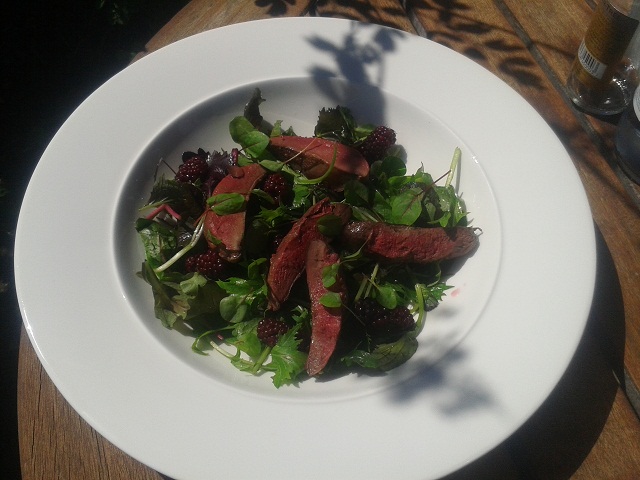 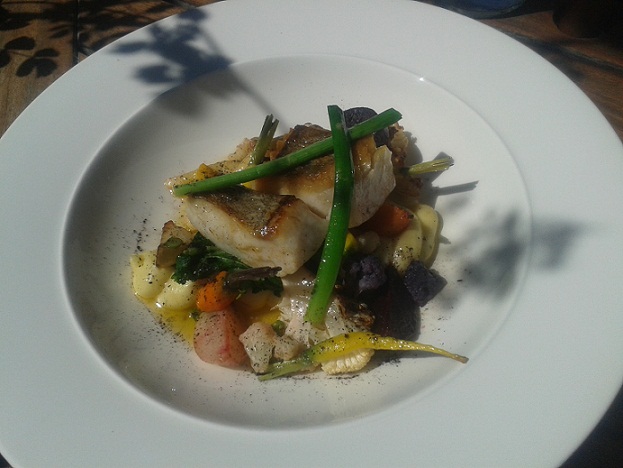 Fish of the day with summer garden vegetables

We had been the only ones in our garden glade for a few hours but the other tables – all at a good discrete distance apart, tucked under the trees – were starting to fill up as people spilled outside for post-lunch coffees (there was a very formal party who were all wearing black tie and cocktail dresses) or arrived for afternoon tea.

Checking out the bedrooms at Gravetye Manor

It was time to check out our room at the top of the manor and it was vast, with a fabulous view over the gardens, large bathroom, desk, sofas and a perfect window seat on which to have a post-lunch snooze.

While Gravetye Manor is a beautiful building and fast building a reputation as one of the best hotels in the country – recent accolades include best independent hotel of the year from Caterer magazine, AA hotel of the year, and Conde Nast’s best countryside hotel – the atmosphere is still very relaxed and informal.

It has a classic country house feel where you are left alone to wander at will, to curl up with a book in a snug corner, to play croquet on its immaculate croquet lawn, to amble around the kitchen gardens, down to the lake or have a drink at its cosy and well-stocked bar. Staff are there but invisible, so it genuinely feels like a grand old house and you can almost convince yourself that you actually live there.

Built in 1598 by local landowner Richard Infield for his bride, Katherine, Gravetye’s origins as a notable garden site were – literally – sown in 1884 when world-famous gardener William Robinson bought it and the 1,000 acres which surrounds Gravetye. Robinson was known as the creator of the classic English garden, where the idea was to enhance the natural beauty of woods and gardens rather than forcing or controlling them into more formal styles. 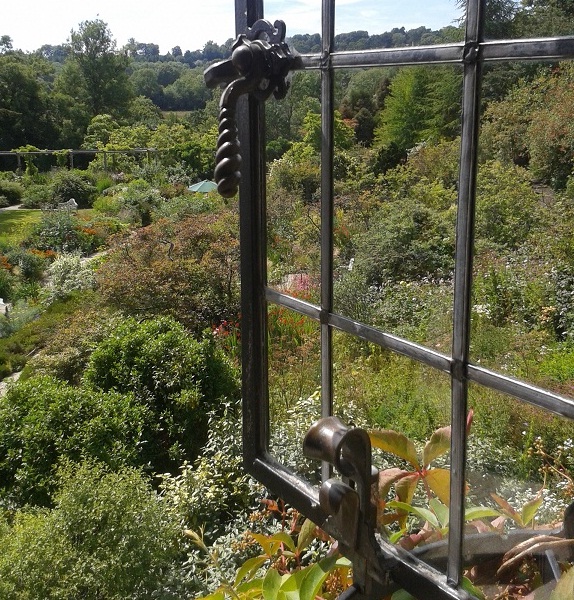 The beautiful view of Gravetye’s gardens from our bedroom window 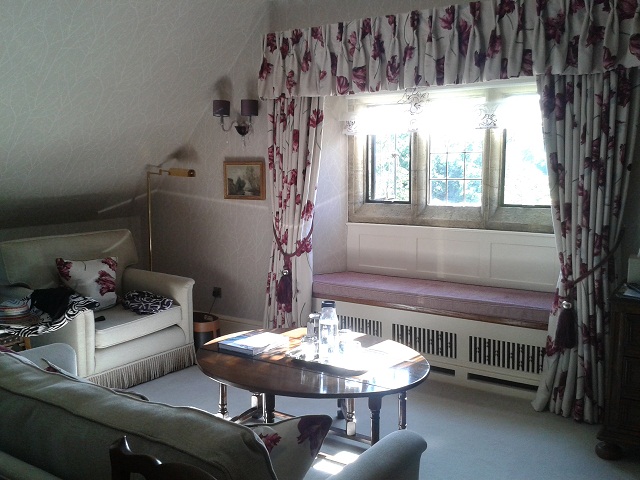 Peter Herbert, who bought Gravetye in 1958, established it as a top hotel, but after his retirement the hotel’s new owners struggled to keep it afloat, and it went into administration in 2010. Thankfully after its rescue and a £2.5 million refurbishment by its new owners, Elizabeth and Jeremy Hoskings, Gravetye is very much back to its best, a fact very much in evidence at its stunning evening meal. 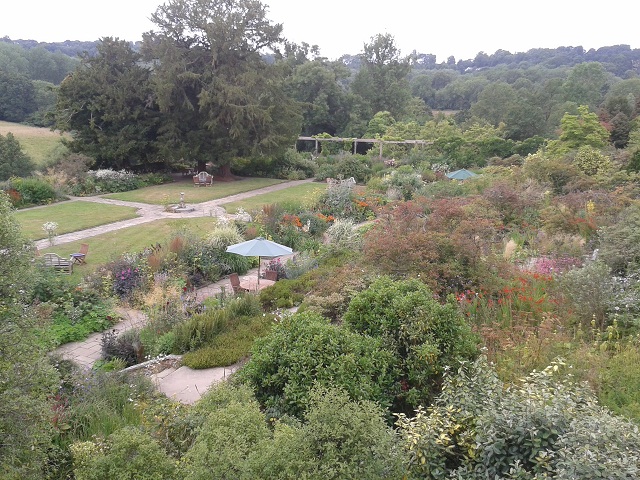 Our food experience at Gravetye Manor

With only one wrong note – the flaked Dorset cock crab which was hidden underneath a bed of crisps and a very strange green cucumber jelly disc – the food was superb, from the canapes to the amuse-bouche watercress soup, to the hand-dived Orkney scallops with miso glaze. The main courses of Cornish turbot with black rice and girolle mushrooms and herb-crusted saddle of lamb with roasted garlic and haggis were really special, and rarely has a cheese trolley been so expertly and enthusiastically explained as by our fabulous waiter James, who hasn’t been at Gravetye Manor for long but who’s destined to go far. 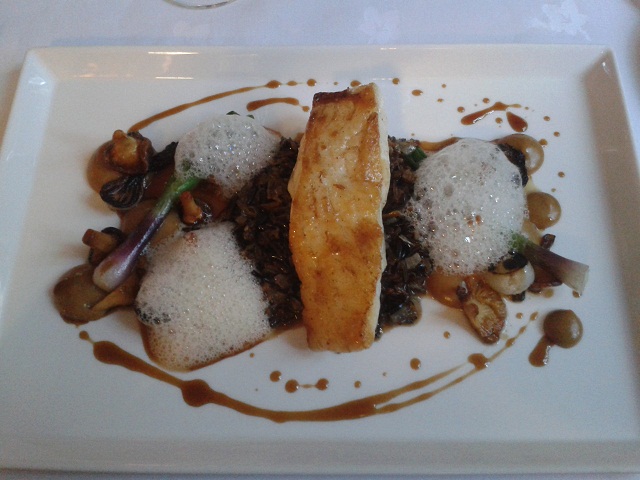 The food at dinner was beautifully presented, such as my Cornish turbot with girolle mushrooms

With 95 per cent of all the fruit and vegetables coming from Gravetye’s one-acre walled kitchen garden, the food could hardly be more local, and after a superb breakfast the next morning (poached eggs and award-winning black pudding, no less) we had a lovely walk around the grounds with Tom Coward, the head gardener who clearly knows his onions (and flowers and fruits and….).

He’s been responsible for the gardens for the last five years, working closely with the head chef to decide what goes into the kitchen gardens and greenhouses, and managing the tricky job of preserving William Robinson’s vision while also taking it forward for the years to come. 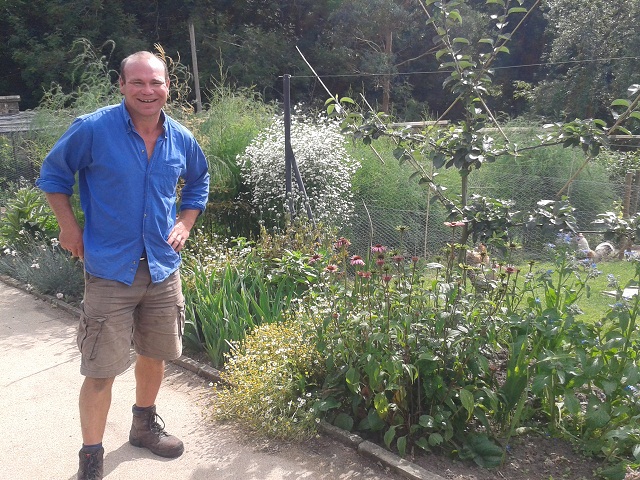 We bid a reluctant farewell to Gravetye, waved off by the very smart and debonair managing director Andrew Thomason, and headed off to the local delights of Wakehurst, Kew Garden’s country estate and local vineyard Ridgeview. However we will most certainly be back, but until then I will have to content myself with telling everyone I know about this gem in the English countryside.

Gravetye Manor is a member of Pride of Britain Hotels, Relais & Chateaux and has three AA rosettes.

Throughout the year there are many events at Gravetye Manor including garden tours with Tom Coward, wine-tastings and a Guy Fawkes evening with dinner and fireworks. For special offers at Gravetye Manor and last minute deals contact the hotel directly.

Hotel information and how to book Gravetye Manor

Gravetye Manor is a member of the Pride of Britain Hotels chain, which is a collection of 50 of some of the best hotels in Britain. Pride of Britain is currently offering an all-inclusive two-night Renew at Gravetye break. Priced from £1,288 per room/£644 pp (two sharing) it includes daily full English breakfast, alfresco lunch, cream tea and dinner. Spend time exploring the hotel’s 1,000 acres which include a stunning wildflower meadow, two-acre walled vegetable garden and an orchard with 32 varieties of apple. Contact Pride of Britain Hotels on 0800 089 3929 (www.prideofbritainhotels.com). For alternative booking options try:

Other member hotels from the Pride of Britain Hotels group reviewed by ALadyofLeisure.com include: The Headland hotel, Cornwall: luxury in the heart of Newquay; A relaxing stay at Stapleford Park hotel, golf and spa, Leicestershire; Park House hotel and spa, a West Sussex secret (but not for much longer)

If you want to read more reviews of luxury hotels with Michelin-starred restaurants then check out my reviews of: Whatley Manor hotel and spa: one of the best hotels in the Cotswolds; Hambleton Hall, Rutland: a food-lovers delight; Maison Talbooth, a perfect Essex stay; Hampton Manor, West Midlands: Michelin-star luxury; Lucknam Park near Bath: my very own Palladium mansion for the night