South Lodge hotel and spa in West Sussex near Horsham is a great destination hotel. With a huge, modern spa, two restaurants, a bar, acres of lush grounds to explore, a terrace for cocktails or afternoon tea, vast luxury bedrooms and even its own wine-tasting cellar, guests at South Lodge hotel are unlikely to want to leave.

A stay at South Lodge hotel spa in West Sussex

The 88-bedroom South Lodge hotel itself was built in 1883 by Frederick Du Cane Godman (who inherited a fortune through a family connection to the Whitbread brewing company) but the modern luxury spa is only a few years old and at 44,000 sq ft is full of everything you could ask for for a truely relaxing and pampering spa weekend. (Incidentally the house itself, which was sold to Exclusive Hotels in 1985 by Frederick Godman’s heirs, has a fascinating history which can be read here https://www.aahorsham.co.uk/content/southlodge)

The luxury spa at South Lodge hotel is in a separate building to the rest of the hotel (just a few steps away from a side door, although staff will happily run you there from the main entranance in a golf buggy). Once you’ve checked in and put your things in the very smart changing rooms, you could almost find yourself overwhelmed by choice. There’s a 22 metre indoor pool surrounded by luxurious loungers, there’s a sauna, a herbal steam room and a marble-lined salt steam room (my favourite).

The terrace outside the spa restaurant Botanica, plus the hydrotherapy pool just behind, and the main hotel building in the background

There’s the option of trying out the popular activity of wild swimming in the outdoor pool but for those who like a little warmth with their swimming, there’s a large heated outdoor hydrotherapy pool too.

The natural pool at South Lodge hotel and spa

A host of sun loungers overlooking the grassy lawns sloping around from the rear of the hotel are popular in the summer months but with a host of wellness treatments, a gym, a spinning studio and fitness classes you won’t be stuck for things to do if the weather turns poor.

The great thing about the spa is that you could tell that a lot of thought had gone into all aspects of the spa experience. One changing room might be much like another but there had been a lot of thought put into the ones at South Lodge: not only were they very smart and modern, but there were added touches such as hair-straighteners, art-deco-style lighting, tonnes of fluffy towels and names for all the lockers which made it feel more personal.

Tempting as it was to remain in the spa until dinner and then dine in the spa restaurant in our fluffy robes, such attire is only allowed until 6pm and so we duly headed back to our room to dress in a more civilised fashion for the evening meal.

Our corner room on the first floor, was huge and with its two King-sized beds reminded me of hotel bedrooms in Las Vegas. I wasn’t a huge fan of the brick effect on some of the walls but we weren’t lacking for amenities: as well as a large TV and a desk, various chairs, bedside tables, lamps, wardrobes, lots of plug points, complimentary water a kettle and coffee machine, there was an in-room iPad for all your hotel stay needs.

Our bedroom at South Lodge was vast, with two King-sized beds and a large bathroom

You could choose extra pillows, pick a time for your turndown service and, we discovered later, read the morning newspapers (I prefer to have one delivered to my room but there was a good selection to choose from at breakfast the following day). It was strange not to have a fridge either in a hotel of this size and quality but one can be requested and when we phoned down for fresh milk it arrived in a matter of minutes.

The family bathroom had twin sinks, a smart tiled shower, a bath with its own TV, and the whole room set-up seemed very luxurious with its massive windows and acreage of carpet. There were some nice unique touches too including plenty of complimentary water, a master switch for lighting next to both beds, a notice next to an empty vase saying please do pick some wildflowers on the estate to decorate your room, plus Minty, the room’s fluffy lamb.

We headed back to the spa restaurant courtesy of Mike from reception who ferried us there in one of South Lodge’s golf buggies. The spa restaurant is called Botanica and is a large, airy space over the spa itself. (There is also a more formal restaurant, The Pass, in the main hotel which hosts guest chefs and is more of a ‘special occasion blow-out’ kind of place.)

The spa restaurant where we ate dinner was called Botantica and was light, airy and modern, with a great cocktail selection and wide choice of locally-sourced food

The menu at Botanica was tiny in font but large in ambition, with a great range of healthy food

The menu at Botantica – which for some reason is done in a minute font – looked quirky and appealing with sections of Small Plates, Large Plates, Sharing Plates plus snacks and desserts, and had a healthy bias with lots of fish, vegetables and vegetarian options. There was obviously a lot of original thought which had gone into the menu and my only criticism of it was that it could be been more informative.

One item was merely described a ‘Wasted’ burger and chips which meant nothing to us until we asked our waitress about it and discovered it was made from left-over carrots and beetroots from a local supplier, with chips made from potato trimmings. This was a great idea and one which could have been highlighted in the menu (not least to make it clear that this was a vegan burger – the tiny PB meaning ‘plant-based’ could have easily been overlooked).

Information about where the meat, fish and vegetables came from would be have been great too as it felt like the suppliers were probably local and organic but it would have been nice to know.

One aspect not lacking in information was the cocktail menu which was so entertaining written that we couldn’t resist trying a couple – a hefty Bloody Mary which makes my mouth water just thinking about it – and a white lime and seaweed margarita, both excellent.

For dinner itself we decided to push the boat out and go straight for the sharing plate of 26oz rib of beef with charred tenderstem broccoli, horseradish gremolata and rocket. We filled in the 20 minutes waiting time by scoffing two bowls of excellent olives and had worked up quite an appetite when it did appear.

Our impressive main course – a 26oz rib of beef with charred tenderstem broccoli, horseradish gremolata and rocket. The horseradish and chips were particularly good

It was certainly a memorable and tasty dish and the accompanying horseradish and chips were delicious.

Breakfast was served in a charming room which overlooked the gardens and had a different, more modern style to the more traditional bar and lounge. There was a large choice of cereals, pastries, fresh fruits and compotes, plus some extremely nice blended fruit juices and smoothies. There was a selection of heated breakfast items such as bacon, eggs, tomatoes and sausages but as we weren’t pushed for time we opted for Eggs Benedict and Eggs Florentine, both of which arrived promptly and were excellent.

After breakfast there was just enough time for a tour of the hotel. South Lodge is really rather large, as befits a hotel which once hosted the G20 summit, with a massive conference centre at one end – which doesn’t impact on the guest experience at all – and lots of differently-furnished rooms such as a Drawing Room perfect for afternoon tea, a Lounge and the Billiard Bar which served coffee during the day and cocktails at night.

The Drawing Room at South Lodge was ideal for afternoon tea whatever the weather, with a real log fire and plenty of comfy sofas

The unique cellar at South Lodge which we discovered by accident – the hotel holds events here but you can also hold your own wine-tasting here with a card from reception. Perfect for a rainy day!

There were also little hidden treats such as a wine-tasting cellar where you could sample wines by the glass, splash or sip. This was tucked away downstairs and South Lodge not only holds events here but all guests can use it at their leisure just by getting a card at reception, but which annoyingly isn’t mentioned on check-in – we would loved to have tried some of the wines in our own personal wine-tasting. Hotels don’t want to bombard guests with information the moment they check in but a quick run-through of the highlights would be nice. Hotels should show off what makes them unique!

There are many different styles of bedroom at South Lodge including Naomi, a charming and cosy room right up in the eaves

Some of the bedrooms at South Lodge hotel were unexpectedly lovely too and more individual than corporate – we particularly loved Naomi, a romantic little bolt hole tucked away in the eaves. For such a large hotel, the attentiveness of the staff was especially good – during our stay Mike also found us a couple of  toothpaste and toothbrush sets as we’d left ours behind – and there was always someone on hand to assist. I’d say a stay at South Lodge hotel would be a great experience whatever the weather or the time of year – or you could always book yourself in for two stays – one winter, one summer – and compare the two experiences. Now that would really be an indulgence.

Hotel information and how to book South Lodge hotel and spa

Did you like this review? Then why not Pin It? 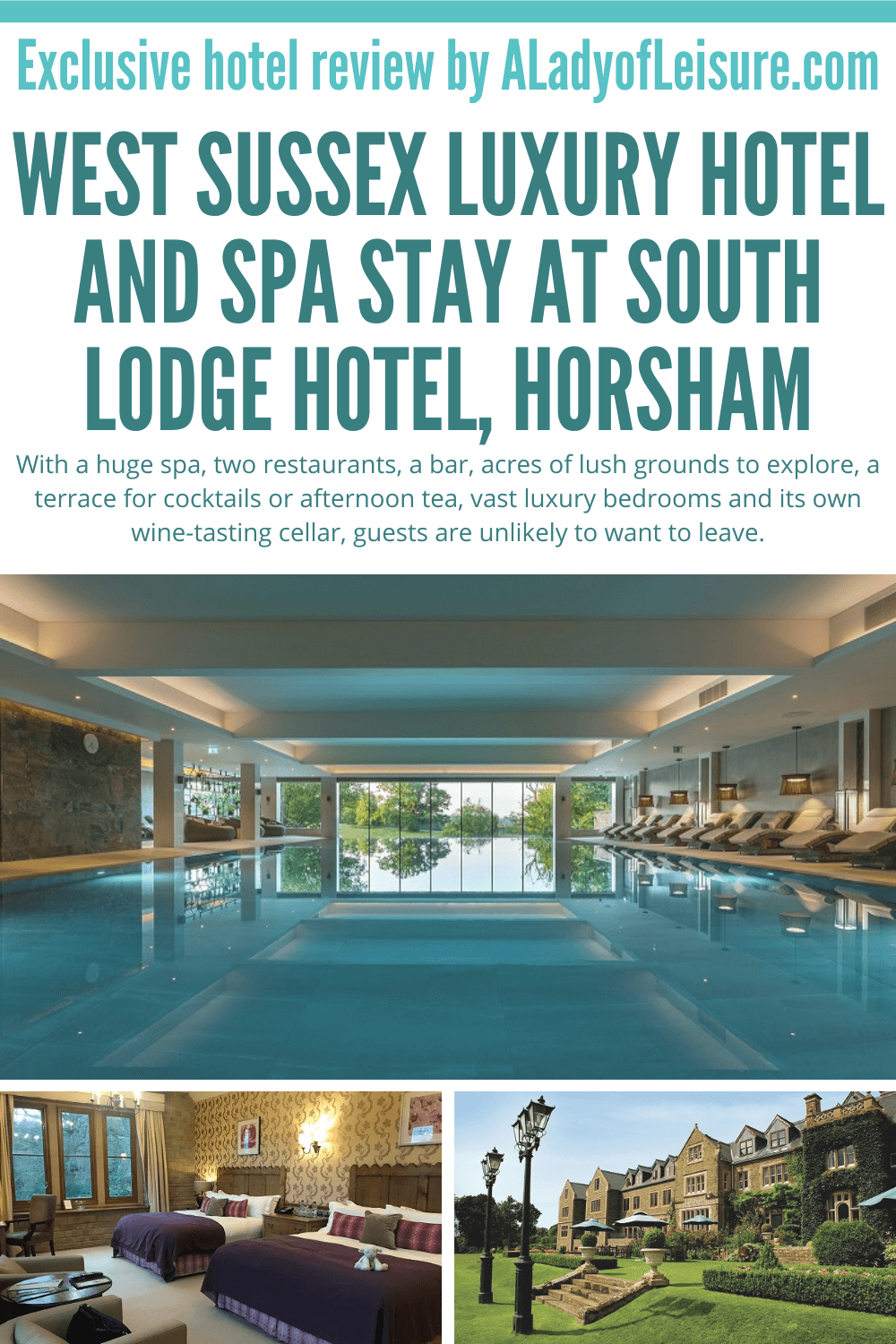