They’ve both received glowing reviews and are two of the hottest places on London’s restaurant scene at the moment, but Kitty Fisher’s and Ham Yard restaurant are rather different culinary experiences.

[Note: this review of top London restaurants Kitty Fisher’s and Ham Yard hotel restaurant was first published in 2015 and some details might now be out of date]

It could be a size thing: Kitty Fisher’s restaurant in Shepherd Market is tiny, just six tables upstairs and not much larger downstairs, which gives it a cosy, intimate feel. Ham Yard hotel restaurant in Covent Garden in contrast is vast: acres of dining space, dozens of banquettes and tables of all sizes. A massive bar stretches the length of one room, there are high ceilings, pillars, mirrors and lights everywhere and it is a riot of bright colours and activity.

Kitty Fisher’s, named after an 18th century courtesan, is tucked away in a corner of Shepherd Market in Mayfair

Both restaurants have celebrity connections: Kitty Fisher’s is part-owned by actor Oliver Milburn and entrepreneur Tom Mullion, whose wife Emily Sheffield is David Cameron’s sister-in-law (the Camerons have been, as has Nigella Lawson). Ham Yard is also where the celebrities hang out, including the Fox acting dynasty who partied there after the opening night of Dear Lupin, and Adele who recently held her 27th birthday party there. 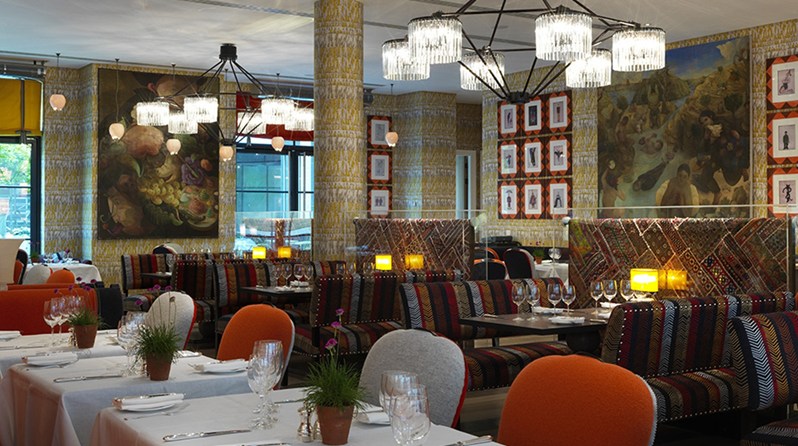 Ham Yard restaurant, next to Ham Yard Hotel, is a vast, vibrant and colourful affair

Due to Kitty Fisher’s size and success I was told it would be nigh-on impossible to get a table, but in the quiet days of August it didn’t seem to be a problem, although the guy on the reservations line said we had to choose between eating at 12pm or 2pm. This wasn’t ideal: midday seemed way too early but 2pm too late, and it’s never great feeling having to watch the clock when you eat, but I opted for 12 and even turned up ten minutes early to get maximum dining time. However I was politely but firmly turned away. 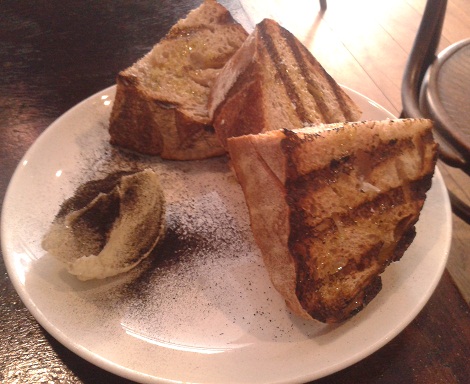 ‘We haven’t opened yet,’ said Mr Milburn himself, so I wandered around Shepherd Market in the sun for a while instead. Given the choice of the two non-ideal times it was then slightly annoying to find we were the only diners in the entire restaurant until 1pm, at which point various other groups arrived, sitting either downstairs or at the front of the restaurant (and to their credit they didn’t try and sweep us out on the dot of 2pm).

However the atmosphere was friendly, there was some very pleasant music plinking away in the background and rather than being a celebrity front for the restaurant Mr Milburn was extremely hands on, bringing us food, clearing away plates or prowling around the bar manning the phone. 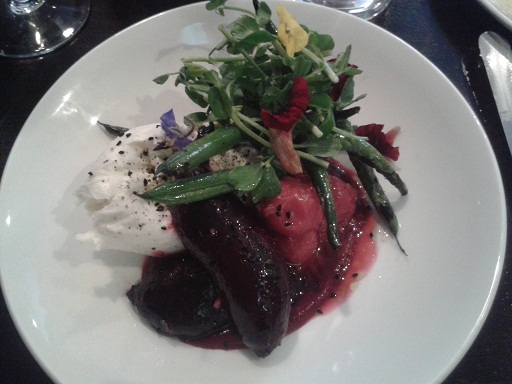 The burrata starter looked good but could have been gloopier

The menu was pleasantly short and simple, and the opening bread with burnt onion butter was delicious, soft and very rippable. I am a massive fan of burrata cheese so felt rather let down by my burrata, beetroot and gooseberry starter: it looked pretty but the burrata itself was a little too stiff and stodgy, instead of the soft, creamy, gloopy mess it should be. My fellow diner Simon was much happier with his taleggio, London honey, summer truffle and mustard which sounded like a great combination of ingredients.

I was more successful with my second course, a beautifully cooked lemon sole with salsa verde, and Simon’s lamb cutlets were declared ‘delicious’, as were our desserts: summer fruit and buttermilk rice-pudding and strawberries and clotted cream ice-cream.

With two glasses each of the very nice Picpoul the bill was £86.50 (not including service) which is very reasonable for a lunch in Mayfair: had we gone for its famous £80 Galician beef sirloin, which the critics have been raving about, the bill would have been rather heftier.

In spite of being much much larger, Ham Yard also had something against us eating at 1pm, but allowed us to dine at 12.45pm instead. Again, it wasn’t clear why, as there were plenty of tables free at 12.45, 1pm, 1.30pm and in fact it was only around 2.30pm ish that the place got quite busy, which says something about Soho and its offbeat hours. (As we got up to leave at 3pm I bumped into a friend who had that minute arrived for lunch which was expected to last the rest of the day). 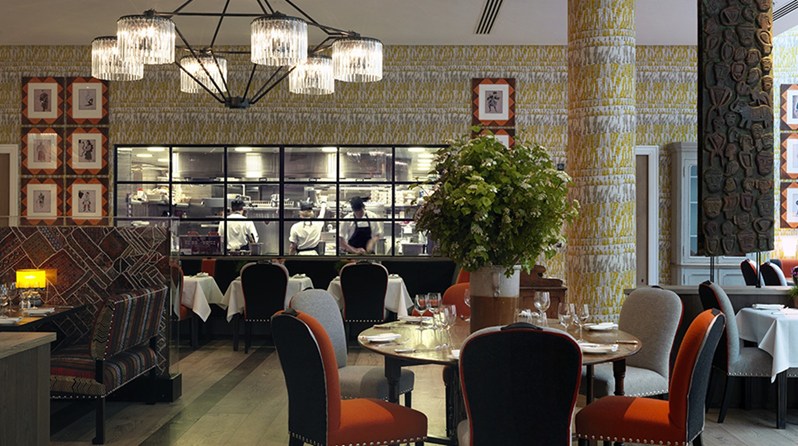 Being busy and bright (but thankfully not loud), the atmosphere was very different from the cosy calm of Kitty Fisher’s, but it had the air of ‘the place to be’ and there was a lot of head-swivvling as people checked out the other diners. The menu had seven starters, ranging from £6-£10, and seven mains from between £14 and £19 – there was also an aged on the bone sirloin at £28. 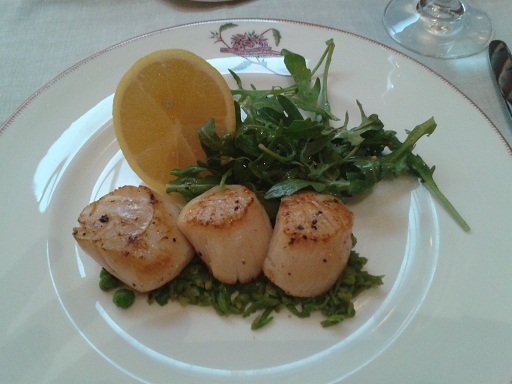 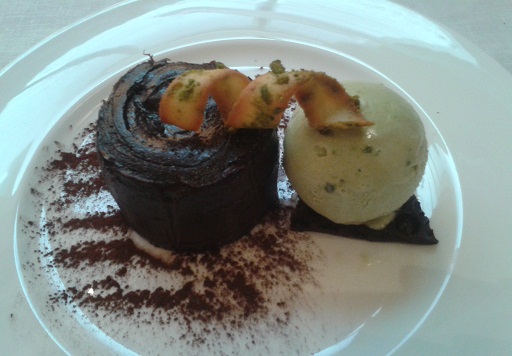 My seared scallops with crushed peas and a mint was nice if not very hot, and I was tempted by the braised shoulder of lamb but went for the poached cod with herb risotto and pancetta instead which was very tasty indeed. The sweetcorn soup and roast chicken chosen by my dining companion were given the nod of approval too. We couldn’t resist the chocolate fondant with pistachio ice-cream but I’m glad
we shared – it was gorgeously rich and and dark and very indulgent. The bill was just under £80 without service.

It all made for a hearty lunch but I was just able to stagger downstairs to check out Ham Yard Hotel’s famous underground bowling alley, which did look very cool and great fun.

I think a return visit to both is needed and for more than just a workday lunch – both Ham Yard and Kitty Fisher’s seem like the perfect places for very long, and very indulgent dinners.