Sexy Fish, the £15 million restaurant from Richard Caring (The Ivy, Le Caprice, J Sheekey) doesn’t actually look very sexy from the outside. It’s rather plain and square and dull and looks not dissimilar from the NatWest bank it used to be, plonked on the bottom corner of Berkeley Square. If it weren’t for the fact that SEXY FISH is in massive letters on the front then I would probably have walked right past it. ‘Somebody spent £15 million on this?’ I thought – and then I walked in. 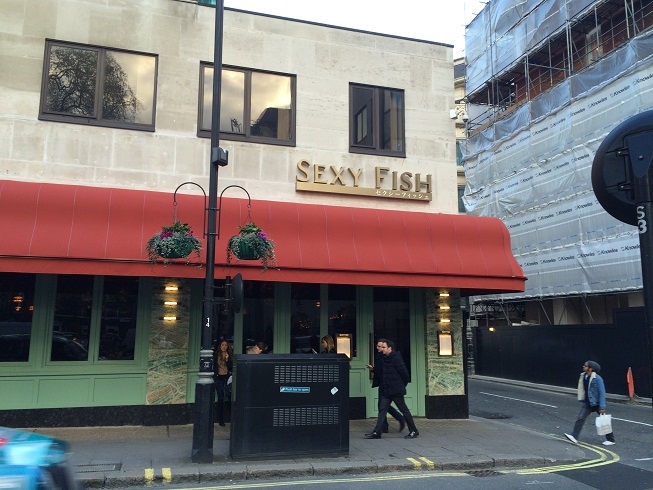 Not very sexy from the outside…

Sexy Fish from the inside

What a contrast. Being inside Sexy Fish is like no other restaurant I’ve been in for some time, if not ever.

It is not subtle.

It is like being inside a jewellery box, a Las Vegas casino and an Arabian palace all in one (it has been memorably described as ‘like being punched in the face by Abu Dhabi’).

There’s a waterfall running the entire length of the wall behind the bar to give that all-important indoor monsoon effect. There are 20 luminous floating Frank Gehry fish flying around at one end of the room and a 13ft crocodile, also by Gehry, climbing the wall at the other end. 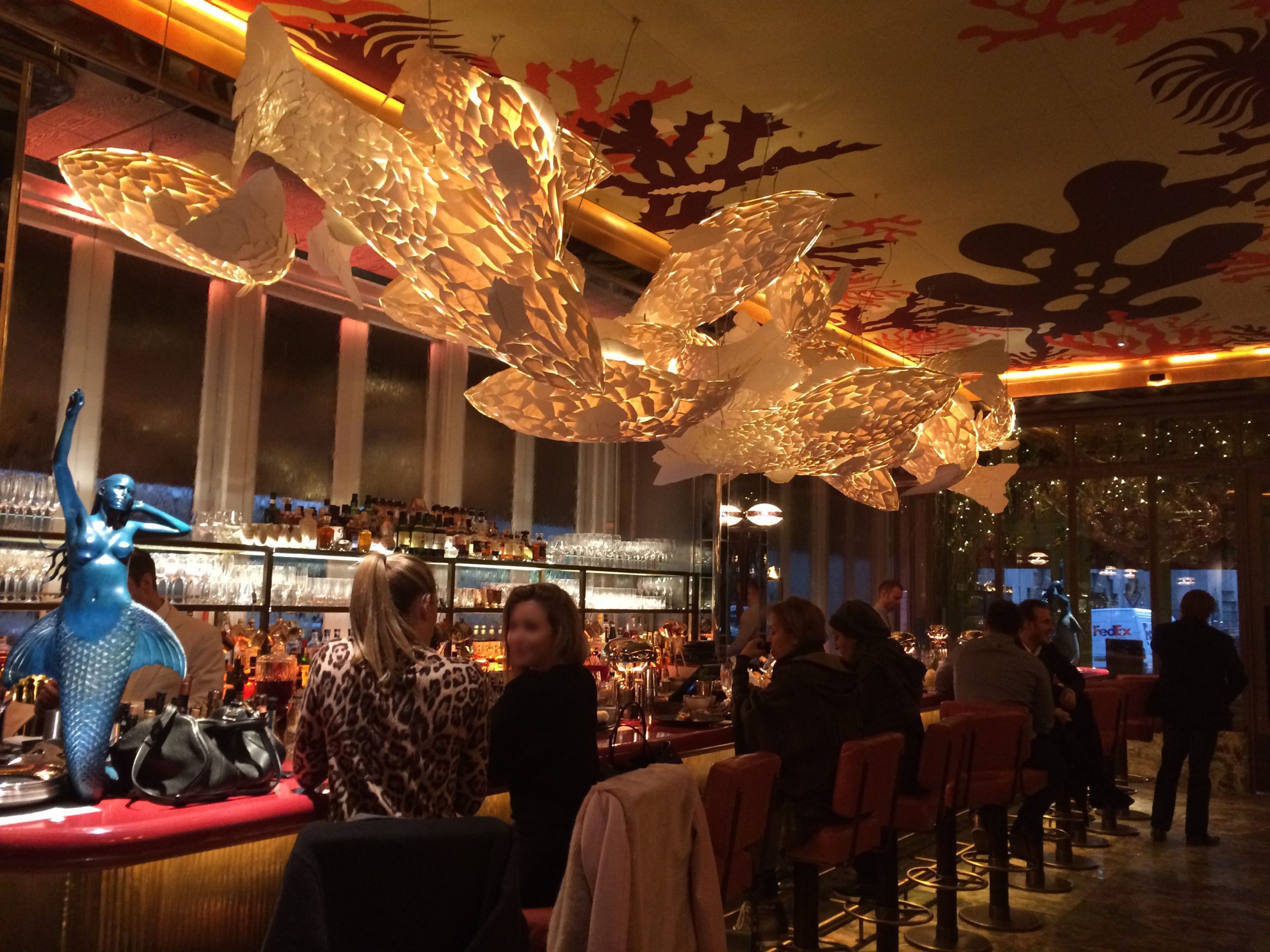 … however it certainly looked different from the inside

The bar is book-ended by Damien Hirst mermaids and the ceiling is like a Liberty print on acid. Even the floor has been sexed-up, being made of ‘rare Esmeralda Oynx marble from Iran’, whatever that is.

But the main impression was of people absolutely everywhere. Nearby Piccadilly seemed deserted by comparison. There were people drinking cocktails at the bar, endless tables packed with diners (Sexy Fish seats around 190) and umpteen waiting staff whizzing around. On arrival, my first thought was ‘So, this is where everyone is…!’ 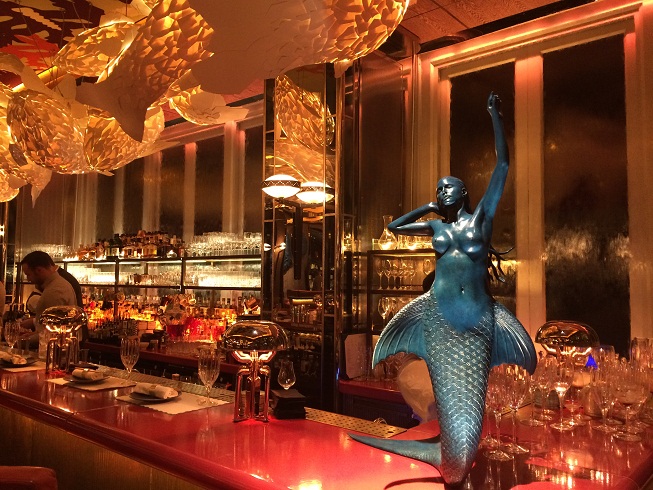 A favourite with celebrities

Since launching it has become a celebrity hangout to rival the Chiltern Firehouse, with the likes of Prince Harry, David Beckham, Matt Damon, Joan Collins, Amal Clooney, David Walliams, Kate Moss and Elle Macpherson all being seen in these gaudy surrounds. However at 2pm on a drab Wednesday afternoon, there didn’t seen to be any droppable-names around.

Instead there were wealthy ‘ladies who lunch’, exhausted shoppers laden with bags from Victoria’s Secret, besuited businessmen getting tanked up for the afternoon and family groups out celebrating: the main thing diners had in common was that they all sported designer labels and a lot of expensive jewellery, which at least matched the decor. Even though it was pretty hectic inside, the welcome was very good: the entrance doors were flung open by smart doormen before I’d even reached the door, I was greeted and seated straightaway and my coat was whisked away.

The food wasn’t cheap but it was very good and it arrived super-promptly from the open kitchen the other side of the room, spirited straight to our table the moment it was ready by a succession of extremely efficient staff, including the very friendly and helpful Fabio. He guided us through the massive menu and even suggested at one point that ‘we’d ordered enough’ which was refreshing to hear. 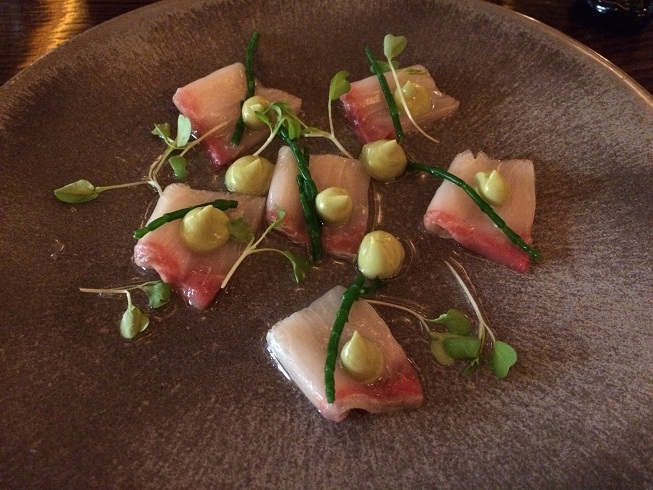 We started with the sashimi yellowtail (all dishes were to share) which was small but beautifully formed, with a real jalapeno kick to the blobs of avocado , and then sticky, juicy beef rib skewers arrived with horseradish creme fraiche to offset the earthy meatiness. 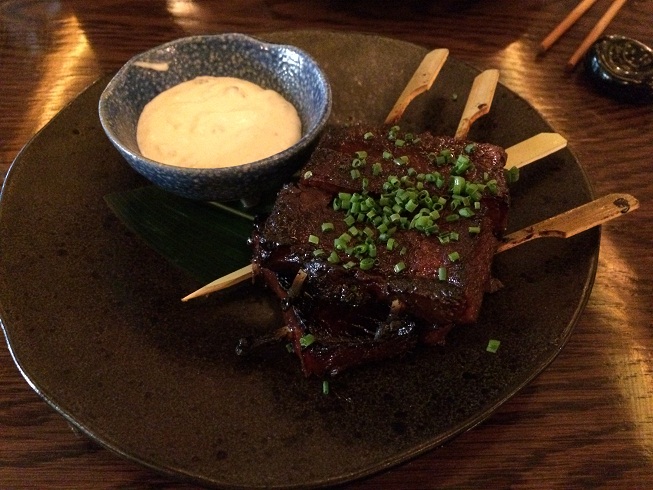 The selection of salads looked good but we jumped straight down the menu to the hot dishes – prawn gyoza which were tasty but a bit flabby for my liking – and Isle of Mull scallops which were fat and succulent (if pretty pricey at £7.50 per scallop). I hadn’t expected much from the bowl of noodles which we’d ordered almost as an afterthought, but they were really terrific and I almost forgot the etiquette of sharing (ie don’t scoff the whole lot). 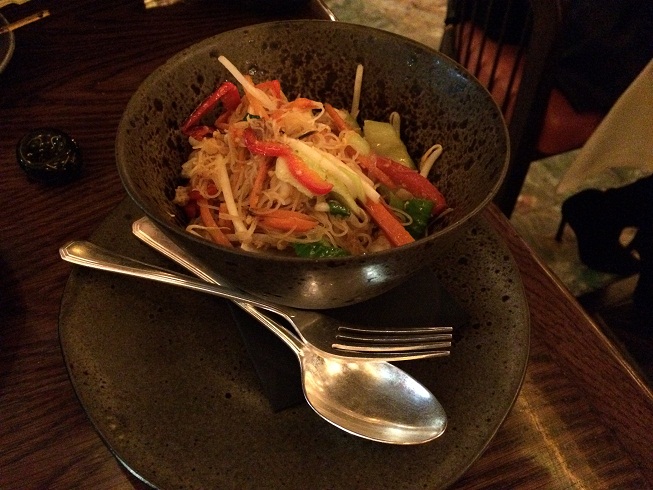 Some rather delicious noodles 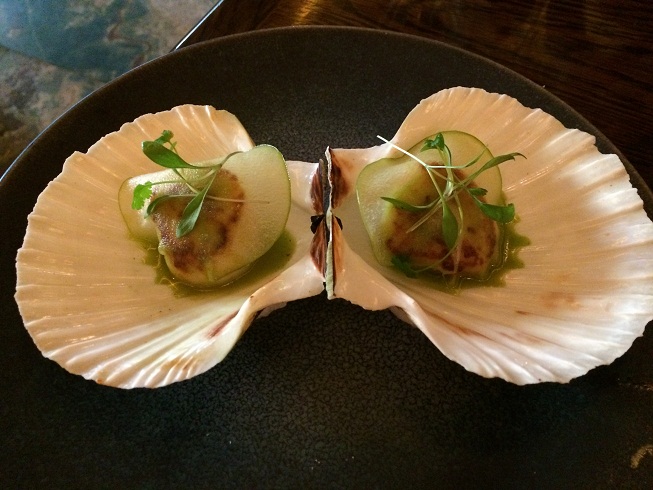 Scallops – nice but rather pricey at £7.50 each

The Madagascan prawns looked very theatrical but didn’t do much for me – the highlight for both of us had to be the miso-glazed Chilean sea bass which was plump and sweet and perfectly cooked, and bore more than a passing resemblance to Nobu’s signature miso-marinated black cod.

An air of opulence throughout

Too full (but not uncomfortably so) for dessert, we had ‘pebble petit fours’ which, like all Sexy Fish’s dishes looked great and were a lovely combination of light crispy shell and gloopy inside. Even the coffee was top quality, meaning we had about 10 espressos between us as we couldn’t stop drinking it. However restraint is certainly not something you’ll find much of in Sexy Fish. Even the loos were opulent, decked out in marble with fish-head taps, and there’s an aquarium downstairs in the private dining room. 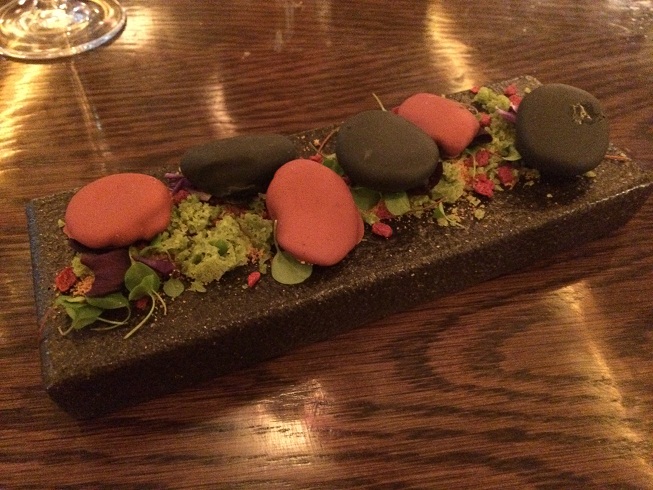 As evening began to fall, the floating fish hovering over the bar glowed even more brightly. Berkeley Square seemed utterly drab by comparison.

If you like reading reviews of great London restaurants then check these out: Dinner by Heston Blumenthal: meat fruit and dry ice; Noble Rot wine bar and restaurant on Lamb’s Conduit Street; Lunch at top restaurants Kitty Fisher’s and Ham Yard Hotel;