As a late arrival to the cult of the Pisco sour cocktail I certainly plan to make up for lost time. I started and finished my evening at London Peruvian restaurant Senor Ceviche with a perfect Pisco Sour, the drink which has become one of my favourites: little glasses of the Peruvian pisco spirit, mixed with lime juice, sugar syrup and bitters, refreshing and sour and sweet and smooth all at the same time, and extremely moreish. 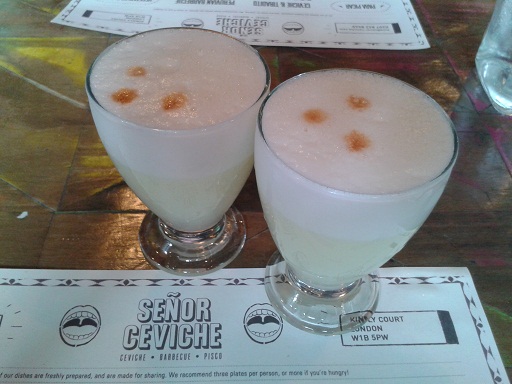 Even without those to top and tail the evening, our trip to Senor Ceviche would still have been a great night. One of the friendliest restaurants in Soho, the food was fresh and zesty, the service prompt and friendly, and the atmosphere was fun without being forced.

If you’re looking for restaurants near Carnaby Street then Senor Ceviche is a great find and a worthy addition to the hidden pocket of food-and-cocktail heaven which is Kingly Court. Located between Regents Street and Carnaby Street, this area is finally discovering the zing and zip which it had in the 60s and lost in the 80s.

The interior is cheerful, bright and stands out from the usual restaurant design

Senor Ceviche owner Harry Edmeades, who learned his craft working in restaurants in Peru, has re-created the colourful chaos of a Lima bar for London foodies with its busy yellow decor. 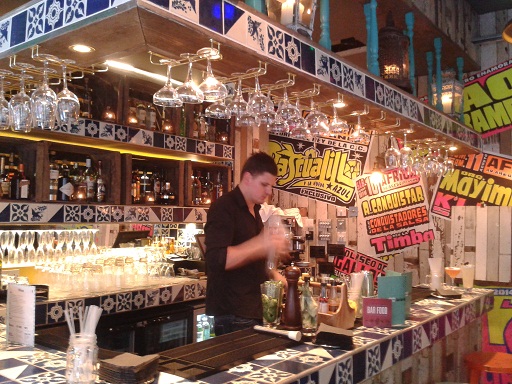 The bartender works his magic…

Thankfully the menu itself is simple, clear and unintimidating (although it might be improved by making it clear which dishes are small and which are larger, as by the time our waitress had pointed out the different sizes and explained each dish we had totally forgotten).

Senor Ceviche recommends you pick three dishes – which are all for sharing – per person, and they’ll come as soon as they’re ready. First to arrive were the fish dishes: Mr Miyagi salmon tiradito with pomegranate and tiger’s milk (a marinade made with chillis and lime juice), and the signature dish Senor Ceviche, sea bream with avocado and baby squid. 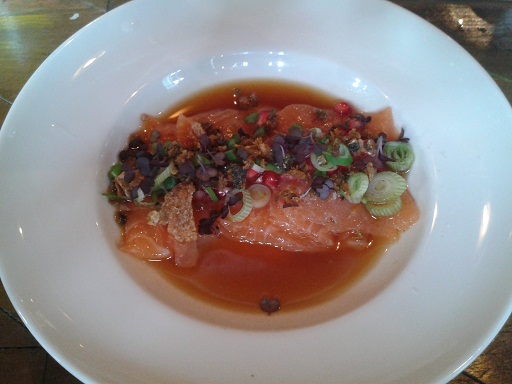 Both were deliciously tasty and, along with the Cusco Quinoa salad with edamame beans and crumbly cheese, were our stand-out favourites of the night.

We also enjoyed the marinated Super Chicken and the Pachamanca Pork Rib which was sticky and meaty, and I really liked the flat iron beef skewers Anticuchos. The ingredients were very fresh, well-sourced and well-thought out too, with little touches such as the crispy salmon skin adding texture and taste to the salmon, and the chocio corn giving crunch to the quinoa salad.

The drinks were great too: as well as the pisco sours we tried Senor’s Frozen Sour which was a refreshing if unexpectedly large drink (again, it would be helpful to indicate how big or small the drinks were on the cocktail menu) and the beautiful-looking (and tasting) martini glasses of Barranco Babe (pisco and passion fruit) and Uncle Pastuzo (pisco and aperol). 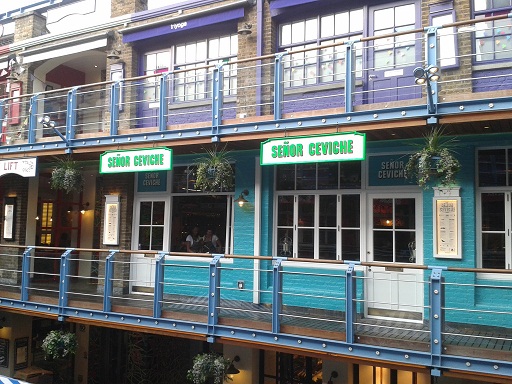 Senor Ceviche is above the bustle of Kingly Court

By the end of the meal we’d tried a lot of dishes but due to the sharing plates and healthy ingredients we didn’t feel over-full (and possibly more intelligent due to all the fish we’d eaten). Senor Ceviche would be a great restaurant for solo diners – people can eat along the bar overlooking the kitchen as well as at the tables – and if you haven’t got time or room for a full meal, then the bar would be perfect for a quick drink or two after work. Make mine a pisco sour…

How to find Señor Ceviche