The traffic-and-commuter-saturated High Holborn usually has little to recommend it, being full of gridlocked buses and office workers doing the twice-daily rat run to and from the tube. But an grand oasis of opulent charm and fine dining has just arrived and is well worth putting off the journey home for.

A meal at Holborn Dining Room

Holborn Dining Room is located in the old Pearl Assurance building, so it has all the high-ceiling’d formal grandeur of a former financial institution complete with marbled pillars. It is part of the opulent Rosewood London hotel which is just behind it, and the two compliment each other beautifully. 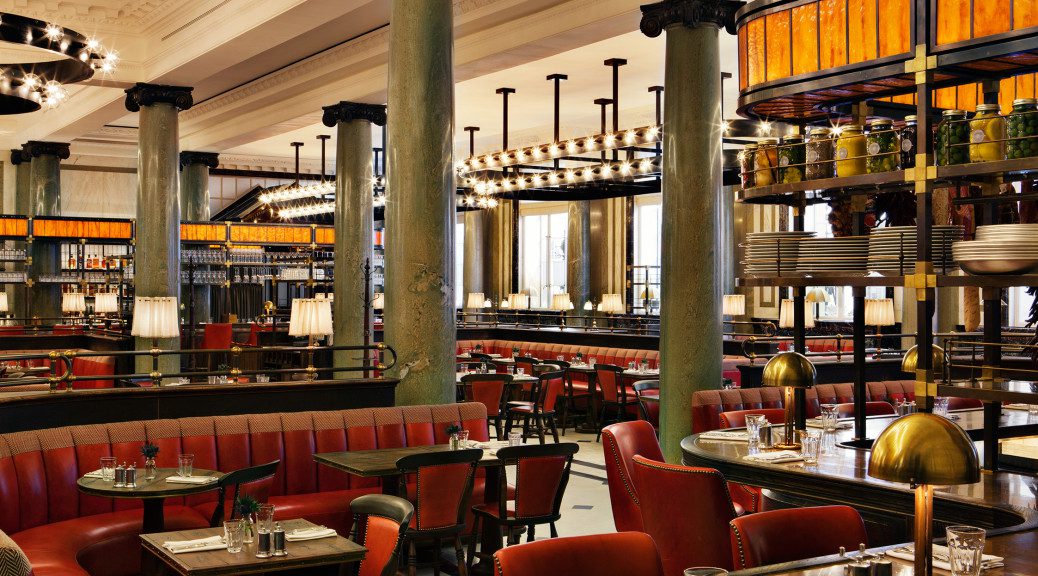 An improvement on an insurer’s offices, the building on High Holborn is 100 years old this year

In the far corner is the Holborn Delicatessen, open during the day for coffee, pastries and high-end deliciousnesses, while in the restaurant itself is a deli-style counter complete with hanging salamis and people busily slicing away at hunks of cured meat.

The main restaurant was decked out in a grand Belle Epoque style (at a reported cost of £2 million) with red banquets, white tiled floor and lamps absolutely everywhere.

The welcome was charming, rather than formal – I was greeted by head maitre d’ and industry stalwart Jon Spiteri, formerly of Quo Vadis, looking fabulously cheerful in a bright yellow checked suit. He whisked away my coat and suggested that a glass of champagne at the bar while I waited for my dining companion to arrive would kick the evening off nicely. 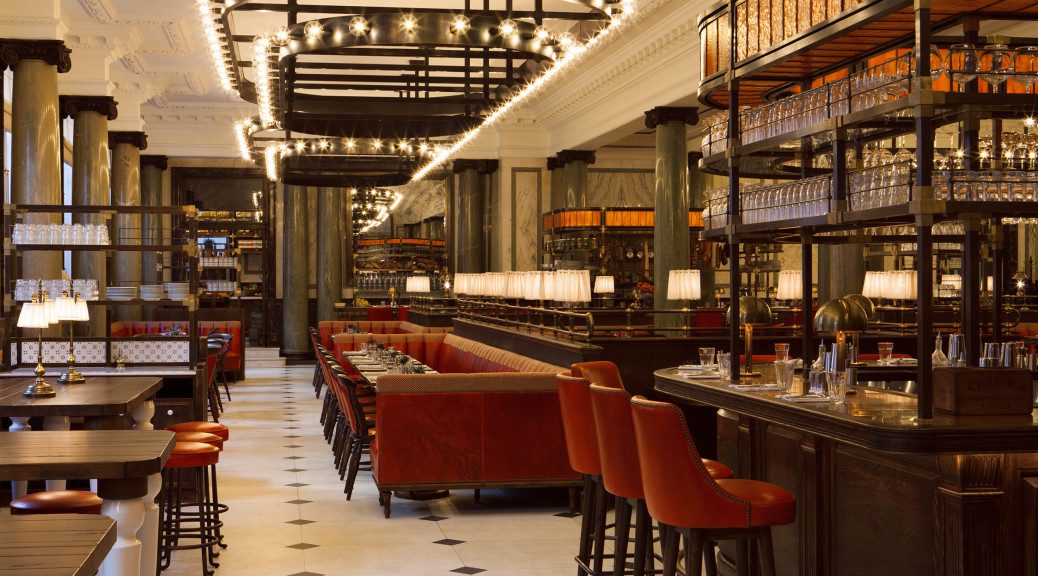 The entrance to the restaurant. The bar is on the right, while the delicatessen is straight ahead

I obediently perched at the bar but suddenly came over all undecided over what to have, so I ordered a half of Camden Gentleman’s Wit wheat beer to drink while I dithered. The friendly barman helped by offering a decent taste of both the house champagne – Perrier-Jouet – and the English sparkling wine, bottled under the Holborn Dining Room label by the Gusbourne Estate in Kent, but after all that I instead opted for a cocktail, a Montecristo Daiquiri over ice, with tobacco-infused Havana rum, vanilla liqueur and lime juice.

My companion Nigel arrived and again had the same problem of choice, saying yes to champagne, whisky and half of the cocktail list, before landing on the Camden Town Treacle, again with Havana rum and this time with Harviestoun Old Engine Oil reduction, and fresh apple juice. However our indecision was quite enlightening as the barman was perfectly happy to decode the more esoteric items on the drinks list that no cocktail list seems to be without these days, including Absolute Elyx, Tonka-infused Stoli and byrrh.

The problem of choice only intensified once we had sat down at our table. The menu is divided into seven parts, ranging from charcuterie, cold counter and hot counter, to crustacea, hot kitchen, sides and afters. If you are a starter, main and pudding kind of person, these more free-ranging style of menu can be quite overwhelming, as you feel obliged to try something from every section, while knowing full well you will not be able to finish it. 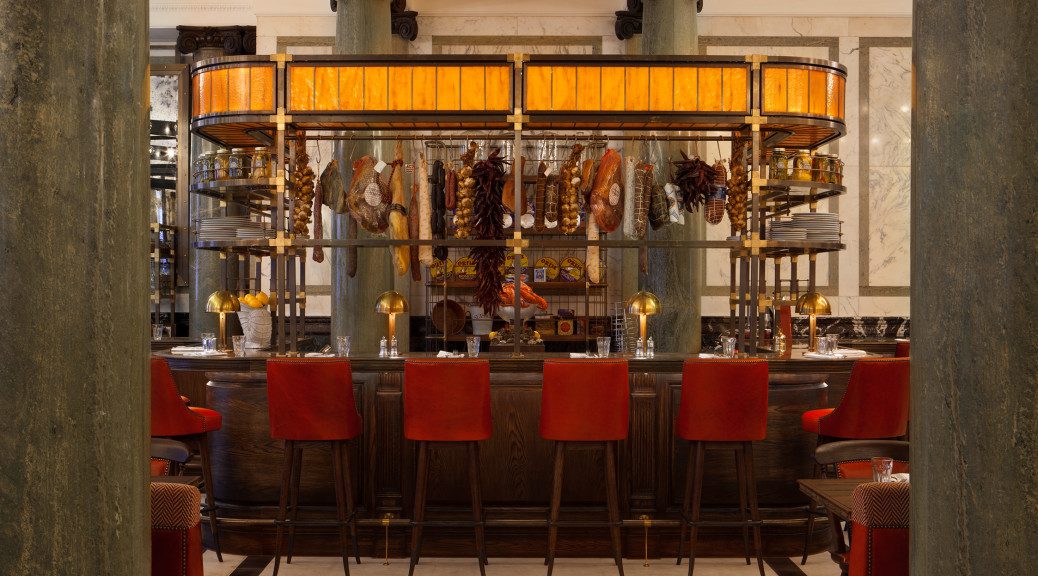 The deli counter – and a place to enjoy lunch, surrounded by – lunch!

Our technique was to order one course at a time and see how we did as we went along. There was so much to try out on the left hand page of the menu that it seemed a shame to just try one dish and then charge full steam ahead to the adjacent ‘hot kitchen’ section which had main course staples such as sirloin steak, lamb chops, lobster, ‘hock and coq’ pudding and mushroom risotto.

While these all sounded nice, it felt far more exciting to lurk around the earlier reaches of the menu, starting with ‘ancient loaf and Abernathy butter’ (£2.50) – it was fresh and moist and very nibbleable – and moving on to a fabulous British charcuterie board (£18.50).

This, explained our extremely friendly and knowledgeable waiter Adam, was all from an estate in Suffolk, including the wild boar salami (‘They’re not totally ‘wild’ wild, but they are roaming around,’ explained Adam helpfully), fennel salami and air-dried beef. 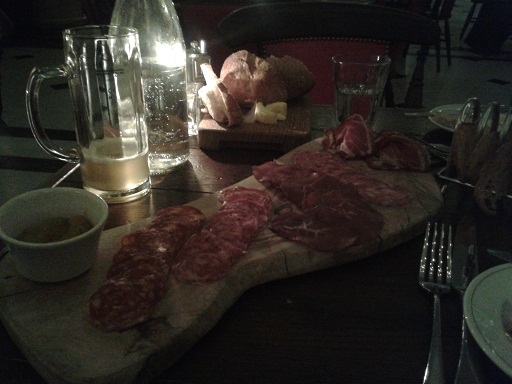 You might spot the difference between my pictures and the professionally-taken ones… anyway here’s the British charcuterie board. And some beer.

It was laid out on a board with a jar of piccalilli and was absolutely delicious, charcuterie to rival anything I ate when I lived in Italy. We totally inappropriately paired it with a couple of glasses of white wine, Nigel had a Spanish Alberino while I went for the really excellent house white, from Herault in Languedoc, but they actually went rather well together. The only niggle so far was that the table was tiny for two people with a thirst and a healthy appetite, but otherwise so far so good.

We marched on through to the ‘cold counter’ section, and while the Argyle smoked salmon and the pressed ham hock both sounded promising, we decided to return later for the steak tartare and the bottle of red which we’d ordered ages ago by now, having been side-tracked by the white wines, which were so good we had gone for a other round. 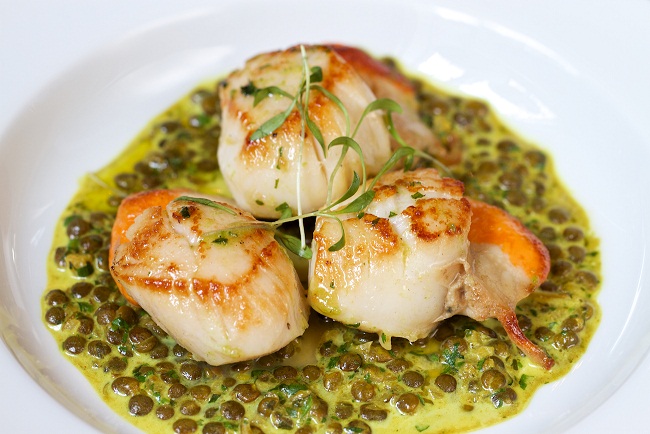 But what to chose from the ‘crustacea’ section? Another lengthy discussion ensued – I am never usually indecisive but was certainly making up for it now – before we went for the scallops ‘a la Plancha’, with spiced lentils. I couldn’t fault the dish, not that I would have wanted to, now several glasses of wine, beer, champagne and cocktails into the evening, but the scallops were done to perfection.

There was something about the surroundings that made you think ‘sod it, let’s really go to town’ which must have been the thinking behind the caviar dish which arrived next. I don’t think I’ve ever had caviar in a restaurant but after this, I am going to make a habit of it – it was superb and did a Tardis-like trick of looking quite small in its little tin on ice, but seemed to last for ages, slurped down with sour cream and millimetre-thin slices of French toast. 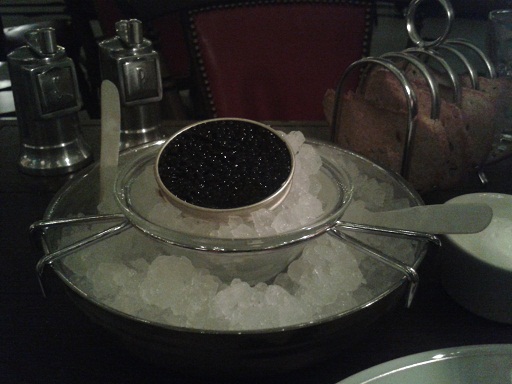 Adam popped by to tell us that it was actually Spanish caviar – so much for our idea that we should really be drinking vodka with it – and while it was a luxury at £26, it was certainly a memorable one.

By now the evening has turned into a glutton’s delight, so it was time for steak tartare (£19.75), a gigantic mound of raw minced steak with a raw egg simmering on top. Steak tartare can be a flat, molecule-thick wafer of meat or a much looser mince and this was definitely the latter, but was top quality and only made slightly too spicy by Nigel’s over-exuburent dashing of the Worcestershire sauce and Tabasco.

It arrived with a baby gem salad which had a really delicious dressing: no sooner had I asked Adam what might be in it than he dashed off to the kitchen, returning seconds later with the recipe, although done in industrial quantities, such as 30 kgs of shallots and so on.

‘You might want to reduce those quantities for home use,’ suggested Adam, before I made pints of the stuff. 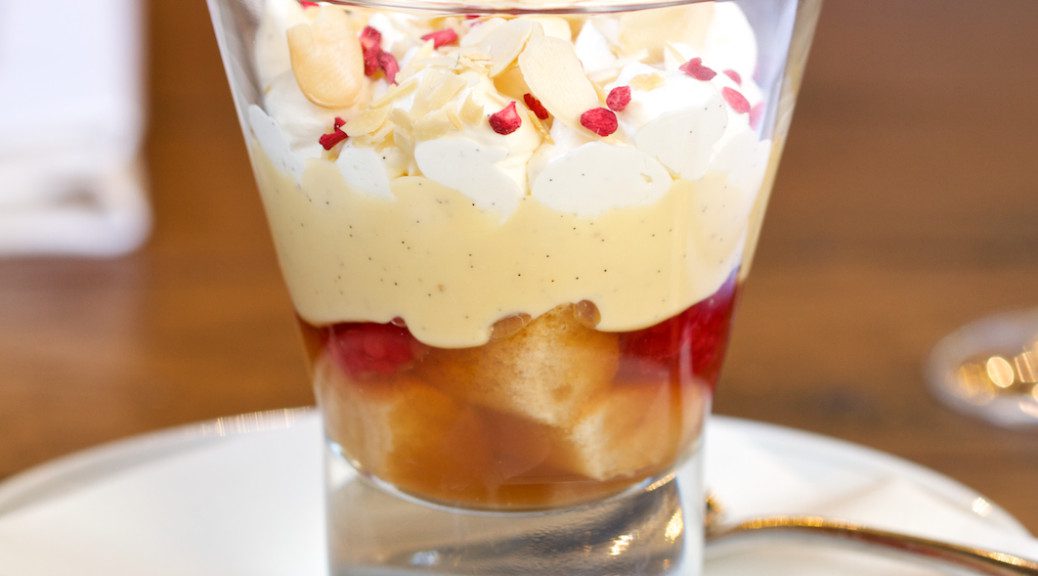 By now we were stuffed to the eyebrows with food and had to take time out to drink the red wine – a nice but over-warm Corbieres, which we had to chill in an ice bucket – while we enjoyed reading about, rather than tasting, the hot kitchen dishes. After a suitable pause to catch our breath though, we found that a minor miracle had occurred – we actually had room for dessert, mainly because Adam spoke so eloquently in their favour.

While Adam claimed you could barely taste the alcohol in the steamed treacle and whisky pudding, we found that you most certainly could, but that that was certainly no bad thing; it was potent and gloopy and all the things a very boozy pudding should be.

Again due to Adam’s advocacy, we also tried the baked rice pudding with blackberry jam – not something I would usually go for, but it was so creamy and smooth and tasty that just seconds after I had declared that I was ‘just going to taste it, as I was too full to eat anything else,’ I looked down and realised to my surprise that I’d inhaled the lot.

By now the place was almost empty – it was about 11pm on a Monday night, after all – and while there was no hovering waiters to suggest we should be on our way, we thought it was time we rolled off into the night. 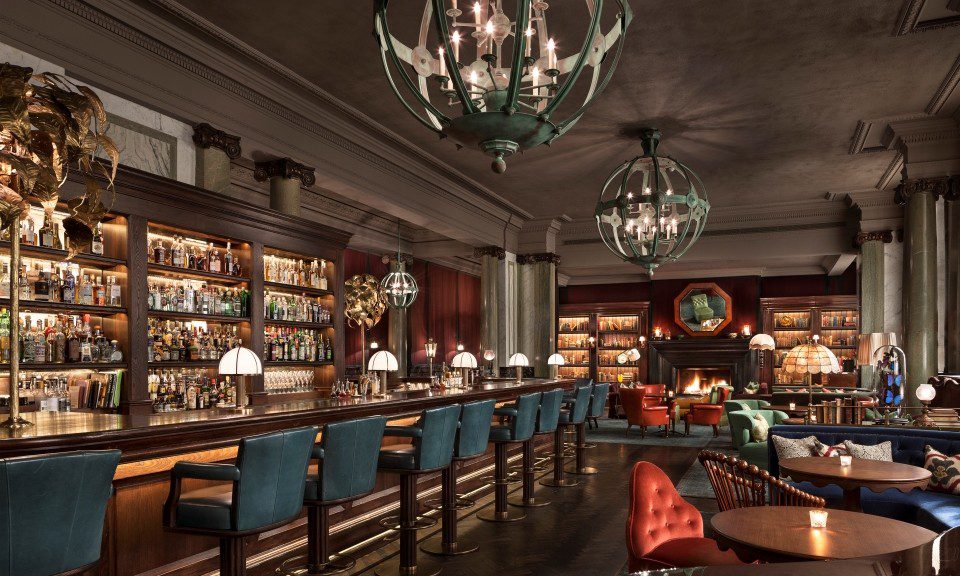 Scarfes bar at the Rosewood London

However up popped Adam again to show us around the rest of the Rosewood London, the adjoining hotel which used to be the Chancery Court and has just been wholly renovated. The courtyard itself will be a perfect quiet little haven of calm in the summertime, when the Holborn Dining Room will spill outside, and the mirrored dining room and decor of the hotel’s reception – with stacks of PG Wodehouse and Agatha Christie books, and sculptures made of dinky cars – made many other places with similar aspirations look dull and corporate.

We bid Adam and the team farewell and headed off into Holborn. Or not, as it turned out. The bar at the Rosewood, just metres from the Holborn Dinning Room, has also had a makeover, now calling itself Scarfes and decked out like a traditional oaked-lined library bar.

Just through the revolving door we could hear a superb jazz singer who was patting away at a drumkit with a brush and accompanied by a pianist sporting a remarkably dodgy haircut. So it was time for a nightcap – and more decisions, considering there were more than 80 gins and 200 whiskies on offer. Happy days.

If you like reading reviews of unique central London hotels then check out these ones: My stay at The Marylebone: a room with a view and a seriously nice roof terrace; Review of the Kensington luxury hotel in South Kensington; A cooling terrace (and a cocktail) at The Bloomsbury hotel London