To arrive at Langshott Manor is to jump back in time. One moment you are in urban Surrey, passing through towns like Redhill and Horley and driving though a modern housing estate, and then all of a sudden you arrive at a building unlike no other – with chimneys, mullioned windows, gables, a bell tower, patterned brickwork and basically looking as if it has come straight off the set of a film about the Tudors. 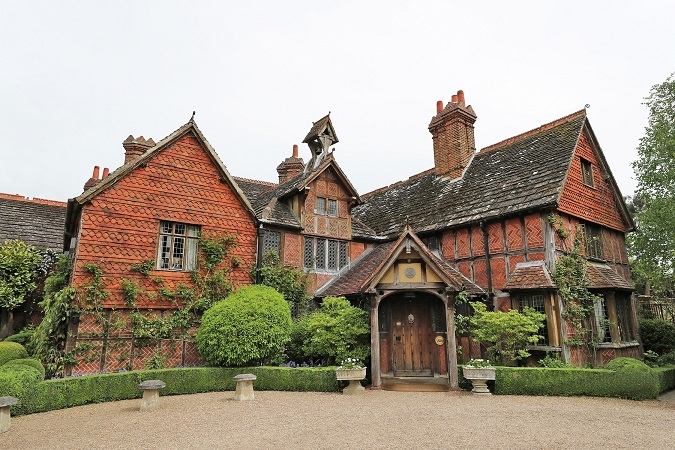 Langshott Manor, Surrey, is the genuine article: the building dates from 1580 and used to be surrounded by a moat and meadows

A stay at Langshott Manor

What is amazing is that Langshott Manor is the genuine article: a 16th-century manor house which has miraculously survived centuries of redevelopment even though it is just a few miles from Gatwick airport. As an airport hotel it must stand alone in the world as a way to jump forward 400 years between checking out of the hotel and the airport check-in desk and Langshott Manor certainly stands alone as a destination in its own right as well as a pre-holiday stopover.

Since I stayed at this delightful hotel, Langshott Manor has become more of an exclusive hire venue, but is still available to book for certain dates, known as the ‘Lovely Langshott Experience‘ so do check what dates are available. 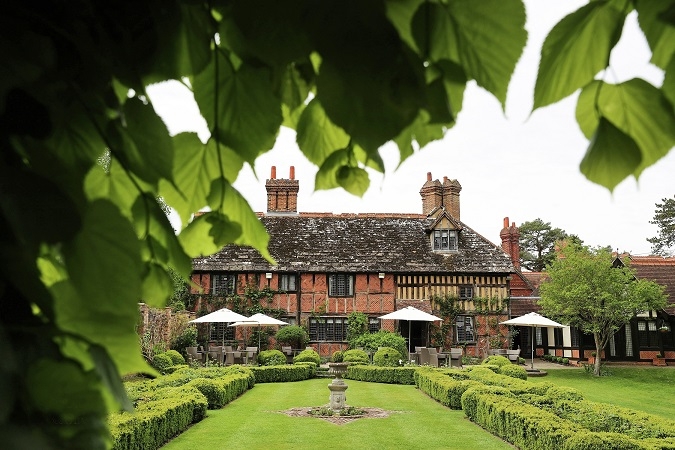 The grounds at Langshott Manor

Those used to spacious boutique hotels with endless corridors and acres of land might have to adjust to 16th-century dimensions: while Langshott Manor used to be surrounded by a moat and parkland, meadows and pastures just a semi-circular lake and a pretty garden at the rear of the hotel remain.

However while the approach to the hotel is through houses, the other side is pure forest with lanes and footpaths to explore and made for a lovely afternoon walk before the sun set and we headed back to warm up in our room. 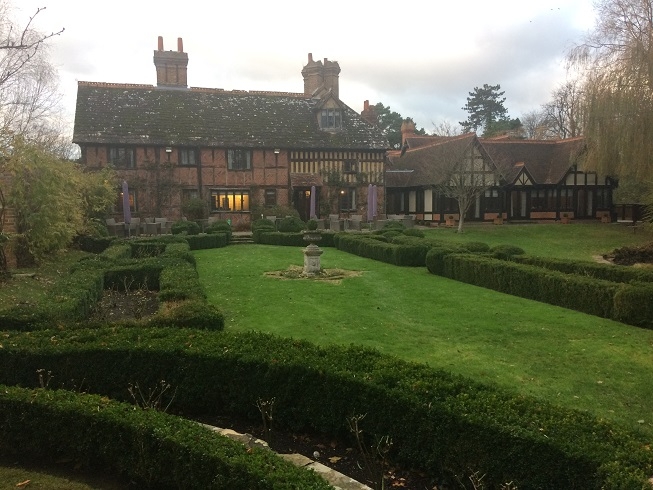 More than with other hotels, I would say that choice of room at Langshott Manor is crucial: some of its 22 rooms are quite modern and while smart, lack the historic character which you would expect one’s first impression of the hotel, while others are the real deal. So Catherine Parr for example is a modern room which could be in any hotel, while the Leeds junior suite in the main building not only has a four-poster bed but a quite bonkers four-poster bath squeezed into the minute bathroom (the only one in Europe, I was informed: I’m afraid I couldn’t quite see the appeal). 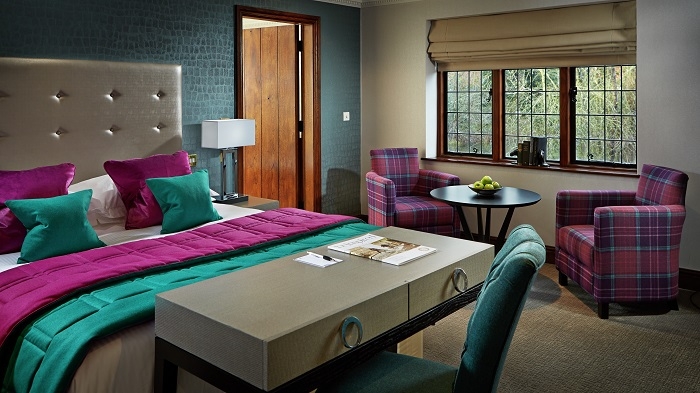 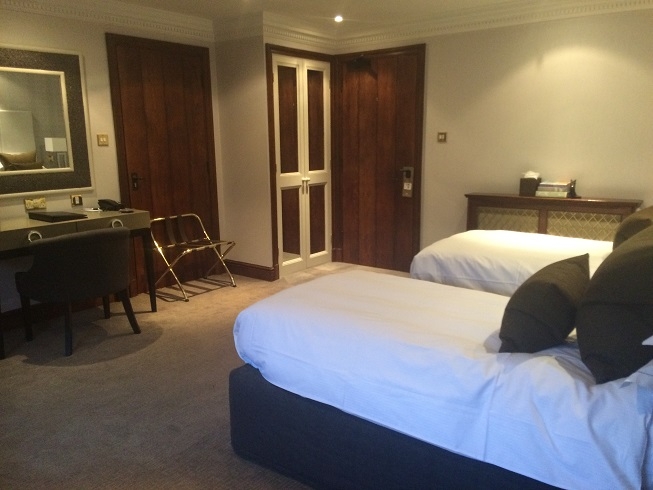 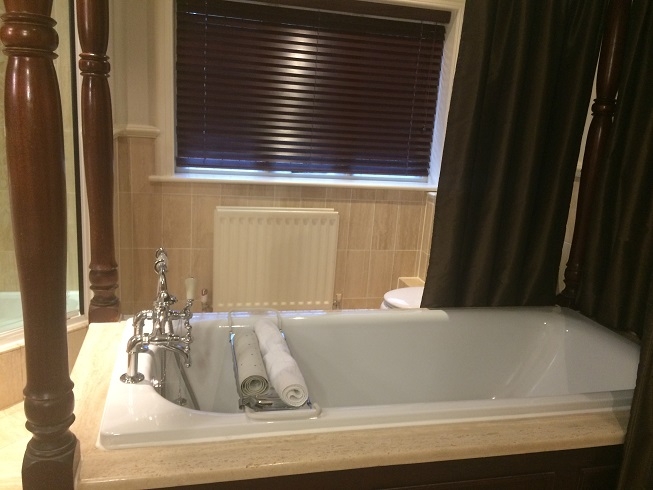 In my opinion there is only one room to choose if you want the full medieval luxury feel: the Henry VIII room in the Moat House block (the rooms are named after Tudor characters, racecourses or castles). 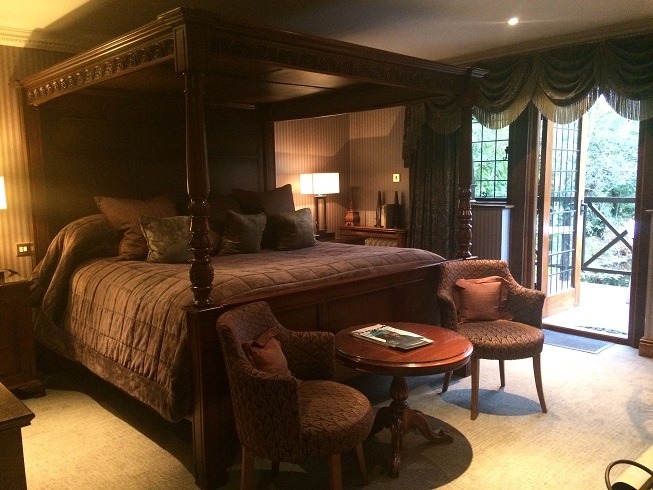 Our room, Henry VIII, had a grand four-poster bed, private balcony overlooking the lake, a desk, plenty of storage and a real log fire 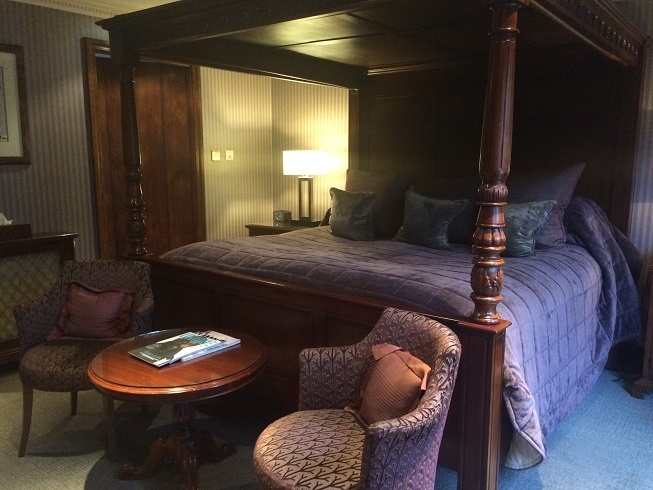 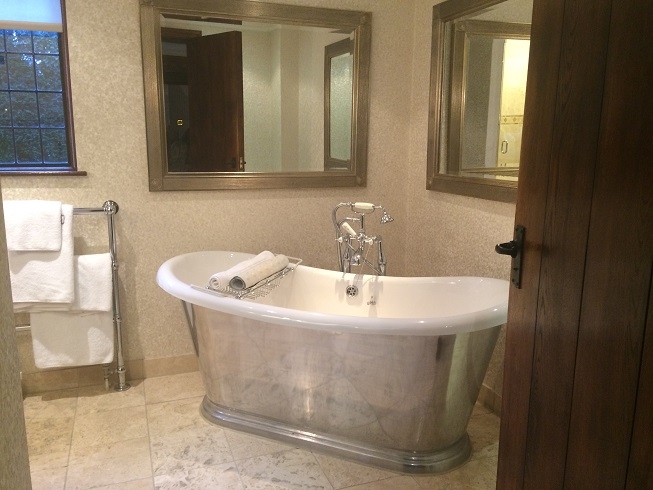 The bathroom was very smart, with a walk-in shower, twin sinks and a stand-alone bath tub (which filled up really quickly) 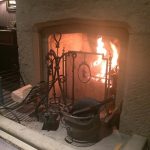 The room not only has a large four-poster bed but a lakeside balcony, good-sized bathroom with a walk-in shower, twin sinks and a vast free-standing bath tub and best of all, a real log fire which someone will light for your on request. Drinking a pre-dinner cocktail in front of your very own fire makes for a really special hotel experience and we were feeling very well looked-after as we walked across the courtyard to the main building for dinner. 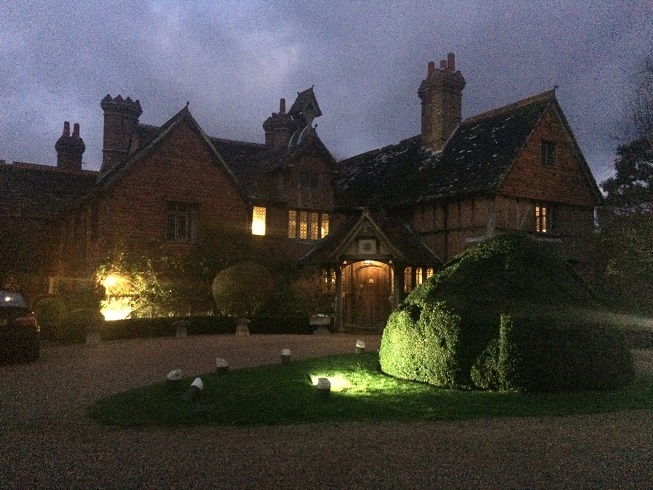 As well as the restaurant and some rooms upstairs, the main building has a galleried reception which was really impressive and certainly set the historic feel from the very beginning. There were also three small lounges, a couple of which – if I’m honest – could be improved somewhat in furnishing and decoration to fit in with either an Elizabethan or luxury hotel theme. 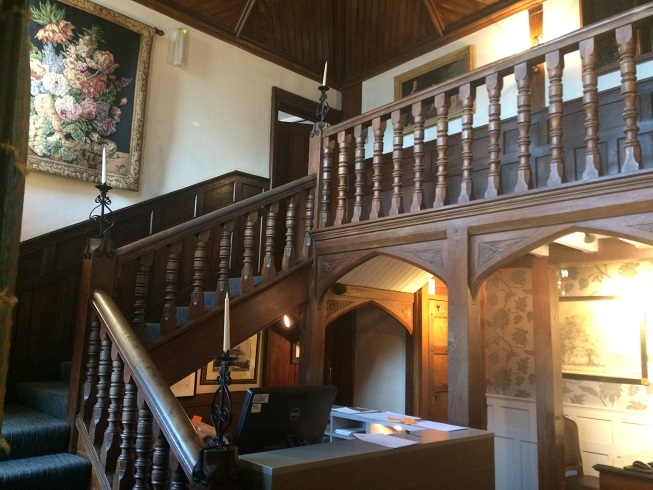 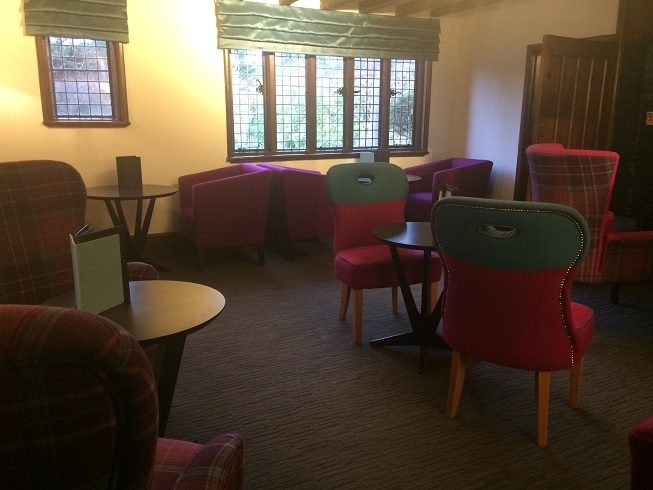 Earlier people had been enjoying afternoon tea in front of the fires and while the hotel doesn’t have a bar as such, staff will happily serve you pre- or post-dinner cocktails. I chose to try the gin and prosecco-based cocktail of the month which was excellent and a great start to the dinner which was served in the light and airy Mulberry restaurant at the rear of the hotel. 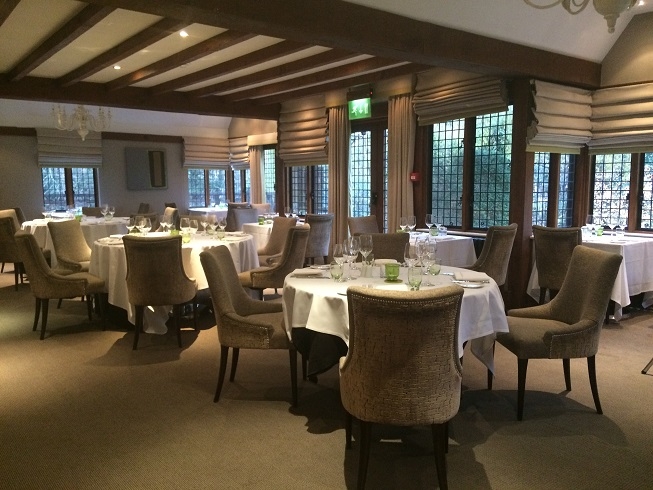 Dinner was a mixed bag: some of the dishes were excellent, some less so and at this price point (£45.50 per person for two courses, £53.50 for three) the service should be first class rather than slightly hit and miss. The menu was certainly eclectic: starters included mosaic of game with red fruit mustard, pickled blackberries and chocolate; smoked beetroot terrine with gorgonzola and horseradish and tartlet of crab thermidor with cheese sable and samphire. 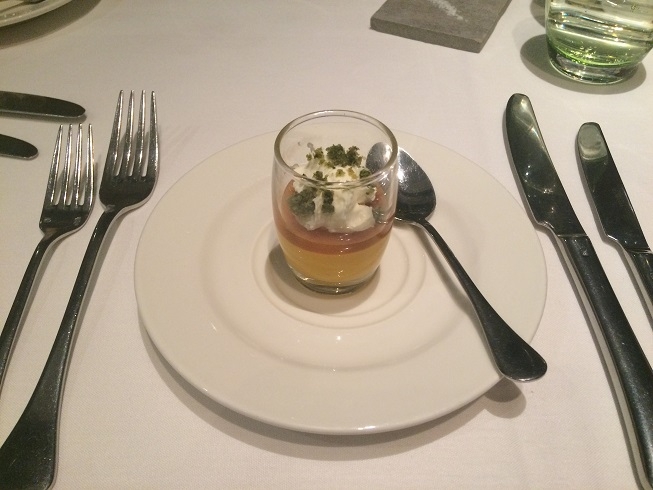 The amuse bouche of carrot and orange espume, egg white and coriander 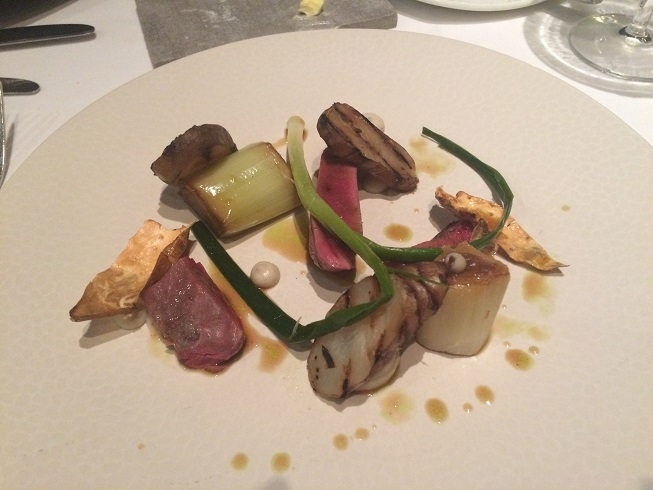 My starter of seared breast of wood pigeon, Jerusalem artichoke, truffle and leek 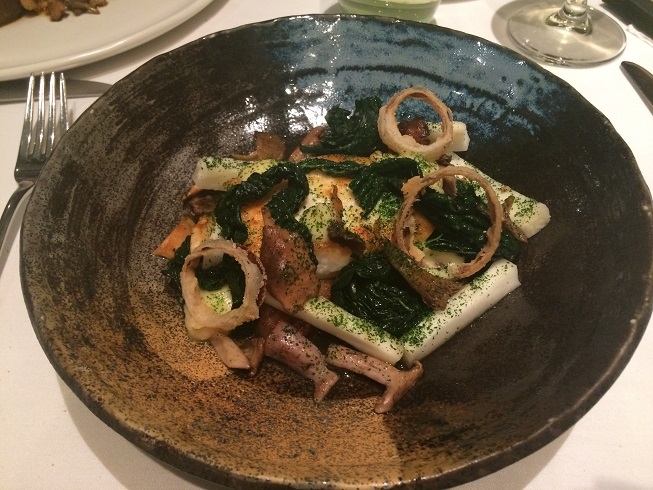 I played it relatively safe with seared breast of wood pigeon which came with Jerusalem artichoke, truffle and leek and followed it with seared fillet of Gigha halibut and celeriac, truffle dashi and black cabbage. They were both well presented and were perfectly acceptable (although the pigeon wasn’t wildly tasty and everything could have been hotter) and I liked how the menu offered simpler options too – so if you didn’t fancy the idea of ‘coco nib-crusted loin of venison with cauliflower and coconut’ you could opt for a plain rib-eye instead. 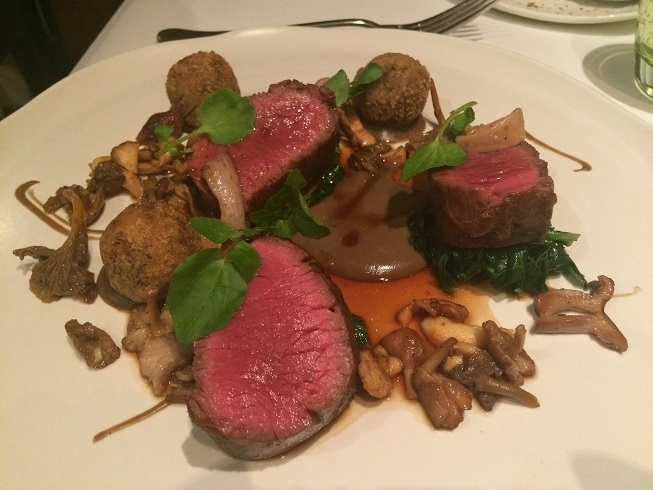 The excellent aged fillet of beef with wild mushroom, oxtail and beer

My dining companion’s choice of aged fillet of beef (£5 supplement) was the stand-out dish of the night though – perfectly cooked, excellent accompaniments and a generous size. A nice touch came at the end of dinner, with a labelled box of petit fours (so you knew you were tasting grapefruit macaroon and salted lemon fudge without trying to guess) and we returned, replete, to our room to find the turndown service had made it even cosier for us. 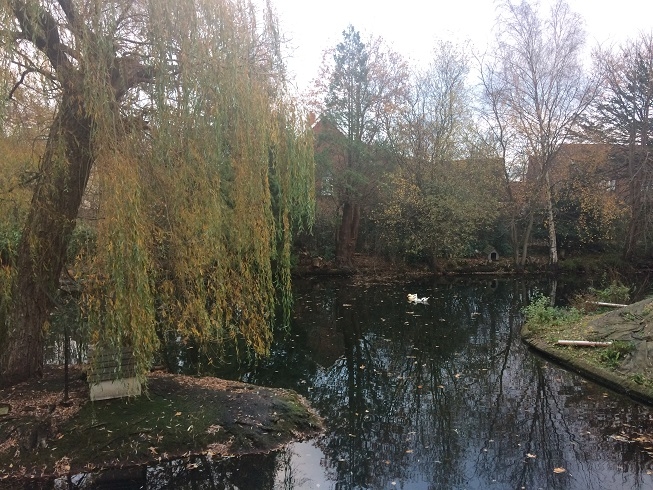 The view of the lake from our bedroom balcony

After an excellent night’s sleep in our four-poster bed and saying hello to the ducks who were happily splashing about in the lake below our balcony we made our way back across to the restaurant for breakfast. Again the service was patchy (there was only one very over-worked waitress on duty) but my smoked kippers and poached egg was just what I wanted. 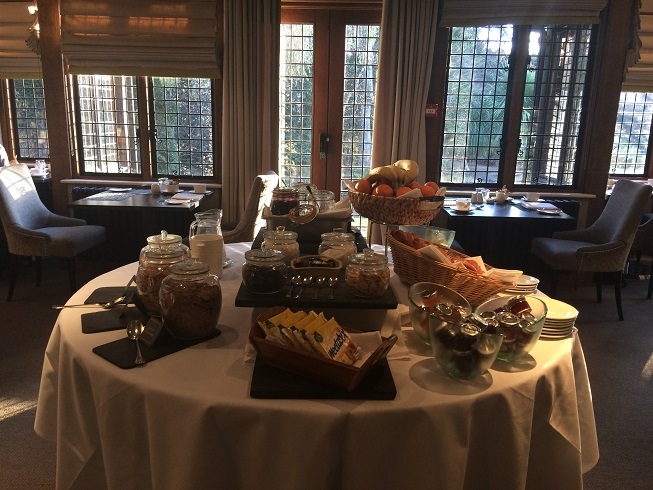 Breakfast was served in the Mulberry restaurant

With a little work making the lounges feel cosier and more luxurious the hotel could be a real winner – but if you are prepared to shell out for the Henry VIII suite then that will suit you perfectly as a really memorable night away: with the real log fire you’ll never want to leave your room. 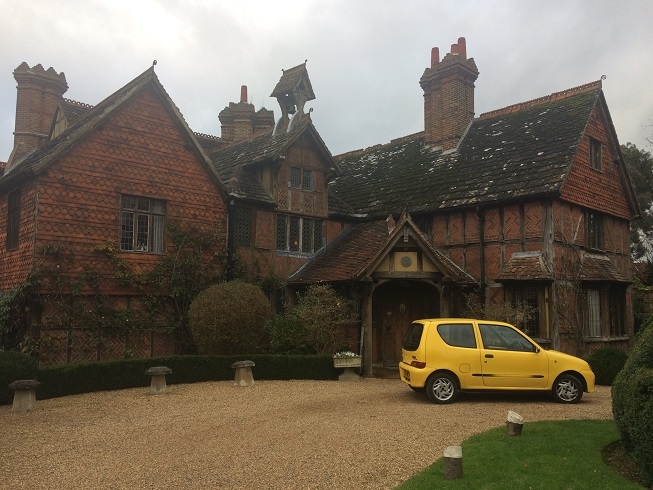 If you’re looking for lovely hotels to stay in in South East England, then look no further! Bond, Bridget and me: my stay at Stoke Park luxury hotel; A West Sussex spa hotel stay come rain or shine at South Lodge near Horsham; Family fun and activities galore at Foxhills, Surrey