Calling a hotel ‘family-friendly’ often means that those travelling without children run a mile in the opposite direction, but the luxury Foxhills spa and golf hotel is so vast that all ages and groups can thoroughly enjoy themselves without crashing in on someone’s else’s peace and tranquility. 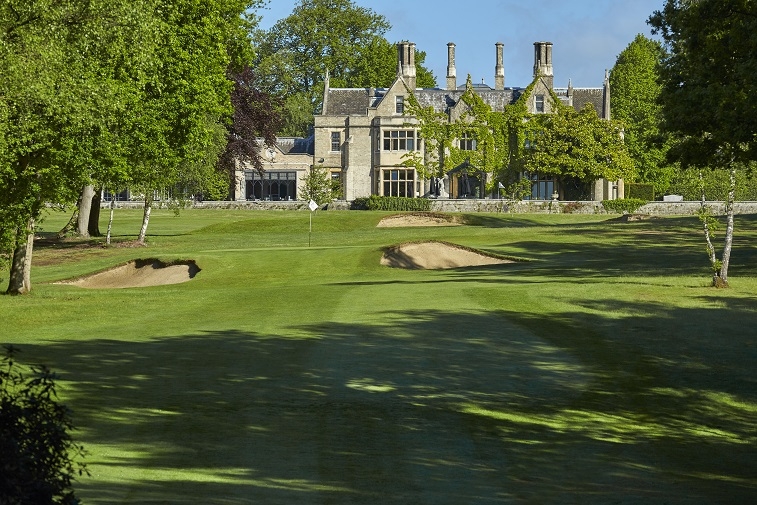 Foxhills hotel is surrounded by acres of lawns, woodland and pristine golf courses

Set on a 400-acre estate in Surrey, handily just a few miles from the M25 and M3 motorways, Foxhills is such a size that your room key comes with a very useful map of the grounds. It’s perfect for sporty types as there are two 18-hole championship golf courses and a smaller 9-hole one, 11 tennis courts, three swimming pools (one indoors, two open-air) and a spa, all surrounding the main building, the 19th century Manor House. 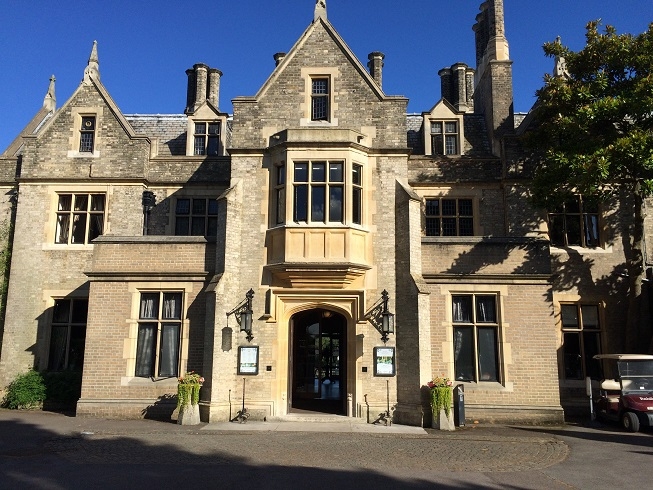 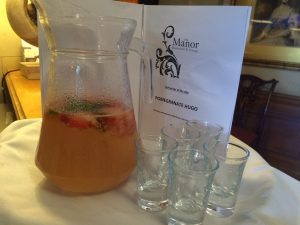 I arrived in the pouring rain which meant that the tennis courts were empty and the clubhouse was packed with people who would have rather been out on the fairway. However in the classic British summer way, within half an hour the sun was shining and Foxhills was transformed. Check-in was quick and friendly and a jug of a refreshing non-alcoholic cocktail for guests at the reception desk was a nice touch.

There are 70 rooms and suites at scattered around the grounds at Foxhills, including recently refurbished executive suites with their own private gardens.  My room was in a courtyard, overlooking a lovely outdoor pool on one side and the tennis courts on the other. 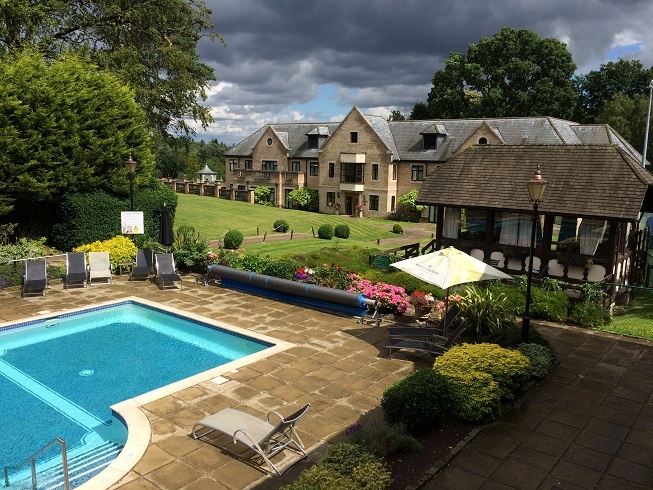 The view from my room including the courtyard pool, another building containing more bedrooms and some impressive rain clouds in the distance 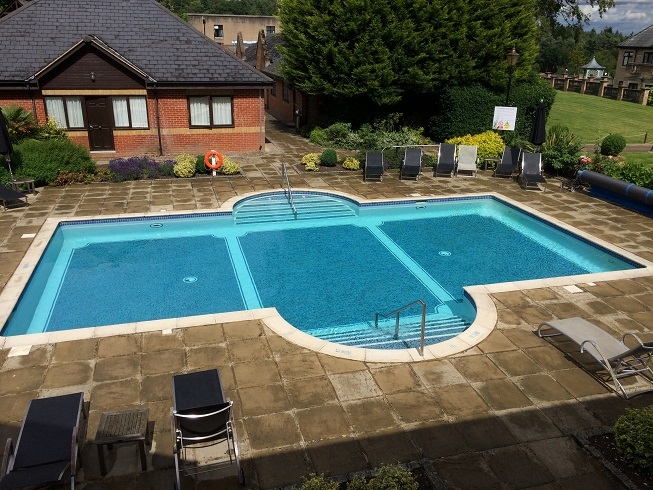 Once the sun came out, so did the tennis players: Foxhills is a popular tennis club and has hosted a Aegon Pro-Series International world ranking tournament since 2007. 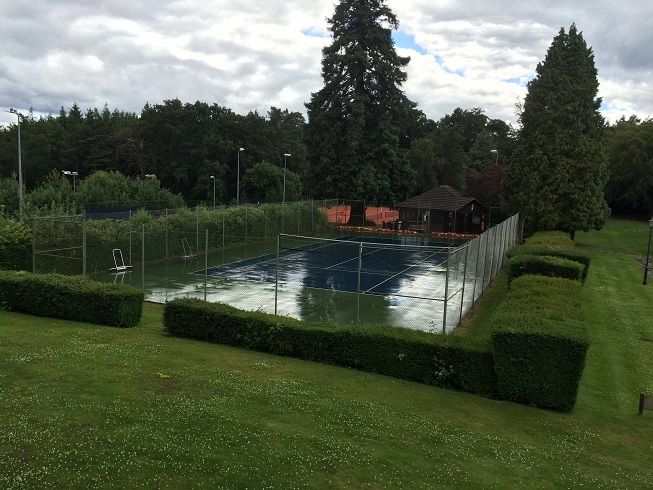 What a difference 30 minutes can make! The rainy courts as seen from my bedroom window… 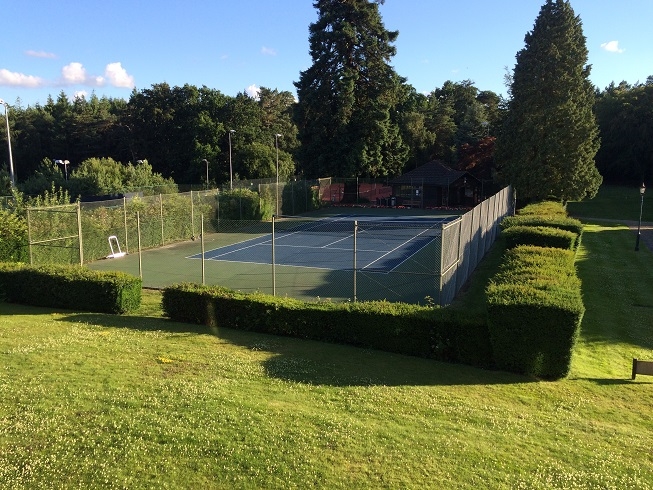 …were suddenly transformed when the sun came out

The spa at Foxhills Surrey

As I was travelling alone and have played golf just twice in my entire life (I’m not counting crazy golf in Bognor Regis) I gave the tennis courts and golf courses a miss and headed instead for the spa complex, which has an indoor pool, steam room, sauna and best of all, a lovely spa garden where you could relax in the outdoor hot tub or on one of the many loungers tucked away in little pockets of the hedge. 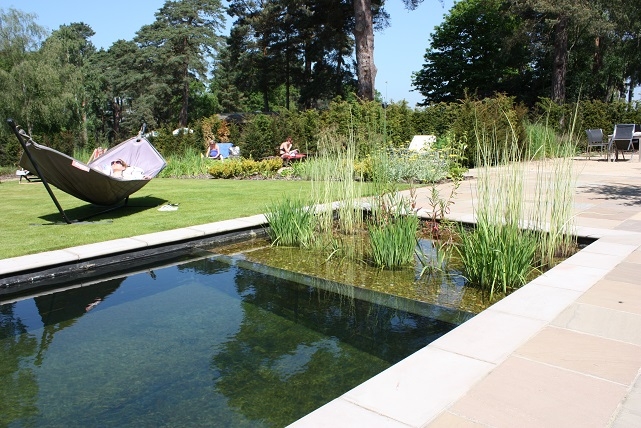 The Spa Garden contain a natural pool, a hot tub and plenty of loungers to relax on

It was extremely pleasant lying out in the late afternoon sun and there were nice touches such as the natural swimming pool, in which the water is purified by plants and algae, and all the lockers having place names rather than numbers (such as Whitstable and Westward Ho!) which made it easier to remember. 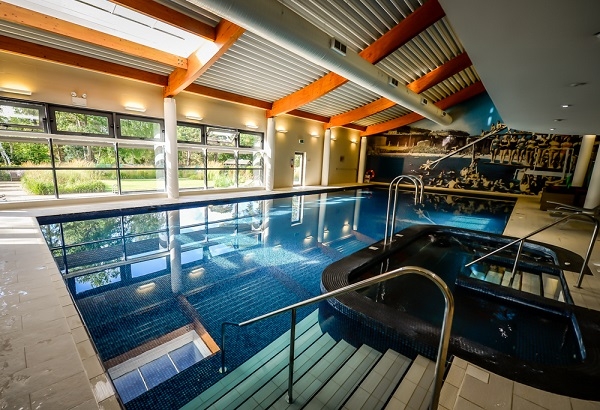 The indoor pool in the spa complex

For families with younger children there is another indoor pool on the other side of the grounds, with a playroom, teenager’s chill-out space with table football and a pool table, and a good-sized outdoor pool area complete with a cafe, lots of loungers and lots of room. With the sun shining it was now a hive of activity and delighted squeals from the children, and meant that the spa garden itself was child-free for grown-ups who wanted a more relaxed environment.

After a lovely snooze in the sunshine I headed back for a swim in the courtyard pool before dinner. Despite a sign saying it was open until 10pm, the covers got put on at 6.30pm but at least it meant I had time for a pre-dinner cocktail sitting on the Manor House terrace, enjoying the stunning view. Being in the middle of a large estate meant that Foxhills is incredibly peaceful and it’s easy to feel relaxed very quickly. 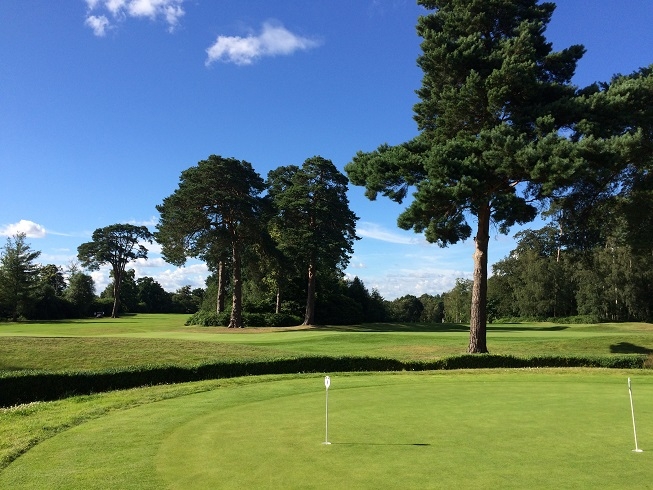 The golf courses make for a beautiful setting for the hotel

The restaurant at Foxhills

Dinner in the light and airy restaurant was very good, with prompt and attentive service. There was a six-course tasting menu for £55 – with wine for an additional £35 – as well as a la carte menus where the starters came in at around £10 and the mains were around £26. 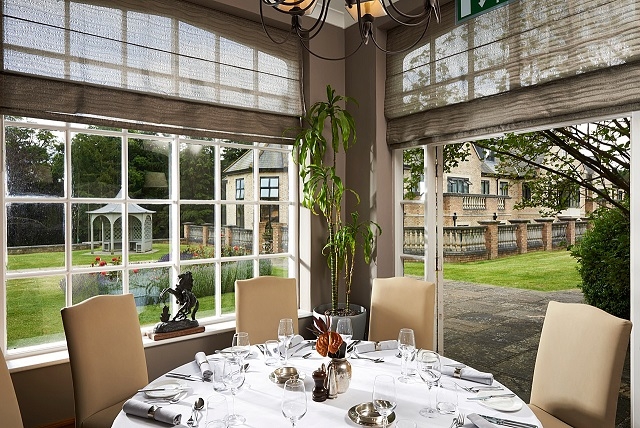 A corner of the restaurant 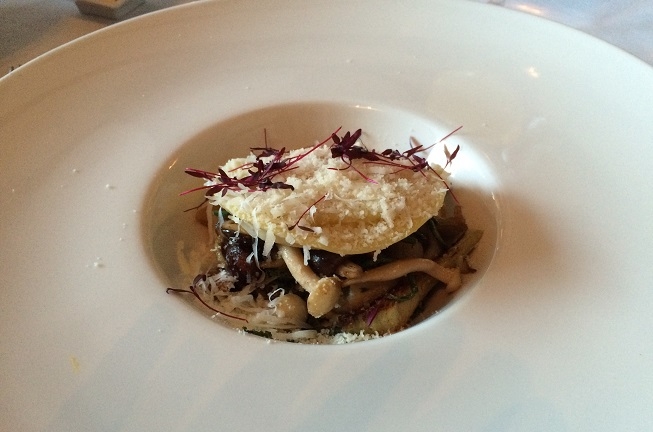 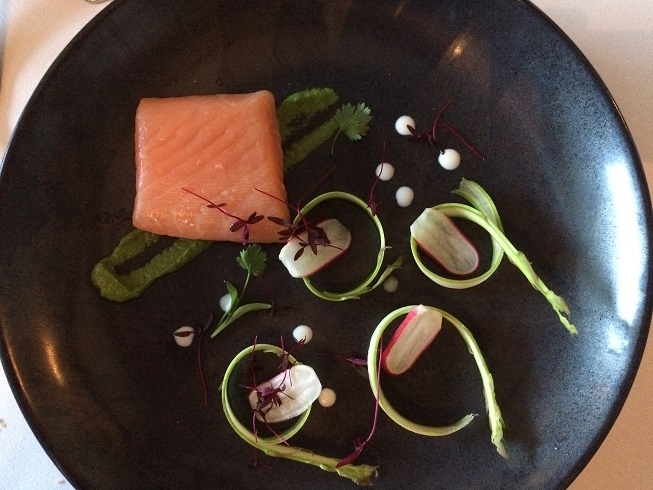 …followed by some picture-perfect salmon confit

I was treated to the tasting menu, which started off with Arlington White egg yolk ravioli, moved on to confit salmon with wasabi and radish, and then Rhug Estate lamb with cabbage and smoked aubergine. The ravioli was delicious and the salmon was fresh and instantly Instagrammable.

The lamb was perhaps a little dry but the blueberry cheesecake followed by a selection of cheese and petit fours were a lovely way to round off the meal before heading back to my room. 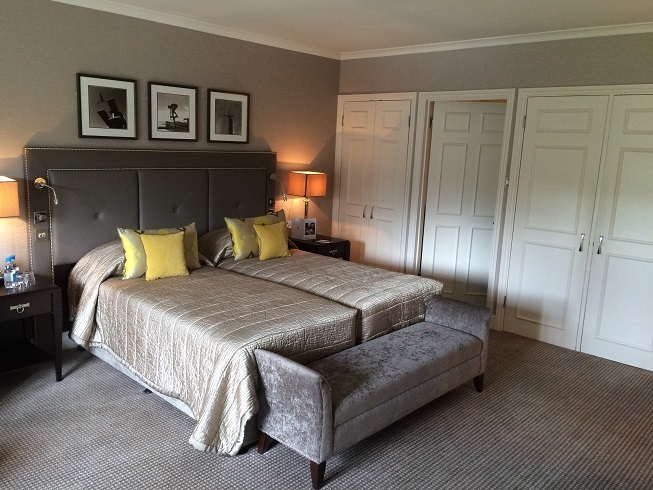 My bedroom was large, with a sofa and desk and views of the tennis courts

My bedroom at Foxhills

My room was a good size, with a smart bathroom, separate shower and lots of plug points and storage space. Rather to my disappointment there was no hotel information pack but hopefully that will be fixed now – a resort as vast as Foxhills needs to inform guests about spa opening times, dinner menus and its huge choice of activities.

Breakfast the next day was in the same room as dinner. Sadly it was marred by slow service, no newspapers (other guests were queuing up at reception to ask the same thing) and not being able to dine al fresco in the glorious sunshine which is surely a perk of staying in a place with such a lovely terrace. (It’s due to health and safety issues according to the manager, although you can dine in the open air at the clubhouse just 100 yards away). 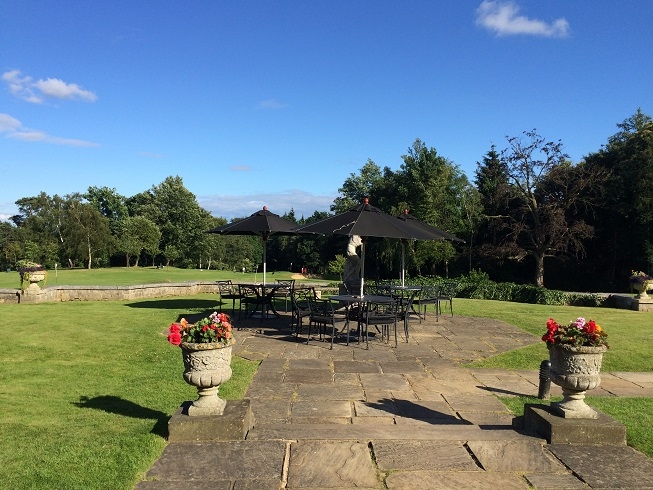 A terrace with a view…

However I took my coffee out to the lovely terrace instead and enjoyed the morning sunshine. Other guests were heading over to the tennis courts or the golf course but for me, the spa was calling…

Hotel information and to book Foxhills