Home / Hotel reviews / My stay in a chateau in France: relaxing in Le Mans at La Groirie chateau

I’ve always wanted to stay in a chateau in France and to my good fortune I had the chance to while visiting Pays de la Loire this summer. Hotels in France are as varied as anywhere in the world but a stay in a French chateau promises something special: a tranquil retreat far away from hectic modern life, and so it proved at La Groirie. 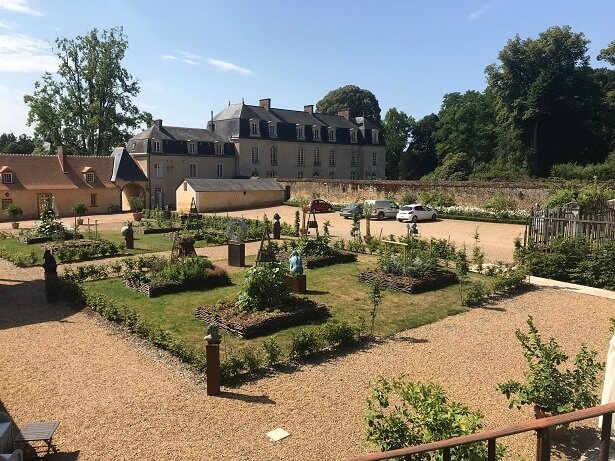 La Groirie chateau is just a few miles from the historic city of Le Mans and the property dates back to the 15th century, although the current chateau was built in the 17th century. The chateau itself, a large impressive building awaiting you at the end of a  long gravel drive, is still home to the Lepine family which owns it, and the hotel itself is just to one side, housed in what used to be the guests’ wing and now completely renovated and redesigned. 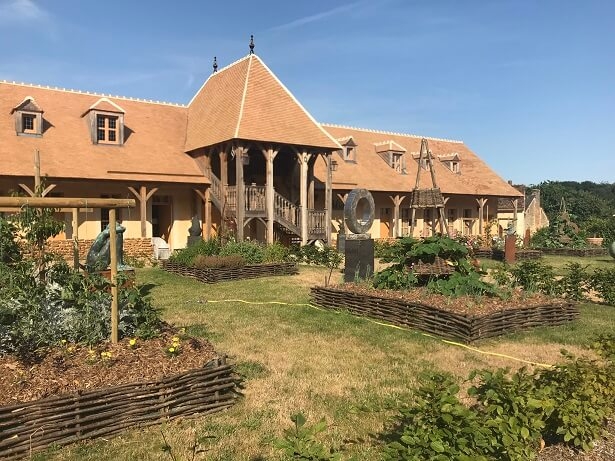 The hotel is on two levels, with the downstairs rooming all exiting straight out into the pretty grounds

The name La Groirie comes from a local Le Mans dialect, which means rocky soil which is good for growing grain. La Groirie is surrounded by miles of farmland – most of which I visited, thanks to the sat nav sending me to the middle of a field, so make sure you get good directions from the hotel before setting off, or have eagle eyes for the small sign on the roundabout from the nearby A road. 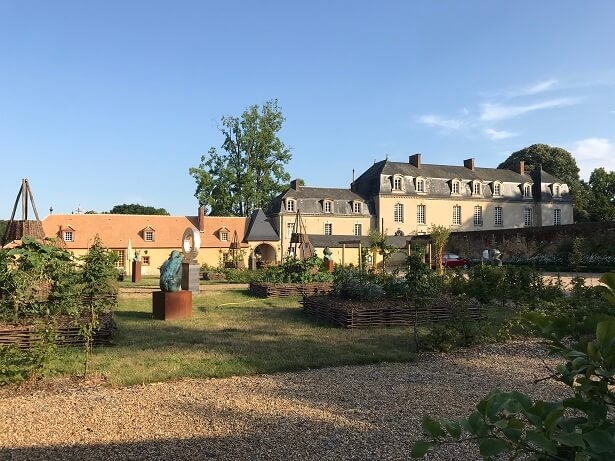 The chateau at La Groirie dates from the 17th century

The hotel bedrooms at La Groirie

There are 13 bedrooms in the hotel, most on the ground floor and some on the first floor upstairs and all are individually designed. You can therefore choose between the likes of Consular, decorated to look like the tent from which Napoleon directed his military campaigns; Memory of Italy, which is festooned with images of Naples, Vesuvius, Tivoli and the like; or the dark purples of Princess Zoubie. (All rooms are detailed on La Groirie’s website). 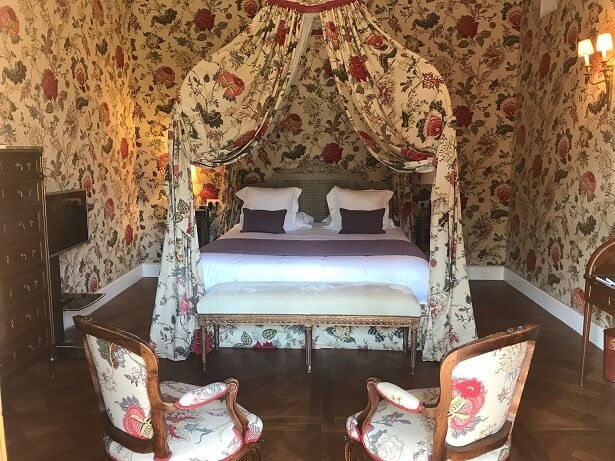 My hotel bedroom, Little Marquise, was a chintz-fest which was more relaxing than it might appear in this photo

I opted for the flowery chintz-fest which was the Little Marquise, given its appealing four-poster bed and modern bathroom with vast shower, and while it might look slightly over-the-top from the pictures it was large, airy, charming and definitely unique. 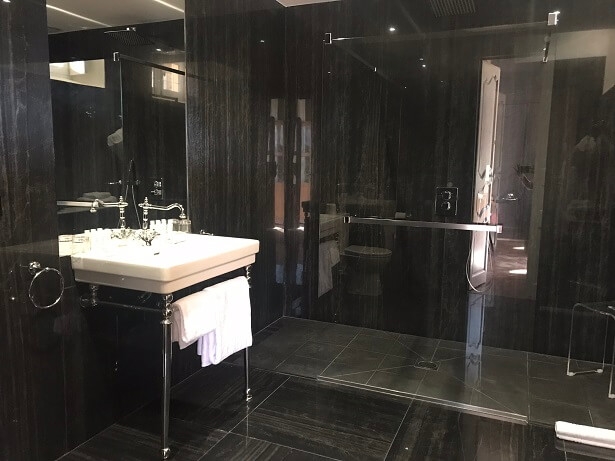 The classical bedroom of Little Marquise had a surprisingly modern bathroom

As well as the vast bed and huge curtains there were side tables, a desk, comfy chairs, a mini-bar stocked with water and a smart TV, plus good air-con and shutters on the main door. The door to the room exited, like the other rooms, straight out onto the gardens at the front of the hotel which contain interesting sculptures and outdoor seating in case you wished to read a book in the afternoon sunshine after the drive there. 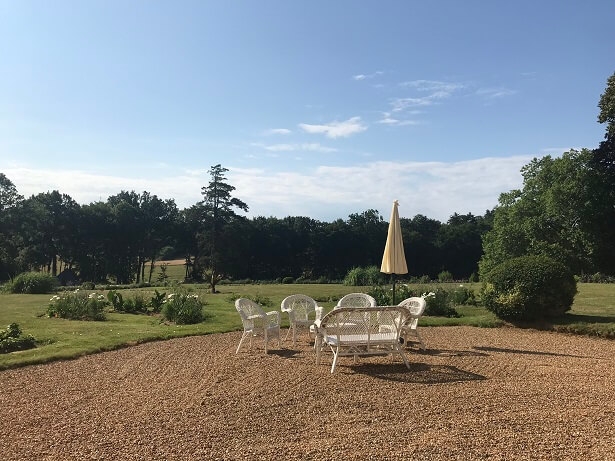 Exploring the grounds of this French chateau

I opted for a walk instead as La Groirie is set in 240 acres of land and while not all of it is accessible to visitors, there is more than enough for a good country walk around the chateau gardens. Maps are available from the friendly and helpful receptionists and I headed off to explore. In the forests at the front of the chateau is a lake with lots of overgrown footpaths to wander around in, and behind the chateau are lawns sweeping down to another body of water, called the canal, as well as a rose garden, dovecote, walkways and an orangery. 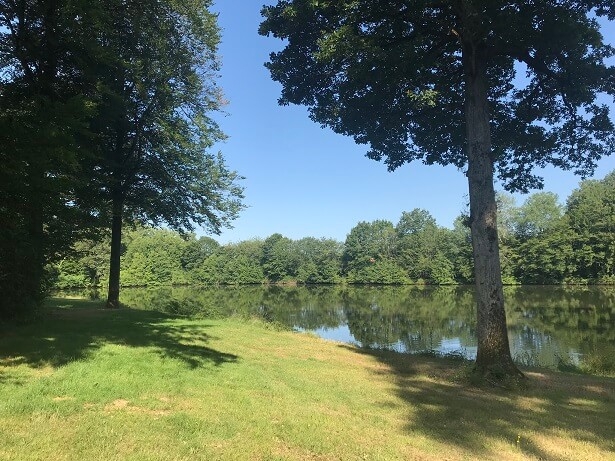 There is a lake hidden in the grounds at La Groirie

After all that walking it was time for a dip and thankfully there’s a delightful walled swimming pool just between the hotel and chateau which was ideal for a cooling swim. The hotel notes say that the pool is only open in the morning from 10.30am onwards which seemed far too late for a pre-breakfast swim but the manager kindly took the covers off first thing so I could swim in the morning as well. 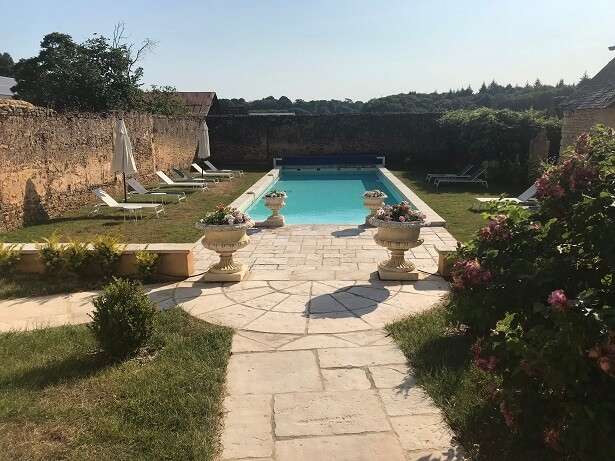 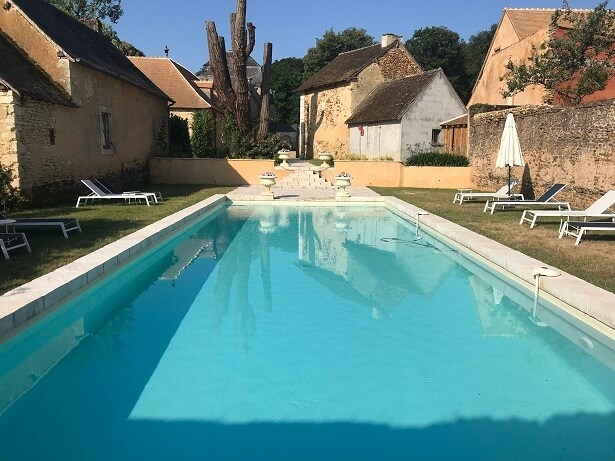 There isn’t a restaurant at La Groirie as such but there is a menu for people – like me – who wanted to stay put and not go into Le Mans for dinner. As La Groirie is one of the nearest luxury hotels to Le Mans that is probably what most people do but it was such a lovely summer’s evening I decided to enjoy the hotel instead. The menu was surprisingly extensive considering, with pasta, shoulder of lamb and curry on the menu as well as classic French dishes such as rillette and fois gras, and my salade de feves and poulet roti looked small but was surprisingly tasty and exactly what I wanted. 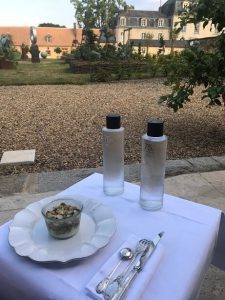 You can order drinks too and sitting out in the evening sunshine with a beer I felt extremely relaxed in this luxury boutique hotel. There is no sound from the nearby motorway (unless the wind changes and you might hear a distant rumble) but considering it’s just a few miles from major transport links you could be in the middle of nowhere and makes for a really relaxing French break. 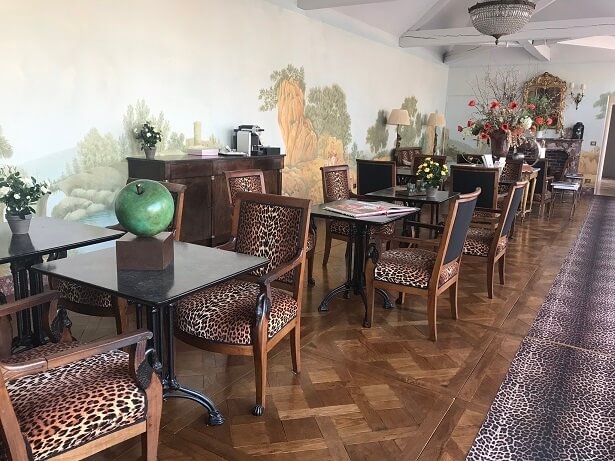 The breakfast room at La Groirie 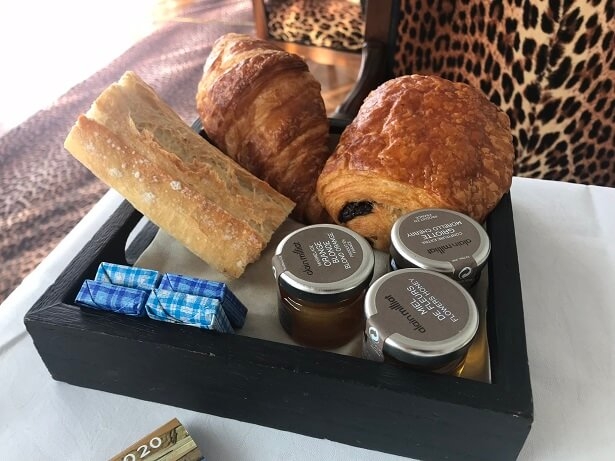 A traditional French breakfast in France is a real treat and breakfast at La Groirie was a mix of gorgeous French bread and butter and pastries and coffee from a machine and I realised that I would have to watch my bread consumption over the next few weeks as it is impossible to stop eating once you’ve started. Then it was back on the road and off to explore Le Mans, just a few miles away.

If you like reading about amazing destinations then check out: The best luxury hotels in Mauritius; My perfect Jamaica holiday: beaches, bars and island beauty; A Caribbean birthday on the island of Nevis; Making friends on a Mark Warner holiday;