The Botanist, Sloane Square was packed as the pre-theatre crowd were getting a few swift ones in before heading across the road to the King’s Head Theatre.

Thankfully the restaurant itself was rather quieter as we were here on a very serious quest: to sample London’s Most Decadent Pancake. 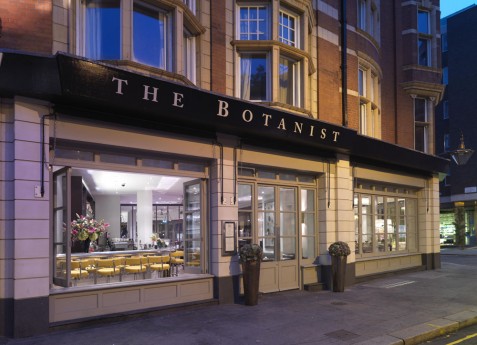 The Botanist, Sloane Square, is promising ‘London’s Most Decadent Pancake’ for Shrove Tuesday

Pancake Day at the Botanist

The publicity blurb – it’s possibly the first pancake I’ve heard of that has its own PR agent – heralded it thus: ‘The super-indulgent £32 pancake contains beautiful chunks of fresh lobster, morel and chanterelle mushrooms and a creamy, smoked garlic bisque – something to be savoured rather than scoffed!’

Would it be the perfect pancake for pancake day? Before we could decide for ourselves whether to savour or scoff, we were first treated to a starter of dressed Dorset crab which was sizeable, tasty and came with a nice glass of sauvignon blanc.

Then it was time for the main event: the Decadent Pancake – rather fitting in a week when 50 Shades of Grey is provoking all sorts of debate about what is decadent or not. 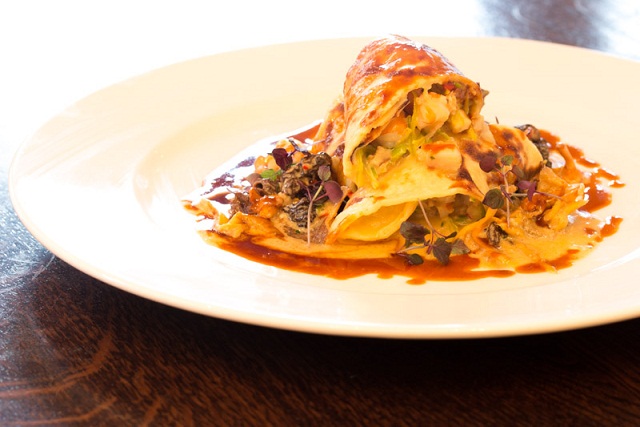 London’s Most Decadent Pancake gets ready for its close-up…

It was perfect to share – at that price we were only allowed one to try – and it was very nice and gloopy, with leeks added to the lobster and mushrooms. The bisque was pretty powerful stuff, almost like balsamic vinegar, but was sparingly applied, and while I’m not sure I’d be happy paying £32 for it, it was certainly a novel dish.

While I was still fairly replete from my weekend scoffing and savouring at The Compleat Angler hotel in Marlow, I worked my way through half a pot of mussels – the other half was donated to my dining companion whose fishcakes were so salty as to be inedible (and we like salty food). The waitress agreed it was too salty for her but that that was the way the Botanist made them, which is a shame because it had looked rather nicely presented. 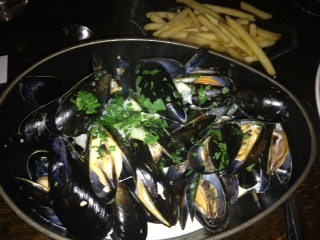 While the fishcake was way too salty, the mussels were delicious

However the restaurant redeemed itself with a really excellent creme brulee, and a glass of Tokaji sweet wine which rounded off a very pleasant evening.