It is always a good sign of a hotel restaurant if you could imagine going back there without being an overnight guest and Apero restaurant in South Kensington, London, definitely fits that description.

Tucked beneath the Ampersand hotel and the pavement – though designed in such as way that natural light still streams into the restaurant, Apero looks at first glance rather basic and simple, but offers a menu which is anything but.

It looks plain and simple, but the food at Apero is thankfully neither

The decor might be unfussy, with white tiles and exposed brick walls in what is basically a Victorian cellar, but the food is quirky and fun and made for a memorable evening.

[Note: this review was originally written in 2014 so some details might be out of date.]

Starting off with cocktails

I and my friend Lisa went for the £22.50-a-head sharing menu, a selection of dishes selected by the chef, and kicked proceedings off with a pair of Aperol spritz cocktails, which seemed appropriate.

Aperol, the Italian aperitif which is essentially Campari-lite, has been the ‘new big thing’ in cocktails for about a year now – a lifetime in cocktail terms – and so it seemed time for me to try one before the fad ran its course. Our Aperol spritzes (spritzi?) with Aperol, prosecco, soda water and a slice of orange were very refreshing and were indeed reminiscent of Campari but with a sweeter taste. 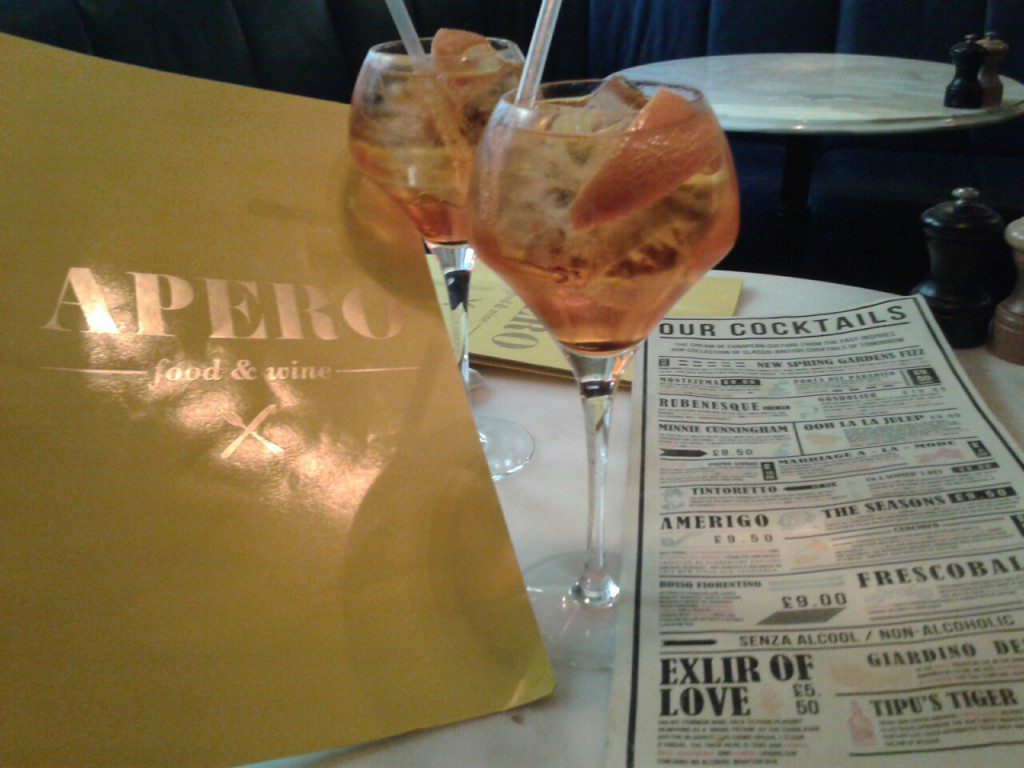 Aperol spritz’s at Apero – it seemed rude not to

Getting stuck into the starters

I have been trying to avoid starting a meal off with bread recently as not only could I do without the calories but it inevitably means I’m full before the main course arrives. However I made an exception with the selection here because it was so delicious – seaweed wholemeal bread with smoked butter and saffron and fennel seed bread with Salmorejo, a tomato and bread puree which described like that sounds awful but which was actually extremely good. 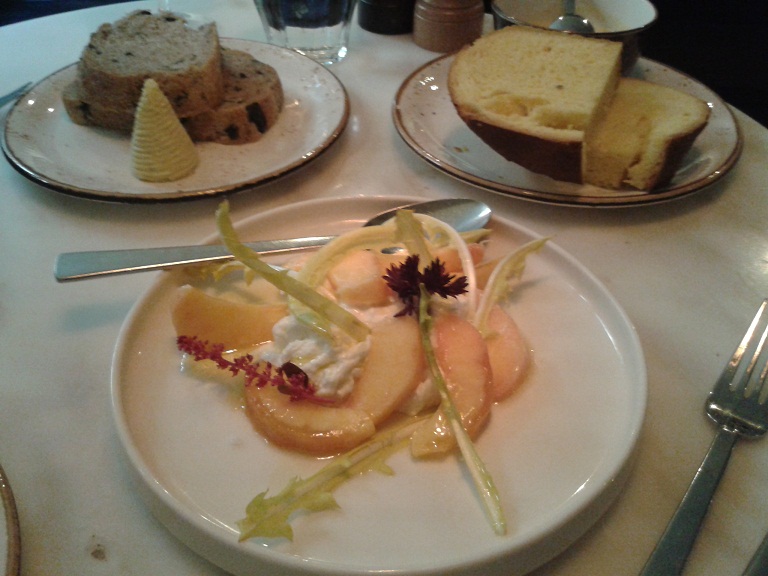 Then came stracciatella and peach – the stracciatella being the soft gloopy gorgeousness that comes inside a burrata, which is itself a softer and gloopier version of buffalo mozzarella and which I could eat by the tractor-load (there was a lot more on the plate before I managed to stop scoffing and actually take a picture).

Already pretty happy with our lot, we were even happier when a massive wodge of tuna tartar arrived, accompanied with yellow beans and almonds, so we ordered a small carafe of white wine to celebrate. I couldn’t decide between three different wines, in that happily dithery moment where you’d be happy with anything so can’t actually decide on anything, so our very helpful waiter Sam hit upon the bright idea of bringing us three taste-portions of each and carrying out an impromptu blind tasting. 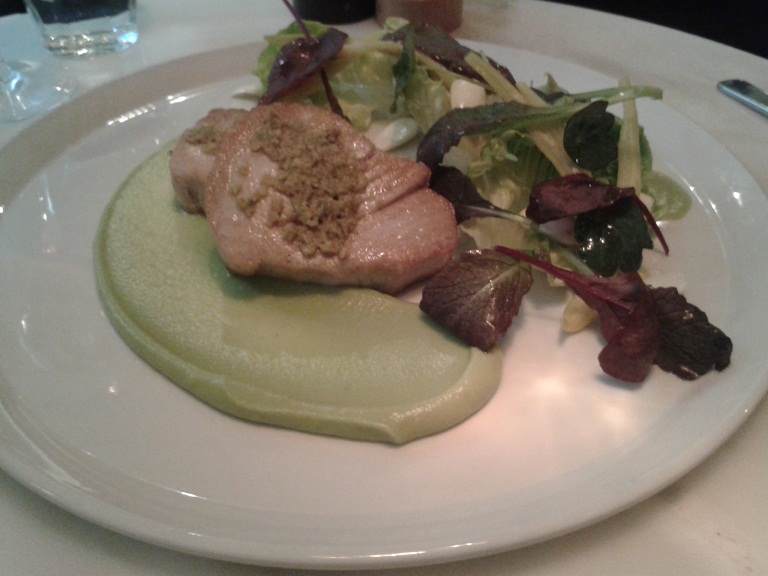 The tuna was delicious, as was the wine we (finally) chose to go with it

A trio of slurps later and our choice was instant, the Sicilian Caruso & Minini had triumphed over the French Picpoul and Sauvignon Blanc – and we’d discovered an inspired way of taking the gamble out of ordering wine in restaurants.

The next dish was beef ribeye, with borlotti, tomato and olives and was a hearty, Italian-style dish which would have been perfect on a cold winter’s night after a long hike across the hills, but which was just as good on a barmy summer’s evening after a short walk from the office. 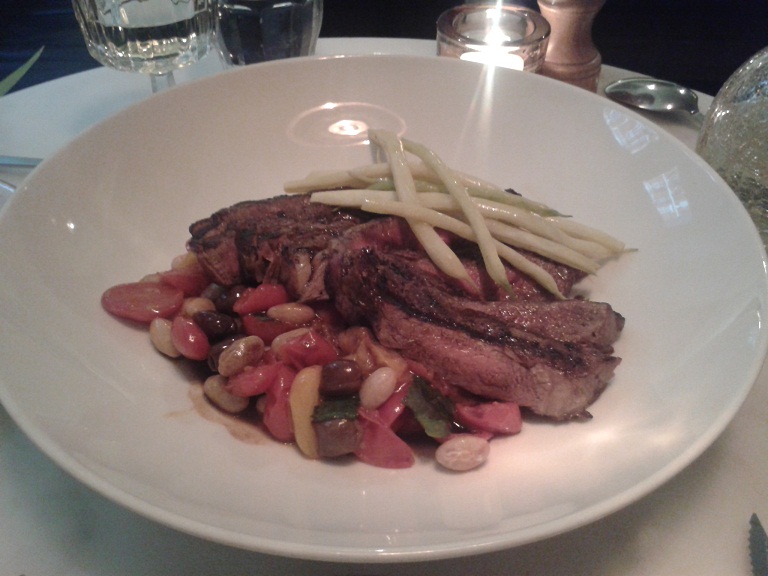 Ribeye beef, pink and sliced tagliata-style, on a warming bed of beans

We thought we should move onto the red at this point and were hoping for another mini wine-tasting, but we had a waitress by now who was adamant about what we should have  – a Spanish red from Andalusia called Iniza Tinto. Thankfully it was a perfect accompaniment and so we submitted to the return to the old way of doing things without making a fuss.

We were starting to flag happily by now so just a baked peach, almond crumble with marscapone cream was left, slightly oddly placed round the edge of the plate as if waiting for completion by a centerpiece. 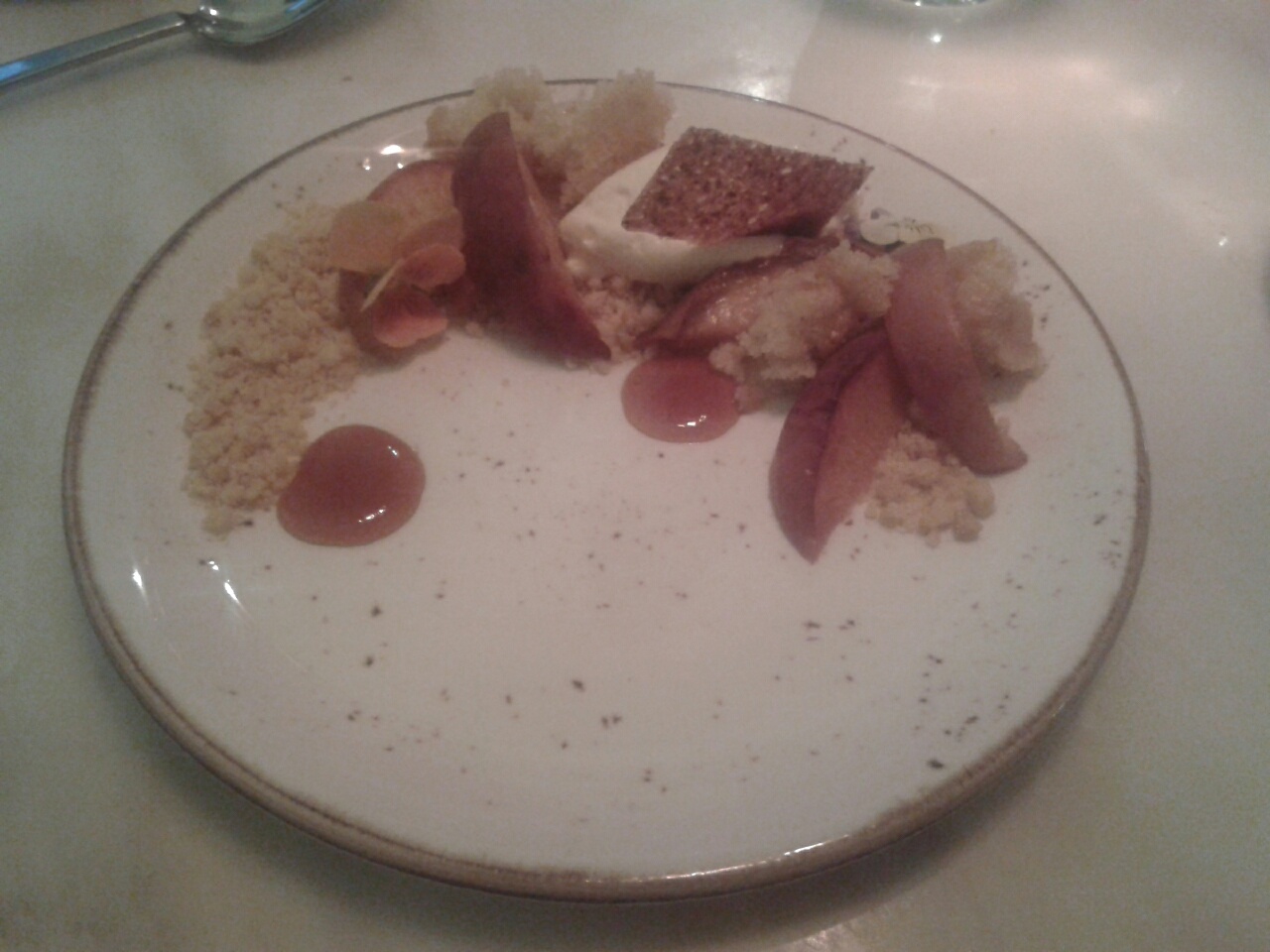 The desert looked as if it was waiting for something else… but thankfully not, as we were at maximum capacity by then

However any more and we would have burst – and thankfully at this point the chef Chris Golding came along and having sat down for a good old natter about the food then whisked us off for a look around the rather tiny but obviously extremely efficiently run kitchen.

Our quick tour served to perk us up out of our food stupor and so we relocated to the bar to sample some cocktails. The Italian bartender very kindly spirited up an English Negroni made with Sacred’s collection of gin, rosehip cup and vermouth, while Lisa deciphered the font-frenzy of the cocktail menu – which was pretty reasonably-priced compared with other bars nearby – to have an Oh la la Julep cocktail, with Santa Teresa rum, Velvet Falernum (what a great Bond girl name), tobacco bitters and Amer Picon, which Google tells me is a rare French digestif. 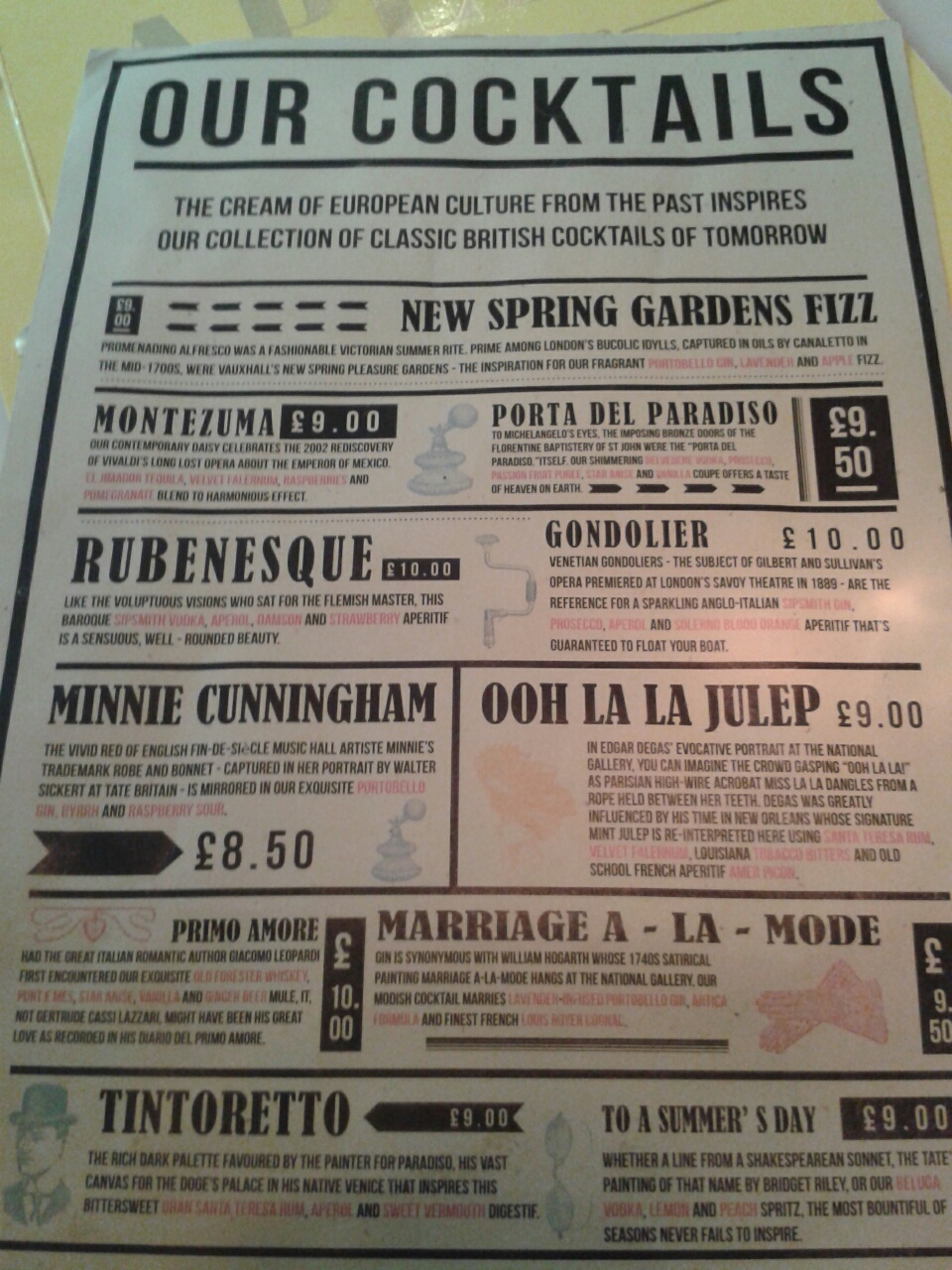 The cocktail menu – a frenzy of fonts. Impossible to decipher if you’ve had a few…

For the price – £30 each or £36/£40 including a small carafe of wine – I thought it was an extremely entertaining and good value  menu. It almost seems to ruin the flavour of the evening, ending as it has done on a Velvet Falernum note, to mention breakfast the following morning, but that was also done really, really well.

An ample buffet was laid out in impressive style, and hot options included a full English, eggs Florentine, Benedict and Royale, but also on offer were quirky twists on the traditional fare such as turkish-style poached eggs, yoghurt, chili and avocado; wild mushrooms and poached eggs on grilled seaweed bread with sauce hollandaise; and halloumi cheese, fried potatoes, tomatoes, spinach and minted yoghurt. 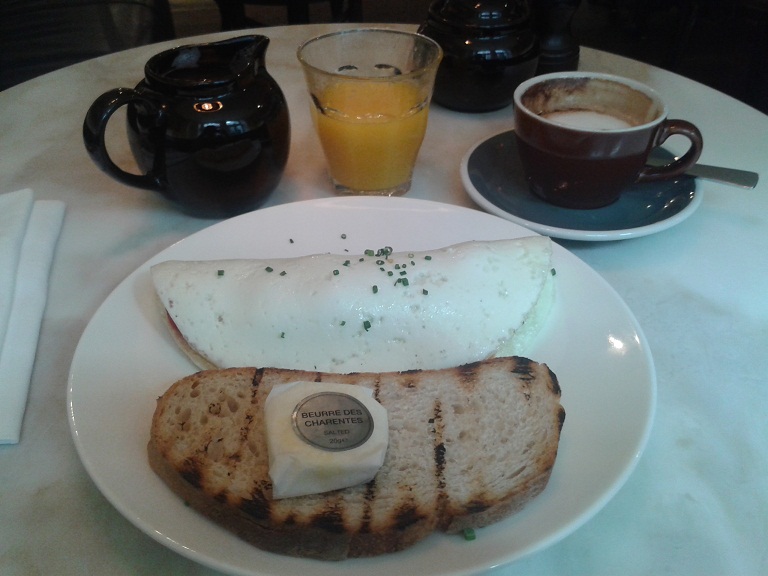 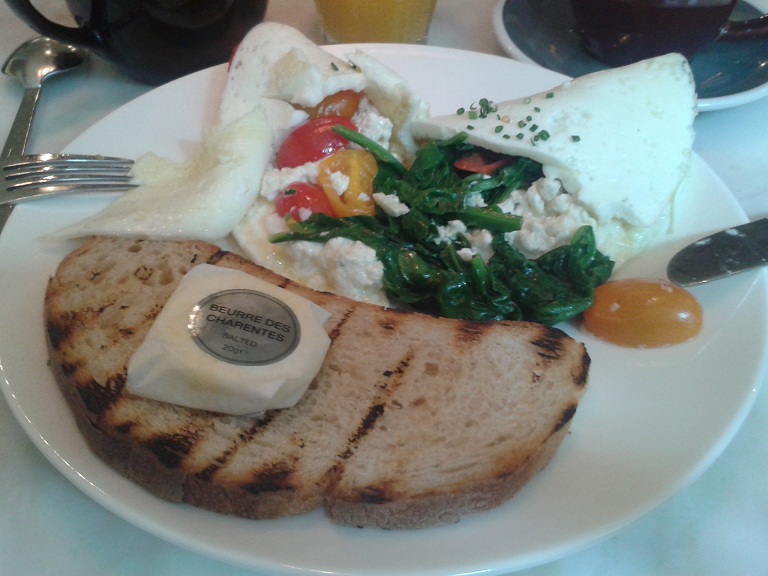 ….and was then open!  You’re just going to have to imagine the third picture (an empty plate)

For the first time ever I chose the egg white omelette which came with goat’s cheese, tomatoes and spinach, and while I still can’t see the point of egg white omelette, it proved that Apero was an extremely good place in which to start the day as well as to end one.