It was when I was hiking along the North Devon coast in the rain that I started to question whether my plan to go on a boot camp to lose weight was worth its hefty price tag. Would I actually lose weight on a boot camp?

A week on a weight-loss boot camp in Devon

I was halfway through a week at NuBeginnings, a self-styled ‘boutique boot camp’ which promises to help you shed pounds. Apparently no-one has ever failed to lose weight during their stay. This was a powerful incentive to keep on marching through the mist after my personal trainer who had disappeared in the mist over the next hill, but it did come at a price. 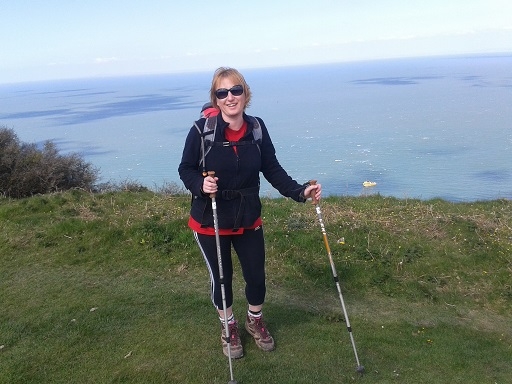 Preparing to hike – before the rain started coming down 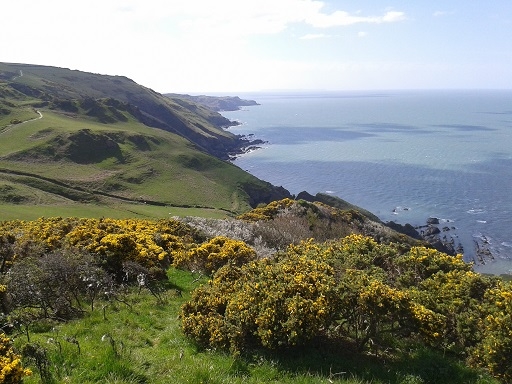 For the same outlay, you could get a week in a luxury resort in St Lucia or gym membership for a year – plus your very own personal trainer. So, was my wet week in Devon worth it?

[Since this article was published then NuBeginnings has ceased running its weight loss boot camps in North Devon. Links to other weight loss and fitness venues can be found at the end of this article]

NuBeginnings was set up by former management consultant Victoria Wills in 2008 when she topped 20 stone (she’s 5ft 4in). While trying to stop her pattern of yo-yo dieting, she saw the opportunity to set up a luxury weight-loss retreat where people would use hypnotherapy and massages, as well as changes in diet and exercise, to address their issues with food. 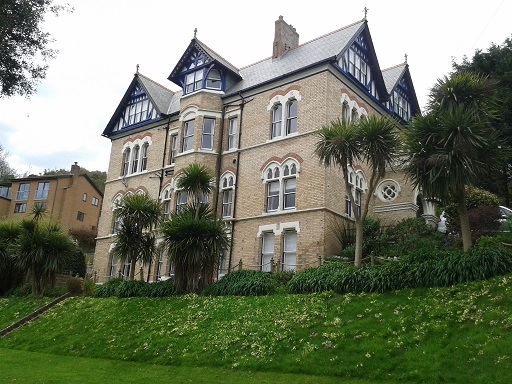 She also decided that it would be a totally different experience to those boot camps run by ex-military types who wake you up at 5.30am to do an hour of lunges before breakfast and then half-starve your throughout the week while also expecting you to scale walls and run up hills.

As I am someone who has a fairly sedentary lifestyle due to work but who is keen to get fitter and lose weight, NuBeginnings sounded the perfect solution for me. However a week on a strict diet – I assumed there would be no sweets, no chocolate and certainly no alcohol – was an alarming prospect. 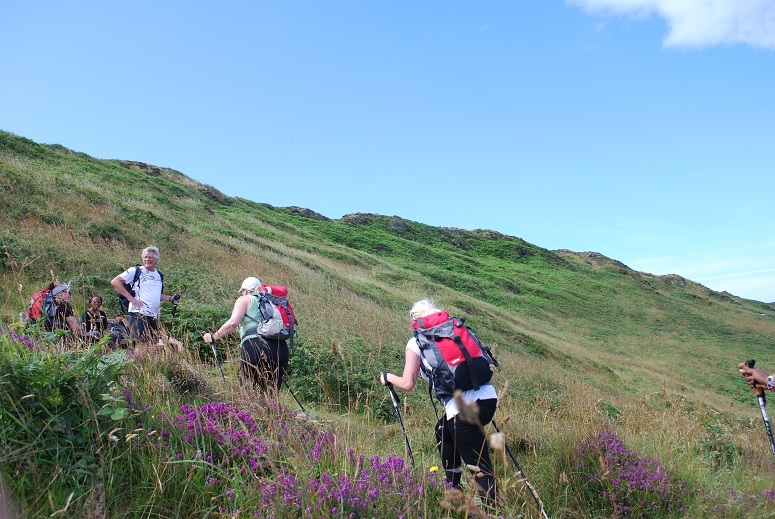 Hiking is a large part of the NuBeginning’s exercise programme

No chocolate, no alcohol – how would I cope?

While waiting for the train from Bristol to Tiverton, the nearest station to Ilfracombe, it took reserves of willpower I didn’t know I had not to binge on beer and chocolate bars. However it was also proof of how much I needed to get a grip on my relationship with booze and food if just the prospect of a week without either was enough to make me go into a spin.

Having resisted all temptation during my last minutes in the ‘real world’, I arrived at Westwell Hall, my home for the next week, and found I was completely starving. Jennie, who manages NuBeginnings along with her partner Dave, allowed me one apple and five nuts. We were clearly starting as we meant to go on. Then it was straight upstairs to change into work-out gear for a fitness test and to get measured and weighed. 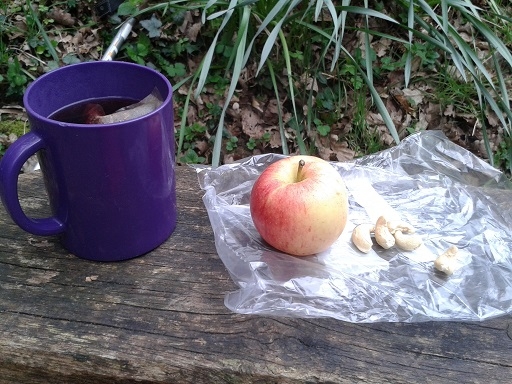 Mid-morning snack on a lengthy hike: herbal tea, an apple and five nuts

After a welcome talk it was time for dinner and to meet my fellow guests. As well as Anna, 35, from Italy, there was Julie, 50, an accountant from London and Belinda, 25, from Hampshire. Julie had been to NuBeginnings when it first opened, had lost 11 pounds in two weeks but had since put them all back on, Anna was a first-timer like myself and Belinda was halfway through her own two-week stay.

Dinner was actually very pleasant, if small: salmon skewers and quinoa. The newcomers raced their food down – Belinda ate incredibly slowly and even, to our astonishment, left a piece of salmon uneaten. Was she mad?

It turned out she was practising ‘mindful eating’ which meant eating slowly, putting your cutlery down between each mouthful and always leaving some food on your plate, which stopped you automatically polishing off everything in sight. It did seem incredibly wasteful but it was also a good way to feel in control of what you were eating, rather than feeling that you had to eat everything you were given.

While the food was nice it felt odd just having one course: we were in a kind of hotel after all, where you’d normally expect pudding or cheese, or coffee – and here there was nothing. 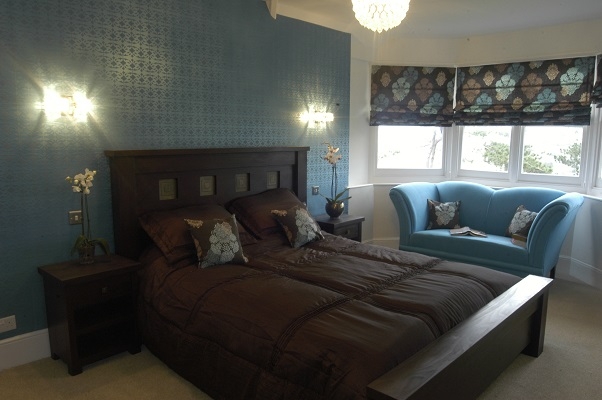 After a stretching session we retired to our rooms – there was little else to do – and I started to feel absolutely famished. Why on earth hadn’t I sneaked in an emergency supply of mini Mars bars? I knew why I hadn’t – I thought it was best to throw myself in whole-heartedly to the project rather than sabotaging it from the very start – but I was certainly regretting it now.

However after half an hour the hunger pains had completely gone and I realised that much of my eating is probably due to habit and boredom rather than actually needing sustenance. By 9pm I was sound asleep – the earliest I had been to bed for decades. 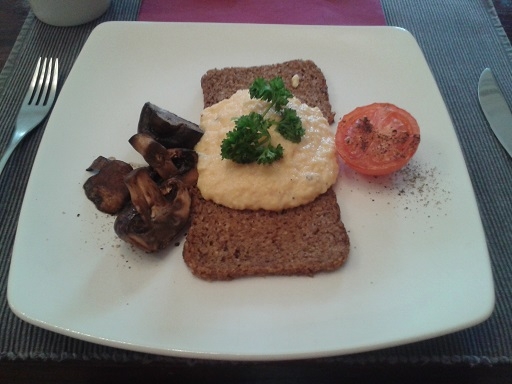 Breakfast on Sunday was a special treat: scrambled eggs! Still no coffee though…

Our days soon settled into a regular routine: a wake-up call around 7.30am, then a fitness class before breakfast such as Pilates or core stability: one morning we were running up and down sand dunes on the nearby beach for an exhausting hour, while being tortured with the smell from a local café selling bacon sandwiches. 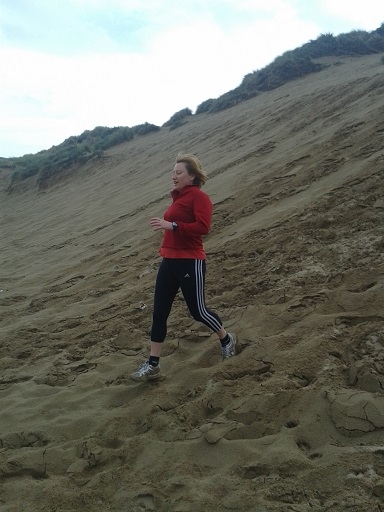 Training on the sand dunes before breakfast. A great way to get fit (but you do need a trainer to force you to do it) 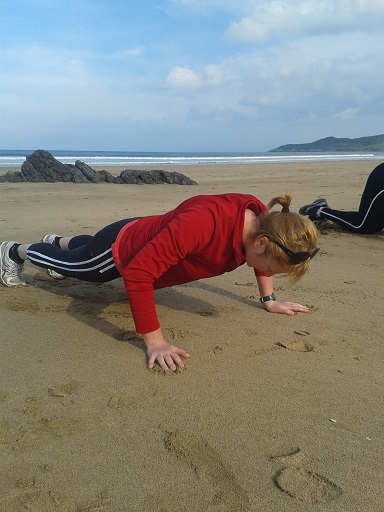 Attempting to do press-ups on the beach. I am dreaming of bacon butties at this point

Then we would be given a tiny (to my eyes) breakfast of granola or porridge, or eggs on rye bread, and then we could go out for a walk/jog along a disused railway track, along the coast path or have more fitness classes such as Zumba, Boxercise and Qigong (similar to tai-chi).

The afternoon was a much more leisurely affair, when we would be booked in for massages or could lounge around in the tiny sauna. The  sports massages were superb, particularly from a burly South African called Werner, who thoroughly unknotted every single knot in my calves and shoulders. 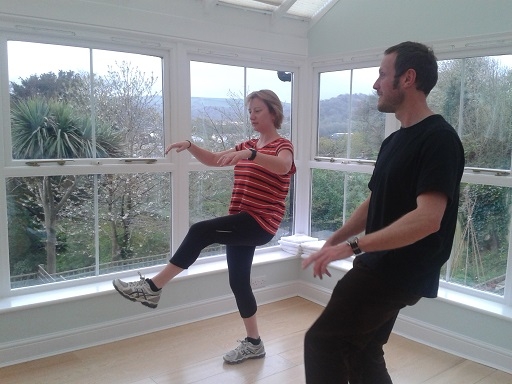 My introduction to Qigong. I am trying to look as if I know what I’m doing…

We also did three longer hikes during the week, carrying soup for lunch in our backpacks. They were hard work, especially in the rain, but it was good to get out of the house. Westwell Hall, our home for the week, was an imposing former hotel overlooking Ilfracombe and had the air of an old school – the rooms were nice but not the height of luxury, and it was fairly spartan. 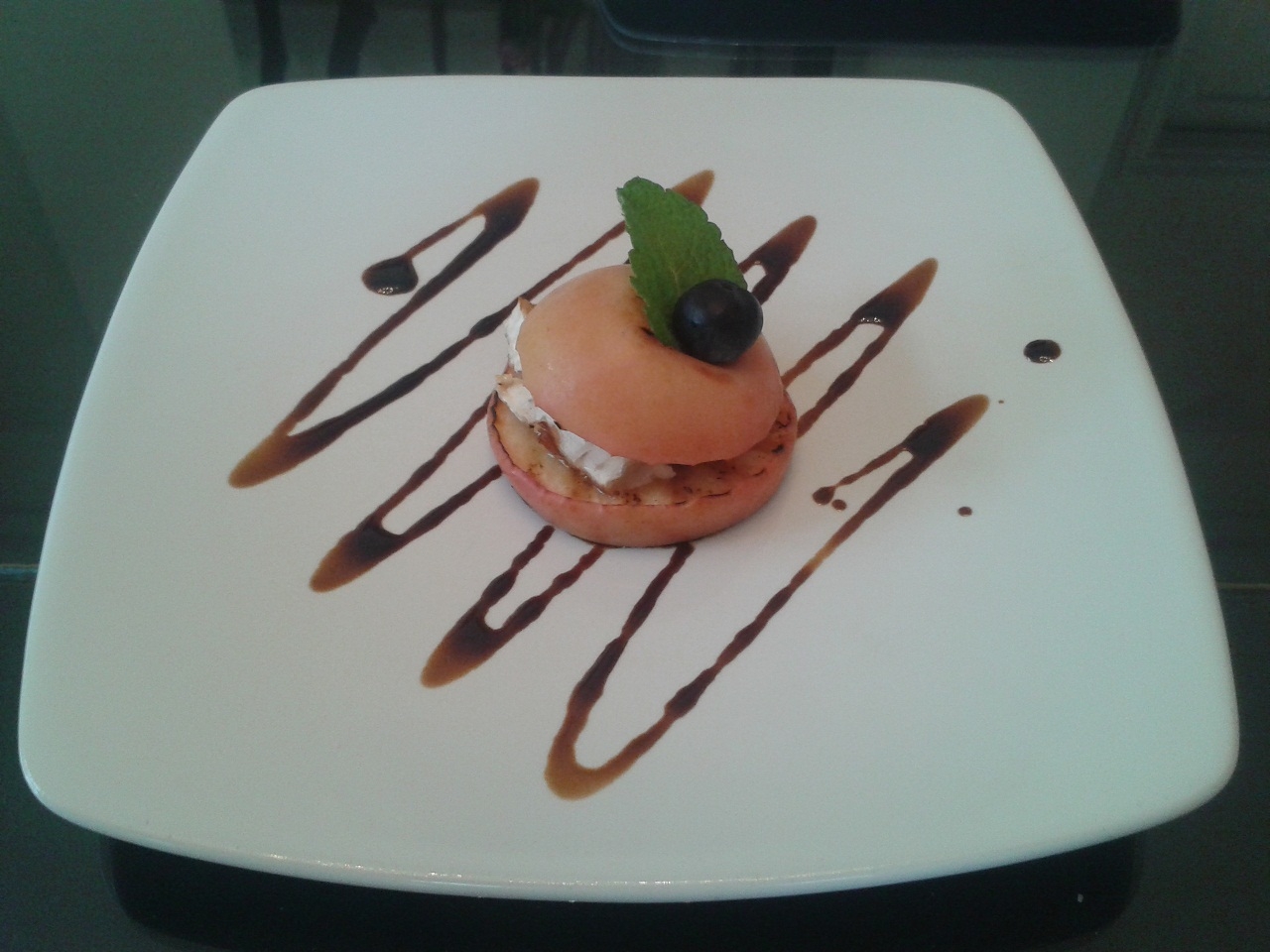 The afternoon snacks were small but very tasty. Here is apple and cheese with balsamic… 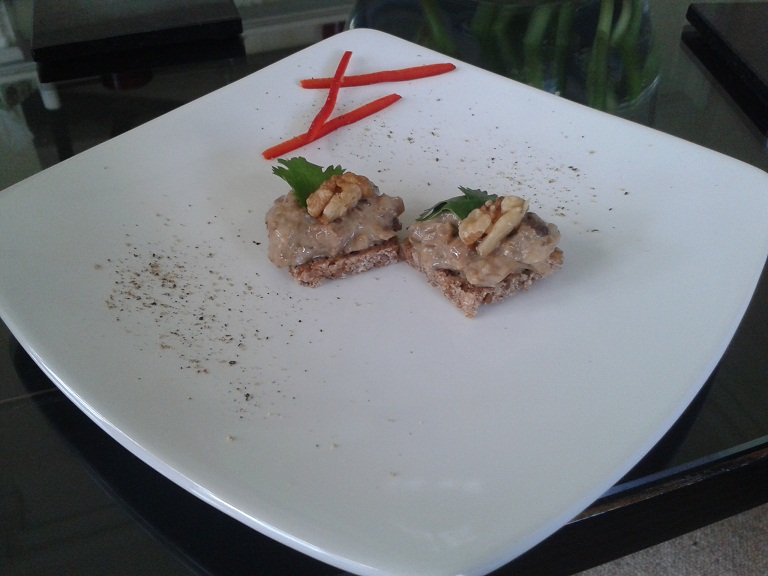 ..while mushroom pate on rye bread was a big (small) hit

Every night we ate dinner at 6.30pm and then after an hour of a cooking demonstration or a talk about nutrition there was little to do but chat and then go to sleep, so after a while we had all regressed to a child-like state where we existed just to eat, sleep and move around. 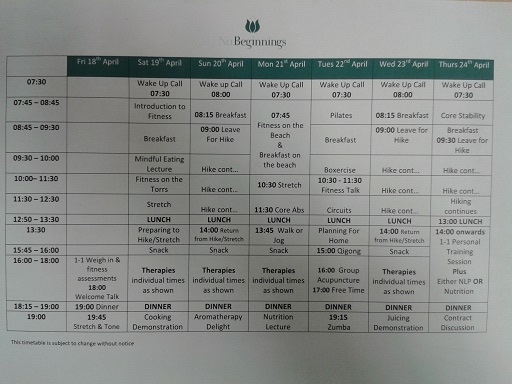 Our schedule for the week

This was the whole idea, explained Victoria to me later. ‘We tell you when to wake up, we tell you what to do, what to wear and what to eat so it all starts to feel normal. You don’t have to think about anything.’ 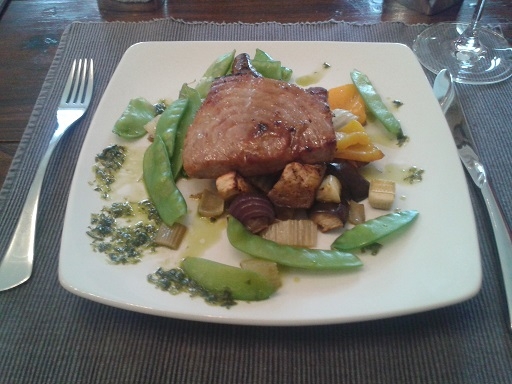 NuBeginnings follows the low-GL or ‘glycaemic load’ diet principles. This meant three main meals a day and then two snacks, mid-morning and mid-afternoon. The morning snack was always an apple and five nuts, while the afternoon choices were much tastier, such as apple and feta slices, or oatcakes with avocado. Dinner could be fish, or a curry, or chicken skewers and was always delicious, particularly as we knew that was all we were going to eat for the next 14 hours. 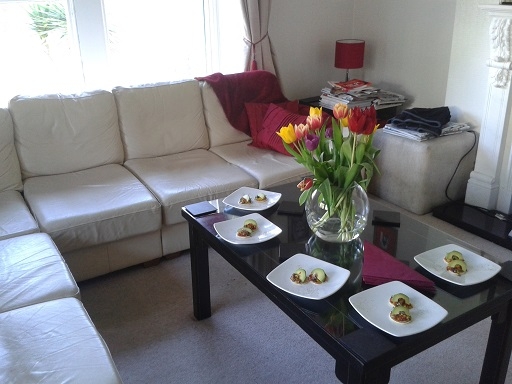 Our mid-morning snacks waiting for us in the lounge

It was certainly eye-opening to discover how easy it was to live on a much smaller amount of food than I normally would, and while I did feel hungry, it wasn’t hard to cope with as you always knew there would be food – either a snack, or a meal – coming up very soon.

Amazingly enough for someone who has a double espresso every morning without fail, I found not drinking caffeine for a week surprisingly easy, drinking instead lots of water and herbal tea. There are no televisions in the rooms either, but the free wifi is good so people could retire to their rooms with their iPads or some made a trip down the hill into town to the local cinema.

One evening we tried acupuncture (we each got an ear-full of tiny pins) and there were also hypnotherapy sessions included, which some people found useful but which didn’t do a great deal for me. 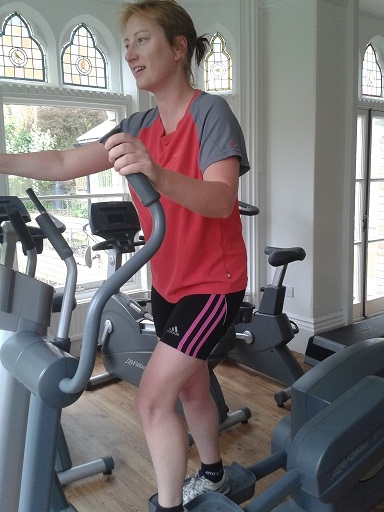 Working out on the cross-trainers in the NuBeginnings’ gym

Results at the end of the week

By the end of the week I was starting to feel stir-crazy but also apprehensive about returning to the real world. Would I start binge-eating the moment I was back in London? NuBeginnings thoughtfully provided us with a packed lunch for the train to help prolong the moment when we had to choose our own food and a recipe booklet and regular emails from the team were supposed to help us readjust.

I had to leave a couple of days early, so was weighed in on Wednesday morning. I’d lost five pounds in five days, 2.5cm off my hips and a massive 7.5cm off my waist  (although this has to be tempered by the fact I was weighed in on the afternoon and weighed in first thing in the morning, when you are arguably lighter). 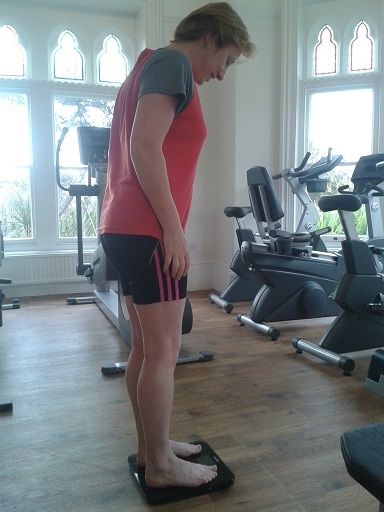 Even taking this into account I did feel really rather pleased with myself, not least because I had started thinking my body had ‘stuck’ at a certain shape and weight and this showed that I could change. The psychological boost to my ego was incredible and my stomach did look considerably flatter than when I’d arrived.

I later found out that Anna had lost three pounds and Julie five over the full week, and we all vowed to try and incorporate as many of the low-GL diet principles as possible: I now snack on almonds rather than chocolate bars, and drink water rather than diet Coke.

If I had been there for longer then I would certainly have lost more weight and indeed the photos and testimonials in the visitors book do show some remarkable transformations. At £500 per pound, it isn’t the cheapest way of doing it but there’s no denying it gets results.

If you’re interested in health and fitness then read these great reviews: Equinox Gym London: super-pricey but it will get you super-fit; A relaxing day at top day spa Nirvana Spa; A spa hotel treat at Ragdale Hall, Leicestershire;