‘Don’t worry, you won’t get a hangover,’ insisted Pleurat Shabani, the maker of Konik’s Tail vodka and the host of our martini marathon. ‘I’ve never had a hangover drinking martinis.’

[Note: this review of drinking martinis at the best hotel bars in London was first published in 2015 and some details might now be out of date]

Visiting the best bars in London for cocktails

I wasn’t convinced – I once gave myself a three-day hangover while trying to perfect the art of making dirty martinis – and while the next day dawned much brighter than it usually did after an epic tasting, a martini headache did kick in at lunchtime. However, it was more than worth it – Pleurat is very entertaining company and the martinis made from Konik’s Tail were sublime, as were the surroundings which were some of the best cocktail bars in London.

Our schedule was simple: a martini at three of London’s top hotel bars for cocktails. We were to start at the Connaught Bar in the Connaught Hotel in Mayfair, continue drinking martinis at Dukes Hotel’s bar in  St James’s and then cross Piccadilly once more to end the evening at Claridge’s hotel bar. 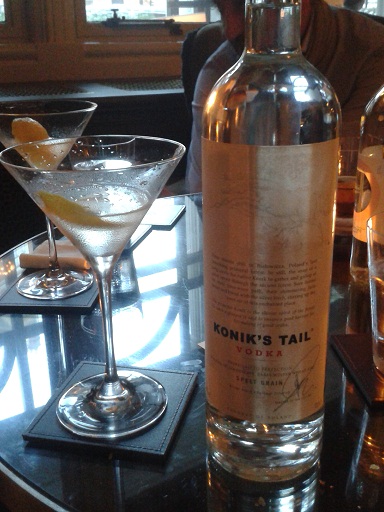 The martinis are all too drinkable…

While we supped our drinks (and I ate a lot of olives), we learned about Pleurat’s almost puritanical approach to his vodka (which is named after the elusive Polish Konik wild horses, which, if spotted, are supposed to herald a good harvest.)

It shouldn’t be mixed – even freezing it, as both Dukes and Claridge’s do, makes him wince – and the idea of a putting Konik’s Tail in a cocktail was practically unthinkable (he was so unimpressed by my love for dirty martinis, which after all just have a touch of olive brine, that I thought it best not to discuss his views on appletinis or vodka and coke…)

In fact Pleurat is nothing if not single-minded: he hates all social media, so instead of swapping twitter handles he carries around an old-fashioned guest book for people to write in; he is reluctant to admit Hugh Laurie (his wife used to be Hugh’s PA) wrote the text for the bottle; and would rather turn down suppliers rather than have his vodka sold too cheaply. 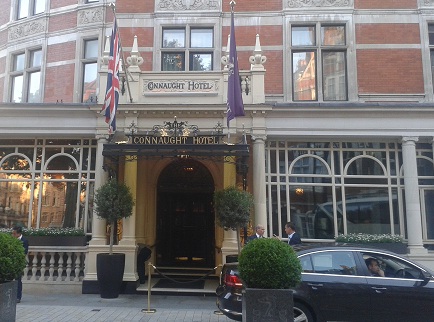 The Connaught hotel in Mayfair, our first bar of the night

So it was a round of ‘straight up, with a twist’ martinis at our first stop, the Connaught, where by coincidence we were sitting at the very same table where Pleurat’s dream of having his vodka served in London’s best bars finally became a reality. Born in Kosovo, Pleurat grew up in Croatia and at the age of 18 headed to London with just 400 Deutschmarks in his pocket. Arriving in Piccadilly Circus straight from Heathrow he worked as a kitchen porter and security guard just to pay his rent before getting a job at the Atlantic bar, moving from glass-collector to bartender, meeting suppliers and becoming a drinks connoisseur. 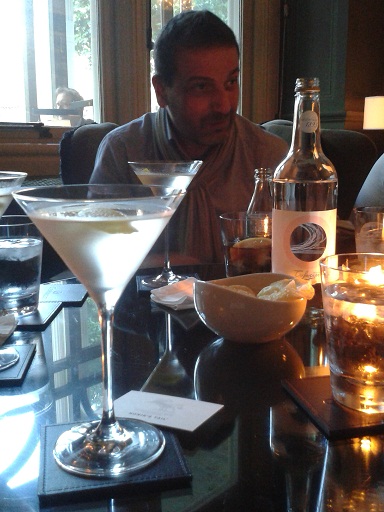 His dream of a premium vodka took shape and after years of research, a loan from family and friends and more than 300 budget flights to Poland, Konik’s Tail was created. Turning down investment from a couple of Dragons and instead going door to door round the type of London bars that he freely admits he couldn’t afford to drink in, Pleurat finally succeeded in convincing the bar manager at the Connaught to take his drink. Now Konik’s Tail is stocked in establishments such as Fortnum and Mason, Harvey Nichols, Selfridges and Nobu and  Street Social. Made from Polish spelt, rye and wheat, the vodka is so smooth, clear and drinkable that it is easy to see why Pleurat doesn’t want other flavours or gimmicks messing it up. 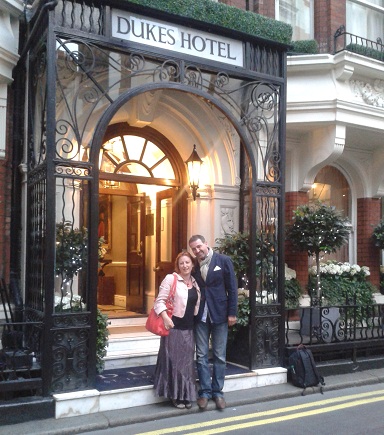 Onto Dukes Hotel for round two…

However I couldn’t pass up the opportunity to try Konik’s Tail in something else so Pleurat rather reluctantly gave his approval to an Oddjob cocktail in Dukes Bar. This cocktail is made from Konik’s Tail infused with saffron, amber vermouth from Sacred Spirits, orange oil and Galliano, served with his usual charm and aplomb by legendary bartender and Bond fan Alessandro Palazzi, recently married after a whirlwind 23-year courtship (he served Konik’s Tail at his wedding).

The bar was busy but Alessandro still had time to discuss one of Dukes most famous fans, Ian Fleming, who used to write in the bar and came up with the Vesper martini while drinking there one day. 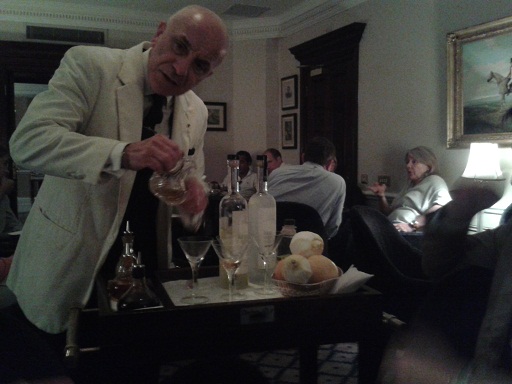 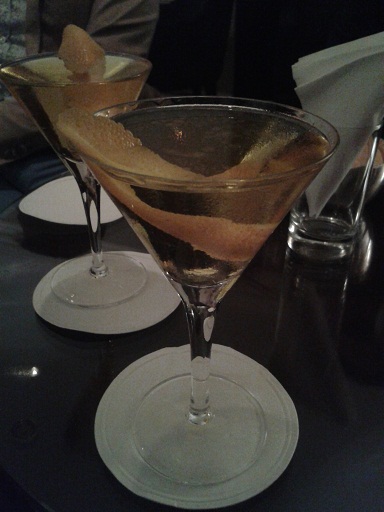 The Oddjob cocktail from Dukes

We reluctantly tore ourselves away and made for the bar at Claridge’s, our final stop of the evening. While we thought we were looking rather sober, all things considered, the staff took one look at us and started plying us with food – firstly a tray of posh sandwiches and then a patisserie-worth of fine cakes.

Thankfully the drinks also arrived: firstly the obligatory martinis – with an atomiser-spritz of vermouth this time. Then, once Pleurat allowed us to depart from the martini theme, I ordered a Flapper cocktail which was fresh strawberries, creme de cassis and champagne, which tasted as fresh and vibrant as it looked. I used to love the bar at Claridge’s for its dark, warm, cosy feel but this time, it felt as if something had changed. 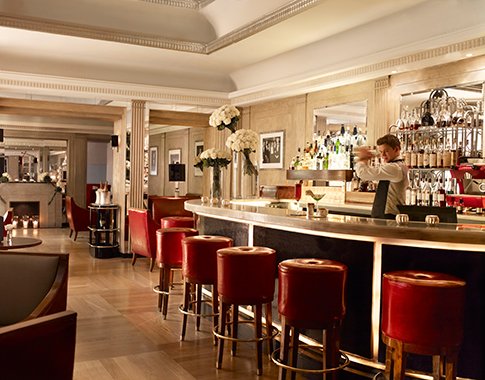 The new-look, lighter bar at Claridge’s (pic courtesy of Claridge’s)

But what was it? I finally realised that they’d changed the floorboard to a light, Ikea-style pine effect, which is sadly not an improvement for such a traditional and classy bar. However things got better with the arrival of our final drinks for the night, the absinthe-based Princess Charlotte, created in honour of the Royal baby. It will be some time before she can enjoy it herself, or indeed any of the cocktails or places we sampled that night, but she is certainly in for a treat.