Berlin is the kind of city where even a seemingly mundane walk to the local supermarket can turn out to be an emotional experience.

It had been 27 years since I was last in Berlin and was here to attend the travel industry trade show ITB. I was staying in an apartment in the ultra-trendy Berlin suburb of Kreuzberg (trendy in a studenty, grungy sort of way, rather than chic or glamorous) and had popped to the Lidl for a pint of milk.

One the other side of the street the grey ordinariness suddenly gave way to a line of modern high-rise apartments and I realised I was standing on land which for thirty years had been covered with nothing but concrete and the forbidding lines of crosses of automatic anti-tank weapons. 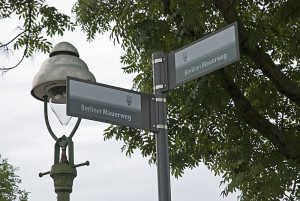 The Berliner Mauerweg. Picture courtesy of Eva K via wikimedia.com

I had first visited as a child with my family and later explored the city as a teenager staying with friends. Like countless others I had been both appalled and fascinated by a city split in two by the Wall, or rather two walls, with the vast expanse of no-man’s land in between.

Memories of my visits are still crystal-clear images in my mind – the sadness of the failed attempts to cross the wall remembered at the museum at Checkpoint Charlie, the silent snipers standing guard high on the roof at Friedrichstrasse, a station located in East Berlin but through which trains on the West Berlin tube network passed, the Church of Reconciliation trapped in between the two Walls (and which was later destroyed, just five years before the Wall came down).

Returning to Berlin was like jumping forwards in time and just as disorientating – all of a sudden the trip for milk became an emotional journey as the route took me from the West to the East, a trip unthinkable for a whole generation.

Extraordinary light installation ‘Lichtgrenze’ planned for the 25th anniversary of the fall of the Berlin Wall. Pic by Daniel Buche from Kulturprojekte Berlin

The trade show turned out to be pretty hellish in my opinion – 25 claustrophobia-inducing exhibition halls packed with people trying to make themselves heard over the din – but one highlight was an extremely moving film showing images of Berlin then and now side by side, with the Wall replaced by hundreds of floating white balloons.

According to Kulturprojekte Berlin, the ‘Litchgrenze’ light installation will follow the former path of the wall through the city centre. It will trace the division of the city over a stretch of approximately 12 kilometers and with about 8,000 illuminated balloons as an impressive installation in Berlin from 8 to 9 November, 2014.

Watching the bleak, grey, forbidding Wall turn into a line of light was an incredible piece of footage. The city now is gearing up for a whole array of celebrations to mark the 25 years since the Wall came down later – although celebrate doesn’t seem to be the right word for a such a bittersweet anniversary. But one positive legacy of such a literally divisive entity is the emergence of an incredibly lively, vibrant, diverse and fascinating city.

If you love incredible destinations then you’ll love these other reviews: