Home / Fitness and weight-loss / After the Fast Diet, there’s Fast Exercise, but aren’t we missing something? 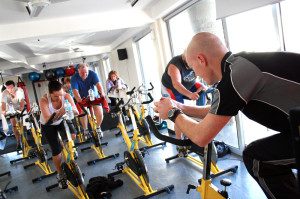 There’s nothing more than the fitness industry loves than the newest fad, the latest trend, the ‘next big thing’.

It guarantees column inches in newspaper supplements and magazines as the new idea is relentlessly promoted in books and articles by its creators. It is then even more relentlessly plugged by the bandwagon-jumpers who can spot a new trend at fifty lunges and launch their own versions of the so-called big idea.

Then fitness chains start offering classes and then there’s the DVDs, the music, the accessories and then of course, the backlash as everyone starts to wonder whether it was such a great idea in the first place and we all go back to whatever kind of exercise we were doing before and actually secretly much preferred (even if is it sitting on the sofa watching repeats of The Biggest Loser.)

From Reebok step to spinning, Pilates to Zumba, every few years there comes along a supposedly revolutionary idea which will transform the way we approach the idea of getting fit.

And the latest supertrend is finally here – hurrah! HIT (high intensity training) also known as HIIT (high intensity interval training), or Fast exercise (by the doctor-journalist who brought you the Fast Diet) is the new exercise fad of early 2014 and – here I am, getting the backlash in early – I think it is completely and utterly missing the point of what exercise is and why we do it.

‘Get fit in just four minutes a day!’ screams one headline. ‘Get fit from just 12 minutes a week!’ shouts another. The claims get higher as the time gets lower: ‘Three minutes of exercise a week will get you fit!’ hollers another article, totally improbably. It seems that the fitness industry is engaged in some kind of limbo-dancing contest where the lower you go, the better.

This, surely, is madness. Now I’m not saying that the ‘traditional’ ways of working out – such as hours plodding away on treadmill – aren’t ripe for updating or even ditching altogether. That kind of exercise is no good to your body or your soul. We’ve all seen the usually rather tubby person in the gym who sits reading while on the recumbent bike for over an hour, turning the pages of the magazine faster than their feet are turning the wheels around, and who will no doubt leave the gym patting themselves on the back for having worked out for 90 minutes and then go off an reward themselves with a beer and a pizza. And wonder why they never lose any weight.

But the concept of exercise as just something to be got out of the way as quickly as possible so you can then go and get on with the rest of your life – presumably, the more important bits of your life – just seems to be all wrong.

‘It burns more fat than conventional exercise and best of all it’s over in less time than it takes to drive to the gym,’ says Dr Mosley, co-author of Fast Exercise.

That’s a good thing is it? Now I’m not saying we all have unlimited time to exercise, but surely the main point of exercise is that it’s fun, surely? Else we would just be spending hours of our lives doing something we hate, and that is the just the saddest thing I can think of.

I’m not saying everyone likes going to the gym either, but there is more to staying active and healthy than being a gym bunny. A walk in the park is exercise – so do that, rather than four minutes of squats in your front room. It’s free, you can do it with friends, chatting and laughing, and providing it’s not hailing, it’s extremely enjoyable. Getting out and about means lots of good things happen to you – you get fresh air, sunlight (if you’re lucky), you’re out of the house or the office and best of all you have time to chat or to think. Just to ‘be’.

If you rush through your exercise in four minutes a week, what exactly is it that you’re rushing back to? The office? Your BlackBerry? The latest episode of NCIS: Miami? Surely spending more time being outdoors and active would be preferable in that case, not less?

Time spent exercising is time away from work, away from pressure, giving you time to think, switch off, or think about something completely different, such as where the next hill is or how delicious that post-run drink will taste.

It can be social too – don’t tell me that four minutes of shuttle runs across a fitness studio is more fun than a kickabout in the park with friends, or playing hide and seek with your children, or chasing leaves blown across the park on a windy day. Exercise should be part of our everyday lives, whether it’s just walking to work instead of getting the bus, or getting off a tube stop earlier on the way home, or ambling round the local park at lunchtime. It shouldn’t be something to just be ‘got over with’ in a matter of minutes.

And who’s going to be interested in this kind of fitness fad? Unfit, inactive people are not going to be the slightest bit interested and that’s probably a good thing. Ploughing away on a rowing machine at breakneck speed will probably put them off any future exercise ever, that’s if they don’t do themselves a serious injury first.

And people who are fit enough to get the most benefit of this kind of exercise are going to feel somewhat cheated if they are forking out for a gym membership but only using it for four minutes a week. And their valuable ‘me-time’, that post-work hour at the gym or fitness class or running home from work – they’re not going to want to give up those de-stressing, decompression-from-work moments, because how much switching off from the days grind can you do in four minutes?

A weekend bike ride might take hours but that’s the point, surely? Those hours spent exploring the countryside, finding hidden roads and pubs to treasure – you won’t have that kind of fun in just four minutes a week in your front room.

There are so many more benefits to exercise than purely getting your heart-rate going, and to miss out on all those just so you can ‘get fit in the time it takes to change into your gym clothes.’

And miss out on all the fun? No thanks.

If you love exercise but also love relaxing spa breaks then you have to check out these great exclusive reviews:

Equinox gym London: super-pricey but it will get you super-fit

A most relaxing stay at Ragdale Hall spa in Leicestershire